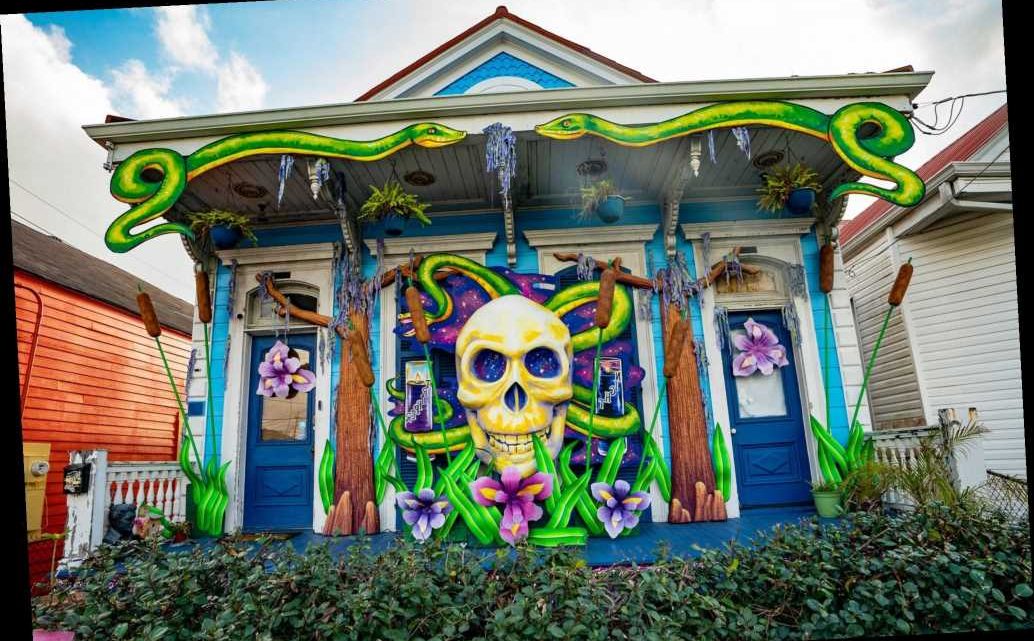 Despite logistical hurdles this year amid the ongoing COVID-19 crisis, New Orleans residents are still letting the good times roll this carnival season.

After Mayor LaToya Cantrell announced last November that Mardi Gras parades were canceled, the locals decided to take matters into their own hands, decorating their homes to look like the flamboyant floats — all designed by different collectives known as krewes — that make up the many parades over the Mardi Gras season.

These so-called "house floats" were an idea resident Megan Joy Boudreaux first joked about back in November with a tweet that read, in part, "Turn your house into a float and throw all the beads from your attic at your neighbors walking by. #mardigras2021."

Since then, Boudreaux has created the Krewe of House Floats, which she recently told The New York Post has become "a second full-time job" for her. Just like the floats in the parades, each house boasts a different theme, from the circus to A Midsummer Night's Dream to the late New Orleans jazz legend Dr. John and more. Some neighborhoods even have bigger themes going, with everyone on the block getting into the spirit of the season.

Boudreaux's initiative — and her accompanying Facebook group for the krewe, which boasts more than 12,000 members — inspired artist Caroline Thomas, who designs floats for the 19th-century-founded Krewe of Proteus and Krewe of Rex (the latter of which usually runs its parade on Mardi Gras day), to launch a service called Hire a Mardi Gras Artist.

Through the service, organized by the Krewe of Red Beans, artists have been able to to turn donors' homes into carnival-worthy abodes, which takes about two weeks per house. Through crowdfunded lotteries, they've raised enough money to decorate 11 homes, on top of separately commissioned work, and seven businesses, including the iconic Commander's Palace restaurant in the heart of the Garden District.

"You can't imagine New Orleans without the float builders," Krewe of Red Beans founder Devin de Wulf told Atlas Obscura of the dozens of people working on the decorations. "We have to step up and create work for them."

The Krewe of House Floats website asks that homes be decorated by Feb. 1, when the map of the different houses participating will be released.

"I know a lot of folks are sad and disappointed that Mardi Gras cannot be normal this year, but I am hoping that Krewe of House Floats can be a way for folks to channel their creative energy, make something positive out of a bad situation, and have something to look forward to in 2021," reads a message from Boudreaux on the site.

"This is really about coming up with creative ways to celebrate carnival that keep everyone safe until we can get through to the other side of this pandemic," she adds.

Last week, the Krewe of House Floats also announced "a giving campaign to raise $100,000 for those affected by COVID-19 restrictions and Mardi Gras event cancellations, with Culture Aid NOLA and Grace at the Greenlight as the first partners for the initiative."

"The magic of Carnival, while often billed as the 'Greatest Free Show on Earth,' isn't possible without float artisans, service industry workers, musicians, Mardi Gras Indians and other culture bearers," the release continued. "Donations to the KoHF campaign are completely tax-deductible through a partnership with the Greater New Orleans Foundation."

This will be the first time in over 40 years that the streets of New Orleans don't host a series of Mardi Gras parades leading up to Fat Tuesday, which falls on Feb. 16 this year.

Earlier this month, Hoda Kotb announced on the Today show that she would be hosting a virtual event titled Mardi Gras for All Y'all. Beginning Feb. 12, the three-night celebration will stream on NOLA.com and theadvocate.com, as well as YouTube and Facebook Live, featuring performances, interviews and behind-the-scenes segments of the festivities.

"I'm just pumped up about it," said Kotb, 56. "I mean, Mardi Gras actually happened at the very start of the pandemic [last year], remember? Right around then was when the pandemic started and we didn't want to say goodbye to it."

The longtime news anchor (who has close ties to New Orleans, as she worked for the city's WWL-TV news station from 1992 to 1998) continued, "Just watch — we're gonna make everybody happy!"

As information about the coronavirus pandemic rapidly changes, PEOPLE is committed to providing the most recent data in our coverage. Some of the information in this story may have changed after publication. For the latest on COVID-19, readers are encouraged to use online resources from CDC, WHO, and local public health departments. PEOPLE has partnered with GoFundMe to raise money for the COVID-19 Relief Fund, a GoFundMe.org fundraiser to support everything from frontline responders to families in need, as well as organizations helping communities. For more information or to donate, click here.

The largest jail in Texas is nearing capacity. Experts warn it could become a hotbed for COVID-19.
Entertainment