On Nantucket, stilettos and valet parking have become the norm, along with other signifiers of the immense wealth now summering on the New England island. As Marianne Stanton, the native-born editor of the Inquirer and Mirror (est. 1821), recently opined, the place “has become way too fancy.”

My husband and I bought our rather plain house two decades ago, and while we may not live quite as austerely as the Quakers who built up this island, I’ve developed workarounds to enjoy the island’s built-in bounties at minimal cost. Here are a few:

Ferrying a car over from Hyannis (about $450-$500 round-trip, in the high season) is not only unnecessary but annoying: The island already has enough cars to ensure summer-long gridlock. Instead, rent a bike from Young’s (est. 1931) right by the Steamship dock or bring your own for a $14 surcharge on the ferry. Round-trip passenger rates in summer are $69 for the hourlong fast ferry, $37 for the two-hour-and-15-minute “traditional” (a.k.a. slow) ferry, which is preferable in any case for its sunbathing opportunities and slow-unfolding views.

Bike paths fan out across the island, to the southern coast (popular Surfside is an easy jaunt, only 3.5 miles) and to the east and western tips (adorable Sconset, with its rose-choked cottages, and sunset-friendly Madaket, 8 and 6 miles, respectively).

If you’re not up for long-distance cycling, catch The Wave, a network of low-cost (under $3) public buses — with bike racks — fanning out from the Greenhound transportation hub in downtown Nantucket. Those traveling heavy or with youngsters in tow can hop a taxi at the dock (rates are set by zone, $11 to $30; you can add passengers at $2 each), and most bike rental shops will deliver right to your door.

Also, if the land-and-sea schlep sounds daunting, you could always fly. Jet Blue offers some astoundingly low rates, provided you travel against the weekend flow. Midweek flights from New York City (only an hour!) start as low as $55.

Nantucket boasts some 900 visitor beds, ranging from $175 per night for a single (sans bath) at the Periwinkle to $650 or more for a double at the ultra-luxurious White Elephant hotel. But do not despair: Nantucket has a fantastic hostel — a creatively repurposed 1873 lifesaving station — right on Surfside Beach. It books up rapidly in summer, but you might score a spare bunk or grab a five-bed group/family room ($45 to $250 per night). Airbnb has also made inroads: We have several friends who use their nicely accoutered yet affordable spare rooms to bankroll exotic off-season journeys. Camping is strictly forbidden, so if you intend to spend the night, definitely secure lodging before heading over. 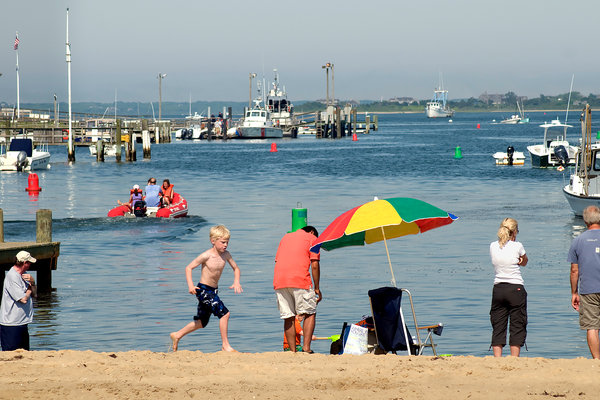 Nantucket is all beach, and in contrast to its archrival, Martha’s Vineyard, nearly 100 percent of its roughly 80-mile shoreline, though privately owned, is open to the public. There’s no fee for parking. Just pick one of a score of designated access points (Visitor Services has a handy map) and head out. Families with young children might prefer the bay side, with its gentle waves; adventurous types the ocean with its big rollers.

Our general strategy is to pair cheap eats (ideally, under $10 per person) with the day’s beach destination. En route to the Children’s Beach playground, for instance, we’ll pick up a brown rice wrap at Cook’s Café ($8.50). The Sandbar at Jetties Beach is perfect for toes-in-the-sand, buck-a-shuck oysters during happy hour (3 to 5 p.m.). Dionis Beach requires a two-fisted sandwich stop, before or after, at Something Natural, known for its home-baked bread. Ladies Beach usually entails some Millie’s Food Truck treats (Mexican street corn, blackened redfish tacos) at Cisco Brewers, plus a homebound raid at the sophisticated market within seventh-generation Bartlett’s Farm. Sconset means a meatloaf-and-mayo sandwich on the tiny porch at Claudette’s. Also, atmosphere may be lacking, but the island does have two large Stop & Shop grocery stores, in-town and mid-island, for home cooks.

Nantucket harbors a score of restaurants that easily match, both quality- and price-wise, Manhattan’s finest. Culinary bargain-hunters should follow the “Restaurant Specials” listings in “Mahon about Town,” a free e-newsletter published by Gene Mahon, a society-photographer who “washed ashore” as part of the 1960s hippie influx. He also lists cultural events.

With Gene’s listings and those in the I&M newspaper, a multigenerational dance card fills up fast.

By day, Cisco Brewers (about two miles southwest of town) doubles as a complimentary open-air cabaret, hosting local bands like the “cowpunky country” sextet Buckle and Shake, and the puppeteer Lizza Obremski. She also performs in the garden of the venerable Nantucket Atheneum (site of free lectures since 1834) and at the Parks & Rec performance shed at Children’s Beach, where family-friendly films screen Friday nights, and Sunday evenings showcase local bands, such as Roma-inflected Coq au Vin (all free events).

Art-lovers and noshers alike look forward to the traditional Friday evening “gallery stroll,” when a dozen or so art galleries entice with wine and hors d’oeuvres.

Many bars on the island — such as the Gaslight, which until recently served as a minuscule movie theater — throw in a folk singer or contemporary ensemble with the price of a cocktail. A loyal cadre flocks to Sconset’s Summer House to sing along with pianist (and Grammy-winning soundtrack restorer) Jamie Howarth.

That is, as long as you patronize two commendable charitable enterprises. The Nantucket Hospital Thrift Shop, right in town, raises hundreds of thousands of dollars every year off top-drawer hand-me-downs, and the Seconds Shop, mid-island, supports the Fairwinds counseling center. (True, Nantucket has its own Ralph Lauren and Lilly Pulitzer shops, but it’s easy to find their good-as-new output for a fraction of the price.) For some of us, the weekend yard sales listed in the Inky classifieds constitute a religious ritual. As for the recherché shops clustered in town? Consider them free entertainment.

Hold off until the shoulder season

The smart money is on waiting post-Labor Day, when the summer hordes have headed off, leaving in their wake drastically reduced room rates, alluring sales at the envy-inducing shops, plus a good six weeks of temperate weather and Gulf Stream-warmed (relatively speaking) waters. The moors start to morph scarlet and gold, and you can stride across them without meeting a soul. There is nary a stiletto in sight.

52 PLACES AND MUCH, MUCH MORE Follow our 52 Places traveler, Sebastian Modak, on Instagram as he travels the world, and discover more Travel coverage by following us on Twitter and Facebook. And sign up for our Travel Dispatch newsletter: Each week you’ll receive tips on traveling smarter, stories on hot destinations and access to photos from all over the world.

Gift of the garb: the tweaks behind Kate Middleton's high fashion makeover

What Does Putin Really Want?
Entertainment