The issue of food scarcity in Los Angeles is often overlooked, but food activist and SÜPRMARKT founder Olympia Auset wants to change that.

Auset, who is a South Central Los Angeles native and alum of Howard University, launched the pop-up grocery concept SÜPRMARKT back in 2016. She came up with the idea after growing tired of seeing her loved ones and community members—often Black or people of color—go too soon. And after years of taking multiple busses across the city to buy fresh fruits and vegetables, Auset realized that her community’s health was suffering due to a lack of fresh resources, and she needed to do something about it.

“I was living somewhere where I would be on the bus two hours every time I needed food, and because I was an adult, it became very clear to me that if I didn’t do something, that I would be going to my friends’ funerals, who were turning 40 and 50, and people in my life are starting to pass away,” Auset tells BAZAAR.com. “When you’re a child, you kind of don’t notice the impact of living in a food desert, but as an adult—I had also been vegan for I think, like, eight years at that time—it had just become very clear. I have to leave and go on a long mission every time I just need an avocado or anything fresh. That was the impetus.”

Conceptualizing SÜPRMARKT was a way for Auset to give her community better food access while educating them on the impact fresh food can have on their overall health and livelihoods. In the four years since its launch, SÜPRMARKT has already provided more than 70,000 pounds of fresh produce to the community. But first, Auset started off small.

Auset explains that the immediate reaction from her community was one of gratitude—along with an eagerness and willingness to head out week after week to purchase fresh produce. The market quickly evolved from a DIY pop-up to a weekly fixture within the community, where Auset and her team provided affordable organic food, accepted EBT (which is a card designated for nutritional assistance), and later produced a subscription service that allowed for their produce to be picked up or delivered. 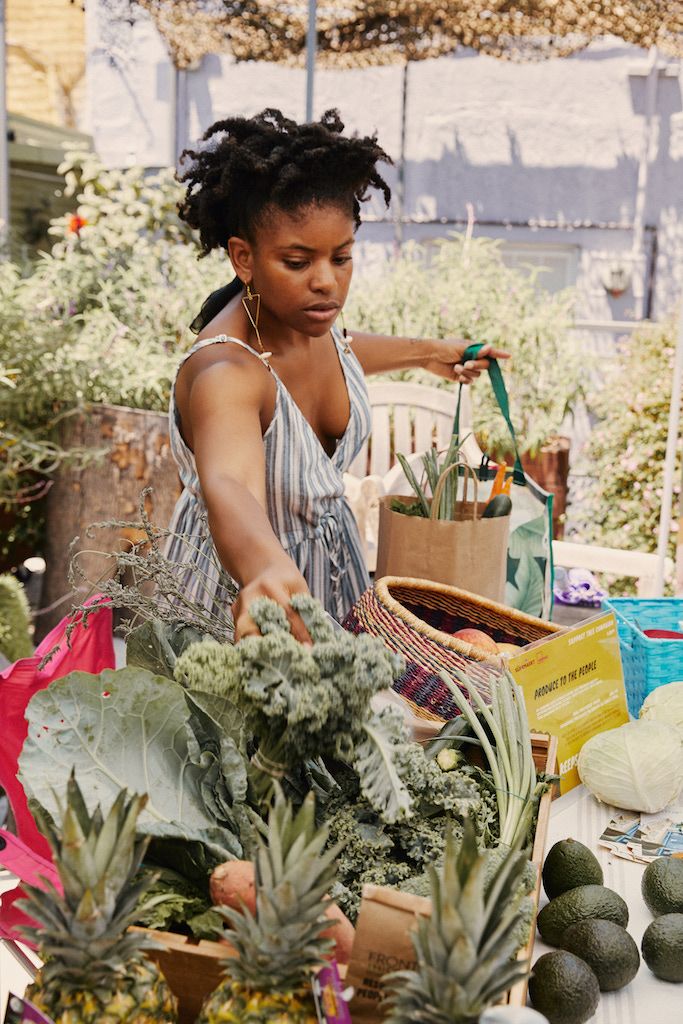 “People were very grateful and excited. We didn’t have much to start with, so we bought whatever produce we could. Some of it was like seconds, where there might’ve been bruises on the apples and stuff like that, but people still came out and bought everything we had,” says Auset. “The area we serve is South Central—it has 1.3 million people and only 60 grocery stores. So imagine going 20 or 30 years, your whole life, all the time having to travel outside of your neighborhood for fresh food. There’s a lot of low-income residents, but it’s also adjacent to higher-income Black neighborhoods. So there are people that are well off in those communities, but they’re still having to leave their neighborhoods to get fresh food. We were kind of surprised by how happy people were, doing what we felt was a small thing at the time.”

Auset doesn’t describe the situation in South L.A. as a food desert, but rather a “food apartheid.” She coined the phrase because deserts are natural-occurring environments, whereas an apartheid is directly intentioned and purposeful, much like the lack of grocery options in Black and Brown neighborhoods.

“To use the word desert, it means in spite of people and myself, something is naturally occurring. It makes you feel, ‘Oh, it’s natural that there are poor people. It’s natural that there are places where there is food and where there is not food.’ It also makes it seem as if there’s nothing you can do about it,” says Auset. “I really want people to understand that this is a life-or-death situation. Living in South Central makes you three times as likely to die from a preventable disease. It’s a slow form of genocide that’s being rendered onto certain people in this country. It’s a problem that doesn’t have to exist. Every single day, we spend a billion dollars in this country on preventable diseases that could be prevented through fresh fruits and vegetables. There’s people dying every year that really don’t have to die.” 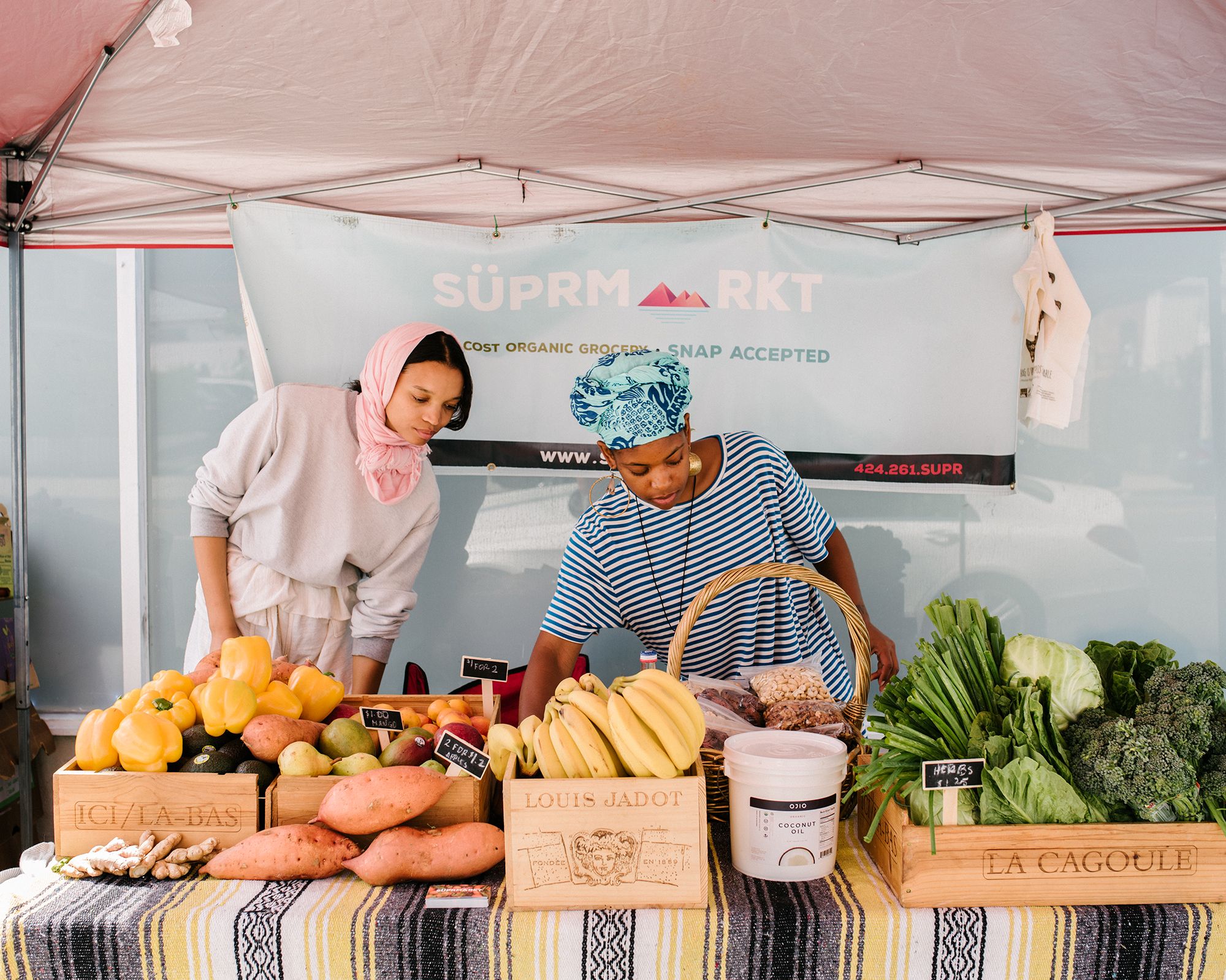 Though the ongoing pandemic has forced Auset to pivot the management of SÜPRMARKT (they’ve since paused in-person markets and are focusing on their pickup and delivery services for the time being), her plans for expansion have only grown. Currently, Auset and her team are promoting and raising funds for their #KeepSlausonFresh campaign, an initiative that aims to open the area’s first all-organic grocery store and fulfill their goal of serving a thousand people a week come 2022, as well as becoming an official nonprofit.

“We know once we have a team and have the proper resources, as a nonprofit we’ll be able to really amplify our impact and make it so that everyone everywhere knows how to make culturally relevant, healthy, delicious food, no matter what their budget is,” says Auset. “We do hope to expand to other cities, because everything we’re doing right now is establishing our brick-and-mortar, which will actually be [South Central’s] first-ever full-service organic grocery, and we’re hoping to open in February 2021. … Once we’re able to eat really well in Los Angeles, and sort out our model, we will easily be able to help others and address this nationwide issue.”