We’ve got a great idea: Experience the delights of this London hotel – it offers top service, grand views and looks good enough for the big screen (you may recognise it from The Italian Job)

The lofty Park Suite in the towering Royal Lancaster London hotel has two stonking great TVs (one in the living area, another in the master bedroom). I didn’t watch either of them because I was transfixed with the panorama of a faraway storm. Through my wraparound wall of windows on the 13th floor of this 20-storey five-star hotel, I could track the storm moving from west to east. Rain, I saw from one end of the long suite, was hammering Chiswick.

Kneeling on a velvet sofa, I focussed on the haze that meant sheet rain was falling from bruised clouds two or so miles away. I watched the slanting rain move through to Chelsea before I switched to another sofa (a 55-square-metre suite has room for several sofas) to monitor the storm’s progress from the stretch of windows that extends the length of the recently revamped 1960s tower block. The London Eye disappeared under the yellow-grey clouds and, as it reappeared, distinctive skyscrapers overlooking the City were swallowed in turn.

Thirteen floors below me, the silver waters of the raised ponds in Hyde Park’s Victorian-era Italian Gardens were undisturbed – no rain nearby, then. I moved to the main bedroom to continue tracking the distant storm’s progress. A large expanse of windows in front of me were complemented by a similar stretch to my right. Boxed-out mirrors in the corners added room-expanding reflections to the endless views. 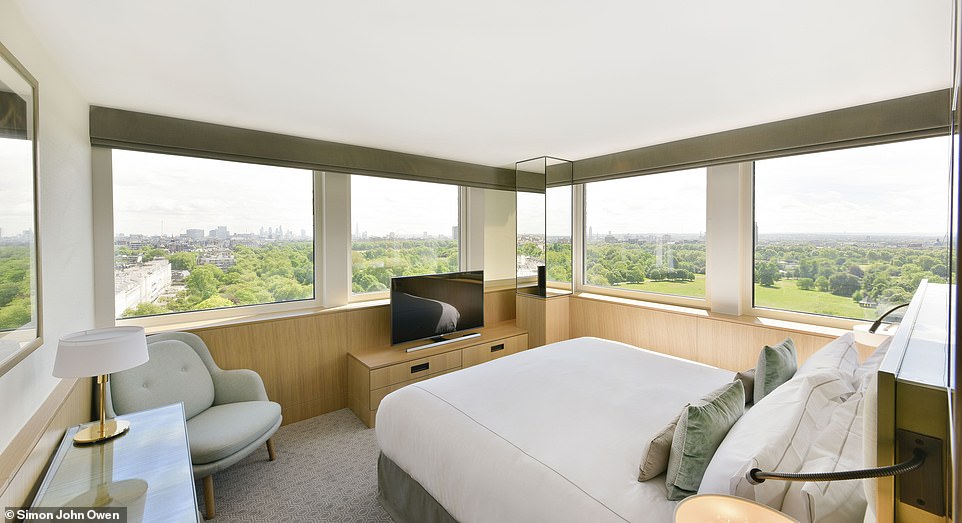 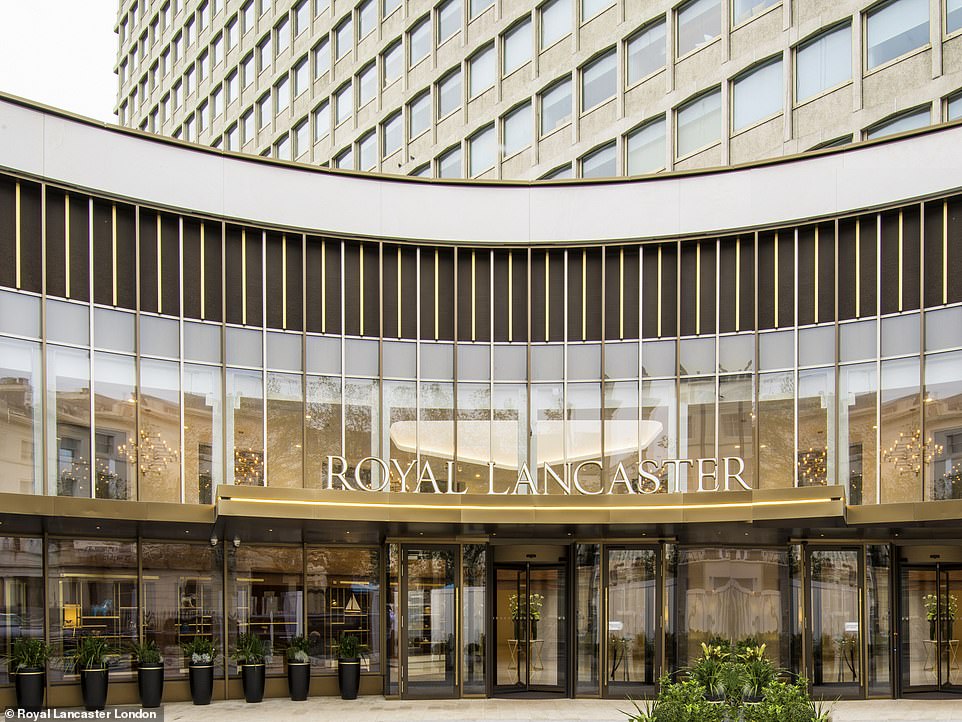 ‘All of the hotel’s 411 guestrooms and suites have views across London,’ Carlton reveals

This suite is just perfect for high-level gawping.

I arrived early and left late the next day, never tiring of the view. Or, to be more accurate, ‘views’ – because walking through the suite rewards you with a moving 180-degree vista of London’s famous skyline. The bathroom has a view over the Italian Gardens and the Serpentine and onto the Albert Hall and beyond (teeth brushing has never been so scenic). The master bedroom has expansive views of wooded Hyde Park from one angle and then the London Eye and the Shard skyscraper from another. Swivel to the left and there’s the priapic BT Tower.

The hotel is a vertical slab with no other high buildings nearby. And as it’s not overlooked it’s perfectly possible — after a soak in the suite-with-a-view’s bathtub, say — to wander the much-windowed suite butt naked. 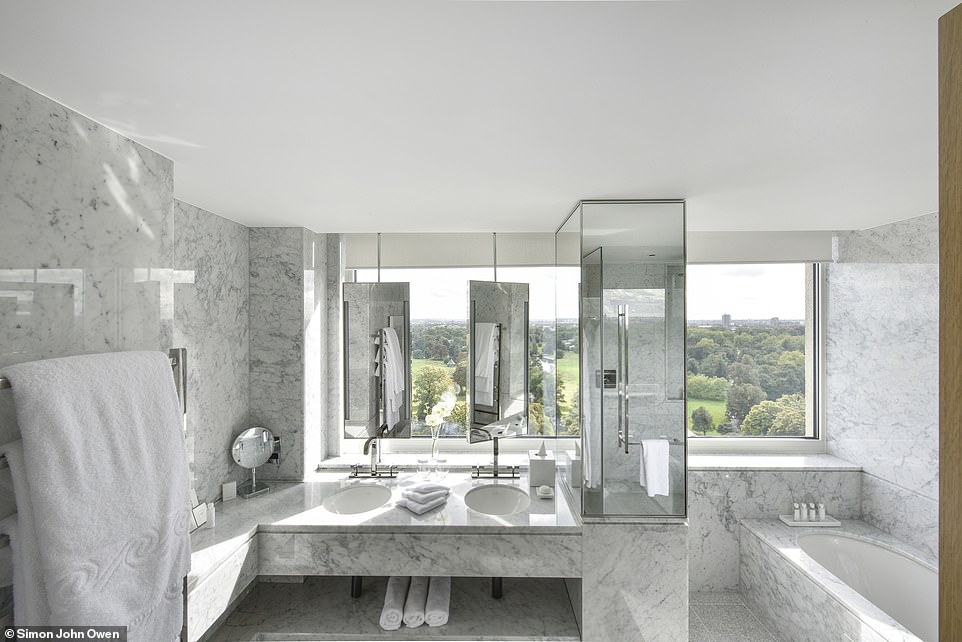 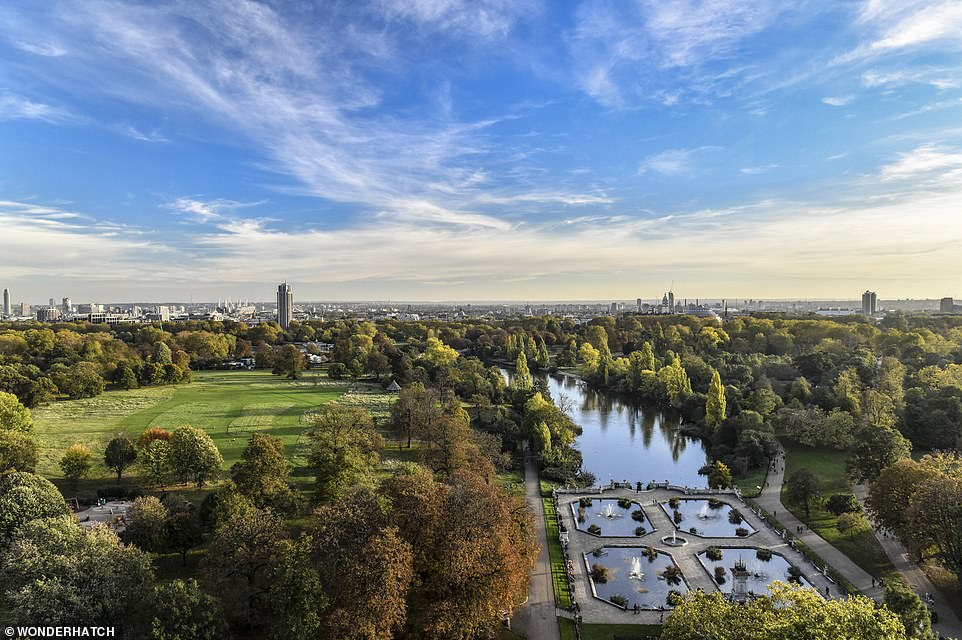 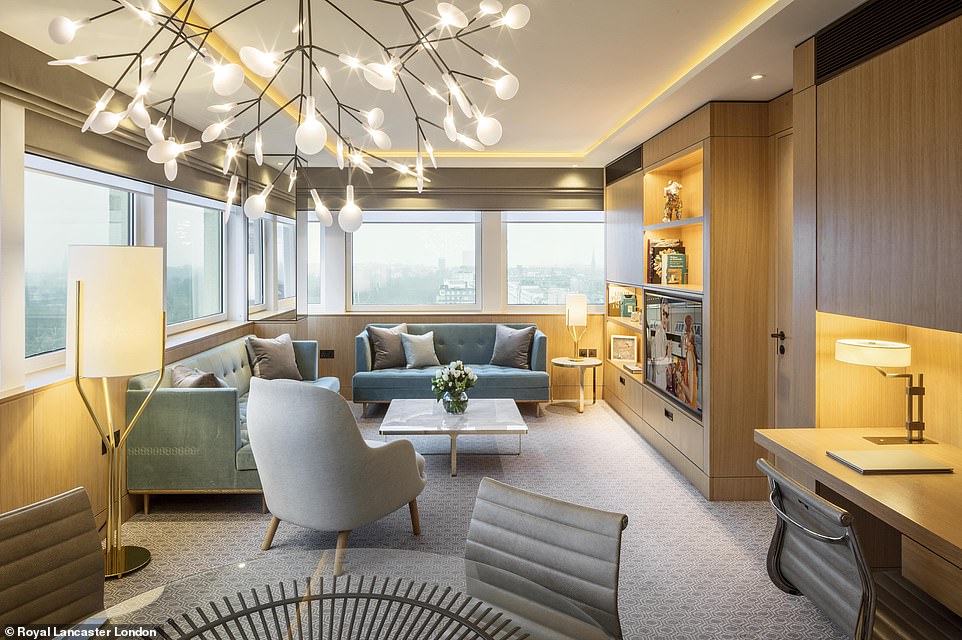 ‘This suite is just perfect for high-level gawping,’ Carlton says of the Park Suite

Spectacular views over the green expanse of Hyde Park fool you into thinking you’re far removed from the city’s hustle and bustle, yet it’s just a five-minute walk to Marble Arch and then on to Oxford Street. (Don’t want to walk? The Lancaster Gate underground station is on the same block as the hotel.)

Two hundred and twenty years ago, William Wordsworth immortalised London’s skyline in a poem praising the capital’s ‘towers, domes, theatres, and temples’, concluding that ‘Earth has not any thing to show more fair’. As I reclined on a king-sized bed, wrapped in a fluffy white robe, drinking complimentary English bubbly and still watching the storm as it fizzed east, I could only but agree with the daffodil fella.

And the fantastic views aren’t just for those able to afford the £1,300-a-night suites. All of the hotel’s 411 guestrooms and suites have views across London. Some are more commanding than others, of course, with the suites — including an even larger Royal one — having the greatest acreage of upper-storey glass.

As the light faded, I tore myself away from the still-bruised clouds and looked down to the road. On a flat roof, eleven floors below, were ten beehives. A vinyl banner told me this was the hotel’s honey farm. Sweet.

‘Bees can fly up to three miles from their hives,’ the hotel’s Jo Hemesley told me over a cup of tea in the Royal Lancaster’s ground floor cafe, ‘but I expect ours mostly forage in Hyde Park.’ 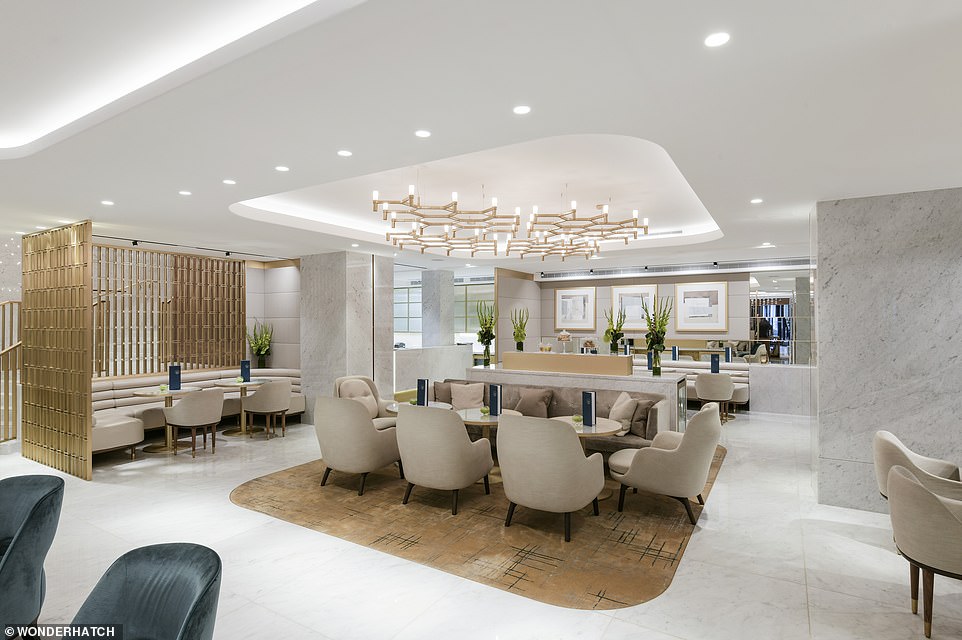 Carlton enjoyed a cup of tea in the Royal Lancaster’s ground-floor cafe, pictured

‘Hyde Park now has lots of grasses left to grow long, interspersed with meadow flowers, and there are patches of ground covered in clover, so I suppose that’s where the bees go,’ she said, adding that the hotel’s bees also frequent the nearby lime trees.

Honeycomb from the rooftop honey farm is served at the hotel’s breakfast, the restaurant being just metres below the hives. 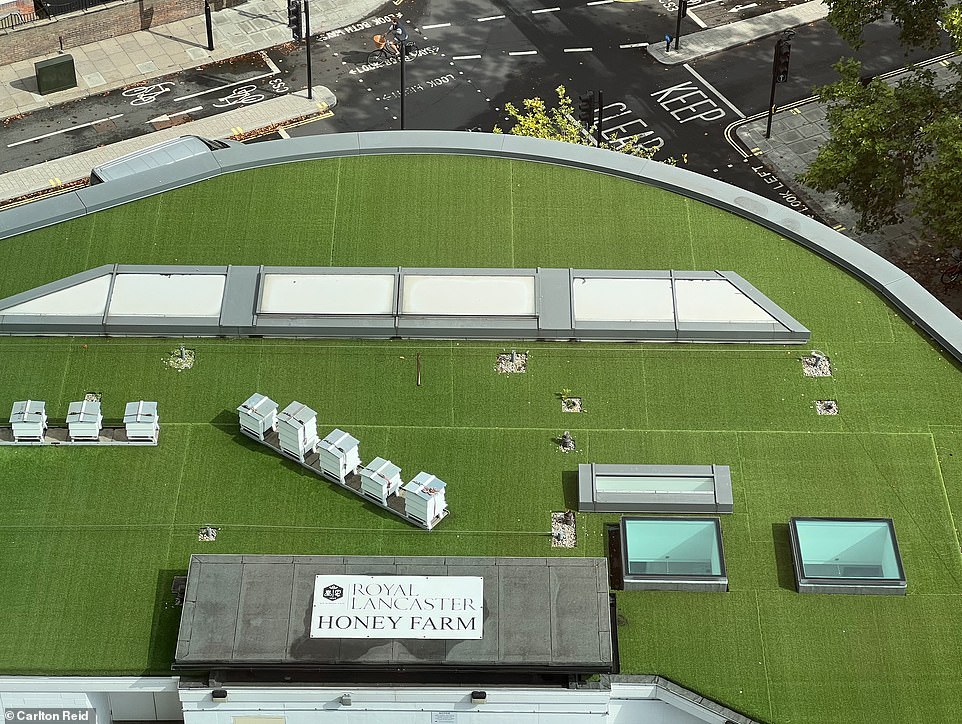 From his room, Carlton could see the hotel’s honey farm. The Royal Lancaster’s head beekeeper told him that the bees frequent Hyde Park and the nearby lime trees 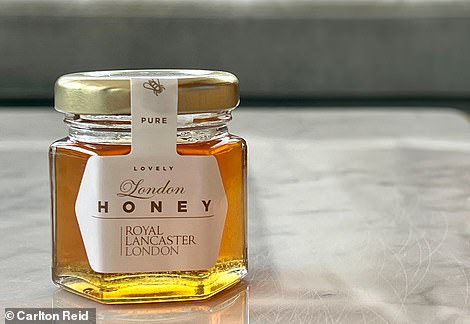 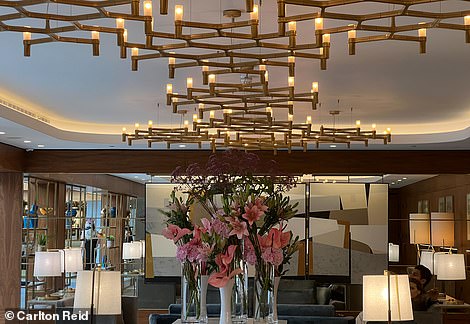 ‘I extract the honey from the honeycomb for the little jars we present to guests,’ continued Jo.

‘And have you noticed the honeycomb shapes used in designs around the hotel?’ she asked.

I hadn’t, but my eyes were soon attuned to them: there are honeycomb-shaped brass chandeliers in the foyer, there’s a bee on the hotel’s logo and, as I found out later, the Park Lounge bar serves a Honey Bee Mine cocktail (this is ginger beer sweetened with the hotel’s honey plus plugs of peach purée, lemon juice, and more ginger). 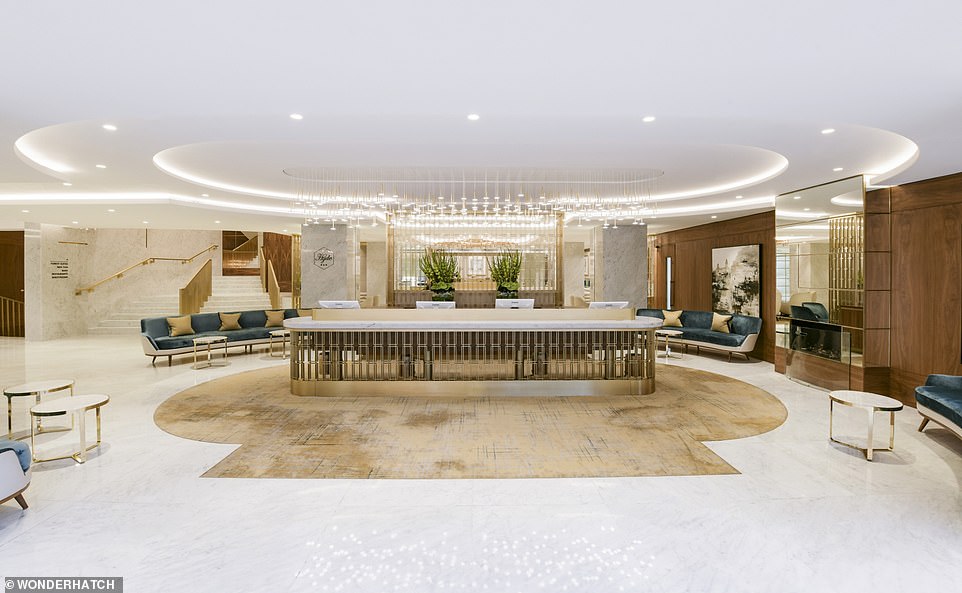 ‘Five-star hotels tend to attract the cream of the hospitality world, but still, I felt those at the Royal Lancaster went above and beyond,’ Carlton remarks. Above is the hotel’s lobby 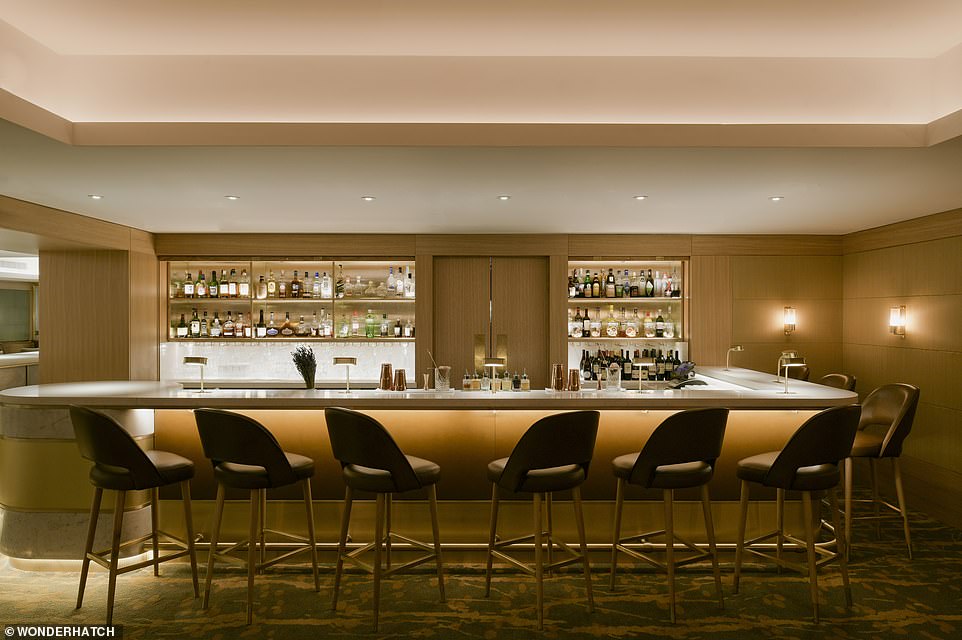 Another of the hotel’s signature cocktails — a gin-and-Campari blend — is The Italian Job, a nod not to the ornate Italian Gardens opposite but rather to the famous 1969 film starring Sir Michael Caine.

Key scenes for this movie were filmed in summer 1968 at the Royal Lancaster when it was then just a year old. Caine’s character — Charlie Croker — drove an Aston Martin DB4 convertible down the hotel’s concrete parking ramp and up to the hotel’s front doors. (The driving was done by a stand-in as Caine couldn’t drive then.)

With the help of hotel doorman Dimitar Dimov, I recreated this iconic scene for a short video. Not having an Aston Martin to hand, I used one of the hotel’s rental bicycles. The hotel’s exterior has had several refreshes since the swinging sixties but the parking ramp hasn’t changed.

Key scenes for The Italian Job, starring Michael Caine, were filmed at the Royal Lancaster in the summer of 1968. Above is the scene where Caine’s character drove an Aston Martin DB4 convertible up to the hotel’s front doors

After I’d finished filming and handed back the bike, I chatted with Dimitar, who had kept the ramp clear for me as best he could.

Dimitar is from Bulgaria and has worked for the Royal Lancaster London for the six years he’s been in the UK. Full of smiles, nothing was too much trouble for him. This ethos of kindliness was shared by other staffers I met.

Yes, five-star hotels tend to attract the cream of the hospitality world, but still, I felt those at the Royal Lancaster went above and beyond, perhaps because of the hotel’s long ownership by a Thai family business. 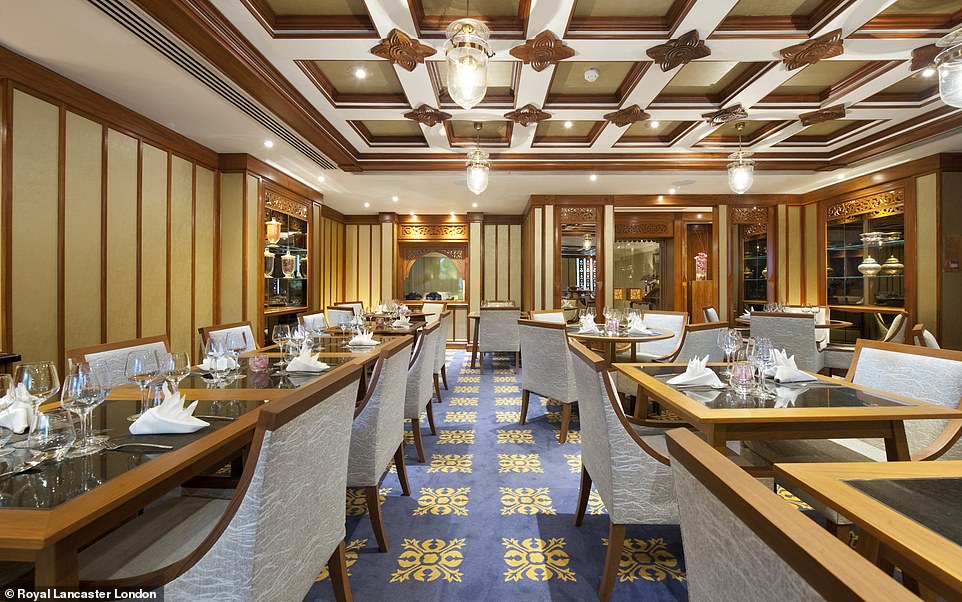 Pictured is Nipa Thai, the hotel’s Thai restaurant, which opened its doors in 1994 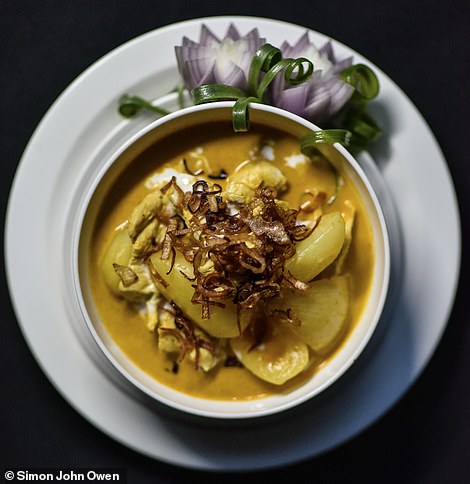 A dish from Nipa Thai, prepared by its all-women team of chefs

Nipa Thai, the hotel’s Thai restaurant, has an all-women team of chefs, as is traditional in Thailand, and is often the restaurant of choice when Thai dignitaries visit London. Head chef Sanguan Parr has worked in the restaurant since it opened in 1994. Clad in luxurious teak, shipped from Thailand, the Nipa Thai is tiny for such a large hotel, but this also adds to its appeal – reservations are very much necessary.

Before its Thai makeover, the Royal Lancaster had been limp and lacklustre for several years, a far cry from its 1960s heyday. The hotel — commissioned by the entertainment-centred Rank Organisation — was picked for The Italian Job because of its thrusting trendiness.

The famous scene from the movie of a bevvy of scantily-clad beautiful women seducing Charlie Croker was close to contemporary reality, today’s hotel manager Alexander Henskens told me.

‘I think those sort of parties were quite common here at that time,’ Alexander noted drily, ‘the hotel attracted rock and film stars. For instance, The Beatles held a Yellow Submarine post-premiere party at the hotel.’

One famous scene (above) from The Italian Job, showing a ‘bevvy of scantily-clad beautiful women’ seducing Michael Caine’s character, was shot in what is now the hotel’s Royal Suite 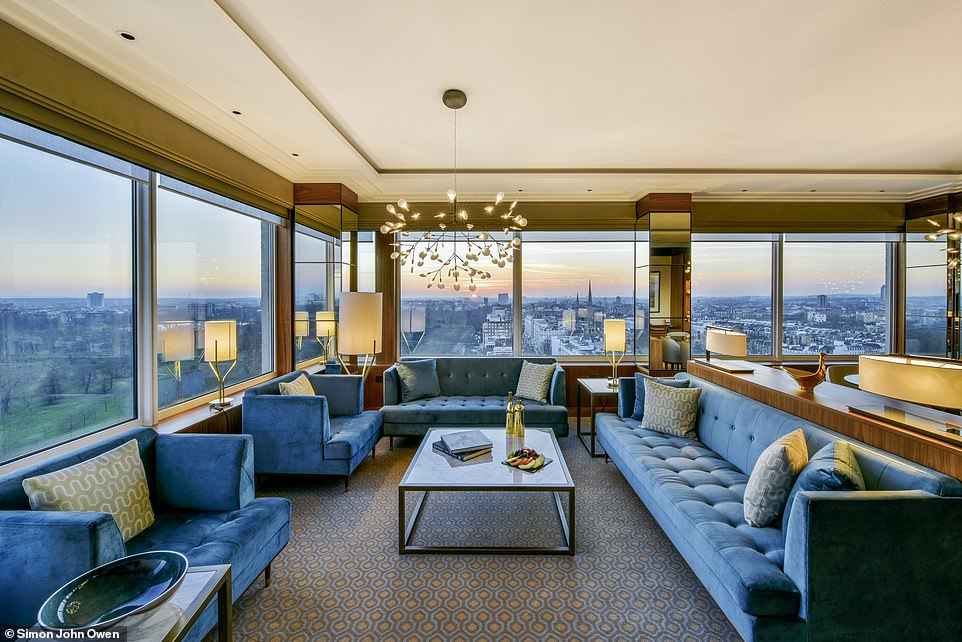 Movie-star quality: The Royal Suite attracts the princely sum of £3,100 per night

Hotel manager Alexander Henskens told Carlton that the hotel is proud of its connections to The Italian Job. Pictured is the bedroom in the Royal Suite 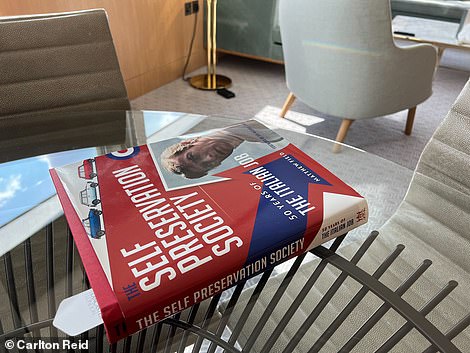 Croker’s seduction scene — featuring a grand bedroom with spectacular views over Hyde Park — was shot in what is now the Royal Suite.

Alexander said the hotel was proud of its connections to The Italian Job. Back in the Park Suite, there’s a large book about the movie (appropriately enough, it’s displayed on a coffee table) with a honeycomb-emblazoned bookmark highlighting the section that features the hotel.

Having a direct and tangible link to one of the most iconic movies of the swinging sixties might not be a draw for all guests, but the Royal Lancaster London doesn’t have to hark back to a golden age because its key selling points — exemplary service and grand views — set it apart anyway.

The five-star Royal Lancaster London dominates the skyline at Lancaster Gate, opposite Hyde Park, and a five-minute walk south of Paddington Station.

The hotel — a conference and banqueting specialist — had an £80million refit in 2017.

The Royal Lancaster is a sister hotel to Landmark Bangkok and has been under Thai ownership since 1994. Founded by hotelier Khun Jatuporn Sihanatkathakul, the Landmark Group is second-generation family-owned.

The service at the Royal Lancaster London is nowhere flagged as such but it’s quintessentially Thai. ‘You will find few hotels in London with the same genuine philosophy of wanting to please,’ said hotel manager Alexander Henskens.

Doubles cost about £500, with the Royal Suite attracting the princely sum of £3,100 per night.

The hotel prides itself on its green credentials, including membership in the plant-a-tree service Hotels for Trees. The hotel plants a tree each time a guest chooses to skip their daily room clean.

Hotel-branded Dutch-style bicycles can be rented by the hour (£4.50) or day (£16), and most hirers — like the bees from the honey farm on the hotel’s roof — probably head for Hyde Park.

CONS: No head for heights? Don’t stay in the larger, elevated suites — there are still views over Hyde Park from the lower rooms. Cost – even the non-suite rooms are pricey. The Royal Lancaster is a banqueting specialist and can get busy when events are being staged.

Richard Hammond on ‘last thoughts’ before wife woke him from coma