“IT looks like Jurassic Park, where are the dinosaurs?” jokes my boyfriend as we wind our way down a volcano surrounded by verdant, green foliage.

With its black beaches, hot springs and isolated spot in the Atlantic, the nine volcanic islands of the Azores make you feel as though you’ve stepped on to a movie set. 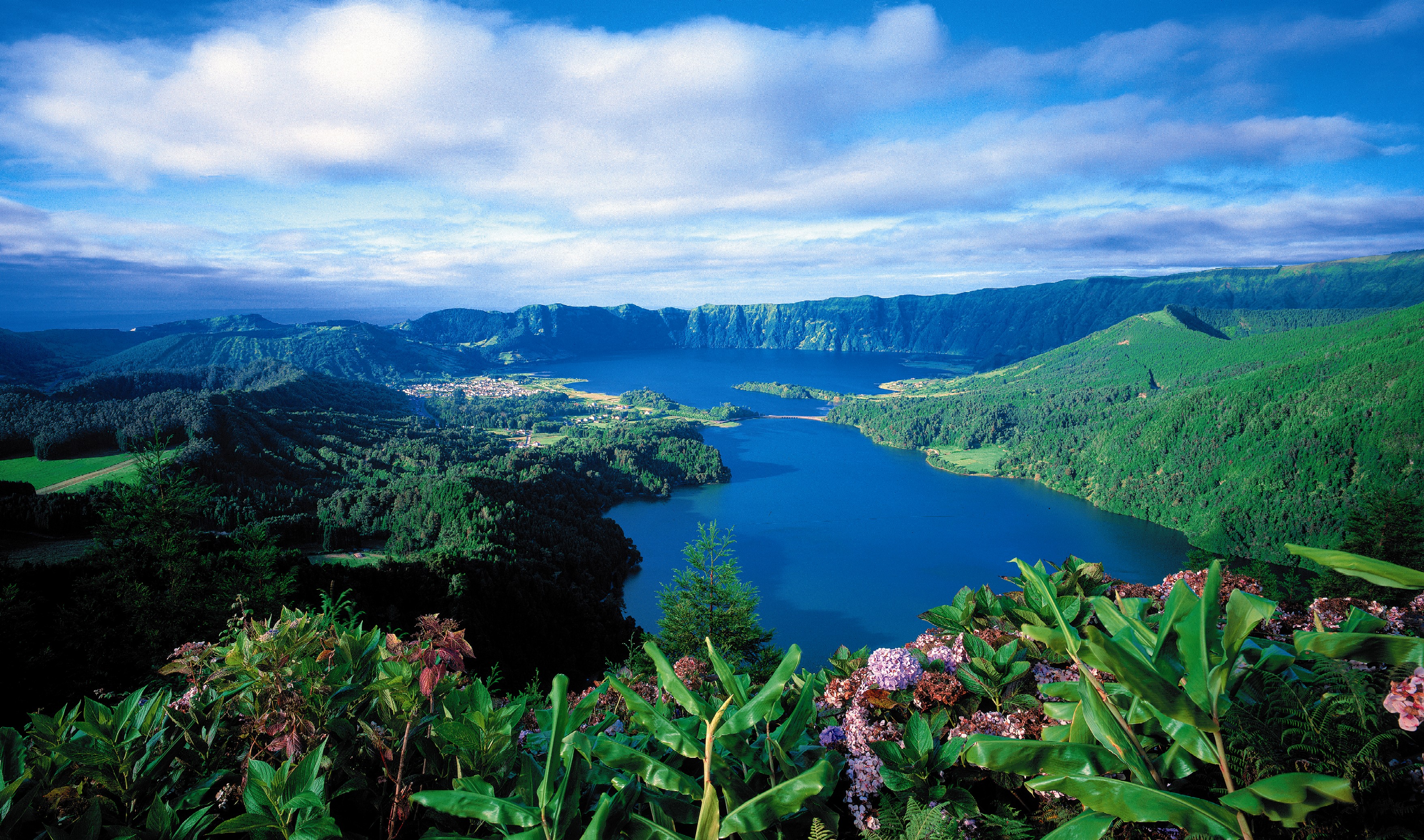 Set 950 miles from their Portuguese owners, with just the Arctic to the north and Antarctica to the south, the islands are a spectacular haven for adventurers.

We’d arrived on a speedy two-hour flight from Lisbon to the largest island in the archipelago, and gateway to the Azores, Sao Miguel, and every turn in our rental car looked picture-perfect.

Fresh off the plane, we gave ourselves the task of preparing a local dish that certainly strolled out of the realms of your usual holiday dinner; a stew cooked underground using the heat from a volcano. Not your average slow cooker.

The first step to creating a traditional Cozido das Furnas, we were told by local chef Valter Vieira, was to toss up to seven types of meat and vegetables into a large pot. 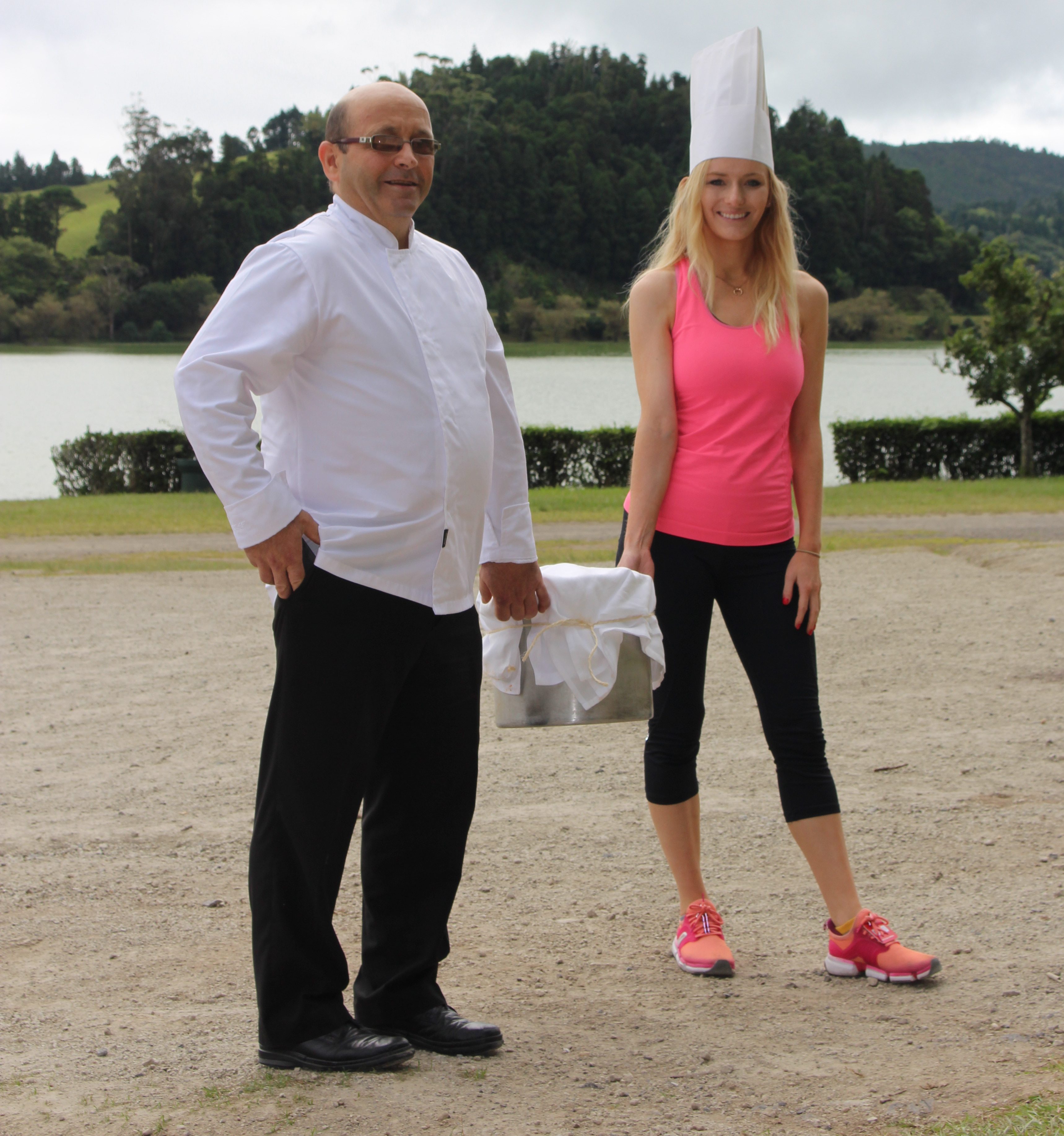 Handing us potato peelers with a wink, we were put to work in the kitchens of the hotel at the famed Terra Nostra Gardens, where Valter makes up to 90 cozidas a day.

We added the ingredients — which include pig’s ears and pork belly — to the cooking dish before sealing the lid with muslin and knotted twine.

Each morning, locals and eager newbies like ourselves, flock to take advantage of the hissing sulphurous, 4ft-deep pits in Furnas.

We were told we’d be playing the long game, as our lovingly-prepared dish would take up to seven hours to cook using the geothermal heat. 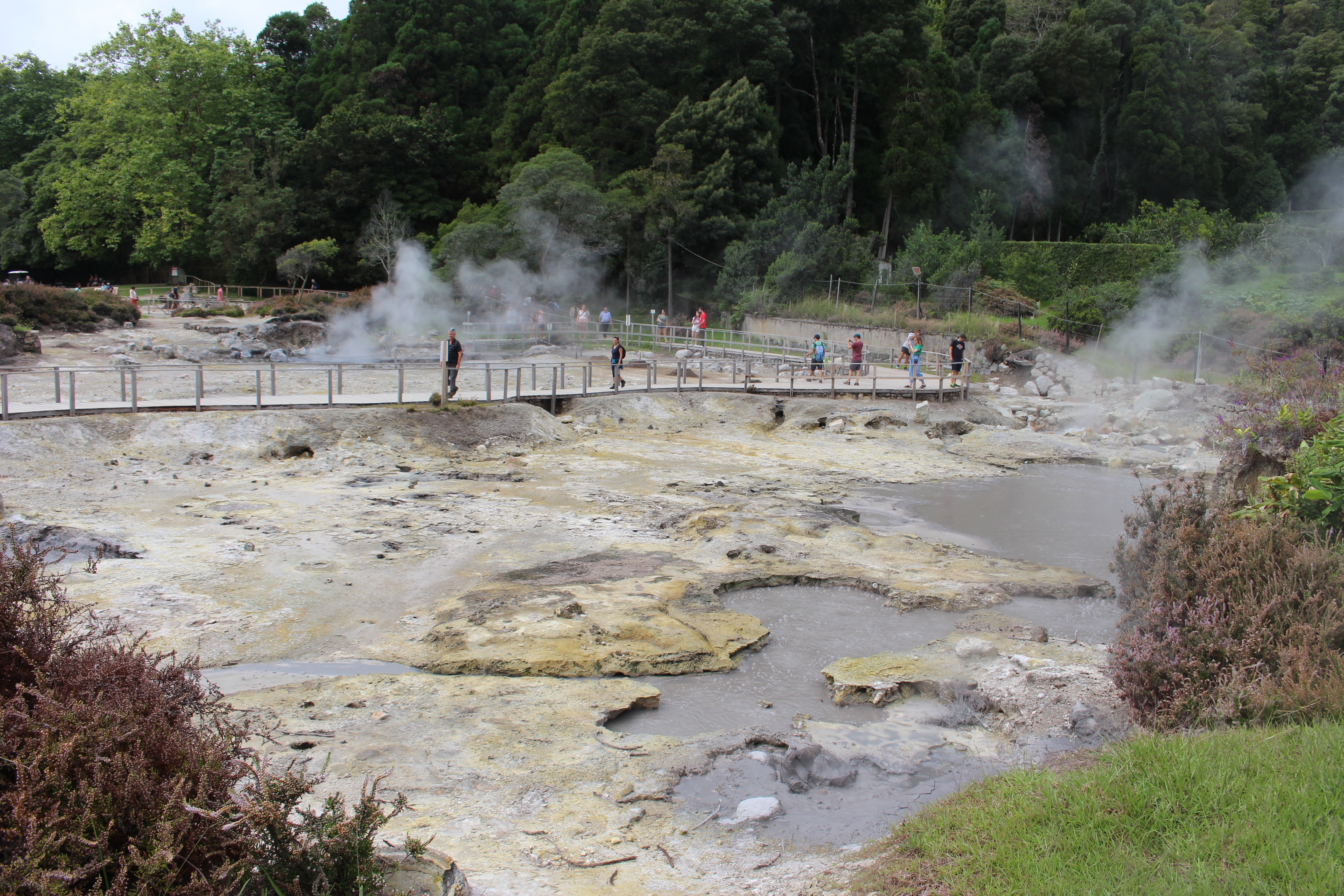 Not to worry — as we were spoilt for choice as to how to occupy ourselves in the area while we waited.

First we embarked on a kayak tour of the pea-green Furnas Lake, and snuck a peek at the 17th century mansions nestled on the quiet banks.

Then, a quick drive up to the Pico do Ferro viewpoint rendered us speechless as we gazed down at the bubbling geysers below and the spectacular crater lake we had just navigated below.

Tummies rumbling, we headed back to the Terra Nostra Gardens excited to see how our volcanic cuisine had turned out. But first, we still had time to explore the other delights on offer. 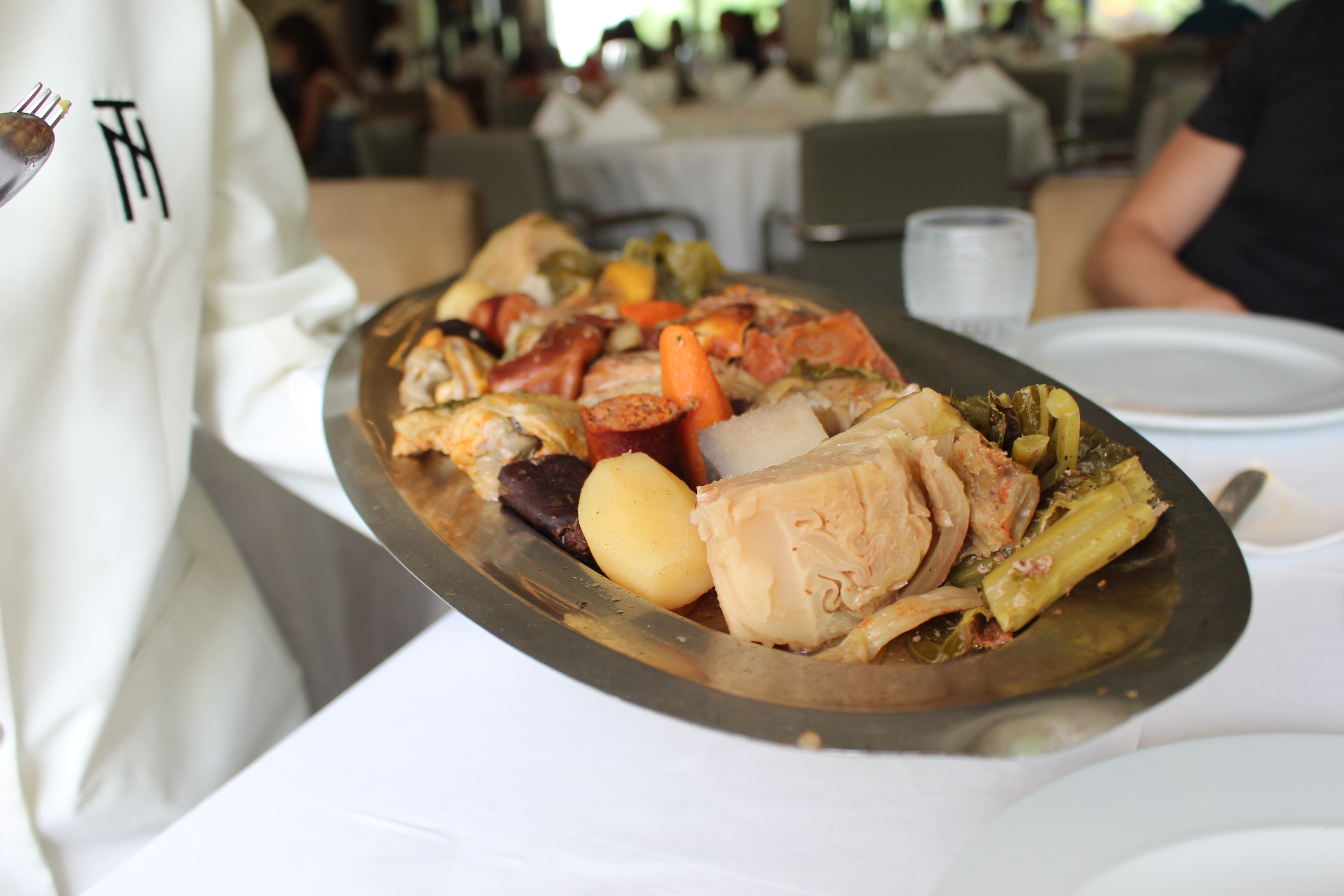 It costs just five euros to walk down tree-lined avenues in the botanical gardens, and you can see mystical grottoes and diverse fauna from all over the world.

The outing was a bargain considering you also get the chance to have a dip in a large hot spring and natural Jacuzzis.

We were told the best time to visit the orange-hued pools — distinctively coloured thanks to the high iron content — is when it is quieter in the mornings.

Hotel guests get provided with a fluffy grey robe and can access the waters an hour earlier than the public.

The largest pool — located in front of a summer house first built by a wealthy American expat in 1780 — reminded me of the chocolate river from Willy Wonka, but best to not consume these waters.

Temperatures reach 37C and it wasn’t long before our swimsuits went a rusty shade from the colourful pigment.

GETTING/STAYING THERE: An activities holiday to The Azores with Sunvil costs from £1,265pp including seven nights’ B&B at Pedras Do Mar, return flights from Stansted to São Miguel, car hire and the following activities: swimming with dolphins, canoeing and Cozido “volcano” experience (based on two people). 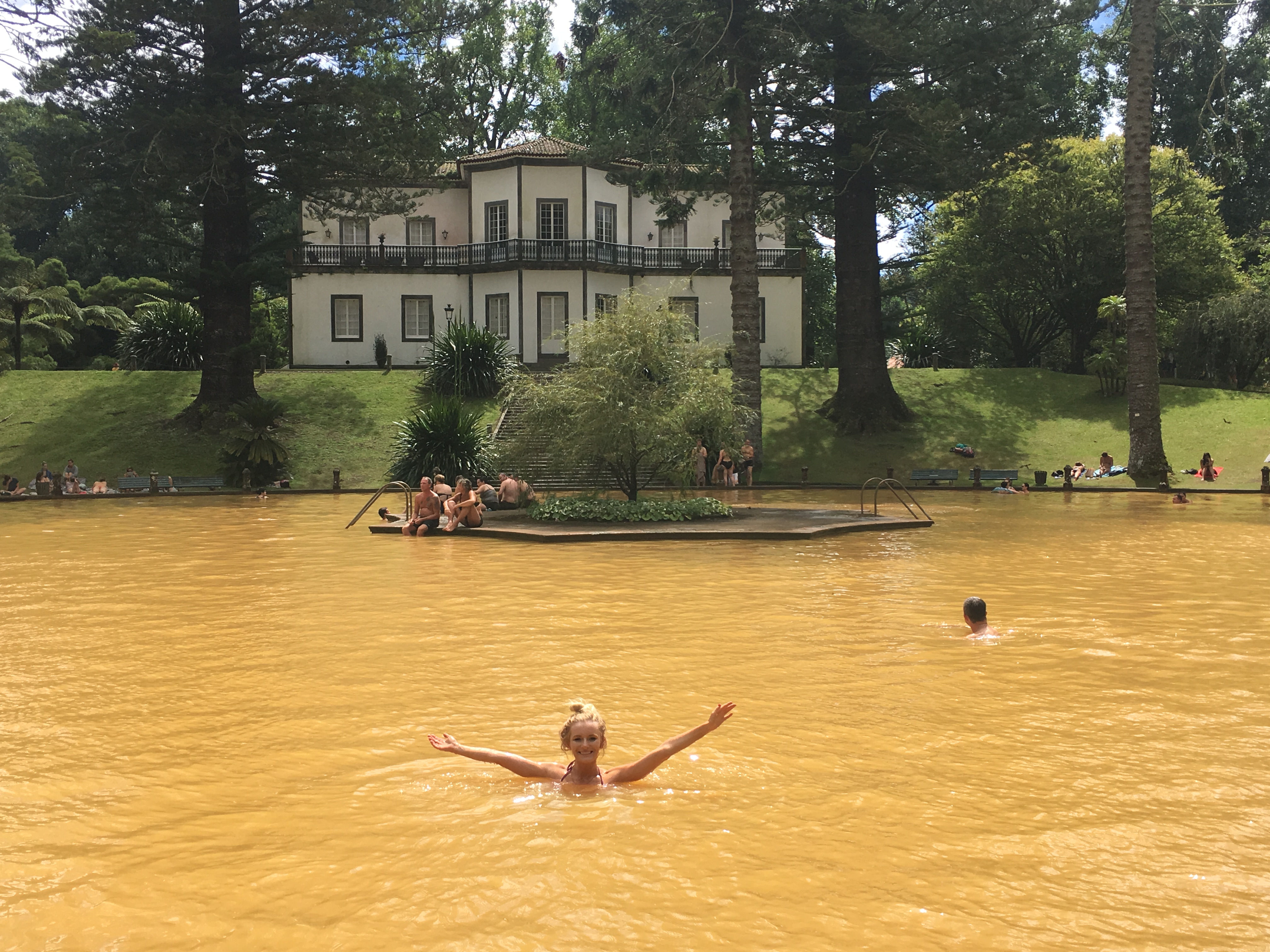 Finally it was time to enjoy our volcano-cooked cozido and it was certainly worth the wait.

The tender stew, marinated with white wine and a splash of the non-traditional peri-peri sauce was a welcome feast for us hungry explorers.

At the end of jam-packed days of swimming with dolphins at sea and snorkelling around the picturesque island of Ilhéu de Vila Franca, we were happy to return to our hotel each night.

Our home during the trip was the 5-star Pedras Do Mar Resort; a tranquil, cliff-side oasis on the north side of the island.

We were delighted to discover it came with an infinity pool overlooking the ocean and natural pools down teetering stone steps.

After some persuasion I even took a dip in the chilly ocean, but was glad to retreat into the hotel’s warm spa to defrost.

Many people are lured to the Azores for whale watching and the abundant marine life around the islands. With everything you could need to feast your eyes and your belly, it’s clear to see why it is often dubbed the Hawaii of Europe.

Thankfully, it doesn’t come with a long-haul flight and pricey plane ticket.