Home » Travel » I returned to London, where I lived before the pandemic, and it made me realize I’m in no hurry to move back 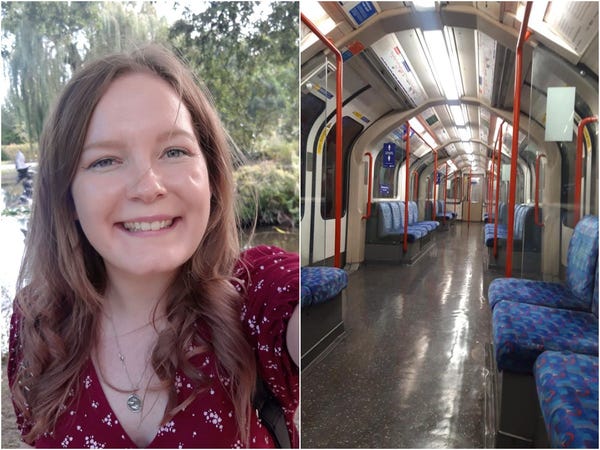 I moved from my hometown of Glasgow, Scotland, to London in March 2019, without knowing a soul there.

Strangely enough, I didn't felt nervous about moving alone. I was there to start my job as a royals reporter at Insider, where I do what I love every day.

My personal life, however, was another story. Five months into living in my first apartment, there was a series of attempted break-ins. I didn't feel safe living there anymore, but I soon found a new apartment share near Shoreditch, a neighborhood in east London.

The apartment was tiny — there was no living room — but my new roommates Cécile and Amy more than made up for it. Both were in their early 20s, like me, and neither of them were from London.

We spent our weekends together, exploring the nearby Brick Lane or enjoying evenings out in Shoreditch. On weeknights, we would gather in my room — the designated living room — to watch bad reality TV shows and talk about our days at work. It didn't take long for us to become a tight-knit group.

But then the UK went into lockdown, and we haven't seen each other since.

On a recent weekend trip to London in September, I'd hoped we could meet again — but the pandemic had other plans.

I lived with Cécile and Amy for around seven months before Insider's office closed in March, which also happened to mark one year since I joined the company.

After some convincing from my parents, I left for Glasgow on March 15, joining the nearly 250,000 other Londoners who departed before the UK went into lockdown later that month.

Amy and I moved out of the apartment permanently, not wanting to pay rent while we were lucky enough to work for companies that allowed us to do our jobs remotely.

Since there was so much uncertainty surrounding the pandemic, neither of us felt comfortable staying away from our families. Not to mention, an apartment without a living room or outdoor space wasn't an ideal place to spend lockdown.

Since Cécile's family lives in France, it wouldn't have been easy for her to leave, so she stayed at the apartment and eventually found two new roommates.

As the months whizzed by, I kept wondering when — or if — I would be called back to the office. When the infection rate increased in the UK, it became clear that this wouldn't happen any time soon.

But at the end of September,  I flew from Glasgow to London for a long weekend as restrictions eased, eager to see my former roommates, friends, and coworkers again.

I booked a hotel in Whitechapel, east London, just a few minutes' walk from my former apartment, where Cécile had remained. I would stay for four days, from Friday until Tuesday.

I was looking forward to staying in a hotel for the first time in months. The only thing that felt different to me was the requirement to wear a mask when you weren't in your room, something that we're all pretty used to doing in public by now anyway.

Amy wasn't able to join us due to family commitments, so it wouldn't be exactly how it was before. But this was the closest I was going to get to experiencing a snippet of my previous life.

The restrictions in London were less severe than in Glasgow at the time. In the capital, you were allowed to meet in groups of six in public or at home. In Glasgow, you could meet six people from two households in a public setting, but home visits were prohibited.

I had plans to meet up with some of my coworkers, but the majority of the weekend would be spent with Cécile. As soon as I stepped off the plane on the Friday afternoon, I texted Cécile to let her know I had arrived.

She called me back, saying she might have the coronavirus.

I spent most of the weekend alone, and it reminded me how isolating London can be

Cécile's new roommate had tested positive for COVID-19, the disease caused by the coronavirus, so she was required to self-isolate. She had arranged to take a test over the weekend, but by the time she would receive the result  — which ultimately came back negative — I would already be on a flight back home.

Although I was nervous for Cécile, I was still optimistic about the weekend. I was going to visit places that I never got around to seeing when I lived here.

After meeting friends for brunch on Sunday, I headed off on my own to try the Emirates Air Line cable car.

The cable car, which takes you from Greenwich to Royal Victoria across the River Thames, provides a few of the city's most iconic landmarks. It felt like the ultimate tourist experience, something which I could indulge in since I technically was one now.

There was no waiting in line, and the surrounding area was pretty quiet since there were less tourists in the city. I have to admit, I enjoyed the absence of the hustle and bustle.

The rest of the weekend followed a similar pattern. The mornings would be spent reuniting with friends and coworkers, and the afternoons were spent alone.

I spent one afternoon reading at Primrose Hill, taking in the skyline before walking through Regent's Park.

While the area was slightly busier than the cable car, I still felt fairly safe. The people around me seemed to respect social distancing.

I treated myself to dinner at Dishoom, a popular restaurant I had always wanted to try.

In some ways, the social distancing restrictions made dining out easier than before — I had previously tried and failed to take my parents to Dishoom when they visited me in London at the beginning of the year as they didn't take bookings back then.

The service was excellent, and I felt safe since all staff and customers were required to wear masks when they weren't seated at a table. That being said, I didn't enjoy the experience as much as I had expected to.

Dining alone is something I usually enjoy, but this time it felt different — there was a sadness that surrounded the experience that likely wouldn't have been there before the pandemic.

At the end of the night, the server ended up giving me a free dessert. He insisted it was because the chef had made an extra portion by mistake, but I think he secretly sensed I needed cheering up.

Don't get me wrong, spending time alone is something we all need every now and again. But being alone in London came as a shock to the system after spending the past six months living with my family.

It reminded me of how much alone time I'd be spending if I were to move back to the city during the pandemic.

There was a part of me that thought a weekend in London would provide the nudge I needed to return. But that didn't happen.

I struggled with the feeling that not all London residents were practicing social distancing. One minute, I was the only passenger on the underground. The next, it was filled with people — and many didn't comply with the tube's distancing guidelines.

Customers are required to wear masks on all public transport in London, and there was signage that suggests leaving the seat next to you empty for social distancing.

At one point, a man who wasn't wearing a mask decided to sit next to me, even though there were plenty of other empty seats in the carriage.

Of course, being back in the city reminded me of all the things I had been missing for the past couple of weeks after restrictions eased. I was also stunned by how "normal" the city seemed in comparison to my hometown.

Walking along Tower Bridge at sunset to see large groups of people posing for photos provided both a breath of fresh air — and a false sense of security.

My weekend would have been completely different if Cécile had been with me. But being alone gave me the opportunity to make these observations, and to debate the pros and cons of moving back.

Since I was staying so close to my former apartment, it was easy to transport myself back to when I did live here. The weekend felt less like a getaway, and more like a glimpse into what my life would be like if I hadn't left.

I had to consider what would happen if I did move into an apartment, and the city went into another lockdown — something which did happen almost three weeks after I returned from my visit. Following the government's latest restrictions, it will likely be a long time before things are considered back to normal in the UK.

Londoners are now banned from mixing with other households in homes and other indoor settings, including restaurants, as part of new restrictions that were put in place on October 17.

If I had moved back to the capital, I'd likely be facing these restrictions with significantly less space — and less company — than I have right now at my family's home.

I love London, but not enough to take the risk.