The Armchair Traveller: Be dazzled by Italy and delve into Paris’s secret maze of tunnels – how to explore the world from the comfort of your home

The first guidebook from Rough Guides was published about 40 years ago (it covered Greece) but the company has long since had a brilliant website too. Click on it to read, in reverse order, the result of its 2020 readers’ poll into The 20 Most Beautiful Countries In The World.

Fabulous photographs accompany each entry, with Nepal at No 20, followed by Spain, Chile and Argentina. With its fascinating mix of the ancient and modern, Japan makes it into the top ten, and your travel bucket list will get longer as you scroll to the No 1 spot occupied, naturally, by Italy.

As a major tourist destination, France also makes it into the Rough Guides poll but if you think you know its capital, think again. The Secret Catacombs Of Paris podcast on the BBC Sounds app springs surprises from the start, revealing that the City of Light has a dark side: it’s built on more than 175 miles of tunnels, most of which are supposed to be off-limits. 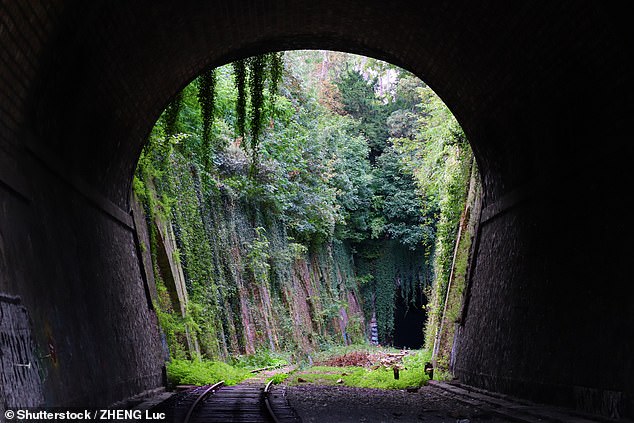 The Secret Catacombs Of Paris podcast explores the French city’s tunnels. Pictured is a section of the mostly abandoned belt railway known as La Petite Ceinture

Host Jonathan Glancey speaks to a secretive band of Parisians who search for hidden entrances in train stations, cellars and sewers, and to police officers who patrol the tunnels beneath sensitive sites such as banks and prisons. Along the way Glancey reveals how the network was created and why it’s full of old bones.

Paris, of course, is home to some of the world’s greatest landmarks, such as the Eiffel Tower. And if travel lovers want to remind themselves of various gems around the globe, they could order the 1,000-piece World Landmarks puzzle from Ravensburger.

Online retailers expect to sell a year’s-worth of jigsaws in a month as simple pleasures come back to the fore. This one includes nearly 100 cleverly hidden sights, including Gaudi’s Sagrada Familia in Barcelona, the Leaning Tower of Pisa, the Pyramids of Egypt, Rio’s epic Christ the Redeemer and Copenhagen’s Little Mermaid.

Meanwhile, maps of the world jump off the page amid scarcely believable stories of political incompetence in Prisoners Of Geography: Our World Explained In 12 Simple Maps, by Tim Marshall.

He races across the globe, bringing whole regions to life and showing why so many national borders have proved to be disastrous mistakes. It’s lightly told, with chapters headings such as How Do You Solve A Problem Like Korea?

And if you are home-schooling or compiling a family quiz, the book is a great way to catch up on geography and 20th Century history. 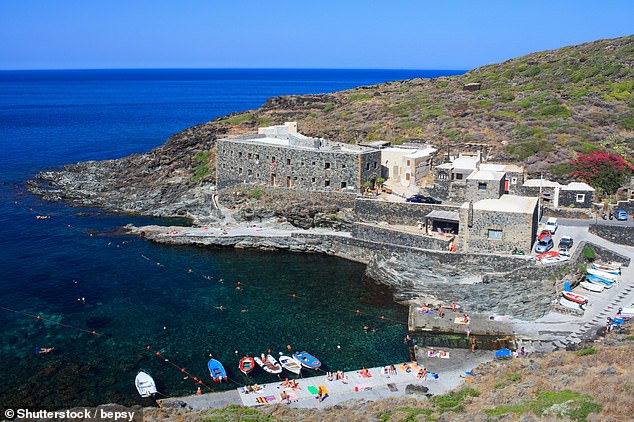 Film fans can fall in love with the Italian island of Pantelleria, pictured, in A Bigger Splash

If audiobooks are more your thing actress Julie Harris brings a very well-travelled Englishwoman to life as she reads West With The Night. It’s the memoir of Beryl Markham, who in 1936 became the first person to fly solo, non-stop, across the Atlantic from east to west. A genuine modesty pervades Beryl’s story as she roams the globe in the early days of air travel.

Film fans can fall in love with the sun-kissed but little-known Italian island of Pantelleria in A Bigger Splash, starring Tilda Swinton and Ralph Fiennes.

In real life, the tiny volcanic island is where celebrities including Madonna, Sting and Giorgio Armani go on holiday.

This drama is an adult affair, with the stars behaving badly around the villa’s pool, but the scenes of slow-dancing in warm piazzas, alfresco meals by the water and a stunning, candle-lit restaurant in the hills are the stuff of holiday dreams.