Home » Travel » How Crowded Are America’s National Parks? See for Yourself. 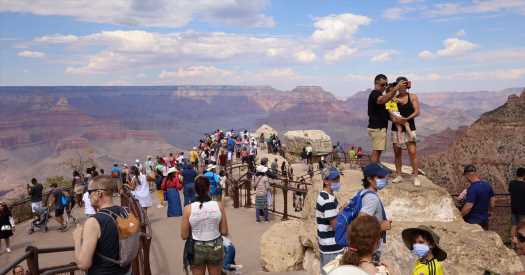 How Crowded Are America’s National Parks? See for Yourself.

Americans are flocking to national parks in record numbers, in many cases leading to long lines and overcrowded facilities. Here’s what four parks looked like over the holiday weekend.

Mather Point, at Grand Canyon National Park, over the Fourth of July weekend.Credit…

By The New York Times

Largely freed from domestic travel restrictions, Americans have been flocking to national parks in record numbers this spring and summer. Several parks — including Yellowstone National Park and Grand Teton National Park — have already set monthly visitation records. Many sites are gearing up for their busiest years in history.

And so, in place of serenity, many visitors have instead found packed parking lots, congested trailheads, overrun campsites and interminable lines.

Hikers at Zion National Park, in Utah, have faced wait times of four hours to access certain trails. Visitors to Arches National Park, in the same state, are being turned away at the gate — “The park is currently full,” the Parks Service’s Twitter feed routinely announces — and asked to return at a later time.

Here’s what they saw. 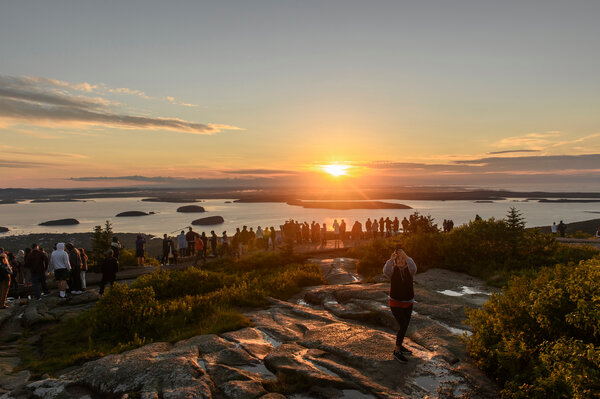 With its panoramic vistas, Acadia’s Cadillac Mountain, above, is popular among visitors as a prime spot to watch the sunrise. On this July morning, the 4:53 a.m. timing did not deter the crowds.

To reduce overcrowding and protect the natural resources on the summit, the park instituted a reservation system between May 26 and Oct. 19 for all vehicles heading up to the mountain. The limitations have helped keep congestion somewhat in check, and have reduced illegal parking beyond the site’s 150 parking spots.

Jordan Pond, which overlooks the twin mountain peaks known as the Bubbles (North Bubble and South Bubble), serves as a launching point for hikers and bikers. Many visitors, however, just come for a brief glance — and, of course, for the renowned popovers served at Jordan Pond House.

Visitation numbers at Acadia have increased around 60 percent in the past decade. To limit traffic, the park actively encourages visitors to use alternative methods of transportation, including bicycles and the free Island Explorer bus.

The stretch of the 27-mile Park Loop Road between Sand Beach and Otter Cliff — seen in the background, above — is one of the most heavily trafficked areas in Acadia National Park. Visitors park in small lots or along the roadway and walk to attractions like Thunder Hole, shown below.

There, under the right tidal conditions, waves crashing through a crevice and into a small cave can produce a thunderous sound and a dramatic spray of water — much to the delight, on July 5, of those on the heavily trafficked walkway.

Cars lined up in the early-morning hours at the South Rim entrance of the Grand Canyon, above, one of the park’s three gated entrances.

By late morning, the wait to enter the park was about 30 minutes — and growing.

Grand Canyon National Park, which encompasses some of America’s most iconic scenery, is perennially among the list of the country’s most-visited national parks. In 2020 it drew 2.9 million visitors, down from 5.97 million in 2019.

Mather Point, seen above, offers many visitors their first view of the canyon — despite the crowded platform.

Shuttle buses offer visitors an efficient way of getting around the park. Masks are required for all shuttle passengers, both before boarding and once inside, and the rule was strictly enforced.

Masks are also required for unvaccinated visitors inside shared spaces, as well as outside in places where six feet of distance cannot be maintained from those outside one’s household.

Keys View, above, is a popular destination at sunset. On July 3, visitors spilled beyond the walkway to take in the breathtaking views of the San Andreas Fault, Mount San Jacinto, Mount San Gorgonio and the Salton Sea.

Hikers on the Hidden Valley trail, above, made their way along a one-mile loop that winds among massive boulders, through what is rumored to have been a cattle rustler’s hide-out.

After setting new attendance records each year between 2014 and 2019, visitation numbers at Joshua Tree dropped significantly last year, in part because of temporary closures in March, April and May. Still, the park drew 2.4 million visitors in 2020 and was No. 10 on the list of the country’s most-visited national parks. 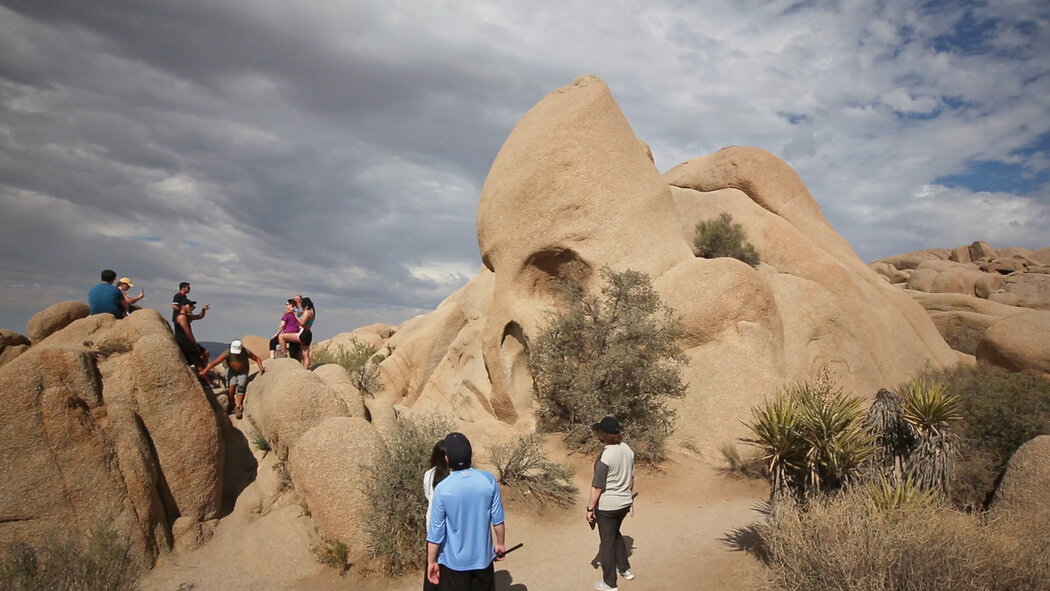 Skull Rock is a granite rock formation with two depressions that resemble hollowed-out eye sockets. Its easy access — the site is just off the park’s main road — helps make it a heavily trafficked landmark.

The crowds here were not overwhelming, though visitors had to wait to take photographs, as seen above. 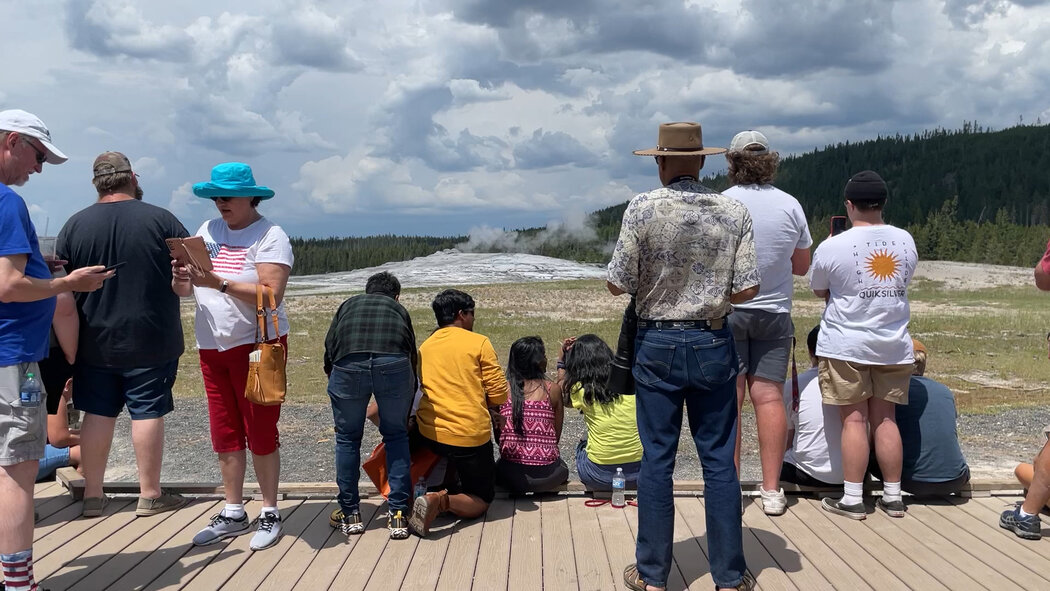 Above, visitors await the eruption of Old Faithful, one of the park’s biggest draws, on July 4.

Yellowstone set visitation records this May, hosting 483,159 visitors, an 11 percent increase compared to May of 2019. (The park was closed for much of May last year.)

At Midway Geyser Basin, above, the last of the evening’s visitors walk on a crowded boardwalk next to the Grand Prismatic Spring.

June, July and August are typically the busiest months at Yellowstone.

The area around the geyser was most congested immediately after the eruption, as people departed the viewing platform. Then, the crowds were reminiscent of those at Disneyland.

Above, a crowded boardwalk that leads to Grand Prismatic Spring.

Within the park, the lines at places like the cafeteria and the visitor center were not very long, since the park staff was effectively shepherding the crowds.