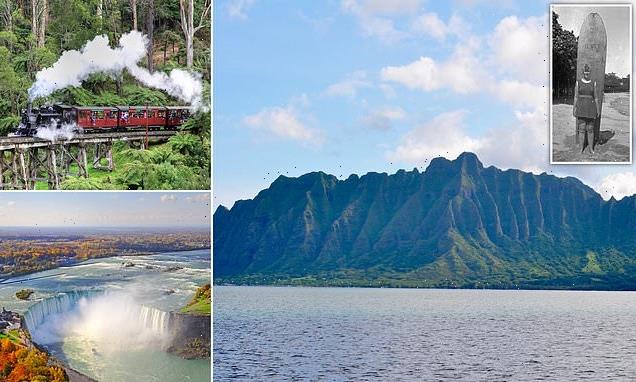 Agatha’s global thriller: In 1922, the Queen of the Whodunnit set off on a world tour taking in Africa, Australia, Canada and Hawaii. Here’s how you can follow in her footsteps

In Brown’s Hotel in Mayfair, there’s a frisson in the air. People bustle in and out of the lobby, genteel ladies await friends and an assortment of various relatives of different generations greet one another effusively.

In the ground-floor Drawing Room you can watch all these goings on from Table 9, tucked just inside the doorway. It is a scene barely unchanged since the 1920s, when eagle-eyed author Agatha Christie would often sit here to write and find inspiration for her chorus of characters.

And she not only based one of her novels, At Bertram’s Hotel, on the timeless bolthole, but, attracted by its ‘plush cosiness’ as she described it, she also stayed here before she embarked on a ten-month tour around the globe in 1922.

Travel company Black Tomato has reimagined Agatha Christie’s ten-month tour around the globe. The monumental journey allows visitors to takes in sights including South Africa’s Table Mountain (pictured), which the writer described as having a ‘queer flat shape’ 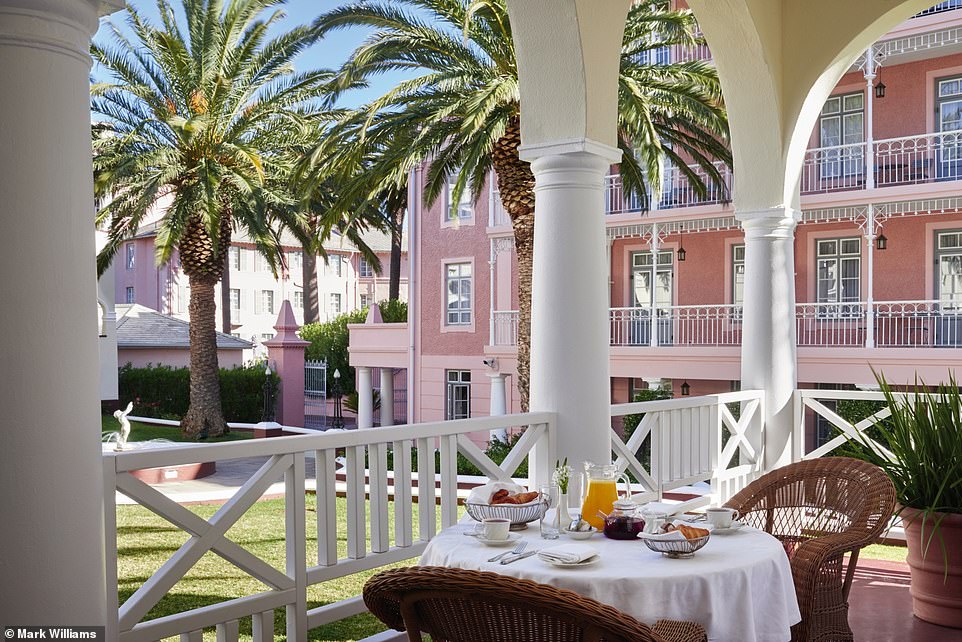 During the 40-night trip, guests will check into the same historic hotels as Christie, such as the Belmond Mount Nelson Hotel in Cape Town (above)

It’s been 100 years since she took off on her ‘Grand Tour’, and now Christie fans can do the same with an epic journey of three parts. Conceived by travel company Black Tomato, in collaboration with Christie’s great-grandson James Prichard, co-founder Tom Marchant says the idea is to replicate her passion for storytelling through travel.

‘I grew up with Agatha Christie, through reading and watching her television dramas every Sunday with my family, a cosy ritual of my childhood that opened up the world of travel to me,’ says Marchant. ‘Though a century apart, we both see the world as a remarkable source to fuel creativity. Her adventure inspired some of her most beloved books.’

Based on archive material, including Christie’s diary and the letters she sent during her time away, the company has mapped out three journeys following the route she took. 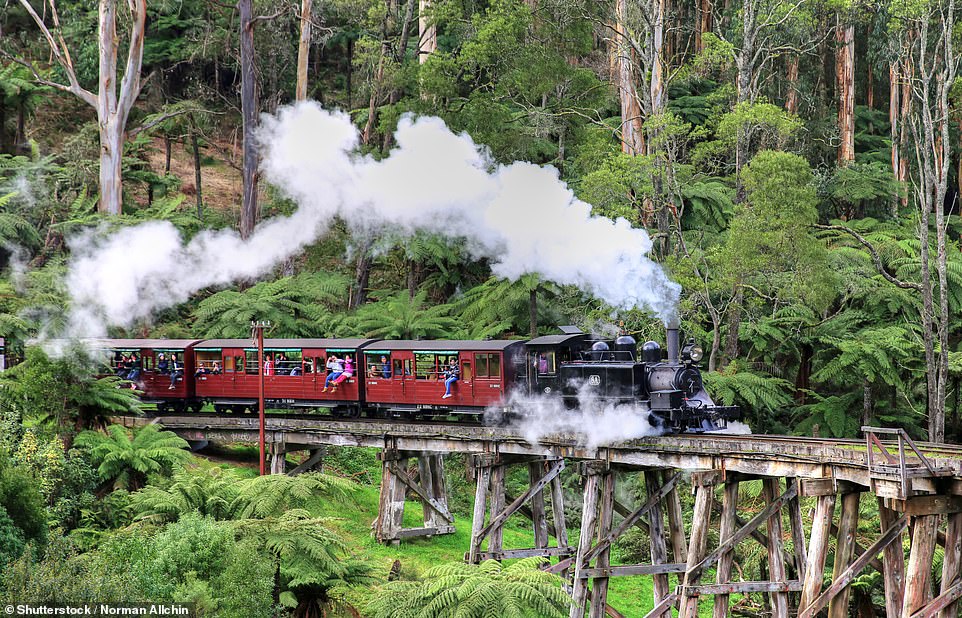 You can do part of the journey or the full 40-night expedition, which is broken up into three ‘chapters’: South Africa, North America, and Australia and New Zealand.

Christie’s journey was originally intended as a fact-finding mission for her husband Archie, who was a financial adviser for the upcoming British Empire Exhibition of 1924. Christie, then aged 32, was intent on joining him, despite it meaning they would have to leave behind their two-year-old daughter Rosalind. She describes in her book The Grand Tour that this would be her one opportunity to expand her horizons: ‘I longed to see China and Japan and India and Hawaii, and a great many other places, but my dream remained, and probably always would remain, wishful thinking. We had never been people who had played safe, and now we were determined to see the world and risk what would happen on our return.’

Prichard describes his great-grandmother as fearless for her time, adding: ‘Early journeys to Cairo and Paris whetted her appetite. I suspect that she saw the trip she made with Archie as the ultimate travel opportunity, and not just something she needed to do to support her husband.’ 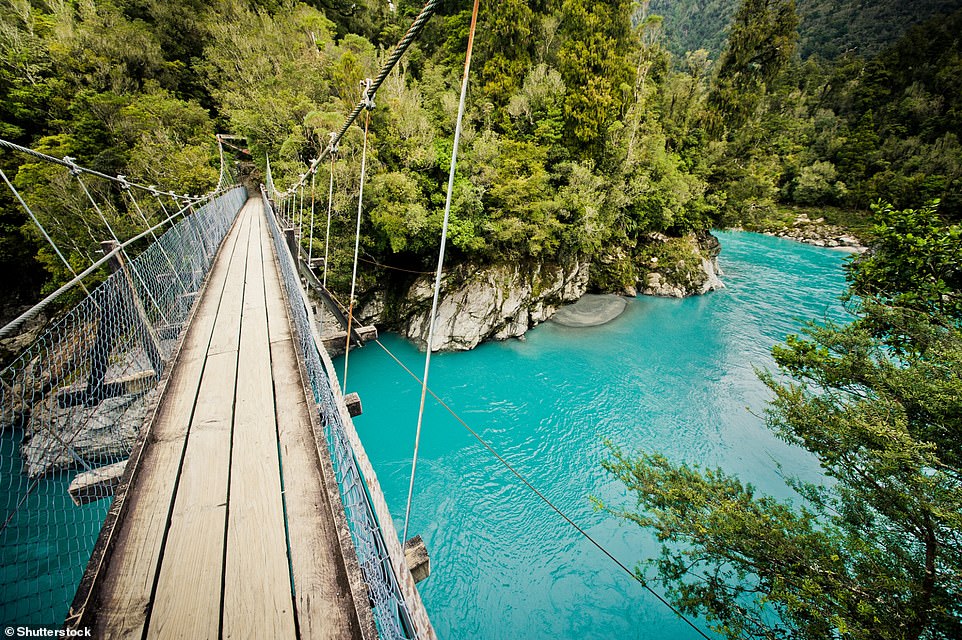 Most beautiful: In New Zealand, you can visit the same wilderness landscapes of Rotorua, Nelson and Hokitika (above) that Christie fell in love with

Those who want the full experience might start with a stay at Brown’s Hotel. From here you can explore the writer’s London with a private walking tour, and see one of Christie’s plays come to life with tickets for Witness For The Prosecution at County Hall (witnesscountyhall.com).

For even more insight into her life and times, you can also arrange to have Brown’s renowned afternoon tea accompanied by either British historian Lucy Worsley or Prichard, who promises to bring insider knowledge about the writer.

The idea for this new Grand Tour, says Marchant, was for travellers to experience the same significant moments that Christie did but reinterpreted for the modern age.

Chapter One takes visitors to South Africa, where you can bed down at the Belmond Mount Nelson Hotel – just as Christie did – and also learn to surf, as she did, with Table Mountain as the stunning backdrop. ‘My memories of Cape Town are more vivid than of other places,’ Christie writes in her autobiography. ‘Table Mountain with its queer flat shape, the sunshine, the delicious peaches, the bathing – it was all wonderful.’ 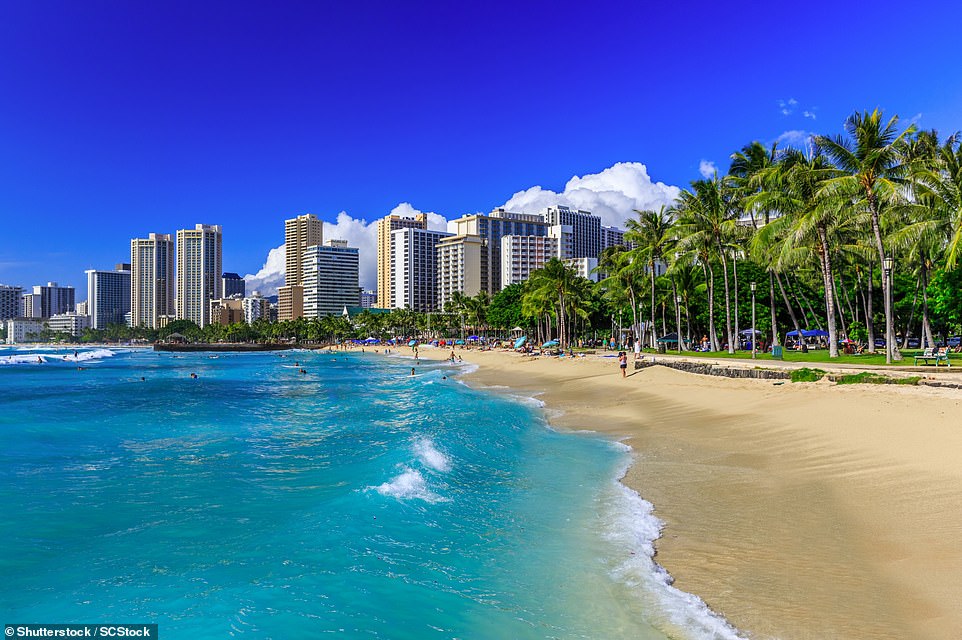 During her time in Hawaii, Christie is credited with becoming the first Western woman to learn how to stand up on a surfboard. Pictured is Waikiki Beach in Honolulu, which is included on Black Tomato’s itinerary 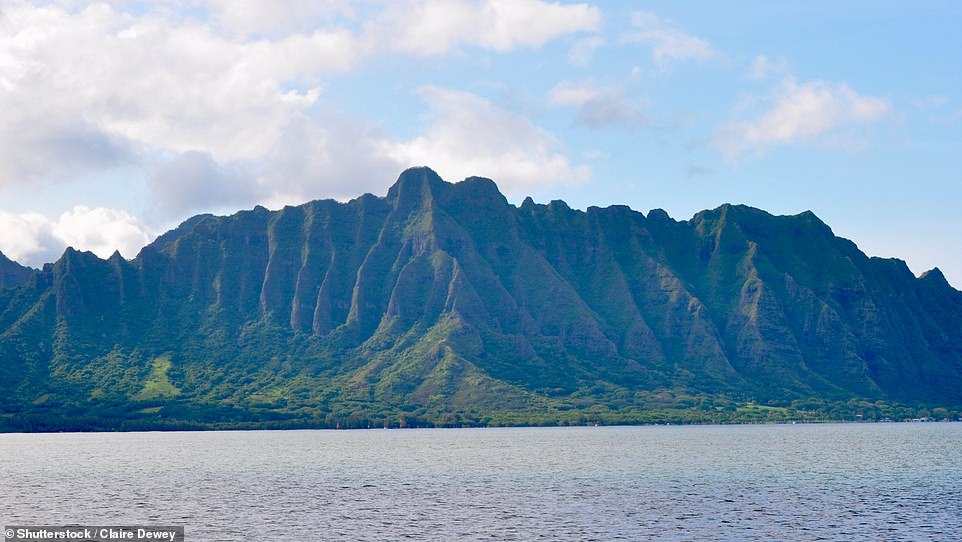 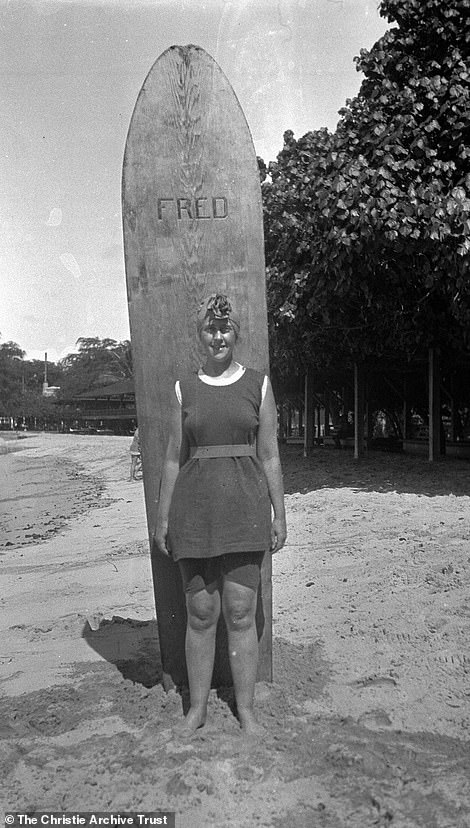 From tours of the wineries in Franschhoek to a trip on the legendary Blue Train, with a stop at the old diamond mines of Kimberley, the South African first leg aims to recapture a golden age of travel.

When Christie sailed onwards to arrive in Australia, she was immediately struck by the landscape of ‘gigantic tree ferns’ and ‘tropical jungle foliage’. She added: ‘The other thing that was exciting was the macaws: blue and red and green, flying through the air in great clustering swarms… like flying jewels.’

This second chapter is an immersive 15-night adventure through the vast country. You can follow Christie’s travels by bush tram to the remote Dandenong Ranges, east of Melbourne, where she wrote about eating ‘twenty-three oranges – carefully selected from the trees around me’.

Moving on to New Zealand, which she described as ‘the most beautiful country I have ever seen’, you can visit the same wilderness landscapes of Rotorua, Nelson and Hokitika that she fell in love with.

From the mountains and volcanoes of New Zealand, Christie sailed across the Pacific to Hawaii and America’s western seaboard. In Honolulu, she resumed her new-found passion for surfing, ‘rushing through the water at what seems a speed of two hundred miles an hour’.

Amazingly, during her time in Hawaii, the writer is credited with becoming the first Western woman to learn how to stand up on a surfboard.

She also admired the ‘hedges of hibiscus… oleanders, blue plumbago and great laburnum trees’ and ate ‘balls of corn and small pieces of banana also fried’.

With a stay at the Moana Surfrider, a century on the same waves of Waikiki are within reach. A trip along Oahu’s sublime South Shore – set against the backdrop of the Ko’olau Mountains – still looks much the same as when Christie visited in 1922.

Finally she visited Canada, with stops in Toronto, Ottawa and Banff. As well as the modern equivalent trip to Niagara Falls – this time on a private flight – you can soak up the highlights that touched Christie, which include the glacial Lake Minnewanka and the hot springs at Banff.

As a guest checking into the same historic hotels as Christie, it’s easy to experience the sense of giddy wonder she felt gazing on the clear lakes and towering trees of Banff and Alberta. 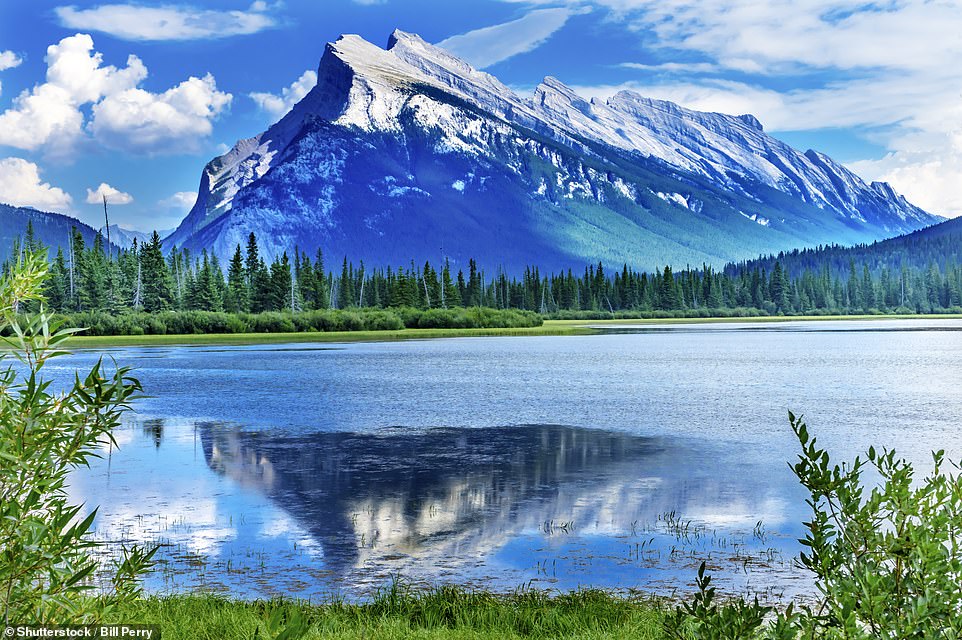 The tour stops in Canada, where you’ll visit glacial Lake Minnewanka (pictured), another place that ‘touched’ the writer

At the time, it was the perfect fodder for a writer’s brain.

‘It is no surprise that her travels appear in so many titles, from Murder On The Orient Express to Death On The Nile; A Caribbean Mystery to Death Comes As The End,’ says Prichard.

‘To my great-grandmother, all life was potential content, and as travel was such a large part of her life it is not surprising that it appears so often. 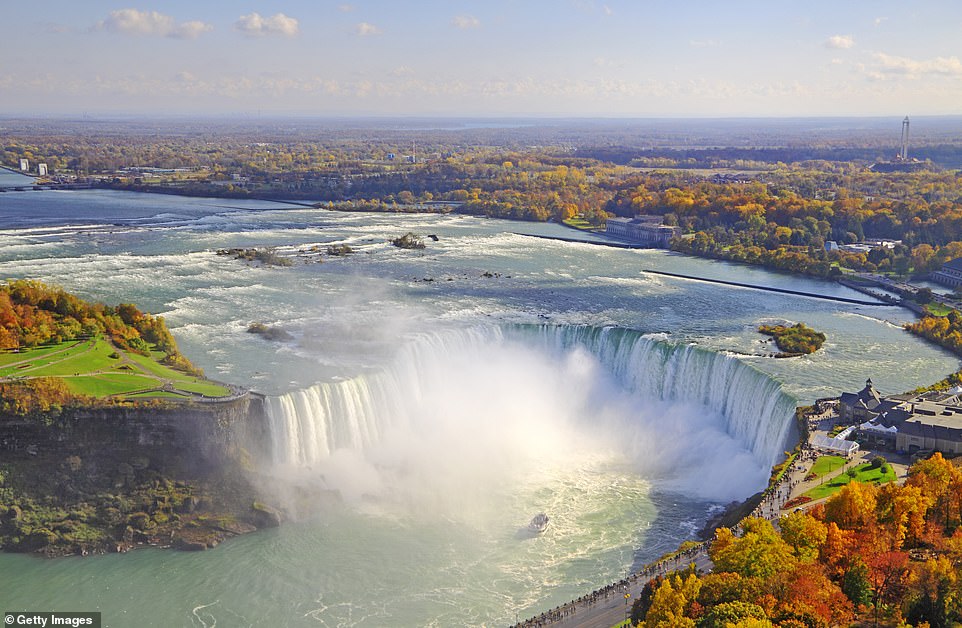 ‘When her marriage later collapsed, one of the first things she did was to travel.

‘The fact that her reaction to her husband leaving her was to travel to Baghdad and beyond shows how intrepid she was.

‘To do this solo as a woman in the 1920s must have taken a rare courage and sense of adventure.’

The Grand Tour costs from £5,350 per person for the ten-night South African leg. Price on request for afternoon tea with Lucy Worsley or James Prichard, depending on availability (blacktomato.com). For more information on Christie’s autobiography and The Grand Tour, go to christiearchivetrust.org.

22 years since the Hatfield rail crash

Is your diet to blame for agonising period pains – and which foods can ease them? | The Sun
Entertainment