If you’re planning to fly to New York from London, or vice versa, but you can’t afford to sit at the swanky end of the aircraft, pay close attention.

Here we present a sneak peek at the findings of five travel experts who reviewed economy class flights with five different carriers from the Big Apple to London. It turns out that there are huge variations in standards.

The fliers, who all work for The Points Guy UK, boarded flights operated by British Airways, Virgin Atlantic, United Airlines, American Airlines and Norwegian – and filmed their experiences. 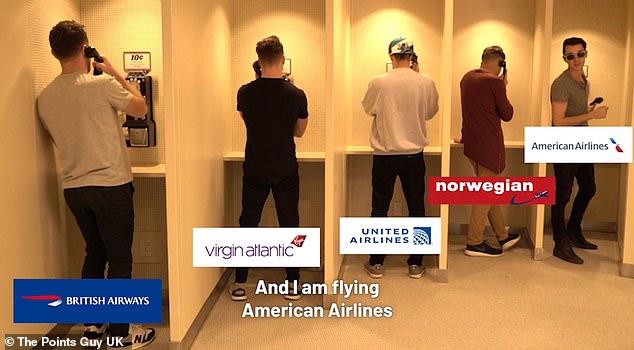 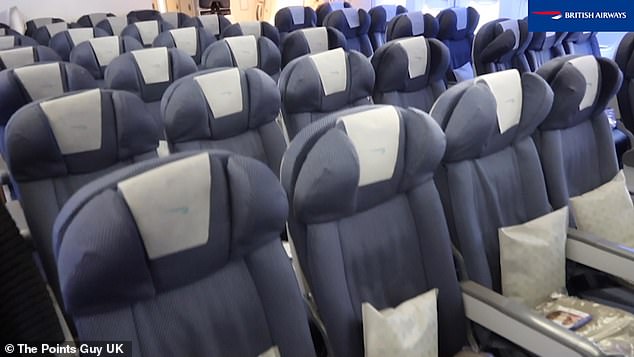 Nicky Kelvin, Director of Content, flew on a 747 from JFK to London Heathrow with British Airways 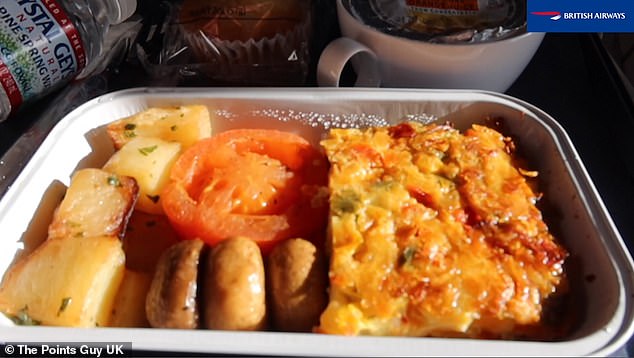 The meal served to Nicky on his BA 747 flight. He rated the price and crew

Nicky Kelvin, Director of Content, flew on a 747 from John F. Kennedy International Airport (JFK) to London Heathrow with British Airways on a ticket that costs 13,000 Avios plus £77.14 (or £294 for a return cash ticket).

He said that the first good point was the price with Avios, which are ‘easy to earn in the UK’, adding ‘it’s a great way to book a cheap one-way as cash one-way tickets on BA are incredibly expensive even in economy, £1,200-plus…’.

Nicky also rated the crew, who were ‘very friendly and experienced’. He said: ‘They came with regular drinks service and gave out snacks – milk chocolate digestives – on request and responded to the call bell very quickly.’

He also liked his seat at the back, which had space by the window for belongings.

However, he said that the 747 aircraft used on this route ‘although beautiful on the outside, has seen better days on the inside’.

He also gave a thumbs down for the quality of the headphones and the not-so-hearty second meal. 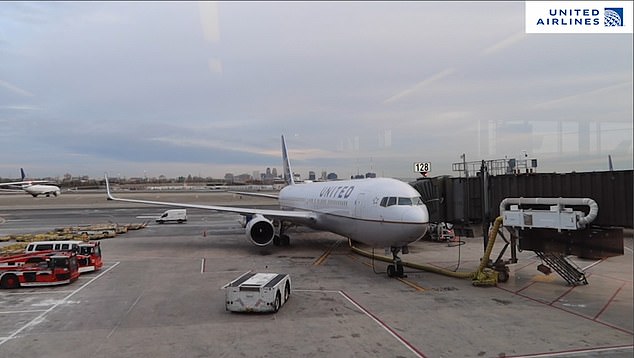 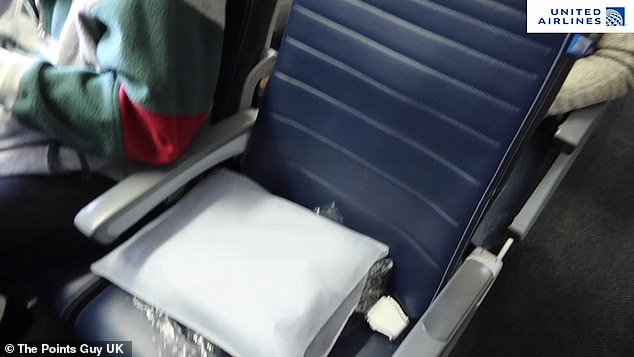 He praised the ‘really tasty breakfast and good food throughout, including unexpected snacks like sorbet and stroopwafels’ and the ‘well-stocked inflight entertainment’. The ‘clean and fresh’ cabin and toilets also impressed.

What didn’t was the ‘lengthy boarding process made more difficult by a lack of overhead locker space’. He was told to put his bag in business.

Points were also deducted for an ‘unfriendly cabin crew’ and lack of service button or seat light.

Content Producer Dan Ross flew with Virgin Atlantic from JFK to London Heathrow on a ticket costing 10,000 Virgin Atlantic Flying Club miles plus $149.20 (or £310 cash for a return). 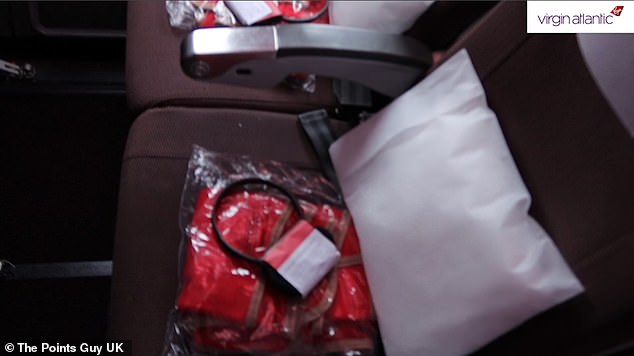 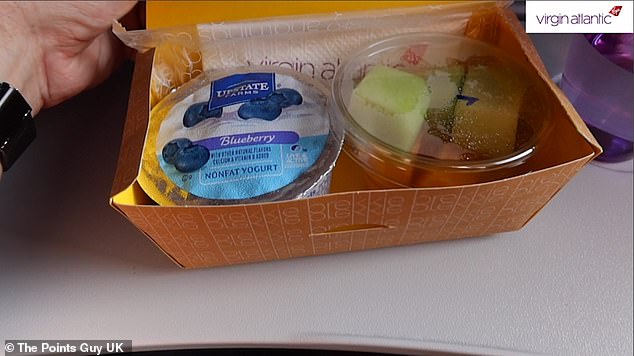 He liked the food – ‘quite tasty, maybe one of the best economy meals I’ve eaten’ – and loved the crew.

He said: ‘The crew were great with not just me but with other passengers. I couldn’t eat the breakfast due to intolerances and I was brought a bacon sandwich from Premium Economy. Various crew were helping with parents and babies and I heard one explaining that if a mother travelling on her own needed to go to the loo, one of the crew would come and sit with the baby.’

The seat, meanwhile, was ‘comfy and stayed in the recline position for the duration of the flight’.

The downsides? One was the way breakfast was served – a small one first, and a larger one halfway through the flight. ‘Make sure you get a good meal before the flight if you’re likely to be hungry,’ he said.

Dan also found a ‘couple of cleaning oversights’ on the back of the seat and the tray table and was disappointed at the lack of storage. But he stressed that it was ‘nothing worse than other carriers in economy’.

Senior Writer Ben Smithson flew with Norwegian from JFK to London Gatwick on a £116 ticket. 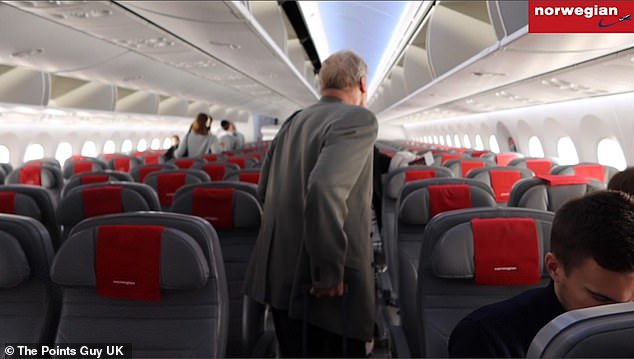 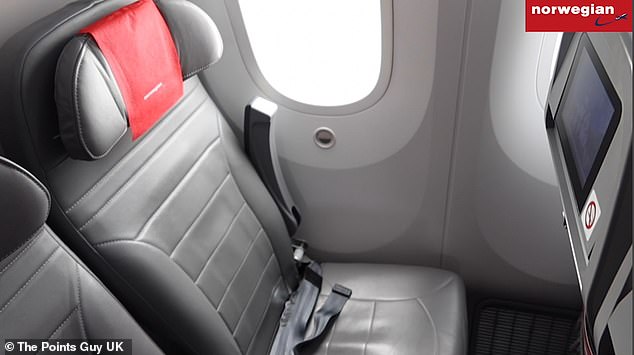 Norwegian has legroom that is ‘impressive for a low-cost carrier’

He loved the ‘civilised departure time of 11am’ and said that the legroom was ‘impressive for a low-cost carrier’. Plus there was a ‘candy snack box packed full of interesting treats to pass the time’.

And the bad? ‘The pre-ordered meals were small,’ Ben said. ‘I would suggest bringing your own food.’

Marks were also deducted for boarding lanes that were ‘not clearly signed, announced or enforced’. 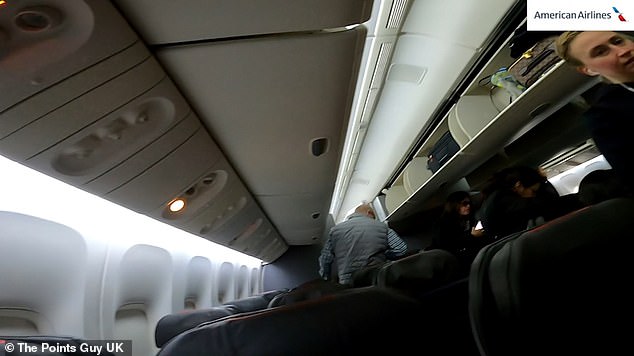 American Airlines was praised for its inflight entertainment and crew, but not the decor. Or the charge for a vodka

Praise was deployed for the inflight entertainment, which he said was ‘fast, modern and had plenty of options’.

The service also came up trumps. ‘The call button worked,’ Jean said. ‘They came up fast and gave me the chocolate I asked for.’

He also approved of the legroom and the ‘clean aircraft’.

But he didn’t approve of the fact that he had to pay $9 for the vodka in his Bloody Mary. He said: ‘The tomato juice was complimentary but the vodka isn’t for economy passengers. Other full-service airlines give this free.’

Jean was also unimpressed with the décor – ‘boring colours’ – and the aircraft in general. ‘There is nothing special about the whole flying experience,’ he concluded.

For more information on travel tips and tricks, sign up to The Points Guy UK.