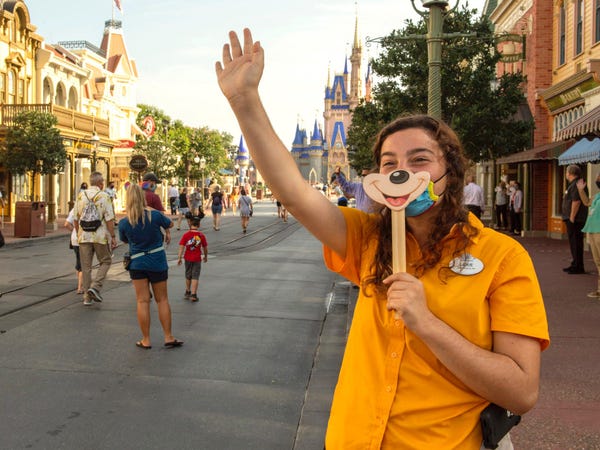 Walt Disney World has shared an update about entertainment within its Florida theme parks.

On Friday, Bettina Buckley, the vice president of Resort Live Entertainment at Walt Disney World, wrote a post for the Disney Parks Blog. She began by saying that Disney recognizes that live shows, character meet-and-greets, and street performers are all "part of the magic of visiting any Disney park."

Still, she noted that Disney has "had to make some difficult decisions" and reduce its staff in recent weeks.

To begin reopening in July, Disney put safety precautions in place that allow parkgoers to interact with characters and employees — also known as cast members — without creating a major risk of spreading COVID-19. Not only are all guests and most cast members required to wear masks, but characters are only interacting with visitors from a distance.

Unfortunately for fans, the same wasn't done for all live performances at Disney World's theme parks. According to Buckley, Disney has now had "to pause" many of its shows and entertainment experiences "for longer than originally anticipated."

"Determining which shows can return and when is a complex process," Buckley wrote for the Disney Parks Blog. "As with the rest of our phased reopening, we will also consider the guidance of health officials and government agencies in determining when the time will be right to adjust capacity, and as soon as it is appropriate, we will start to bring additional entertainment back."

"Like most of our fans, we know that our beloved entertainment cast are an incredibly special and essential part of the Disney experience," she continued. "We look forward to the day when we can welcome back more live entertainment to our parks, and we will share more news about these announcements as we're able to do so."

Buckley also mentioned in her blog post that while "it's impossible at this time to fully replace the incredible entertainment" found at Disney World prior to the pandemic, the theme park is still offering live entertainment in new ways.

Character cavalcades, or miniature parades where a few characters make their way through the parks, have been happening more frequently. You can also spot characters like Winnie the Pooh and Joy from "Inside Out" hanging out on various lawns.

"Additionally, we're featuring modified shows such as the popular 'For the First Time in Forever: A Frozen Sing-Along Celebration' at Disney's Hollywood Studios and live musical performances like the Main Street Philharmonic in Magic Kingdom or the Discovery Island Drummers at Disney's Animal Kingdom," Buckley wrote.

"This extends to our seasonal offerings, with Halloween underway and the holidays right around the corner," she added. "In fact, the fan-favorite Voices of Liberty are set to make their return and join the JAMMitors and Mariachi Cobre at the American Gardens Theatre during the upcoming Taste of EPCOT International Festival of the Holidays, beginning on November 27."

The theme-park giant recently laid off hundreds of entertainers, performers, and other employees

On Tuesday, Disney news publications reported that entertainers throughout Disney World's four theme parks had been laid off. Many of the performers are known as iconic fixtures of the travel destination, with some having performed at Disney World for decades.

Some of the groups that were laid off this week include street performers like Citizens of Main Street and Citizens of Hollywood. Entire casts of shows including "Beauty and the Beast – Live on Stage," "Festival of the Lion King," and "Hoop-Dee-Doo Musical Revue" — one of the country's longest-running dinner shows — were also laid off.

A full list of performers and entertainers who have been laid off can be found on WDW News Today.

The announcement comes just weeks after Disney said it would lay off 28,000 employees as a result of the COVID-19 pandemic

On September 29, Disney announced it would lay off 28,000 employees at its theme parks.

"As heartbreaking as it is to take this action, this is the only feasible option we have in light of the prolonged impact of COVID-19 on our business," Josh D'Amaro, the chairman of Disney Parks, wrote in a letter to employees, as previously reported by the Washington Post.

Business Insider's David Slotnick added that "Disney's parks, experiences, and consumer products segment — which incorporates its sprawling theme-park business — accounted for 37% of Disney's $69.6 billion in revenue in 2019, more than any other business unit."

Many fans are taking issue with Disney's recent blog post

In response to Buckley's letter on the Disney Parks Blog, some fans have said Disney is doing "damage control" and ignoring a major concern of fans: that massive theme-park layoffs are occurring less than two months after senior executives reportedly had their salaries restored since being reduced at the start of the pandemic.

The tweets mirror similar sentiments written with the #FireChapek hashtag, which started to pick up steam after Disney World's most recent layoffs were announced. The tag calls on Disney to fire its CEO, Bob Chapek, who some fans feel is mainly responsible for these layoffs and theme-park changes.

Representatives for Walt Disney World did not immediately respond to Insider's request for comment.

Graham Stephan Reveals How Much He Makes on YouTube a Year