Home » Travel » Britain at its best: A wander into Hardy’s Wessex Britain at its best: A wander into Hardy’s Wessex

Britain at its best: A wander into Hardy’s Wessex where the countryside is almost like a military zone

A sign on the path through the woodland made worrying reading. ‘Do not touch or pick up any suspicious objects, they may cause injury or be fatal,’ it read. ‘Stay alert when crossing tank tracks, vehicles may be quiet and travelling at speed.’

We hadn’t expected this. My brother and I had set forth on foot from the village of Moreton, crossing a quiet bend of the River Frome beyond a row of thatch cottages, before stumbling on the Bovington tank training area.

We were heading for Clouds Hill, the cottage where writer T. E. Lawrence (Lawrence of Arabia) once lived, which happens to be by Bovington Camp, little knowing we were entering an army training zone. 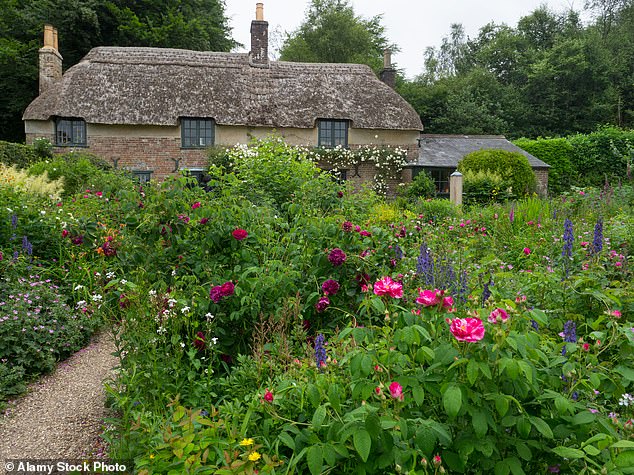 Far from the madding crowd: The birthplace in Dorset of writer Thomas Hardy

So began our week-long walking adventure, dodging the military bases of south Dorset as we learnt about Lawrence’s connections to the area and his friendship with another local, Thomas Hardy.

Lawrence, famous for leading an Arab revolt against the Turks, would visit the novelist and his wife, Florence, at their home on the outskirts of Dorchester, arriving on his motorcycle.

This choice of transport proved to be his downfall. Returning home after visiting a nearby town one morning in 1935, Lawrence rode along a twisting lane and swerved to avoid cyclists.

He was thrown off and did not recover from his injuries. A stone marks the accident spot by the Bovington tank training area.

Clouds Hill is intriguing. Inside, we discovered that Lawrence came to his rural hideaway in 1923 to escape the public eye.

After unsuccessfully lobbying for Arab independence, he wanted a quiet life and was living under an alias. It was in the woods here that Lawrence, who had enlisted with the Royal Tank Corps at Bovington, completed his colourful account of the Arab uprising, Seven Pillars Of Wisdom, with the help of the novelist E. M. Forster (who sometimes visited).

Lawrence’s grave is in the little churchyard in Moreton.

Max Gate, the Dorchester house where Hardy entertained Lawrence, was designed by Thomas himself — before turning to writing, he had trained as an architect. Hardy also invited Rudyard Kipling, H. G. Wells, Edward VIII, Virginia Woolf and Siegfried Sassoon to Max Gate (he was evidently sociable).

My brother and I reached it after a nine-mile walk from Lulworth Cove, passing yet more Ministry of Defence tank ranges.

The countryside here really is a military zone, as the booms and rat-a-tat-tat of guns occasionally remind you. Don’t worry, though: red flags and guards make straying into danger nigh on impossible. 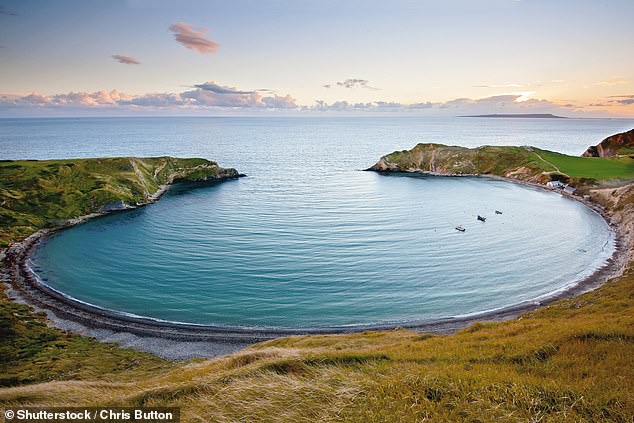 The view over Lulworth Cove on the Jurassic Coast in Dorset. Close by are Ministry of Defence tank ranges

Max Gate is fascinating, with turrets, high windows and Hardy’s study just as it was. A leather chair faces a desk with correspondence boxes and binoculars for gazing out. In this room he wrote Tess Of The d’Urbervilles (1891) and Jude The Obscure (1895).

After taking a brief look at the living room where Hardy hosted guests, we walked on to the village of Stinsford and the churchyard where his heart was buried in 1928 beside the grave of his first wife, Emma. (His other grave, containing his ashes, is in the more elevated surroundings of Poets’ Corner in Westminster Abbey.)

From this tranquil spot, we crossed rolling fields and followed lanes that Lawrence must once have whizzed along, arriving at the best-known of all destinations for Hardy pilgrims.

His family home — Hardy’s Cottage — is in thick woodland a couple of miles from Max Gate, with a pretty front garden full of flowers and shrubs, half-hiding the thatch cottage. Here, an upstairs room holds a replica of the desk at which he penned Far From The Madding Crowd (1874).

What an inspiring spot. After that came the long walk back to Lulworth, avoiding all tanks along the way.

B&B doubles at The Castle Inn, Lulworth, from £129 (castleinnlulworth.co.uk). Adult entries to Clouds Hill and Max Gate cost £7.70 each and to Hardy’s Cottage £8.40 (nationaltrust.org.uk). For information, see visit-dorset.com.