Best plane cabins of the future include beds in economy, zero waste meal trays and self-cleaning toilets – The Sun

CRAMPED seats and noisy plane cabins might be what economy passengers are used to right now, but the future of air travel could look very different.

In fact, creative designers have come up with concepts ranging from in-flight spas to seats that fold into beds. 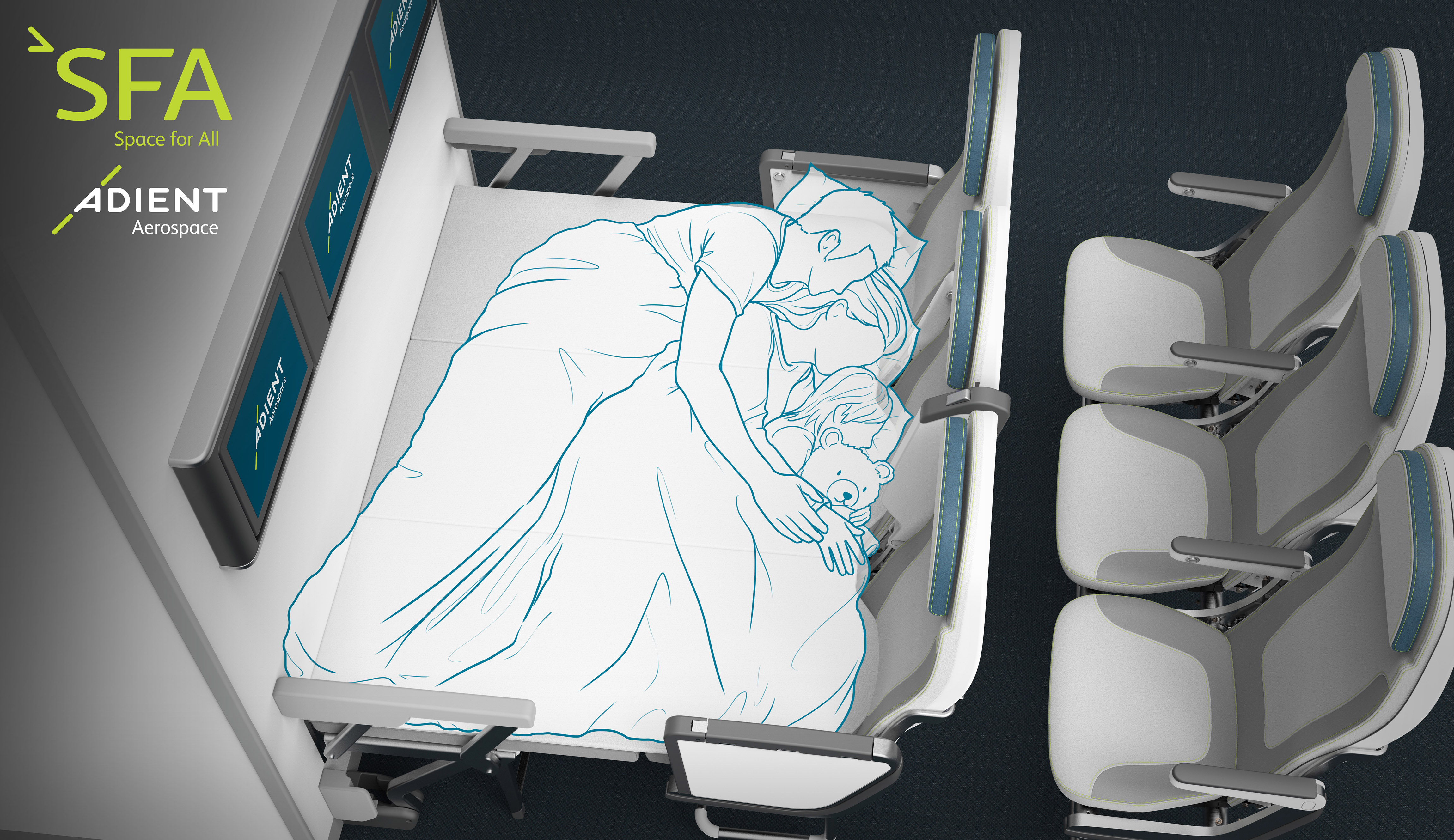 A total of 105 of these innovative concepts have been short-listed by the Crystal Cabin Awards for their 2020 awards, which are split into eight separate categories.

The entrants have come from 21 different countries, and include designs from airlines, universities and aircraft manufacturers.

Many are conceptual – meaning they're not yet available on planes – but some are already in service.

While the final winners of the awards won't be revealed until March 31, at the Aircraft Interiors Expo in Hamburg, here are some of the top contenders:

1. Extra space in the bulkhead 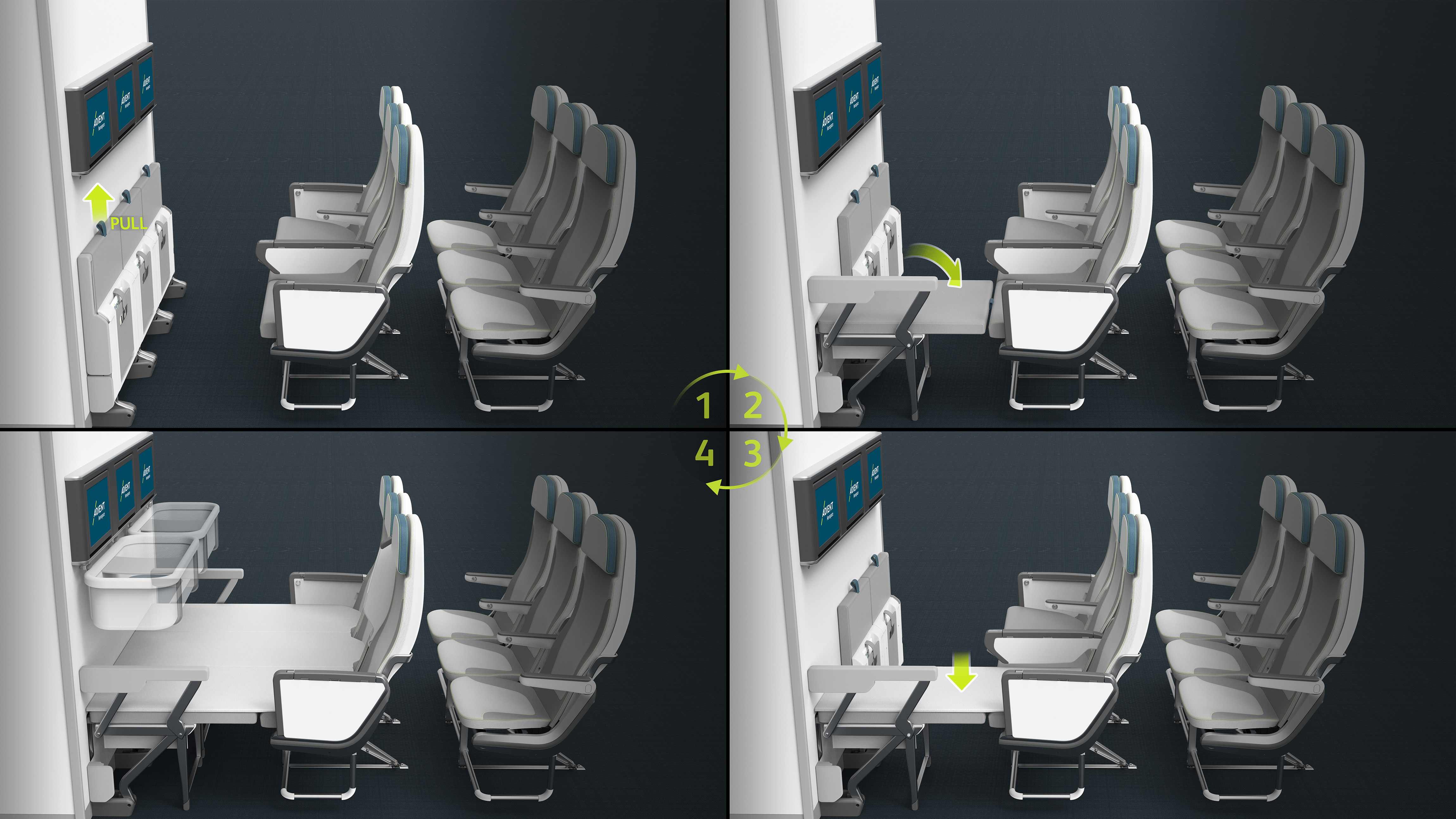 Adient Aerospace have created a Space For All concept, that gives passengers sitting at the bulkhead more space than they might have in first class.

Essentially there's a seat-extension that's attached to the bulkhead, which folds out to create a flat surface.

When this is done for all the seats in the bulkhead row, it creates an area that's big enough for a family to sleep in.

You can also extend just one or two of the seats for space to prop up your legs.

Air New Zealand already has a similar product, but for non-bulkhead seats.

2. Toilet that cleans itself 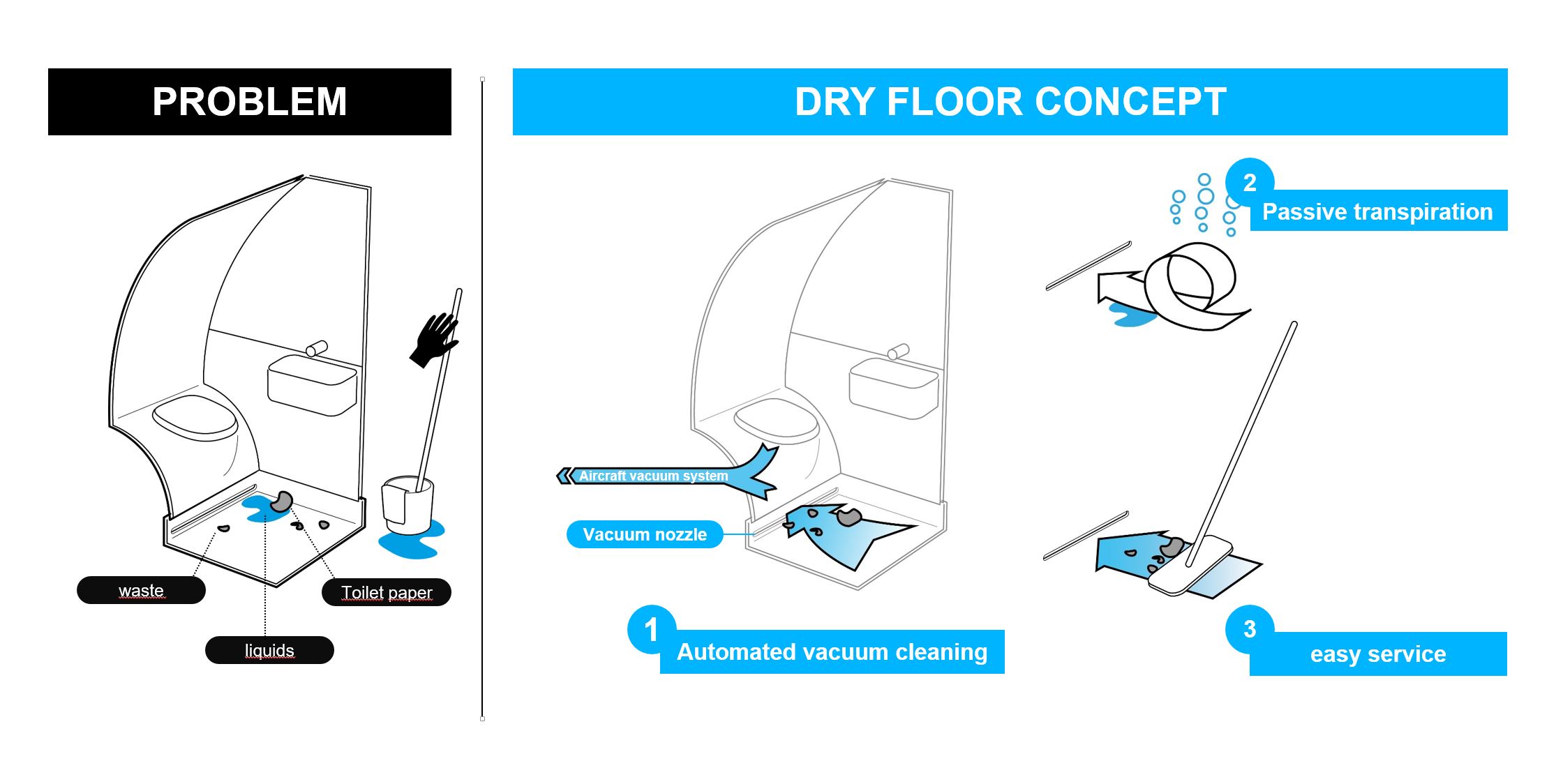 No passenger wants to contend with a filthy plane toilet, especially given how cramped they already are.

But now Airbus have come up with a "dry floor" concept that means the toilet effectively cleans itself.

It involves a vacuum being installed into the toilet bowl, near the floor, that will suck up any spilled liquids and stray tissues. 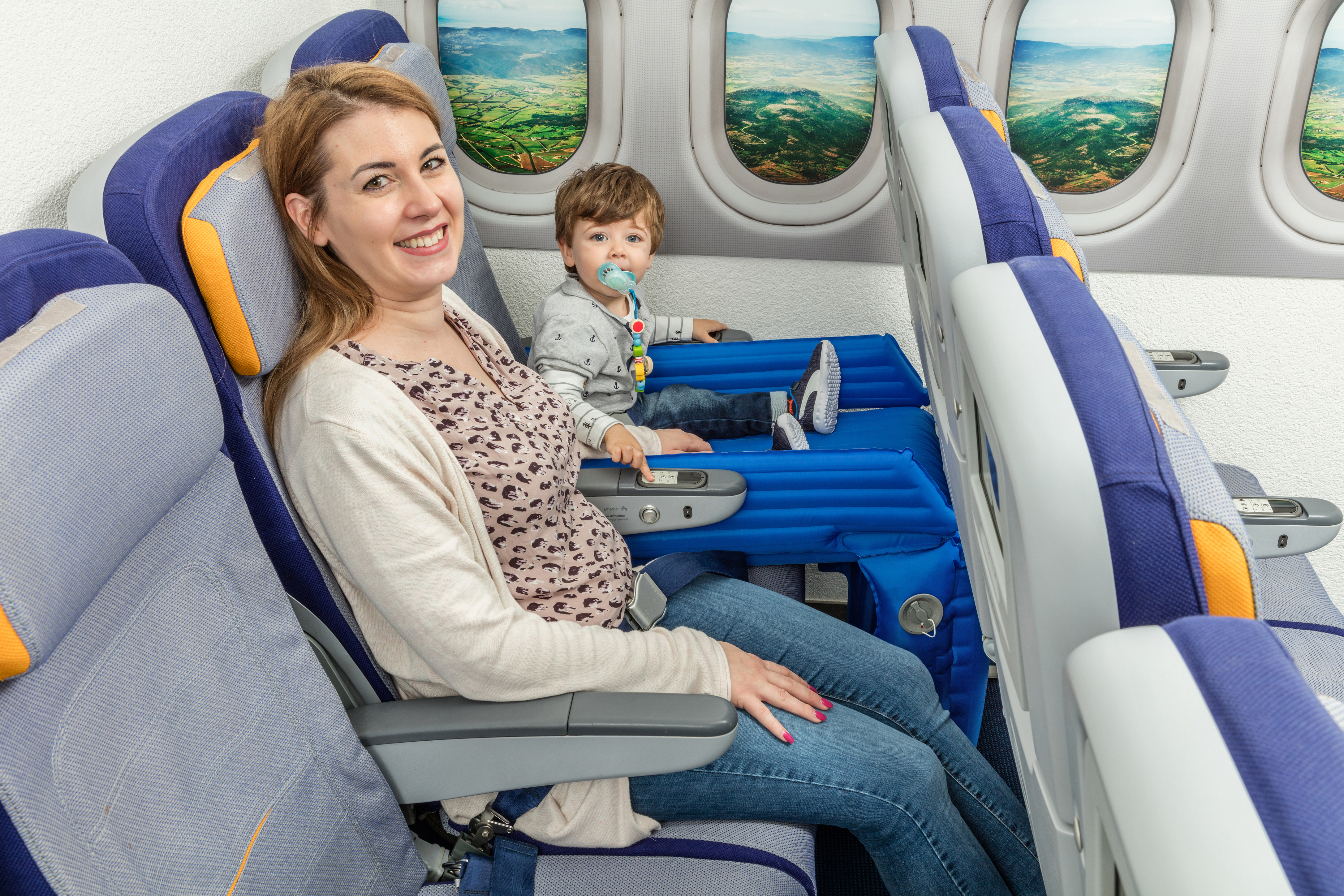 The design creates an extension so kids can enjoy extra leg room and it's something that airlines could carry on board.

It also comes with a foldaway cover that means kids can get some rest in the shade even when the plane's shades must remain open.

Seat extenders already exist, but they're not allowed on every airline. 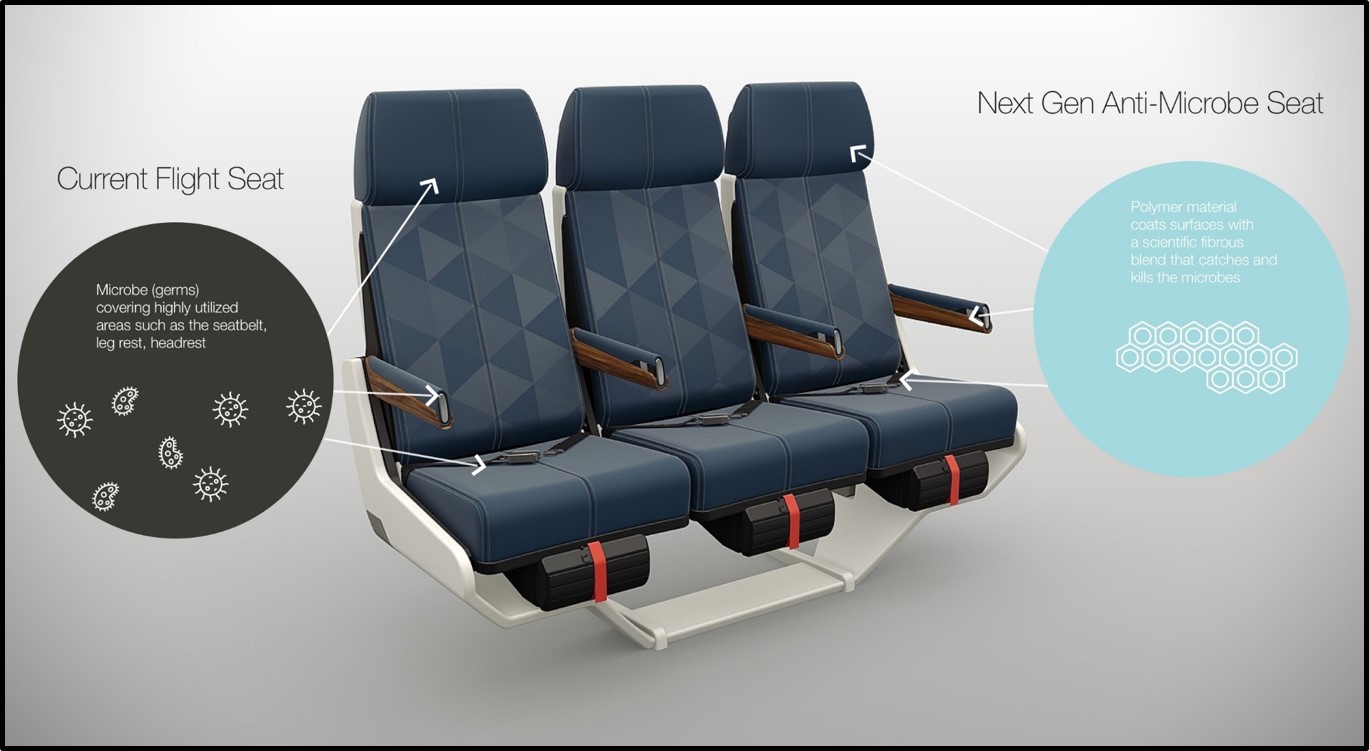 Plane seats are well-known for being havens for filth – even if they get cleaned.

But Boeing hopes a new "anti-viral seat cover" could change all that.

It uses a "next generation polymer coating" , which could be applied to armrests, tray tables and the seats themselves to prevent the spread of bugs.

It basically kills bacteria and viruses by "disrupting the microbe’s outer shell and dehydrating the area around the microbe" and would work for cold and flu bugs. 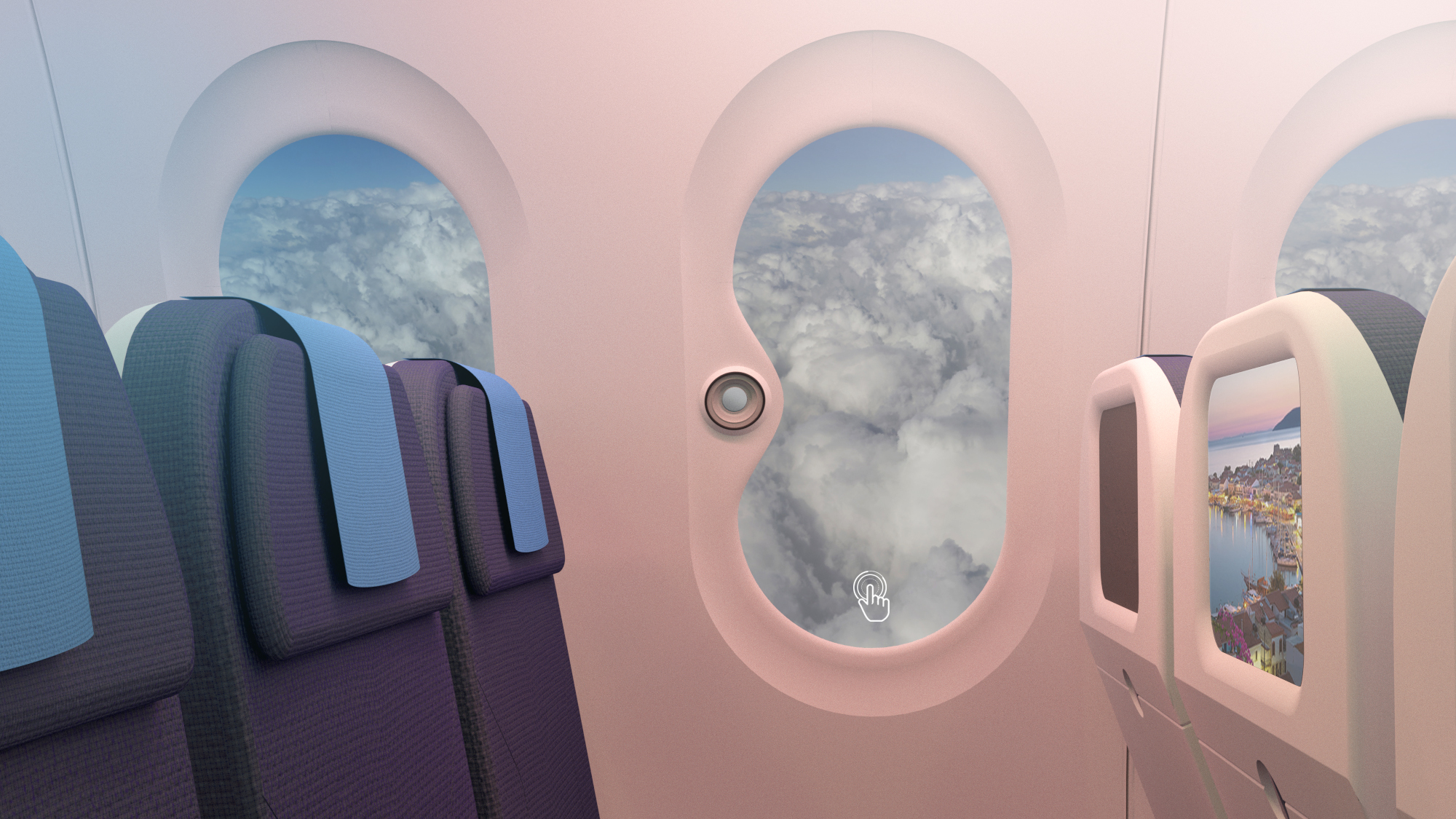 While the idea of windowless planes isn't new, with Emirates having previously floated the idea.

However, Bucharest National University of Arts reckons their SkyCheck design could make that idea a reality.

Instead of a real window, passengers would sit next to a digital version, which has live images fed to it from external cameras, and they can check out the view when they want to. 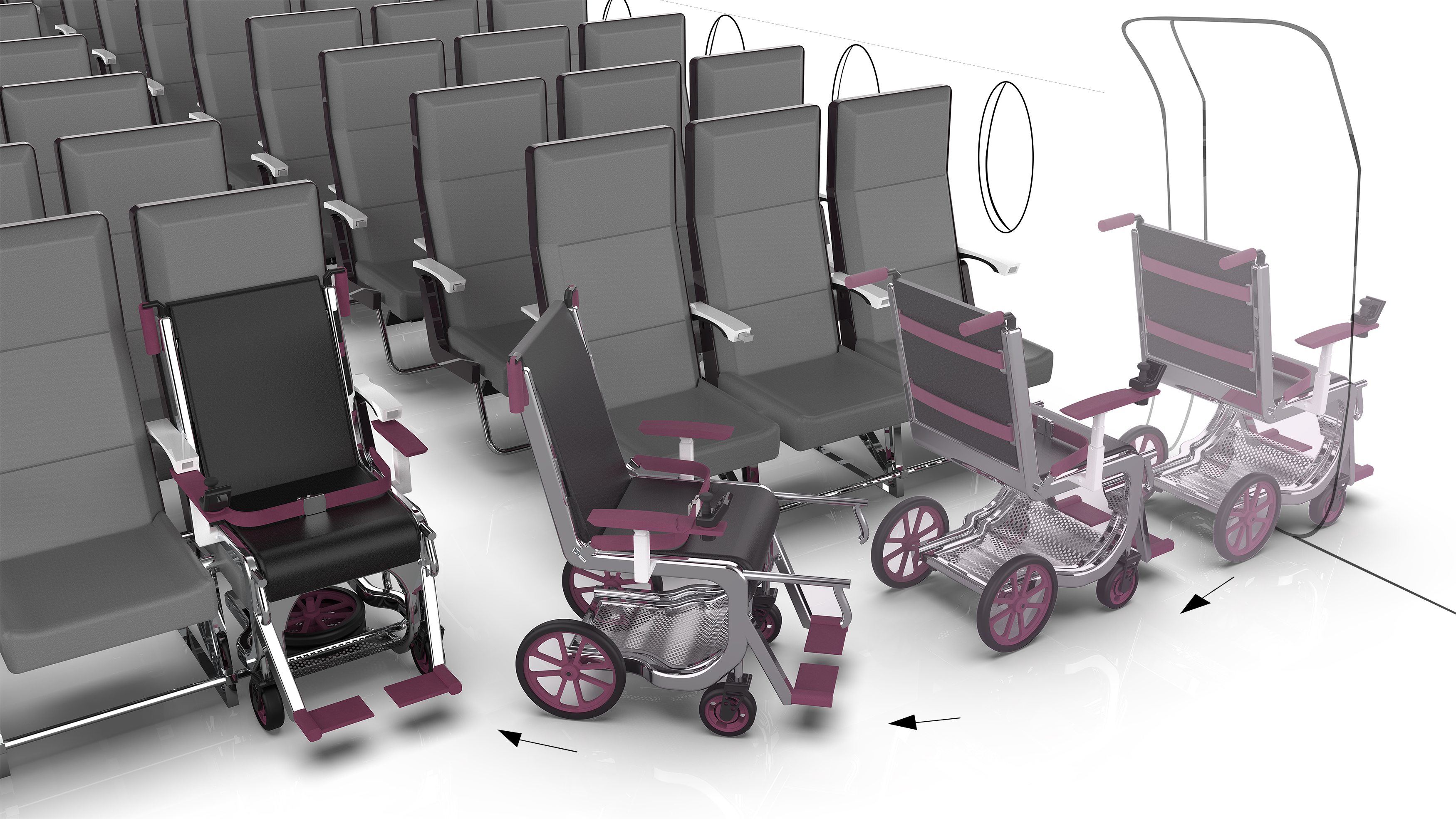 She has come with the ROW 1 Airport Wheelchair System, which allows disabled passengers to stay in their seat from the airport to the plane.

Instead of moving from wheelchair to seat, the user's wheelchair is just strapped into the designated space, and wheeled off on arrival.

7. Lighting that helps you get over jetlag 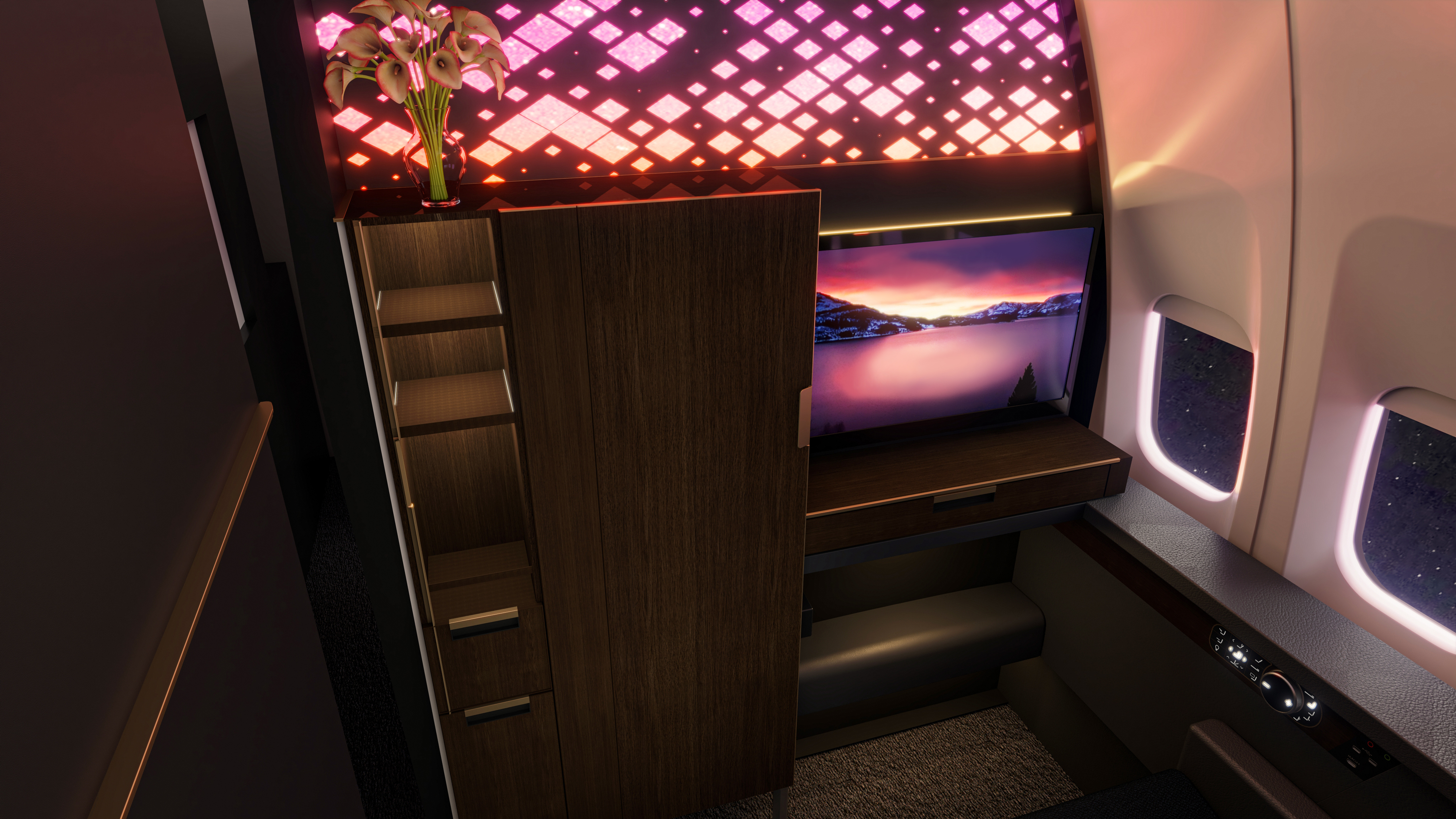 Forget about adjusting to jetlag over days or even weeks – Collins Aerospace wants you to try their Circadian design instead.

The design uses adjustable lighting conditions to help you rest on flights.

As everything can be customised to your needs, you should be able to get more sleep time on board. 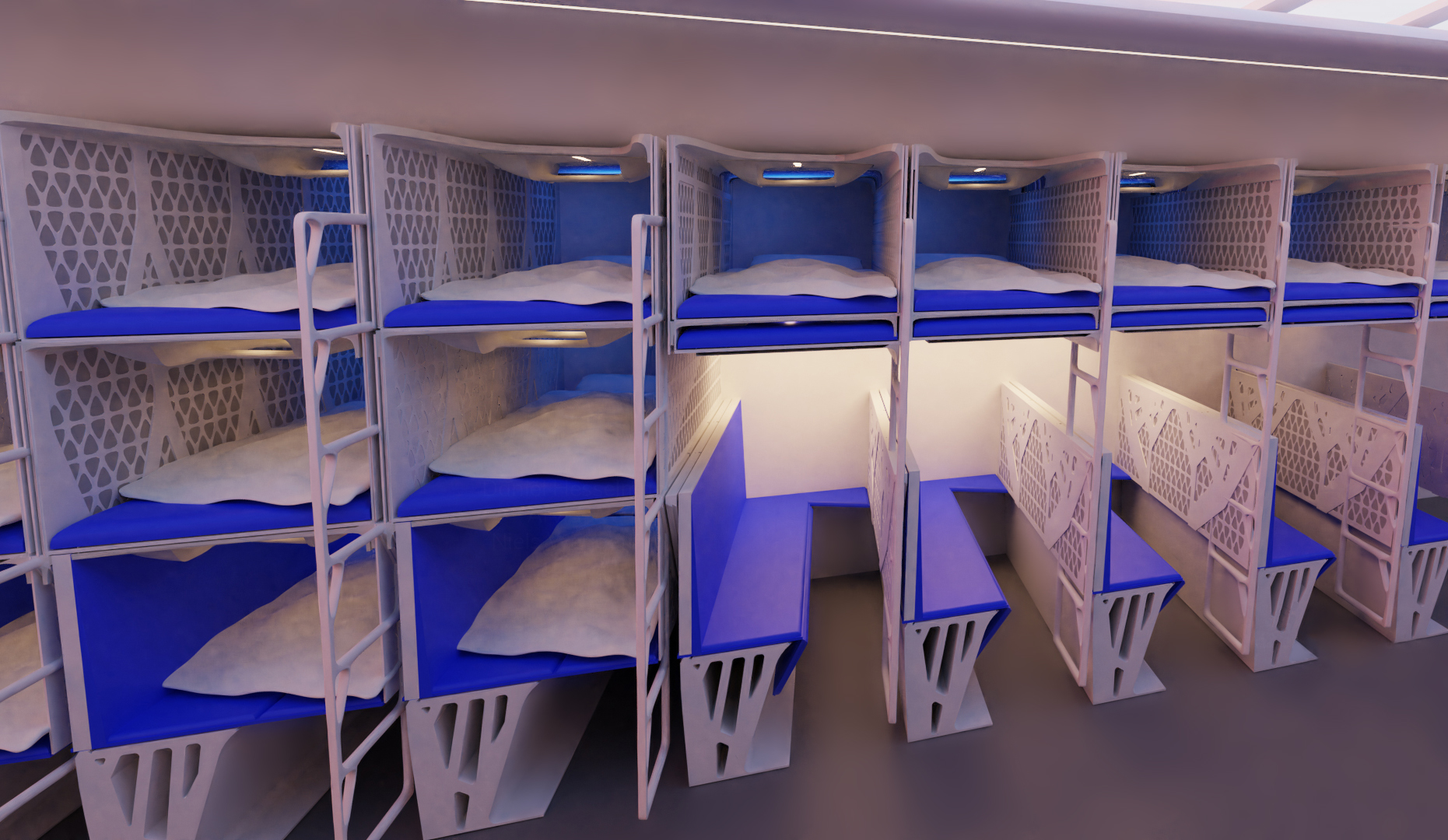 Delft University of Technology entered three different designs into the awards, and they're all designed to give passengers space to sleep.

One is a bunk-bed style cabin that allows passengers to sleep in pods before it transforms into regular seats.

Another is a bizarre-looking collapsible bed, while a third is a hanging chair that means some passengers will be suspended over others – but at least there's plenty of leg room. 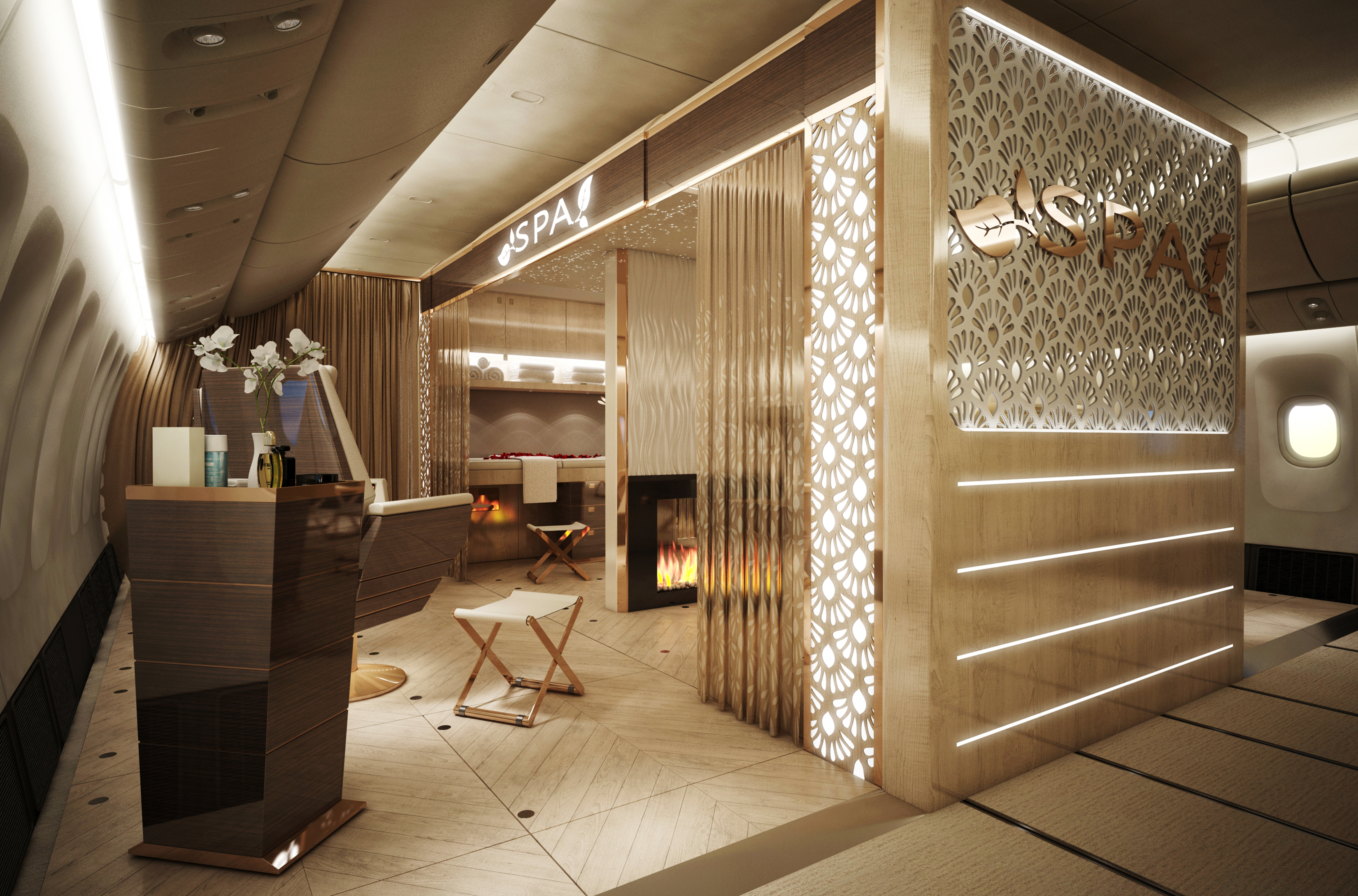 Once planes are fitted with all their equipment on board, they will rarely go through a re-design.

But Dubai Aviation Engineering Projects wants to make that a possibility.

They've created a modular design that means everything from spas to restaurants can be fitted on board or swapped off by ground crew during the plane's turnaround.

Basically, prefab interiors that can be slotted in. 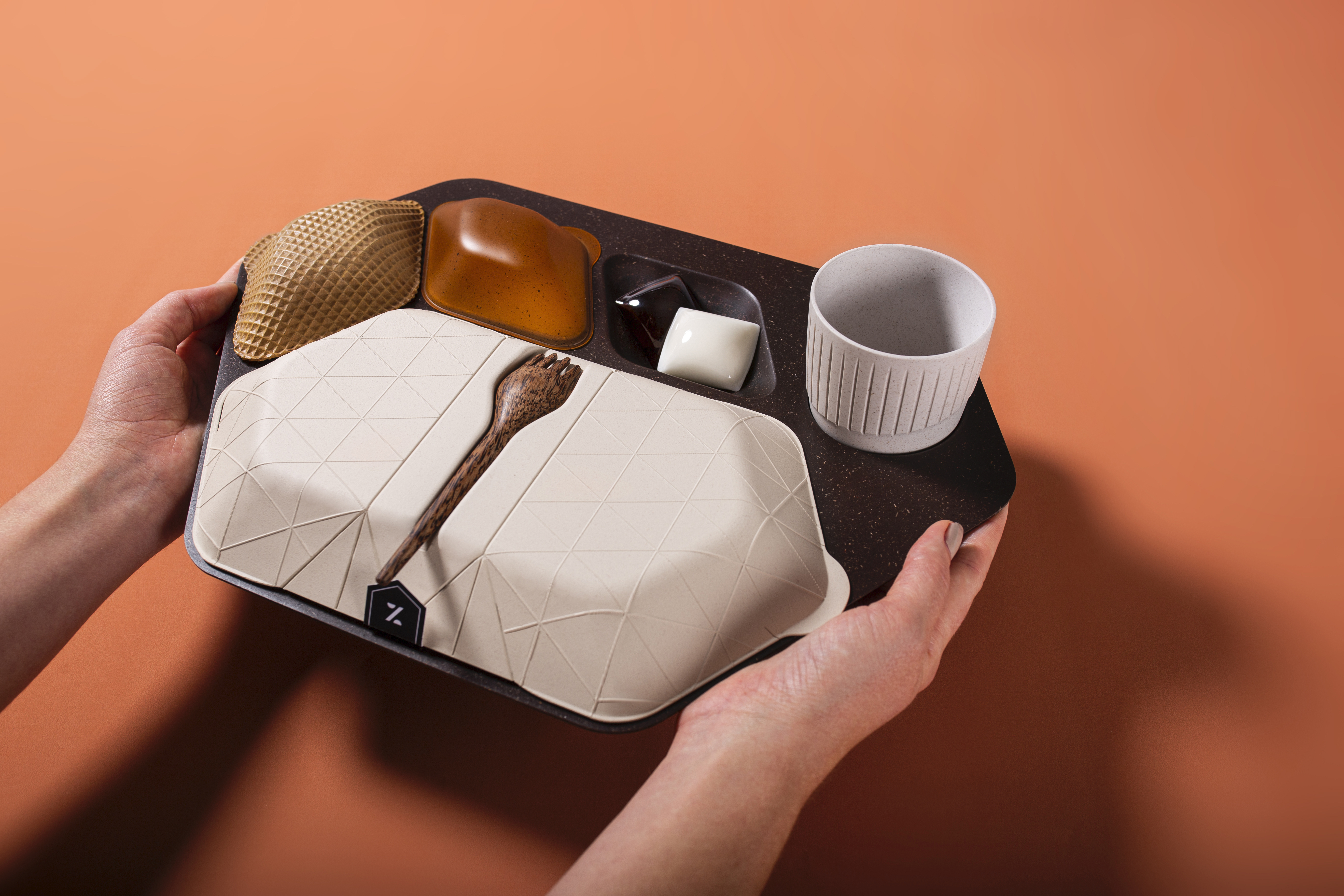 The different components are made using everything from rice husks and coffee grounds to algae and bamboo.

The best thing is, everything can be eaten or composted.

Luxury bedroom suites were among the winners for the Crystal Cabin Awards last year.

And one company even suggested stand-up seats as a possibility for planes of the future.

How Long Is The 2020 Super Bowl? There’s A Lot To Look Forward To