AMERICAN Airlines passengers were left stunned after noticing a miniature HORSE had boarded their flight.

Evan Nowak said he noticed the 'emotional support animal', which had been brought onboard by a fellow traveller, while flying on an a service from Chicago to Omaha. 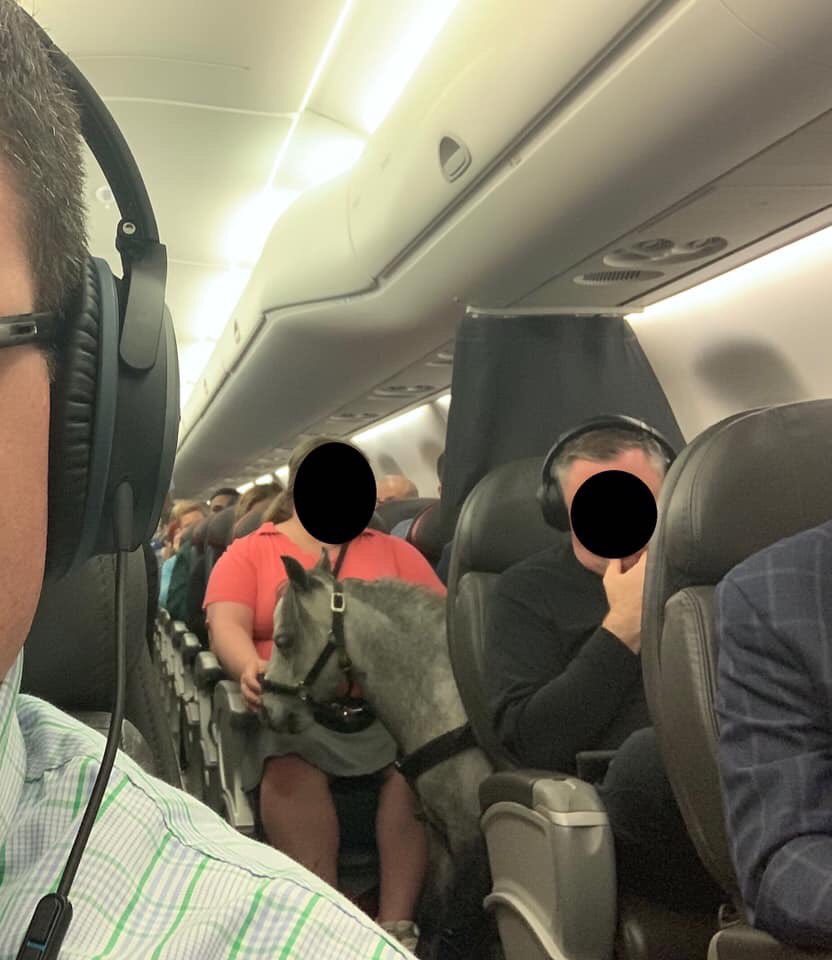 He posted the footage to Twitter, which showed the horse calmly sitting near the front of the plane in an aisle seat.

He added: "At this time we would like to begin boarding with any active duty military, families travelling with children under the age of 3, and horses…"

Another passenger, Amberley Babbage, also spotted the animal at check in, tweeting: "There was a small horse in line at the airport today and I’m so curious about it. #ORD"

They wrote: "Flirty and I took to the skies, yesterday! It was a great experience and I learned a lot. Flirty was FANTASTIC and handled it all like a pro.

"That being said, I’m going to keep travelling by car, it’s just easier on Flirty. Flying will be reserved for emergencies and such."

They added: "It’s just too difficult to make sure Flirty doesn’t inconvenience other passengers.

"Because my airport is smaller, the planes are smaller and don’t have solid bulkheads. Flirty couldn’t help jostling seat of the person in the last row of first class every time she moved.

"Once we got up to cruising altitude, she took a nap and was very quiet. But she had to rebalance quite a bit while ascending and descending and kept bumping the back of their seat through the curtain 'bulkhead.'"

Here’s a great picture from @aastews of the flight crew from American Airlines! They were fantastic and kind and very excited to see Flirty on their flight! Even the pilots had to come out to say hi.

Here’s a great picture from @aastews of the flight crew from American Airlines! They were fantastic and kind and very excited to see Flirty on their flight! Even the pilots had to come out to say hi.

According to the American Airlines website, trained miniature horses are permitted on flights as service animals.

In mid-August, the US Department of Transportation announced that miniature horses still were allowed to fly as service animals in all cabins of commercial planes, in a statement aiming to define the guidelines regarding protections for emotional support and psychiatric service cats, dogs and the tiny equines.

The announcement didn’t bind airlines to fly all service miniature horses by law, but did allude to penalties if carriers violated the new rule, WWJ reported. The Department of Transportation had not banned mini horses previously.

According to the American Miniature Horse Association, the animals often stand between two and three feet tall and weigh between 150 and 250 pounds, with an average life span of at least 30 years.

However, Delta Airlines has banned any emotional support animals on flights over eight hours.

This story was originally published on Fox News and has been reproduced with permission.