Gourmet heaven, beaches galore and even Picasso’s childhood home. That’s why we’re giving… an A* for A Coruna

If, after months of lockdown, you’re in the mood for a culinary treat, a trip to A Coruna in northern Spain ought to be on your menu. Straddling an isthmus at the north-west corner of Spain, Galicia’s second city makes for a fantastic weekend break.

It has a growing reputation as a foodie hub thanks to ‘Los Vinos’, its bustling wine district, vibrant food markets, award-winning tapas, a craft brewery and a Michelin-starred restaurant.

However, A Coruna isn’t just about gastronomy but the great outdoors as well: its unique hammer-head shape means there are beaches just a few minutes’ walk in any direction from the medieval Old Town as well as a beautiful, historic marina and ten miles of scenic promenade sweeping along the Atlantic coast. 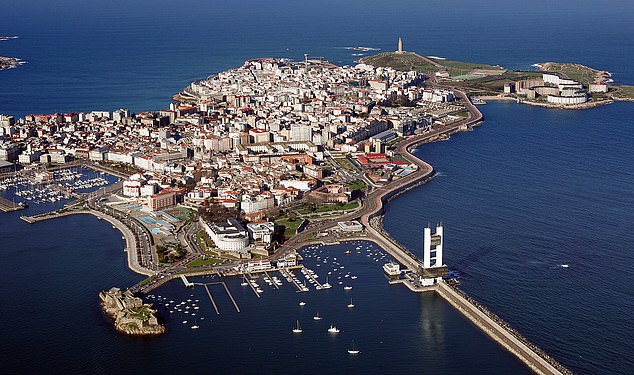 Ocean city: A Coruna on its dramatic promontory

A Coruna’s airport is five miles from the city centre, and once you’ve checked in to your accommodation you should make your first port of call the marina.

The bay itself is charming, but the historic buildings that line the main avenue are a stunning showcase of the Galician style, ancient and modern – tall, former fishermen’s cottages now clad in spectacular glass facades. One belongs to billionaire Amancio Ortega, founder of the Zara fashion chain.

Take a walk first thing and you’ll find yourself dodging cyclists and runners, while after lunch locals take their post-prandial amble.

Either way, continue along the water’s edge to San Anton Castle. Built on a tiny island and connected to the mainland by a short bridge, this 16th Century former fortress is now the city’s history and archaeology museum.

For those who want to work up an appetite, take a bike or scooter ride, or stroll along the coastal path following the northern shore of A Coruna towards the Tower of Hercules. This 2,000-year-old monument is the oldest active lighthouse in the world.

Another climb, to the top of the 180ft-high tower, will reward you with fabulous views and will most likely be done to the sound of bagpipes, a key instrument in Galician traditional music and a favourite with buskers, at least one of whom will be at the bottom of the tower to spur on climbers.

To take in views in more comfort, accompanied by first-class food and wine, then A Coruna’s Michelin-starred restaurant, Arbore de Veira, has superb vistas from its clifftop location. 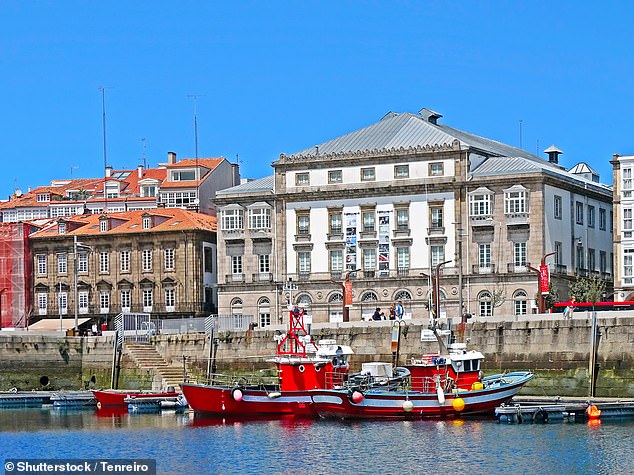 A Coruna’s gourmet reputation owes a lot to its fresh seafood, and the city’s fish market is pescatarian heaven. With stalls selling fresh octopus and barnacles – both local delicacies – lobsters, mussels, fish of all varieties and a whole load of crawling edible delights, the market is a riot of noise and colour.

The city hosts food events throughout the year such as the Bocata Gourmet festival, where chefs compete to make the best sandwiches – and extensive sampling of their efforts is most definitely encouraged.

Craft-beer fans should head to La Cerveceria in the town centre. Estrella Galicia beer (not to be confused with the more famous Estrella Damn from Barcelona) is a regional icon and was once brewed here. Head up to the restaurant to taste the beers on offer with some excellent traditional Galician food.

Explore the cobbled streets of A Coruna’s Old Town for an intimate, even romantic experience. It’s easy to lose yourself in this historic district, which dates from the 13th Century.

History buffs might want to choose as a guide British military hero Sir John Moore (aka enthusiastic actor Suso Martinez). He brings the region’s history to life with tales about the Napoleonic Wars and local heroine Maria Pita, after whom the impressively large main square is named. Here you can have a restorative pause in romantic-looking cafes that line the square before seeking out the shopping district a few blocks away. The first Zara store opened here in 1974. 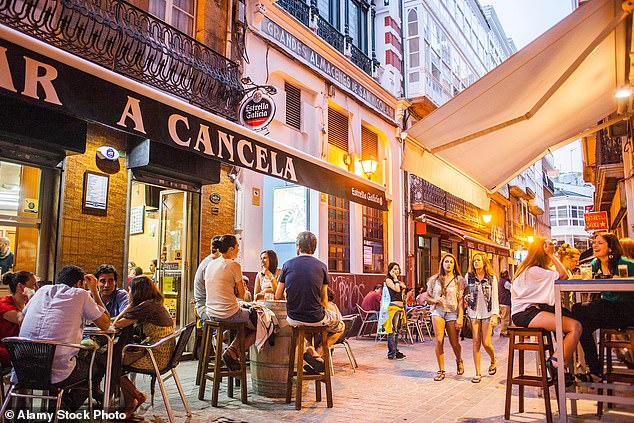 The Old Town really comes to life at night when local tapas will tempt you into bars around Barrera, Troncoso and Franja streets, known as ‘Los Vinos’

Souvenirs unique to A Coruna can be found in the brightly coloured, hand-painted ceramics of Sargadelos. Fans can also visit the factory just outside town.

Art enthusiasts will find a gem of a museum in Picasso’s townhouse childhood home, Casa Picasso. The young artist spent five years in A Coruna, moving here with his family aged ten, but art historians say this is where he became an artist, completing more than 200 works and holding his first exhibition at the age of 14.

Sadly, there are no paintings at Casa Picasso, but there are drawings and memorabilia from his years in the city.

The Old Town really comes to life at night when local tapas will tempt you into bars around Barrera, Troncoso and Franja streets, known as ‘Los Vinos’.

Each venue has its own speciality, from salt cod to cockles, arancini to smoked sardines, fried octopus to apple caviar. Local wines such as Ribeiro, or a glass of Estrella Galicia, make the perfect accompaniment. Current restrictions permitting, you may come across groups of friends enjoying an impromptu music and dancing session in one of the bars.

Even if you don’t join in, it will finish off your night in true Spanish style.

Sarah Bridge was a guest at A Coruna’s only five-star hotel, Hesperia Finisterre, where double rooms cost from £125 a night in high season (nhhotels.com). Flights to A Coruna with Vueling and Iberia cost from £150. Book tours at visitasguiadas.coruna.es, and for historical tours email [email protected]

‘It’s 100 days since we beat Covid-19 but we still can’t exercise or taste, and need inhaler’, reveal recovering Scots – The Sun
Entertainment