Workers on Tuesday began removing the body of a former slave trader, Ku Klux Klan leader, and Confederate general from a park in Memphis, Tennessee.

The remains of Confederate Lt. Gen. Nathan Bedford Forrest and his wife Mary will be moved to a museum dedicated to the Confederacy after an out of court agreement was reached last year between the local chapter of the Sons of Confederate Veterans and the nonprofit Memphis Greenspace, which owns Health Sciences Park, local station WREG had previously reported.

The park, which has contained Forrest’s tomb since the start of the 20th century, was previously named after the late racist leader and featured a statue of him on a horse. Both tributes were removed within the last eight years. 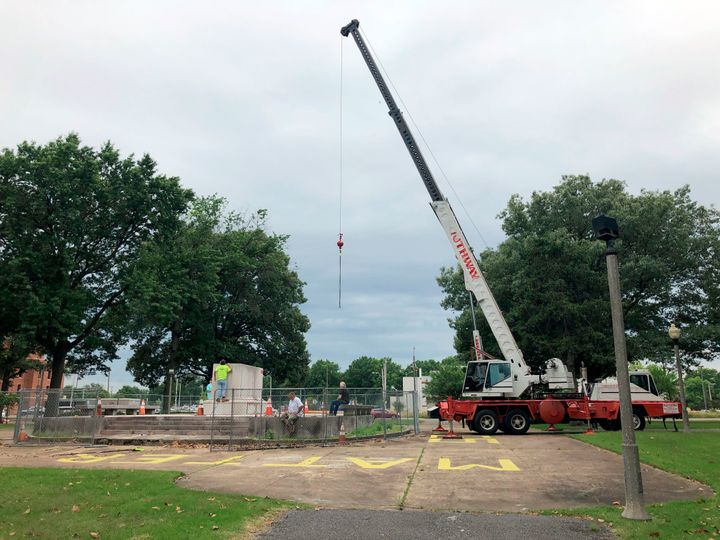 “I think this is symbolic of where we are heading as a country, as a nation, that we can be united from many,” Van Turner, president of Memphis Greenspace, told reporters, adding that he believes the move is a “win-win scenario for everyone.”

The removal of the tomb didn’t happen without protest, however.

A man who was reportedly volunteering at the site staged a one-man demonstration before local media, dumping bricks on top of a Black Lives Matter mural that had been painted on nearby pavement, and interrupting a local Black county commissioner as she tried holding a press conference.

Commissioner Tami Sawyer, who identified herself as the descendent of slaves, had pushed for the tomb’s removal. Videos posted to social media show that, as she attempted to speak with local media, Sawyer was repeatedly interrupted by the man, who hurled obscenities at her, waved a Confederate flag, and loudly sang “Dixie Land” ― a song that pays homage to the south ― behind her.

Sawyer confirmed to HuffPost on Wednesday that she has filed a police report against the man and that an investigation is underway.

Fox 13 Memphis reported Wednesday that there will now be security at the site as work continues to relocate the remains.

CORRECTION: An earlier version of this story misidentified Tami Sawyer as a councilwoman. She’s a county commissioner.