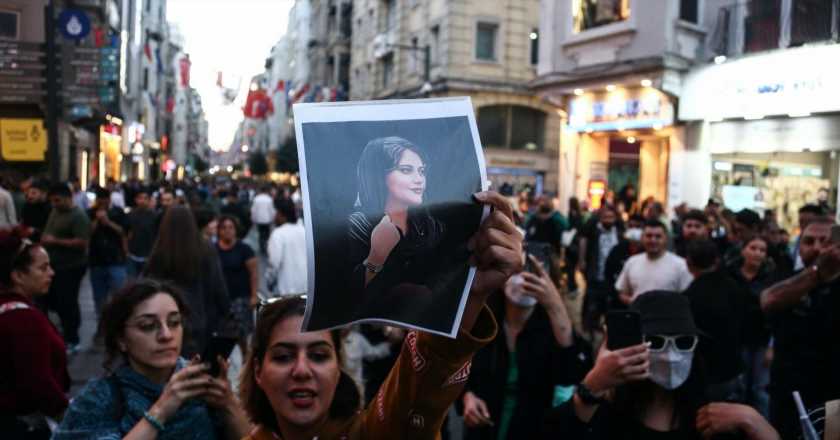 The protests were sparked by the death of 22-year-old Mahsa Amini, who died following a stay in police custody after she was arrested for allegedly breaching hijab laws.

If you’ve been on social media at all this week, you may have seen coverage of the ongoing protests being led by women across Iran following the death of 22-year-old Mahsa Amini.

Demonstrations have continued for five successive nights in towns and cities around the country after Amini, who was arrested by the regime’s ‘morality police’ for allegedly breaking the country’s hijab laws, died in hospital on Friday after spending three days in a coma.

Witnesses at the scene in Tehran told journalists that police beat Amini with a baton following her arrest, and reports have since emerged that her head was also banged against the police vehicle.

However, the police have denied mistreatment, saying that Amini “suddenly suffered a heart problem” after arriving at their detention centre and was then taken to hospital. Amini’s family have said she was fit and healthy at the time of her arrest and that doctors at the hospital hadn’t diagnosed her with a heart attack or a stroke, but told the family her brain was “no longer conscious”.

Since then, protests have erupted online and on the streets of Iran, with women cutting their hair and burning their headscarves in protest against the regime’s strict laws and treatment of Amini.

What has happened in Iran since Mahsa Amini’s death?

Women in Iran have been burning their headscarves in the streets as part of the protests.

In the days following Amini’s death, women across the country have been at the forefront of protests against the regime’s restrictive laws, which require women to cover their hair with a hijab or headscarf and cover their arms and legs with loose clothing.

The protests, which have taken place in towns and cities across the country – including Amini’s hometown of Saqez – have been met with force by police, who have used teargas, gunshots and water cannons in attempts to disperse protestors.

As part of the protests, many women have been removing their headscarves and burning them in the streets. Chants of “death to the dictator” have also been heard – a chant often used to refer to the country’s supreme leader, Ayatollah Ali Khamenei.

Iranian women have also uploaded videos of themselves cutting their hair and burning their hijabs on social media in a show of defiance against the government and in support of the protestors.

According to Hengaw Organization for Human Rights, a Norwegian organisation that monitors rights violations in Iran, five people have been fatally shot during the demonstrations in Iran’s Kurdish region, and 75 others have been injured in cities across the country over the weekend.

What has been said about the protests in Iran?

The UN’s acting high commissioner for human rights, Nada Al-Nashif has condemned the police’s reaction to the protests.

On Tuesday (20 September), the UN’s acting high commissioner for human rights, Nada Al-Nashif, released a statement expressing her alarm at Amini’s death and the police’s response to protestors.

“Mahsa Amini’s tragic death and allegations of torture and ill-treatment must be promptly, impartially and effectively investigated by an independent competent authority that ensures, in particular, that her family has access to justice and truth,” Al-Nashif said.

“The authorities must stop targeting, harassing and detaining women who do not abide by the hijab rules.”

How could tax cuts affect your wages? | The Sun