Online reviews can make or break small companies, but one woman has revealed that not all posts can be trusted.

Writing under the handle ‘u/Sweet_Tangerine50’, the Reddit user from San Diego explained how she had received a stream of messages urging her to improve the rating she left on an Amazon seller’s nail varnish remover.

The company had sent the woman free samples in the hopes that she would leave positive feedback along with five stars- which the refused to as it had ruined her nails.

The user posted their lengthy interaction on the online forum, revealing how the company had asked if there was anything they could do to persuade her to improve the review. 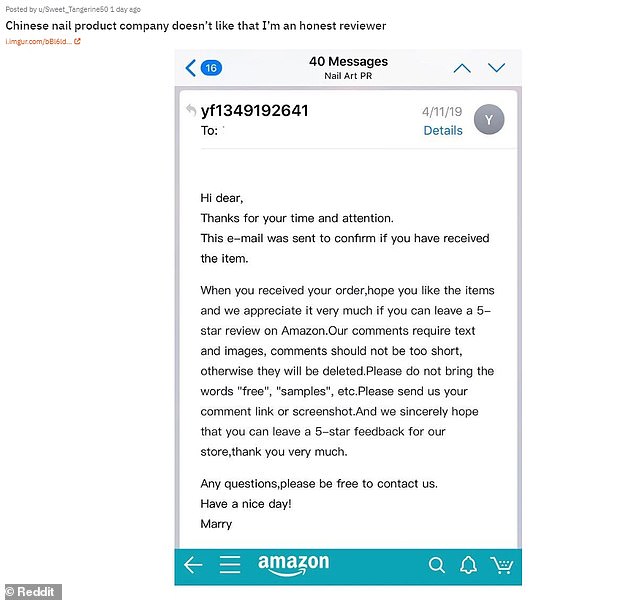 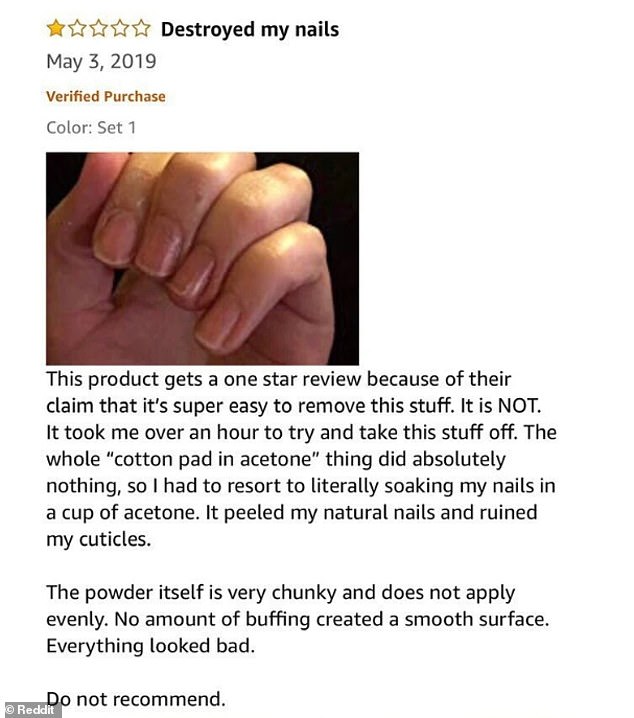 Writing under the handle ‘u/Sweet_Tangerine50’, a Reddit user from San Diego explained how she had received a stream of messages urging her to improve the rating she left on an Amazon seller’s nail varnish remover

The reviewer, who refused to falsely praise the product, claimed the remover was chunky and damaged her natural nails.

The woman’s review read: ‘This product gets a one star review because of their claim that it’s super easy to remove this stuff. It is not.’

She continued to describe how it had damaged her nails, leaving one star and adding ‘do not recommend’.

Responding to her message privately, the seller wrote: ‘When you received your order hope you like the items and and we appreciate it very much if you can leave a  five star review on Amazon’.

However the communication became more strained when the woman refused to leave a five star recommendation, with the seller demanding: ‘Sorry our request is four of five stars. Can you modify your comment’. 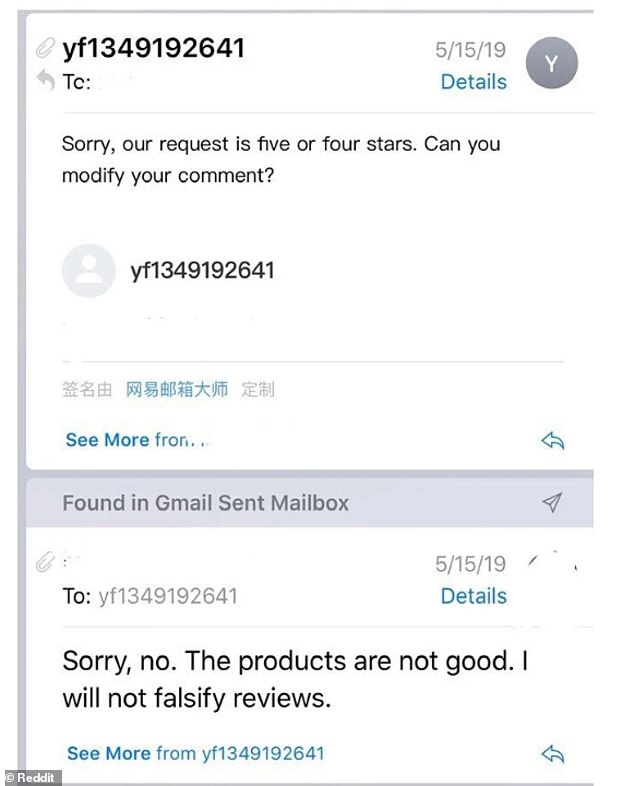 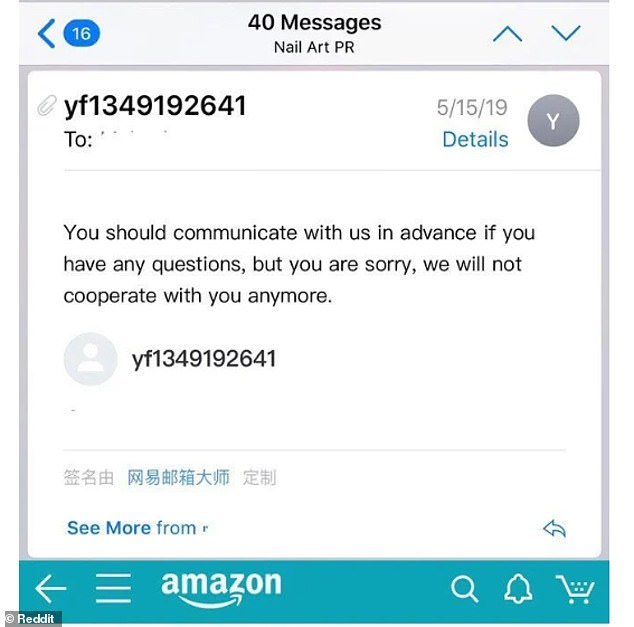 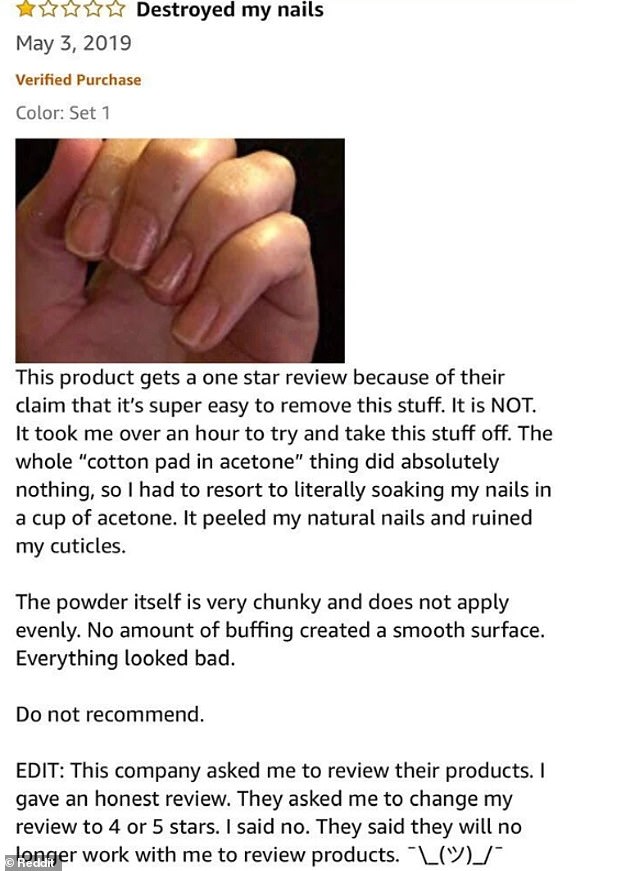 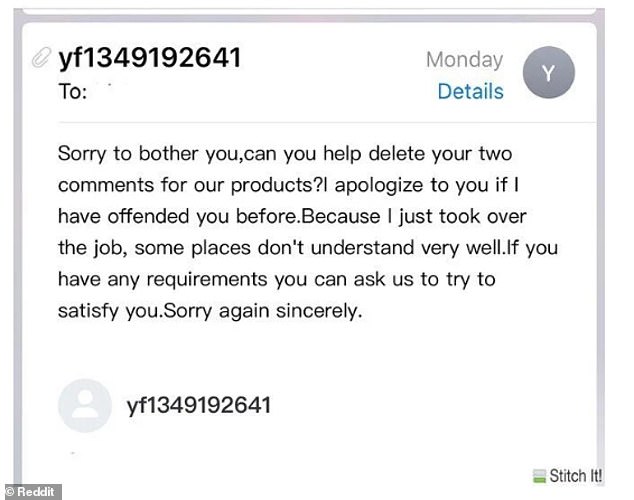 The woman who was sent free nail varnish remover in exchange for a positive Amazon review, shared a lengthy post on Reddit of how the company had asked her to improve her feedback

And a stream of shocked responses to the thread argued that the company had broken the rules of Amazon and should have their page closed.

One person wrote: ‘Former Amazon seller here- what that company is doing is highly against Amazon’s rules. Multiple rules, in fact.

‘If you’re feeling harsh, report it to Amazon. May very well shut their account down for manual review and possible ban.

‘They are not ******* around with review manipulation these days.’

Another said: ‘It is crooked of them. It is good you are honest with feedback. Those who cannot accept the truth are doing bad business.’

A number of contributors to the thread argued the seller was being misinterpreted due to the language differences.

Writing under the handle ‘Weakyleaky,’ a user urged others to not escalate the situation any further.

He wrote: ‘Calm down people, English is not their first or even second language. No need to **** on them for that (that’s just douchey), there’s already plenty of material in the subject. (sic)’

Many people began sharing their own experiences with being asked by sellers to lie in their Amazon reviews.

One person said: ‘I’ve had a couple of companies try to harass me into changing my bad reviews on Amazon. One of them was for this amazingly bad alarm clock that couldn’t even keep time, and you couldn’t even read the numbers on it, the display was so dark.

‘They kept telling me they’d send me a new one if I change my review. Why would I want a new one if the flaw was in the extremely poor design?’.

Another wrote: ‘I had an interaction like this via Amazon with a company in China. I bought a shower cap that was clearly made for a small child’s head and already ripping apart.

‘I was begged to change my review to five stars and they will give me several brand new shower caps. Uhhhhhh no thanks. I think they emailed me at least ten times to change it.’

A third added: ‘Sorry that happened to you. I also was pressured to change a one star review to a five. I simply ignored their messages.’

Lady Gaga, Tyra Banks and the Disneyfication of Fashion

Deadwood Has Drawn Fortune-Seekers Since 1876. HBO Is Only the Latest.
Entertainment