With his latest “Jeopardy!” victory, long-running champ James Holzhauer is less than $10,000 from reaching another milestone.

Holzhauer, 34, eked out his 26th win Thursday on the popular quiz show. The professional sports gambler from Las Vegas actually trailed after the first “Jeopardy!” round and was only $5,400 ahead of challenger Nate Scheffey heading toward the last question in Final Jeopardy!

“The game is not a runaway for a change,” host Alex Trebek noted at the end of the Double Jeopardy! round, as Holzhauer held his narrow lead.

The final category was Jazz Classics, with the clue: “In one account, this song began as directions written out for composer Billy Strayhorn to Duke Ellington’s home in Harlem.”

The two men answered with the correct question, “What is ‘Take the A Train?'” with Holzhauer betting $20,908 to pull away from runner-up Scheffey and win by more than $16,000. 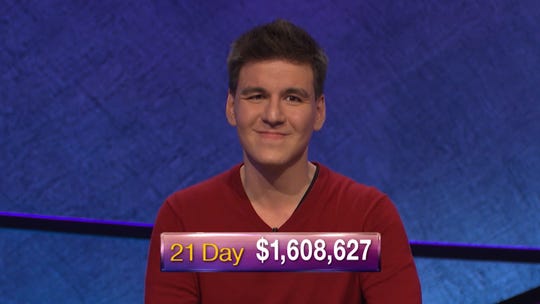 James Holzhauer, seen after a recent 'Jeopardy!' win, is getting closer to a prize-money milestone with each victory. (Photo: Sony Pictures Television)

Holzhauer’s $52,108 final tally, smaller than his average haul but huge in comparison to the average winner, raises his total prize amount to $1,991,135, just short of the $2 million barrier.

Holzhauer would be just the second “Jeopardy!” contestant to cross that threshold. Ken Jennings, the show’s top money winner, took home $2,520,700 during his 74-win run. Holzhauer is No. 2 to Jennings in show victories, too.

Although Holzhauer is nearly 50 wins behind Jennings’ total, a sign of the all-time champ’s game skill, the current champ’s aggressive clue selection and wagering approach could push him past Jennings’ money total in seven more contests if he keeps winning games at his daily average of $76,582.

To put the impressive money totals in perspective, Holzhauer’s average daily winnings are just a smidge below the previous one-day high, $77,000, set by Roger Craig in 2010.