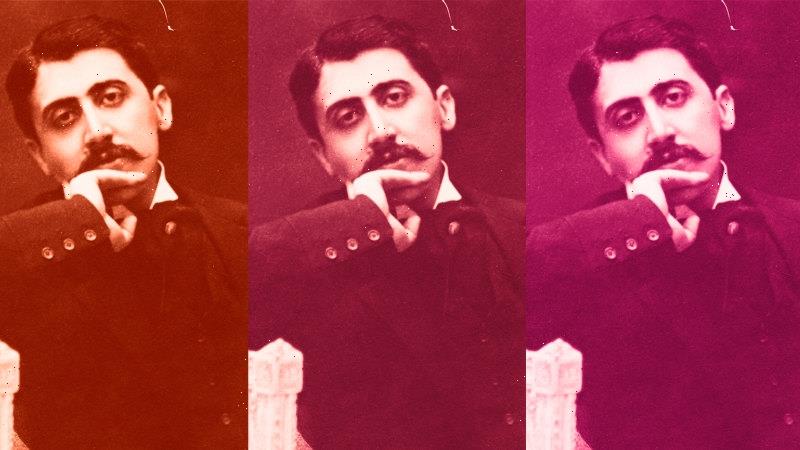 Around 20 years ago, I went to the Carnavalet Museum in Paris to see Marcel Proust’s bed. The mission was less frivolous than it sounds. Proust’s bed isn’t any old bed. He didn’t just sleep in it. He wrote millions of words while lying in it. It was his office, his workstation.

In 1909, at the age of 38, he hit the sack more or less permanently to write the great novel he’d always believed was in him. He lined the walls of his Paris apartment with cork to keep out the street noise. He wrote by night and slept by day. The novel would be called A la recherche du temps perdu: In Search of Lost Time. It took him 13 years to complete. The finished work ran to 3,000 pages, or 1.25 million words. 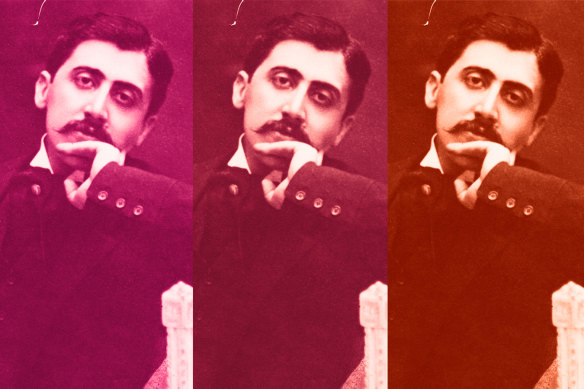 What can a neurotic Frenchman who’s been dead for a century tell us about what it’s like to be alive today?Credit:Aresna Villanueva

A hundred years ago this week, on November 18, 1922, Proust died in his bed at the age of 51. By then the first four volumes of his masterwork had been published, and they’d made him world famous. The remaining three would appear posthumously. Proust was still revising them when he died. Right to the end he kept compulsively adding sentences in the margins.

The day after Proust’s death, the poet Jean Cocteau came to pay his respects. Proust’s body was still on the bed. The manuscript pages of his novel sat in neat piles on the mantelpiece, “continuing to live,” said Cocteau, “like a ticking watch on the wrist of a dead soldier.”

I was expecting a lot of Proust’s bed, then. I was picturing something grand and next-level comfy, possibly a king size, at the very least a queen. But it proved to be a rickety-looking single, with a visibly subpar mattress. It looked like something from Alcatraz.

Bedding technology has come a long way since Proust’s day. The art of novel-writing, on the other hand, reached an all-time peak in Proust’s rudimentary cot. Nobody has ever written a greater novel than Proust’s, and the chances that anyone ever will are close to zero.

Proust’s life got off to an unpromising start. He was a sickly child. His parents feared he wouldn’t survive infancy. Born to a Catholic father and a Jewish mother, he was raised a Catholic but never forgot his Jewish heritage, partly because French anti-Semites wouldn’t let him.

He grew up with a range of phobias and allergies. He had digestive issues. He was a chronic insomniac. At the age of 9, he had his first asthma attack. The disease severely compromised the rest of his life. He had as many as 10 attacks a day, lasting up to an hour each.

He loved nature but had to avoid going out in it. Eventually, he stopped leaving his apartment except at night, swaddled in many layers of clothing. He was an early adopter of a cutting-edge service called the theatrophone, which allowed subscribers to attend the opera virtually by telephone.

Proust wasn’t quite a bubble boy, but he was getting there. He was “a man born without a skin,” said a friend. His extreme sensitivity meant that he might one day write a great novel, if he lived long enough to get the job done. “He was,” wrote Clive James, “always dying.” 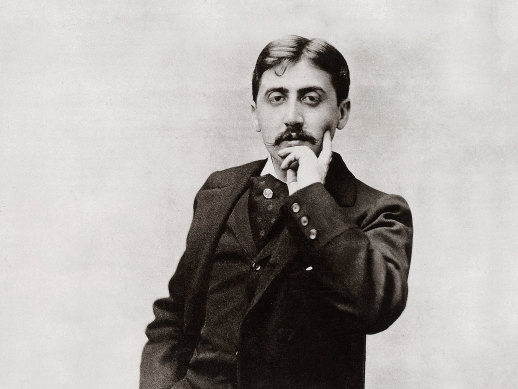 Marcel Proust, photographed by Man Ray in 1922. This week marks the 100th anniversary of his death.

For someone who was racing the clock, Proust took a long time to get down to work. As a young man he seemed to do nothing but drift around in Parisian high society, sucking up to members of France’s decaying aristocracy. His mother’s family had made a fortune manufacturing porcelain, so Proust wasn’t obliged to earn a living. He was always generous with his inherited wealth, though. When his young niece expressed an interest in flamingoes, he seriously considered buying her one.

For years people took Proust for a dilettante and social climber. But all along he was gathering material for the big novel that he would one day sit down – or lie down – to write. By 1913, he’d finished the first volume, Swann’s Way. After a succession of publishers rejected it, Proust paid for publication himself.

The book was a hit. The sequel was finished, and set in type, when the Great War began in 1914. That changed everything. Proust’s publisher was drafted into the army, and the printer’s lead was requisitioned for military purposes. For the duration of the war, publication of Proust’s novel was put on ice.

Proust capitalised by expanding the work dramatically. He’d conceived it as a trilogy. Now there would be five more volumes before the last one, which would be entitled Time Regained. The book became a heroic attempt to redeem all the lost hours of Proust’s life – to create something that would oppose the remorseless one-way flow of time, and maybe even cheat death itself.

If you can’t read French, don’t let that put you off giving Proust a try. Reading him in translation – or listening to the 153-hour audiobook of the English version, read by Neville Jason – is still one of the great literary adventures you can have.

Proust was first translated into English by a Scotsman named Charles Scott-Moncrieff, who gave his translation a title taken from Shakespeare’s Sonnets: Remembrance of Things Past. “It destroys the title!” Proust complained, when that translation began appearing. Subsequent English versions have gone with the less poetic but more literal In Search of Lost Time.

Proust took the gamble that great artists have always taken… That his experiences, even at their most outré, would resonate with the rest of us.

Whatever translation you read him in, it’s important to know what to expect from Proust. Don’t expect a rollicking plot. On the surface of the book, very little happens. A publisher who rejected Swann’s Way said: “I may be dense, but I fail to see why a chap needs thirty pages to describe how he tosses and turns in bed before falling asleep.”

A tip for philistines: never begin a sentence with the words “I may be dense, but …” Reading Proust for the plot is like reading Dan Brown for the intellectual fireworks. Proust isn’t the kind of writer who tells you a slick story and leaves no imprint on your mind. Reading him is like making a lifelong friend.

Indeed, you soon find that it’s Proust who’s reading you, and helping you read yourself. He’s always moving from the particular to the general, always looking to draw universal lessons from his private sufferings. “Happiness is good for the body, but it is grief which develops the strength of the mind,” his narrator observes in the final volume.

In his short life, Proust endured more than his share of suffering. Above all, what he suffered from was love. In the novel, his narrator has a series of monster crushes on female characters who always fail to love him back. Finally, he spends two whole volumes driving himself clinically nuts over an elusive young woman named Albertine. Aching for Albertine, the narrator comes down with the most intense case of sexual jealousy ever described in literature. He makes Othello look like Jeff Lebowski.

Was the narrator of the book Proust himself? Was his novel really an autobiography? The narrator doesn’t discourage that conclusion. At one point he jokes that we might as well just call him “Marcel”.

But there were differences between Proust and his narrator. For example, Proust’s narrator is straight. Proust was gay. In the society he lived in, this automatically lent a tragic dimension to his love life. Love was always an ordeal for Proust. He called it “the crater from which nothing but catastrophe can emerge”.

The narrator’s fictional passion for Albertine echoed Proust’s real-life obsession with a burly chauffeur named Alfred Agostinelli, who was emphatically straight. Agostinelli had a wife. Worse still, he cheated on her with other women. This was an excruciating double whammy for Proust, and it explains why Albertine, in the novel, has an unconvincing habit of jumping into bed with the nearest female whenever the narrator’s back is turned.

In the novel, Albertine is killed when she’s thrown from a horse the narrator has bought for her. In real life, Agostinelli died in a plane crash, while taking flying lessons paid for by Proust.

“Griefs, at the moment when they change into ideas, lose some of their power to injure our hearts,” Proust writes in the novel. When he made his narrator a straight man, and when he turned Alfred into Albertine, Proust wasn’t dodging the truth. He was reshuffling the surface details of his life to shine a definitive light on the larger truth that interested him, which was human love.

Proust didn’t stay in his lane. He would have scoffed at the idea that he even had a lane. There was just one big pool that all human beings were swimming in together, and Proust was determined to cover every cubic inch of it. He didn’t write as a representative of the gay, asthmatic, half-Jewish half-Catholic community. He was a gay man writing about the human experience – and writing about it as magnificently, in his own way, as Shakespeare did in his.

In other words, Proust took the gamble that great artists have always taken. He piled all his chips on the proposition that as quirky as he was, he was also pretty much like everybody else. He wagered his whole career on the assumption that his own experiences, even at their most outré, would resonate with the rest of us.

It’s fashionable to believe there’s no such thing as human nature, and that we’re all just products of the time and culture we happen to live in. Proust’s novel makes a mockery of that notion. Its pages are still as charged with relevance and wisdom as they were a hundred years ago, when Cocteau saw them ticking like a watch on a mantelpiece in Paris.

What can a privileged and neurotic Frenchman, who has now officially been dead for a century, tell us about what it’s like to be alive today, 100 years later, on the other side of the world? Only everything.

The Offspring Share Cover Of ‘Bells Will Be Ringing’