BLY, Ore. (AP) — Fierce wildfires in the northwest are threatening American Indian tribal lands that already are struggling to conserve water and preserve traditional hunting grounds in the face of a Western drought.

Blazes in Oregon and Washington were among some 60 large, active wildfires that have destroyed homes and burned through close to a million acres (1,562 square miles, 4,047 square kilometers) in a dozen mostly Western states, according to the National Interagency Fire Center.

In north-central Washington, hundreds of people in the town of Nespelem on the Colville Indian Agency were ordered to leave because of “imminent and life-threatening” danger as the largest of five wildfires caused by dozens of Monday night lightning strikes tore through grass, sagebrush and timber.

Seven homes burned but four were vacant and the entire town evacuated safely before the fire arrived, said Andrew Joseph Jr., chairman of the Confederated Tribes of the Colville Reservation that includes more than 9,000 descendants of a dozen tribes.

Monte Piatote and his wife grabbed their pets and managed to flee but watched the fire burn the home where he’d lived since he was a child. 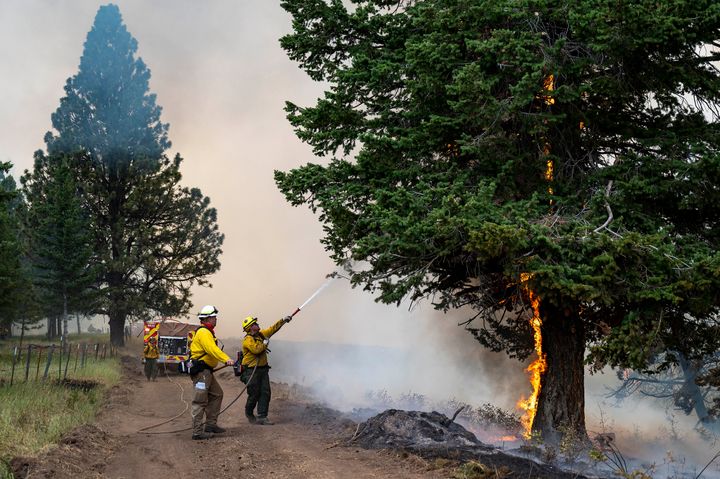 The confederation declared a state of emergency Tuesday and said the reservation was closed to the public and to industrial activity. The declaration said weather forecasts called for possible triple-digit temperatures and 25-mph (40-kph) winds on Wednesday into Thursday that could drive the flames.

In Oregon, the lightning-sparked Bootleg Fire that had destroyed at least 20 homes was raging through lands near the California border on Wednesday. At least 2,000 homes were threatened by the fire.

Mark Enty, a spokesman for the Northwest Incident Management Team 10 that is working to contain the fire, said that since he arrived to the area last week the Bootleg Fire has doubled in size each day.

“That’s sort of like having a new fire every day,” Enty said.

The blaze had spread over 315 square miles (816 square kilometers), an area larger than New York City. Firefighters for the third day in a row had to back off occasionally for their safety and “weather isn’t going to change for the foreseeable future,” said Rob Allen, an incident commander.

Crews were facing above-normal temperatures and bone-dry humidity coupled with afternoon gusts that were expected to create dangerous fire conditions through Wednesday, officials said. Members of the Oregon National Guard were expected to be deployed to help with road closures and traffic control in fire-affected areas.

The fire disrupted three transmission lines that provide electricity to California and the state’s power grid operator asked for voluntary power conservation Monday. The California Independent System Operator said Tuesday that the grid was stable and with the forecast for cooler temperatures another call for conservation was not expected.

The fire in the Fremont-Winema National Forest was burning through a region where the Klamath Tribes — comprised of three distinct indigenous peoples — have lived for millennia.

“There is definitely extensive damage to the forest where we have our treaty rights,” said Don Gentry, the chairman of the Klamath Tribal Council in Chiloquin, Oregon, which is located about 25 miles (40 kilometers) west of the Bootleg Fire.

“I am sure we have lost a number of deer to the fire,” he said. “We are definitely concerned. I know there are cultural resource areas and sensitive areas that are likely the fire is going through.” 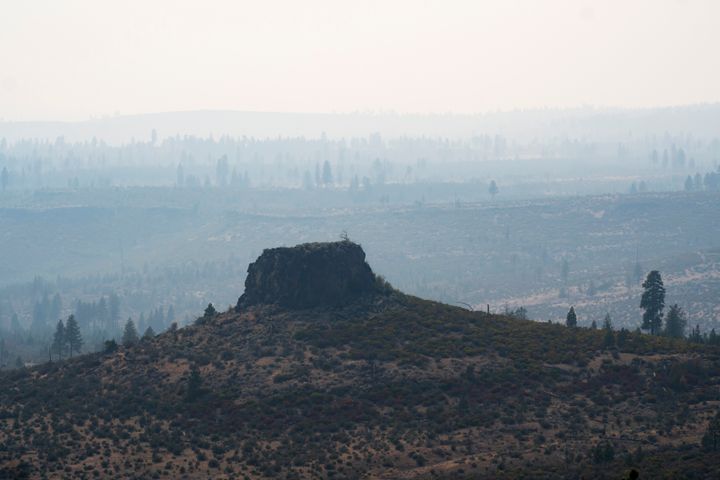 The Klamath Tribes have been impacted by wildfires before, including one that burned 23 square miles (60 square kilometers) in southern Oregon last September. That fire damaged land where many of the Klamath tribal members hunt, fish and gather. The fire also burned the tribes’ cemetery and at least one tribal member’s house, Oregon Public Broadcasting reported in September.

The tribes are struggling with drought-caused problems. In past decades, they have fought to preserve minimum water levels in Upper Klamath Lake to preserve two species of federally endangered sucker fish that are central to their culture and heritage. Farmers draw much of their irrigation water from the same lake that’s critical to the fish. Even before the fire erupted, extreme drought in southern Oregon had reduced water flows to historic lows.

In California, progress was reported on the state’s largest fire so far this year. The Beckwourth Complex, a combined pair of lighting-ignited blazes, was almost 50% contained after blackening more than 145 square miles (375 square kilometers) near the Nevada state line.

Damage was still being tallied in the small rural community of Doyle, California, where flames swept in during the weekend and destroyed several homes, including Beverly Houdyshell’s.

The 79-year-old said Tuesday that she’s too old and too poor to rebuild and isn’t sure what her future holds.

“What chance do I have to build another house, to have another home?” Houdyshell said. “No chance at all.”

A fire that began Sunday in the Sierra Nevada south of Yosemite National Park grew to nearly 15 square miles (39 square kilometers) but containment increased to 15%. Four unspecified buildings were destroyed.

Scientists say climate change has made the West much warmer and drier, and they warn that weather will get wilder as the world warms. They say extreme conditions are often from a combination of unusually random, short-term and natural weather patterns heightened by long-term, human-caused climate change. However, special studies are needed to determine how much global warming is to blame, if at all, for a single extreme weather event.

Cline reported from Salem, Oregon. She is a corps member for the Associated Press/Report for America Statehouse News Initiative. Report for America is a nonprofit national service program that places journalists in local newsrooms to report on undercovered issues. Associated Press journalists Chris Grygiel in Seattle; Paul Davenport in Phoenix; Julie Walker in New York; Haven Daley in Doyle, California; and Christopher Weber and John Antczak in Los Angeles contributed to this report.