Welcome to Cannes’ RED HOT carpet CLUB! Scarlet dresses, slits to the thigh… Nicole Kidman kicked it off, but as the A-list flash ever more flesh, is it a risque cliche too far?

There is something about the Cannes film festival that sets it apart from other star-studded events. The Baftas and the Oscars are all very well — but they take place in freezing February and March.

Cannes, by virtue of timing and location, is a far balmier affair — which might go some way to explaining why, sartorially, it tends to be more relaxed.

And why not, when there’s a superyacht in the harbour and the beach bar at the Eden Roc is open all hours? Indeed, some of the looks can seem like little more than glorified bikinis. 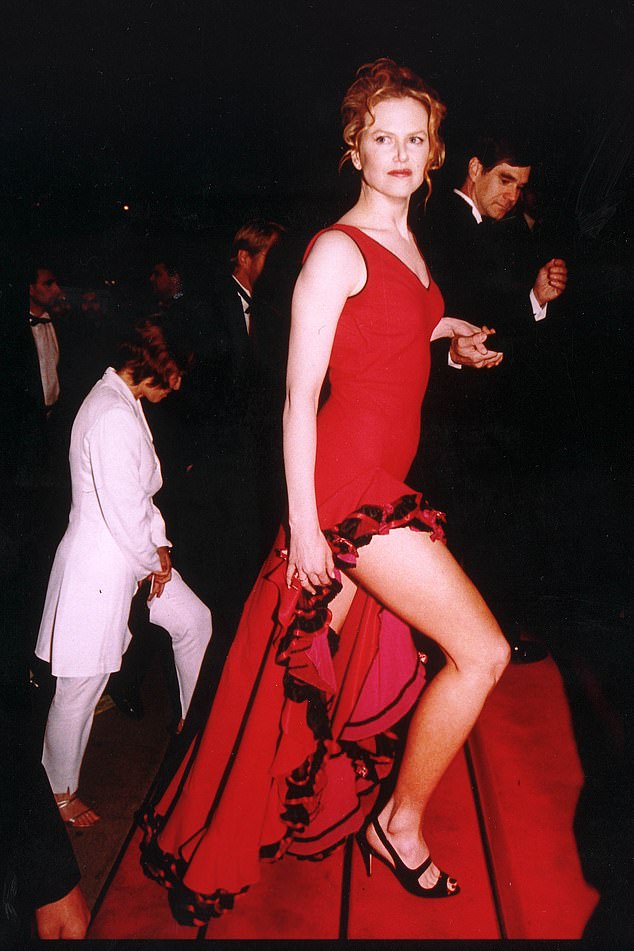 Flash of inspiration: Nicole sets the style in what is believed to be Galliano

Last year’s festival was notable for Amber Heard’s frontless floral gown and Kendall Jenner’s incessant boobage. This year’s stand-out trend seems to be lace and flowers, with actress Elle Fanning looking adorable in what, at first sight, might have been mistaken for her great aunt’s bloomers but which, it later transpired, was Valentino couture.

But there is one daring Cannes favourite that never goes out of fashion: red.

The colour of danger, passion and revolution, a shade that communicates courage and a sense of adventure, that captivates and inspires, that above all stands out.

Uncompromising, unmissable, unequivocal, wearing crimson on the red carpet at Cannes is thrilling, sexy, subversive — and a sure-fire way of getting noticed.

As a film festival, Cannes has always belonged to scene-stealing starlets. After all, it was where Brigitte Bardot first swept to fame, captivating photographers on the beach in an off-the-shoulder red top. 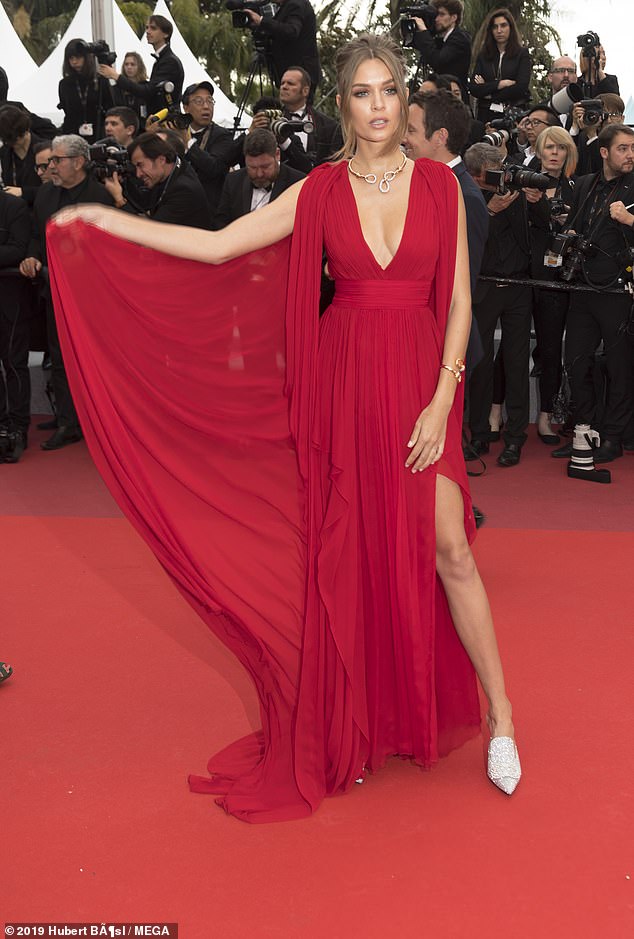 Over half a century later, the Bardot top still survives, a flirtatious fashion favourite. But while the colour remains constant, the dresses are increasingly of the blink-and- you-miss-them variety.

Now, only she who braves a scarlet gown slit to the skies can be sure she’s got the world watching.

It was none other than Nicole Kidman, on the cusp of global superstardom more than 20 years ago, who took the Cannes red carpet to coquettish new heights when she dared to bare in a flamenco-inspired flame-red number, slashed to the thigh.

The year was 1995 and the festival was dominated by worthy ‘films d’auteur’ — in competition were Bernardo Bertolucci, Lars Von Trier, the Coen Brothers and Mike Leigh. Although relatively modest by today’s standards, Kidman’s flamboyant look was a stand-out slice of diva inspiration, a cheap but effective thrill in a sea of seriousness.

Since then everyone from Sharon Stone to Ines de La Fressange — via Kate Moss, Rosie Huntington-Whiteley, Salma Hayek, Rita Ora and many more — have realised that cut-away crimson is the quickest and most effective way of stealing the show. Indeed, the scarlet women of Cannes have made quite a reputation for themselves over the past 20-odd years.

Perhaps the most memorable in recent years was Bella Hadid, whose 2016 sideless satin number misbehaved terribly on the red carpet, leaving nothing to the imagination.

Still, while it might not have provided much in terms of physical coverage, it certainly achieved the desired effect publicity-wise, putting its wearer on the world’s front pages.

Slashed to the waist, split to the thigh, daring reveal-all cuts and shapes, barely-there chiffons and plunging necklines — sometimes these dresses seem held together by little more than a few bits of tit-tape and thread, as insubstantial and transient as mayflies.

But in Cannes — with that beautiful South of France light, the scent of warm pines in the air — it takes on an air of languid sophistication. Like a good pina colada, when it works, it really works.

There are, of course, exceptions. Witness this year’s frankly irredeemable, fake Versace safety-pin dress in pillar-box red, as worn by Praya Lundberg at the Rocketman screening. And Alessandra Ambrosio’s scarlet chiffon number proved too much of a challenge even for her, as unforgiving as it was impractical.

Still, it got our attention, didn’t it? And that, at the end of the day, is all that matters.

There Are 11 New Original Movies Coming in June, Because Netflix Is Too Good to Us