Watch Daily Pop's Carissa Culiner Find Out the Sex of Baby No. 2 Live on Air! 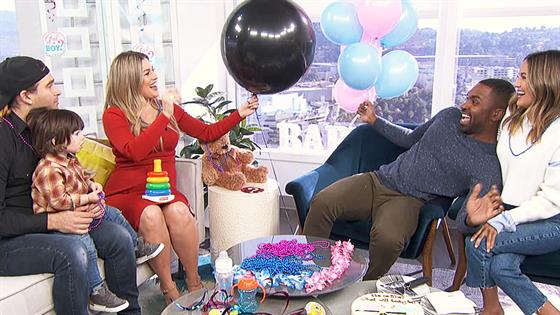 Pregnant Daily Pop host Carissa Culiner got some major news during Monday morning’s broadcast. The E! star had her family on hand as the sex of her baby-to-be was revealed live on air.?

“Today is a huge day for my family,” the 33-year-old said sitting alongside husband Shanon and their son Chase. “We’re about to find out if we’re going to have a boy or a girl live on the show. We have no idea what it is. We’ve been waiting very patiently and we also have my parents in studio, my brother on FaceTime, his brother on FaceTime and his dad is watching in Miami. So we’re very excited to find out.”

Carissa guessed it’s going to be a boy and her Daily Pop co-hosts Justin Sylvester and Erin Lim agreed. Meanwhile, in an effort to shake things up, Shanon guessed it’s a girl. Moments later, Carissa popped a giant balloon to reveal a cloud of pink confetti: it’s a girl!

“I am so happy!” Carissa gushed in excitement. “I wanted a girl, I just thought it was going to be a boy.” Watch the sweet reveal and Carissa’s reaction in the clip above!

Carissa previously announced she is pregnant with baby No. 2 during the Oct. 22 episode of Daily Pop.

“A certain someone at this table has been keeping a huge secret and I’m going to expose it right now,” Carissa shared before playing a clip of Chase finding out he’s going to have a sibling.

“I’m so excited,” she added. “We wanted another baby and we were very excited about it. I’m 13 weeks now so the baby will be due in April.”