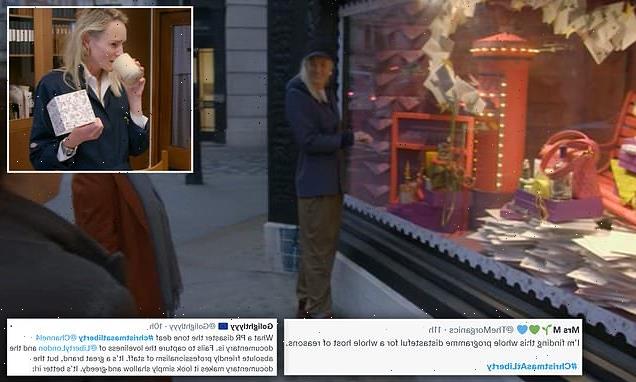 Viewers of Christmas at Liberty slammed the programme as ‘a PR disaster’ as they criticised the ‘snobby team’ and ‘overpriced’ products.

The show, which aired on Channel 4 last night, followed the team at the luxury department store in London as they spent months preparing for the festive season and decorating the store.

Ahead of the Christmas launch, the visual merchandising team worked six night shifts in order to complete the stunning festive window display, complete with 13,000 paper envelopes.

However it wasn’t enough to impress Chief Marketing Officer Madeleine Macey, who demanded several changes were made to the window ahead of the launch and called parts of it ‘obscure.’

Many of those watching were left stunned by the way she spoke to staff, with one saying: ‘This Madeleine seems like a nightmare to work for – clearly they’re all scared of her! Why didn’t she work with the team on the windows? 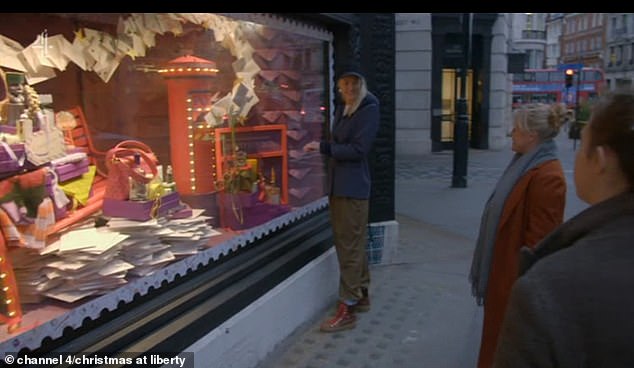 Viewers of Channel 4’s Christmas at Liberty slammed the programme as ‘a PR disaster’ as they criticised the ‘snobby team’ and ‘overpriced’ products (pictured, Chief Marketing Officer Madeleine Macey studying the window display and providing her feedback)

‘No sense of lead-by example. Kudos to the team who’ve worked their backsides off, the displays and decor are awesome.’

Meanwhile another commented: ‘What a PR disaster the tone deaf documentary is. Fails to capture the loveliness of Liberty London and the absolute friendly professionalism of staff.

‘It’s a great brand, but the documentary makes it look simply shallow and greedy.’

CEO Adil Mehboob-Khan explained the festive season was more important than ever in 2021, saying: ‘Last year, just as we were about to go into Christmas, we were hit by the second lockdown. 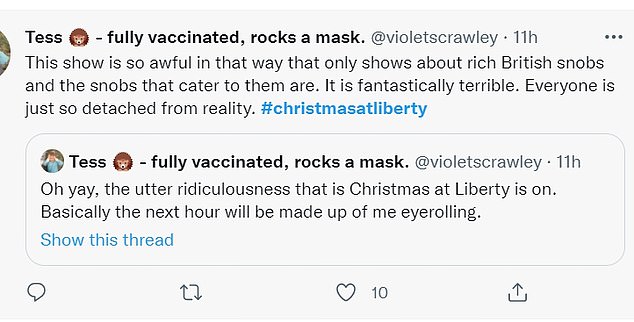 ‘Cash has been very tight,  and now I want us to be very bold. That’s the challenge for us.

‘Christmas is a fundamental for retailers, it’s 50 per cent of us in the last three months.’

Meanwhile Madeleine explained: ‘The pressure is on for everything to be delivered absolutely perfectly.

‘The competition out there is fierce, everybody needs a good Christmas. it’s tough, it’s hard work.’ 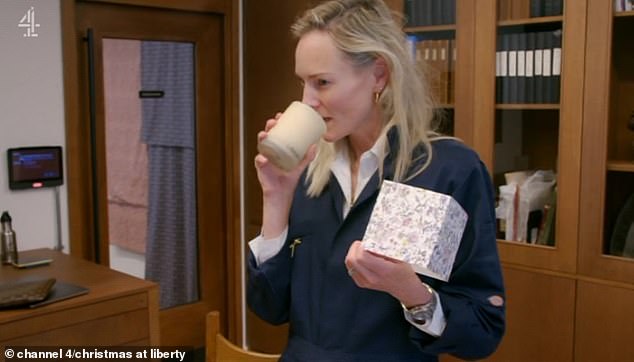 Among the products highlighted was a red cabbage plate and a £48 candle, which Madeleine said was ‘affordable’ for everyone

Central to the plan for bringing the magic back to Christmas was the Visual Content Manager Lisa, who said: ‘If we don’t get it right, it makes people feel like they can’t relate so I do obsess about Christmas quite regularly.’

She pitched a mocked up vision of her Christmas window displays to Madeleine and Abil, explaining: ‘The idea is, there is a need for people to be sending their love.

And while Abil appeared impressed by the idea, Lisa’s concept needed the sign off from Madeleine, who interrupted her during the meeting.

She asked: ‘Is there going to be a theme? How true to life is this [paper envelope] sample? It looks a little bit beaten up. 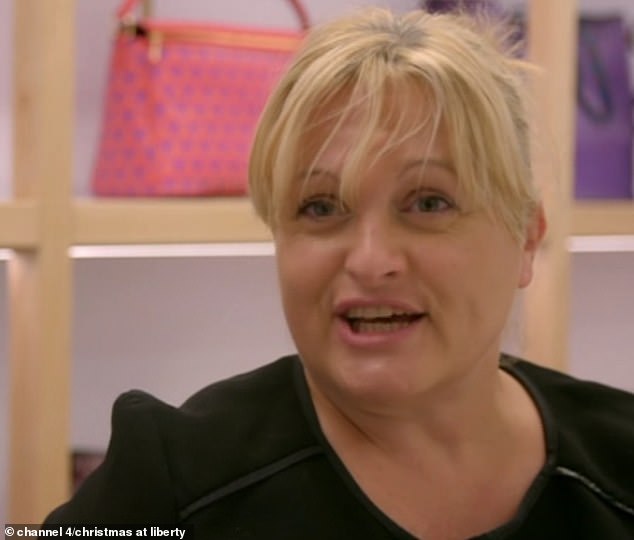 After pitching her idea for an ‘outpouring of love’ through postal services as a theme for the window display, Lisa confessed she felt ‘a lot of pressure’

‘I’m concerned that if these are the envelopes we’re using, they’re going to get battered very quickly.

‘You’re going to be walking in and out of these tiny windows and they’re going to get damaged.’

After the meeting, Lisa confessed she felt deflated, saying: ‘There is a lot of pressure when people react that way.’

Meanwhile the programme also highlighted ‘unique, must have products’ on sale at the store, with Madeleine explaining: ‘Liberty’s has always been the place where there is an important tension between the traditional and avante garde.

‘So when it comes to a time as traditional as Christmas, how can we be edgy and aspirational and not just the expected?’ 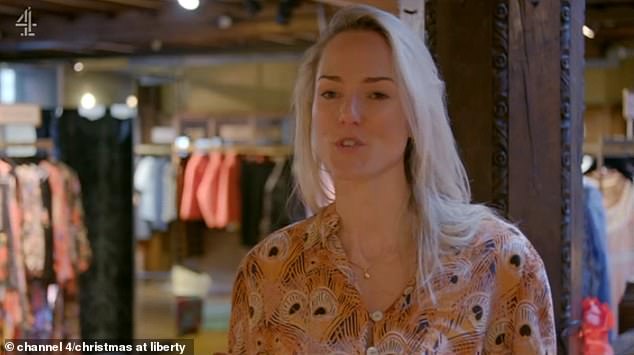 Among the products highlighted was a red cabbage plate and a £48 candle, which Madeleine said was ‘affordable’ for everyone.

With Christmas quickly approaching, the visual merchandising team took on six night shifts to get the elaborate window displays built.

Thousands of envelopes were frantically stuck into place by hand, with team member Hannah saying: ‘When getting the build here, some of the envelopes did get crushed, and because it’s something we know Madeleine will be noticing so we’re replacing any crushed envelopes or anything that is not perfect.’

As the week came to an end, jobs were piling up in the store, with Hannah explaining: ‘I’ve had two hours sleep. 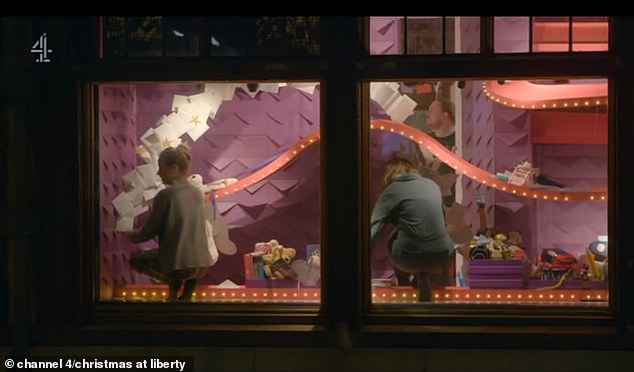 As the team approached 5am, they added any final detail to ensure the window was absolutely perfect ahead of an inspection from Madeleine .

Lisa explained that after six night shifts, the team were ‘hitting a wall.’ 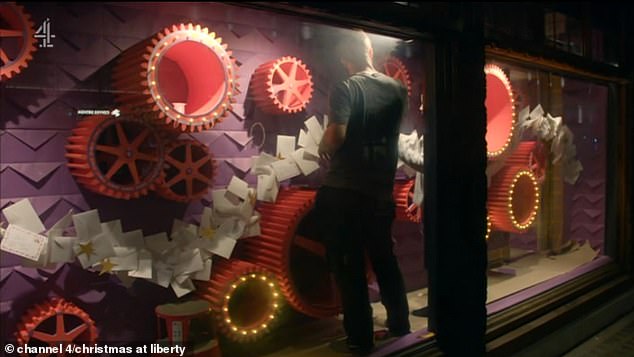 Arriving at the store at 7am to inspect the festive window, Madeleine said: ‘I am genuinely nervous about this theme, I think maybe we needed something more traditional Christmas and fuzzy after this year.’

And studying the window, she asked the team: ‘How easy is it to get back into these windows?’

She began listing changes that should be made to the window, including ‘turning a cracker’ and ‘making sure pyjamas and scarves don’t read like fabric.’

She added: ‘What’s this funny little mark on the wheel here? This doesn’t read – it’s a little too obscure.’ 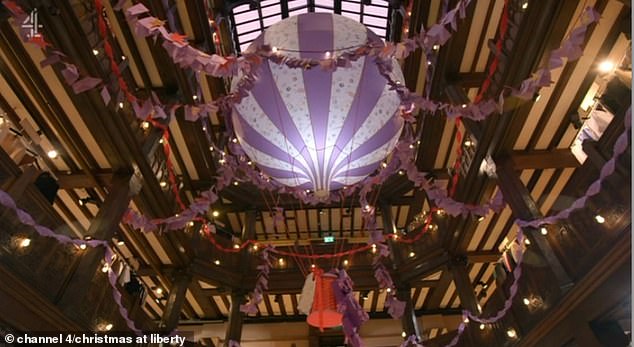 Despite the incredible Christmas decorations and effort from the team, Madeleine confessed she was ‘nervous’ about the theme because it wasn’t ‘traditionally Christmas and fuzzy’

After making her changes, she takes a moment to give her final thoughts, saying: ‘I think this is really amazing and it’s not warm and fuzzy Christmas it’s completely and utterly bonkers but that’s Liberty right?’

However many of those watching were left stunned by her feedback for the team, with one saying: ‘Christmas at Liberty is making me sick.

‘Complete bunch of pretentious snobs who are clearly not living in the real world. The people featured on this show are the absolute worst.’

Another wrote: ‘If I had worked tirelessly on a project and then someone like Madeleine came along and criticised it after her full nights sleep, I’d put her in the window display but from the outside, through the glass.’

The Queen has a mini John Lewis store made for her to ‘shop’ for Christmas presents for the royal family, butler reveals