The United States plans to deploy additional rotations of fighter and bomber aircraft in Australia to deter against potential Chinese military aggression and threats from North Korea.

A Pentagon review of the US’s military resources throughout the world has also called for an upgrade of its bases in Guam and Australia to counter Beijing’s military buildup in the Indo-Pacific region. 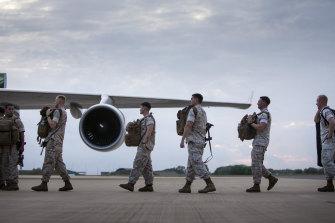 More US marines could be stationed in Australia.Credit:Royal Australian Navy

The review says the new rotations and upgrade of bases are needed to “deter potential Chinese military aggression and threats from North Korea”.

The Pentagon has been directed to enhance its “infrastructure in Guam and Australia” and to prioritise “military construction across the Pacific islands”.

“You’ll see ground forces training and increased logistics cooperation, and more broadly across the Indo-Pacific, you’ll see a range of infrastructure improvements, in Guam, the Commonwealth of the Northern Mariana Islands and Australia.”

The additional rotations of aircraft in Australia, first flagged when Defence Minister Peter Dutton and Foreign Minister Marise Payne travelled to Washington in September, is confirmation the US is going ahead with the plan as a key pillar in its more forceful defence posture to deter against a rising China.

The unclassified version of the global posture review, which hasn’t previously been released, calls for improvements to airfields in Australia to cater for the rotational deployments of aircraft. These could include B2 stealth bombers, as well as F-22 and F-35 fighters.

The improvements to airfields, which will begin being rolled out next year, will expand the ability of the US to ferry troops in and out of Australia for deployments in a potential conflict. Officials declined to expand on the specifics because many details were classified.

The review also directs the US to reduce the number of troops and equipment in other parts of the world to focus more on the Indo-Pacific region “to enable improved warfighting readiness and increased activities” in the Indo-Pacific, according to one official.

Professor of international security and intelligence studies at the Australian National University, John Blaxland, said the move to have more American aircraft on Australian soil was welcome, but Australia needed to also upgrade its own military.

“There are those who are going to say this is a bad move. There are those out there who are saying you are beating drums of war,” he said. “But there are those, and I am one of them, who say that these are the things you need to do if you want to deter.”

“It’s a touchstone for Australia’s ability to actually assert its own foreign and defence policy for its own interests.”

Professor Blaxland said there were a “range of scenarios” where Australia may have to defend itself without the help of the US, yet the ADF was still a “boutique” defence force designed to operate in conjunction with its ally.

“We have to consider plausible scenarios where it may not be feasible [for the US to defend Australia], and in which case we will have to defend for ourselves,” he said.

From Eye Creams to Retinol Serums, These Are the Best Anti-Aging Skincare Deals for Cyber Monda