U.S. to shatter record for billion-dollar climate disasters in 2020

From social justice protests to politics to the pandemic, 2020 has been unprecedented in any number of ways. And although it didn’t always receive top billing, the climate crisis and the extreme weather that comes along with it also escalated to levels not experienced before. The U.S. experienced major disasters like the western wildfires, a record-breaking hurricane season and the mid-summer Midwest derecho that caused extensive damage.

So far this year, NOAA’s National Center for Environmental Information (NCEI) says the U.S. has been bombarded by 16 different weather and climate-related disasters with a financial toll of one billion dollars or more — tied for the most with 2011 and 2017. However, the events included in this year’s count have only been tabulated through the end of September and are expected to blow past that number once the final result is released in early January.

In a webinar organized by Climate Central on Thursday, Adam Smith, the head of NCEI’s Billion Dollar Weather and Climate effort, said he expects “we will shatter the previous record,” far outpacing the yearly average of 6.6 such events and potentially reaching a total of 20 individual disasters each which cost a billion dollars or more.

This is the sixth consecutive year in which the U.S. has experienced 10 or more billion-dollar weather and climate-related disasters. 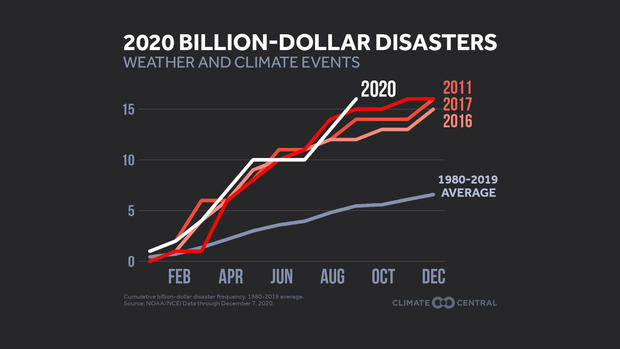 Steve Bowen is a meteorologist and head of catastrophe insight for Aon PLC, a professional services firm focused on risk. He says these losses are escalating due to two main factors: more intense or “unusual” events, and more people and “stuff” in harm’s way.

The more intense and usual events are powered by excess heat energy being trapped in the ecosystem by greenhouse gases from the burning of fossil fuels. But Bowen says the location of where people are moving has really amplified disaster costs as well.

“Some of the fastest-growing areas of the country include parts of the Southeast, Plains, Rockies, and the West that have been historically prone to high-impact events like hurricanes, severe convective storms, flooding, and wildfires,” said Bowen. “If you add more people into regions that are the most vulnerable to direct impacts from climate change-influenced events, you’re setting the stage for more risk and subsequent human and physical costs.”

The most notable such events this year were the wildfires in the West, the multitude of hurricane landfalls along the Gulf Coast, and the extremely strong derecho in the Midwest. All of these were beyond modern precedent and all were in areas where population is expanding and assets are becoming more valuable. 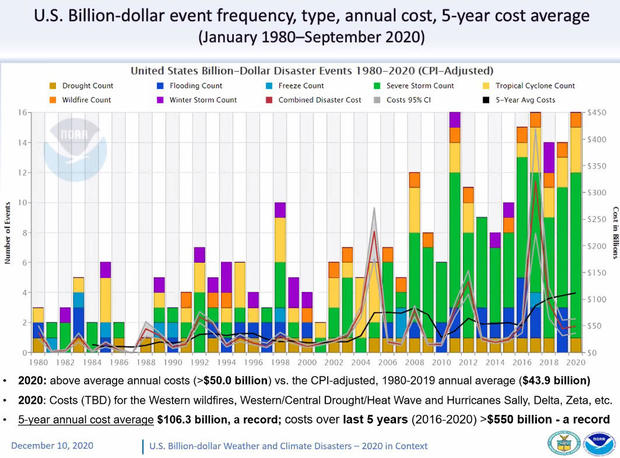 Professor Stephen M. Strader, a severe storms meteorologist and expert on hazards and disaster at Villanova University, agrees with Bowen and says it is difficult to separate the climate hazard event and the societal exposure and vulnerability aspects of disasters. Therefore, we can’t say what proportion of the increase in damage is due to climate change and what proportion is due to greater exposure, but he says  each play a vital role and are also rapidly changing.

“Ignoring the effects of a changing climate, our expanding developed footprint alone is driving an uptick in hazard impact magnitude, frequency, and disaster losses,” explains Strader. This expanding footprint of developed areas is something he calls the expanding bullseye — an illustration of how our population is moving into areas where greater hazards exist.

According NOAA and Climate Central, the greatest damage in 2020 came from the most severe fire season on record, which doubled the typical amount of acres burned. The vast majority of wildfires happened in the western states, where California endured 5 of its 6 largest fires on record and Colorado had 3 of its 4 largest wildfires on record. Scientists blame the longer and more intense fire seasons on warming and drying due to climate change.

The American Red Cross says wildfires and hurricanes contributed to a record need for emergency shelter this year.

The Atlantic hurricane season was the busiest on record with 30 named storms. Of those, a record 12 systems made landfall in the U.S. The Gulf Coast was hit by 9, shattering the previous record. While these landfalls significantly contributed to the damage totals, none of the strongest hurricanes hit a densely populated U.S. city like Houston, Tampa or Miami.

In years past the greatest economic cost came from major hurricanes like Harvey, which impacted densely-populated Houston, costing an estimated $125 billion. That is why 2017, about $450 billion in damage, stands out as one of the years with the greatest damage.

This year the total figure will be more modest. So far, the total up through September is estimated at $46.6 billion. Smith expects the total number may reach $100 billion and enter the top 5 costliest years, though still far less than the $450 billion cost in 2017 — and an illustration of just how significant a factor intense events hitting population centers are. Smith notes that these damage assessments do not include the human cost, either the loss of life or the impact to health.

For a meteorologist, perhaps the most memorable event of the year was the August derecho — a storm Smith described as an inland hurricane — which plowed a path 800 miles long and 40 miles wide through Iowa and Illinois. A broad area experienced hurricane-force winds, sometimes lasting 50 minutes, with gusts reaching 140 mph.

So far the damage from the derecho is estimated at $7.5 billion, but Smith expects that total to climb as more data is tallied. While this event was not caused by climate change, there is some evidence it was made stronger by it. 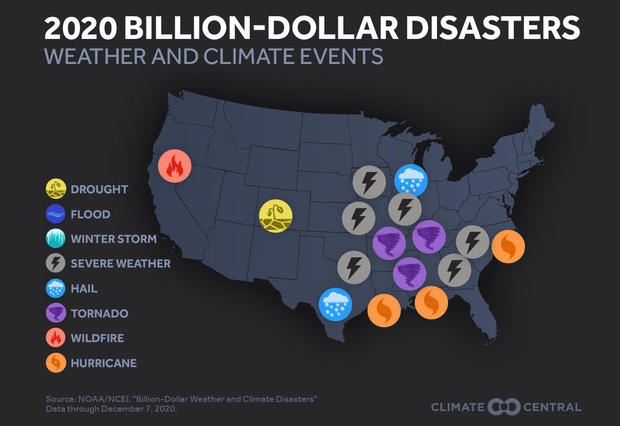 2020 makes clear just how vulnerable humans have become to the growing ferocity of natural disasters, which will only continue to escalate in a warming world.

“Much of the news about 2020 disasters and the associated records will likely be overshadowed by the pandemic, politics, societal issues, etc.,” said Strader. “But lurking in the background is the greatest existential threat facing humankind, climate change. One just has to look at the number of disasters and losses we’ve witnessed this year. We shouldn’t lose sight of this.”

MVP Level Up: How to Take Your Pushup to the Next Level