BRITS who are travelling home for Christmas face paying up to three times the price for train tickets and car hire over the festive season.

It comes after the government finally confirmed up to three households can mix in a new bubble for five days. 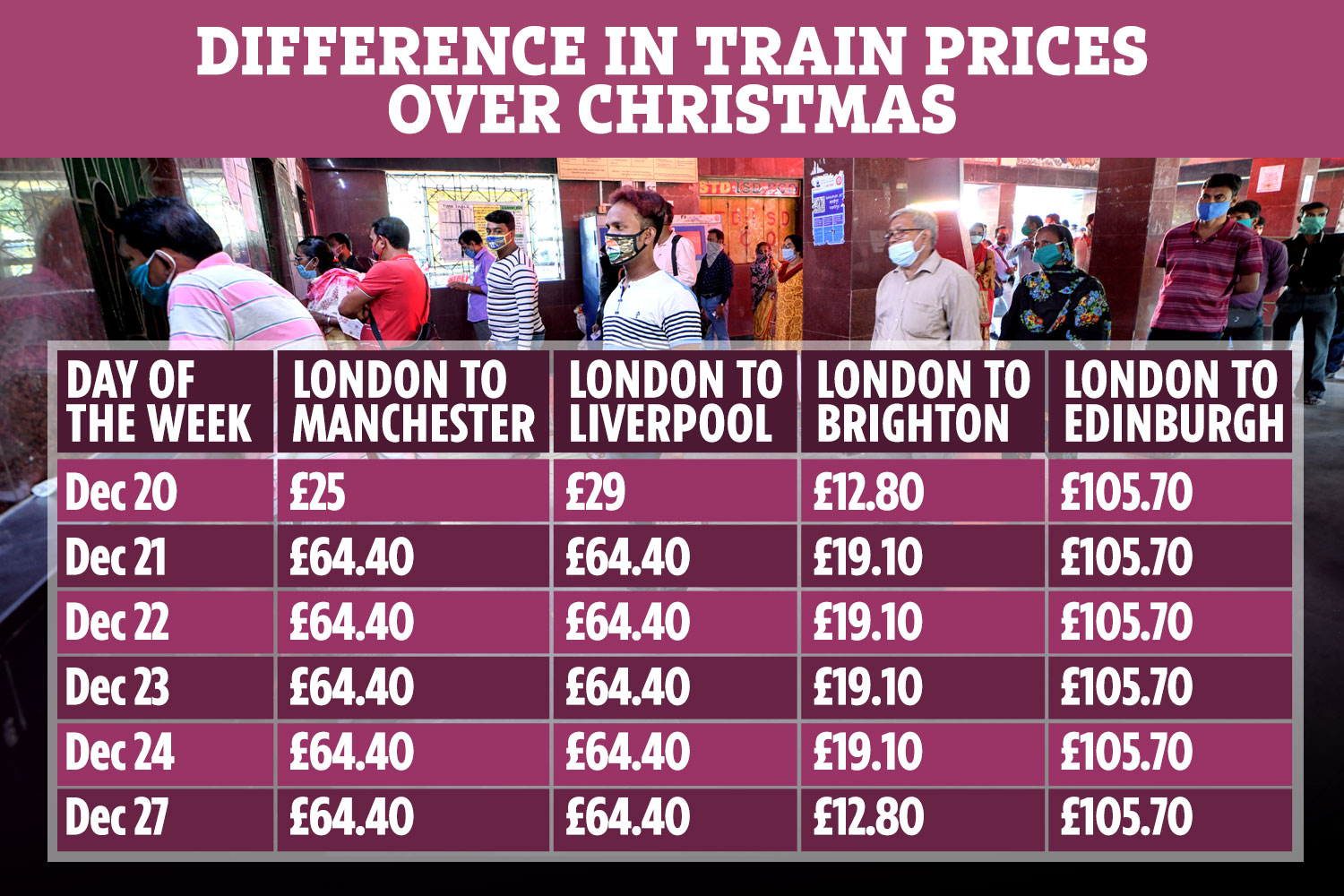 Social distancing and travel rules will be scrapped between 23 December and 27 December.

But travellers are already being warned of a Christmas “triple whammy” of having to pre-book tickets, limited trains and battling railway engineering works to see family.

The Sun found cheap fares for some train journeys have already sold out, leaving Brits paying double the price.

For example, a journey from London Euston to Manchester Piccadilly cost just £25 for the cheapest fare on December 20. 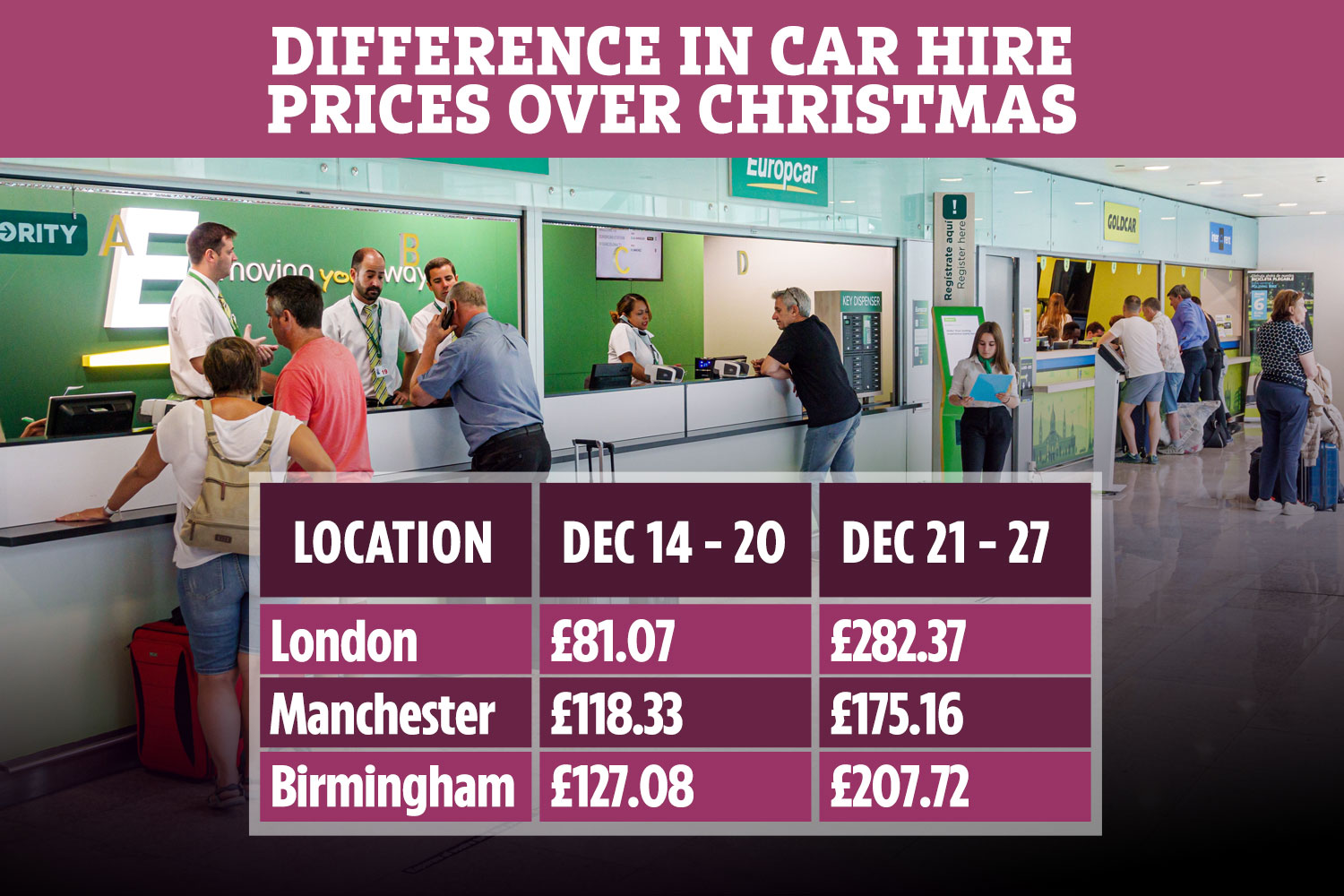 Travellers going from London Euston to Liverpool Lime Street would pay £29 on December 20, but this is now £64.40 between December 21 and December 27.

London Victoria to Brighton travellers face a 50% increase in price. The cheapest ticket on December 20 is £12.80 but the same fare is now £19.10 between December 21 to December 24.

How to save money on train tickets

HERE are some top tips to help you save cash on rail fares.

If you're taking a lengthy train journey then you could save hundreds of pounds by splitting your tickets.

You won't need to change trains and National Rail lets you split your ticket as long as the train calls at the station you buy the tickets for.

One site that works this out for you is Splitticketing.co.uk.

Regular travellers should be able to save by purchasing either a seven day, monthly or annual season ticket, which will allow them to make the journey an unlimited number of times as long as it's valid.

If you're making the same journey on three or more days a week, then a seven-day season ticket is likely to save you money, compared to buying a new one every day.

If you often travel back and forth to London on the train but you don't go regularly enough to buy season ticket, you might save with a Carnet ticket.

This gives you ten single journeys to or from London for the price of nine.

Tickets are valid for three months and you can buy books of peak (anytime) or off-peak tickets.

Book at least 12 weeks in advance

Network Rail releases its timetable 12 weeks in advance, so ticket firms usually make their fares available at this time.

Just like plane tickets, the earlier you book the lower the price you'll pay for your seat.

You can sign up to the Trainline's ticket alert service and it will tell you when cheap advance tickets go on sale for a particular journey.

Save money with a Railcard

If you're a regular traveller then a railcard should shave a third off the price of your ticket.

Just make sure you'll make more in savings over a year than the price of the Railcard. See Railcard.co.uk for more information.

It's not uncommon for cheap fares to be snapped up early in the run-up to Christmas.

For car hire, meanwhile, some firms are charging triple the price compared to the week before Christmas.

We compared prices using Booking.com and found hiring a car in London cost £81.07 between December 14 and December 20.

For drivers in Manchester, we found the cheapest car hire was £118.33 the week before Christmas. This then increases to £175.16 starting December 21.

The Sun has contacted National Rail for comment and we'll update this story when we get a response.

Meanwhile, Transport Secretary Grant Shapps has warned people to "look very carefully at the transport route they take” when people cross the country.

He added: "We have got to understand there are limitations to the (train) network caused by, for example, things like the need on some trains to pre-book tickets at this time, in order to prevent overcrowding.

"So we are going to be appealing to people to look very carefully at the transport route they take and of course even making a choice about whether they travel at all.

"It is the reality of the situation we're in, we will try to do everything we can with the network to make it as good as possible, but I think it is worth people being aware that busy times of travel is a problem.”

He also warned there would still be significant disruption on the network from planned engineering works.

Brits are also being warned that a Christmas tree shortage could hit the UK this year.

Last order dates for Christmas 2020 – how to make sure your presents arrive in time for December 25.

Tayshia Adams Tells Off Her Men on The Bachelorette: Grow Up, Fellas!
Entertainment