The NSW Coalition’s shaky hold on government was exposed on Thursday when the Greens managed to change the state’s constitution to allow Parliament to meet virtually during a crisis such as the pandemic.

It is the first non-government bill opposed by the government to pass the NSW Parliament since the Coalition swept to power in 2011– a clear sign the Perrottet government has lost its majority and will struggle with its legislative agenda. 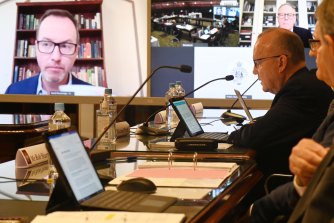 The change to the constitution, which sees NSW become the first parliament in Australia to be able to meet fully virtually during emergencies such bushfires or the pandemic, was opposed by the government.

Greens MP David Shoebridge said the bill passed with the support of Labor, independents and Shooters, Fishers and Farmers MPs despite “fierce opposition from the Coalition at all stages”.

“Today we had a case of democracy working and proof positive that the Coalition is in minority government in NSW,” Mr Shoebridge, who leaves state politics on Thursday to contest the Senate in the federal election, said.

“Today we amended the constitution so that next time we have a crisis, democracy doesn’t die, and we did it in the face of staunch opposition from the government.”

In a bid to avoid a humiliating loss on the floor of the lower house, the government did not call a division when the bill was voted on.

However, Balmain Greens MP Jamie Parker said it was a major defeat for the government.

“The government’s majority has continued to reduce over the last few months as the crossbench has expanded, and today we reached the tipping point where the government lost control of numbers in the house,” he said.

The Coalition is in minority in the lower house, needing 47 MPs to govern outright, but has only 45 and relies on the support of the crossbench. It also does not control the upper house. 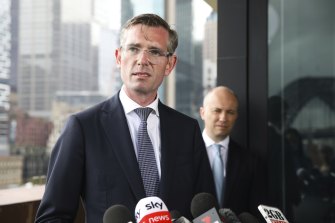 Premier Dominic Perrottet’s government appears to be struggling with its legislative agenda.Credit:Renee Nowytarger

The government last week lost one of its key supporters when Liberal-turned-independent MP Gareth Ward was suspended from Parliament after he was charged with five offences, including sexual assault.

Several government MPs spoke against the bill to allow virtual parliament, including Castle Hill MP Ray Williams, who said it would be hypocritical to expect other workers to return to the CBD if MPs did not.

“We want a lot of people to go back to the city to shop, to dine, to participate in all the businesses that are across this wonderful city [but] we want legislators … to sit at home, comfortably, with a rug around our knees, having a little hot toddy and a cup of tea in front of our computer.”

Mr Williams said there were a “number of existing oversight mechanisms” that continued to operate during the pandemic, including committees.

The Parliament was suspended for several months during the Delta lockdown last year.

Prince Harry and Meghan Markle Might Attend a Star-Studded Celeb Wedding in Florida!