Almost famous! TikTok users proudly reveal their VERY minor roles in big name films and TV shows- including a bus passenger in Killing Eve and an unnamed soldier in Dunkirk

A role in a major film or TV show is the dream for aspiring actors everywhere.

But these hilarious TikTok posts prove the reality is not always as glamorous as it first appears.

Social media users from the US and UK have been poking fun at themselves by sharing the minor roles they’ve landed in big budget productions, including Killing Eve and the Transformers franchise.

The trend, known as the ‘small part in a famous movie check’, sees the actors posting a snap of themselves in the film or TV show – often in the background behind the main actors – alongside a clip of them today.

Highlights include a man cast as an extra in a star-studded scene in Dunkirk, alongside A-listers Harry Styles and Cillian Murphy, and a woman who appeared as a Hogwarts student in Fantastic Beasts: The Crimes of Grindelwald.

Here, FEMAIL reveals the best examples of extras who may not be Oscar winners, but have certainly earned their place in the TikTok hall of fame. 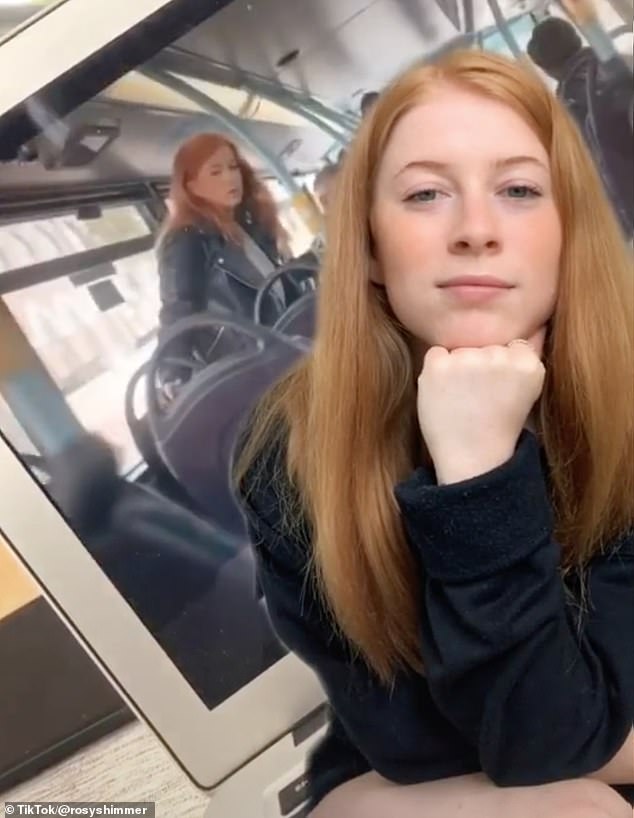 Rose Francis, from London, revealed on TikTok she plays a woman awkwardly sitting on the back of a bus during a dramatic fight scene in the third season of Killing Eve.  Pictured, Rose today (foreground), superimposed in front of her Killing Eve scene (behind) 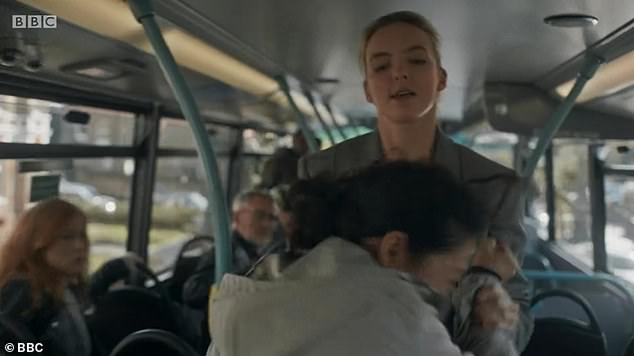 Killing Eve viewers were gripped as Villanelle (Jodie Comer) and Eve (Sandra Oh) came to blows on top of a London double-decker. Sitting to the left of the frame is Rose (seen) 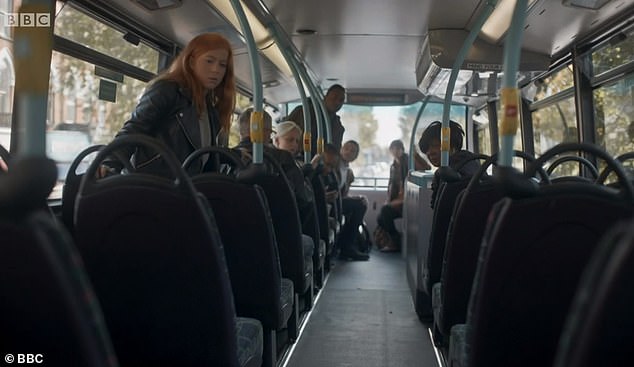 The clearest view of Rose (left, standing up) came when the bus passengers turned around to check on Eve (Sandra Oh) as she recovered on the floor after a headbutt from Villanelle

Killing Eve viewers were gripped as they watched Villanelle (Jodie Comer) and Eve (Sandra Oh) come to blows in a dramatic series 3 fight scene set on a London double-decker bus.

But in the background, sitting just feet away, was TikTok user Rose Francis, from London.

In a hilarious clip, Rose sits deadpan in front of a scene from the hit BBC show, in which she is scene standing up to check on Eve after the fight.

She is also featured briefly as Villanelle boards the bus and reacts in the background as the fight ensues. 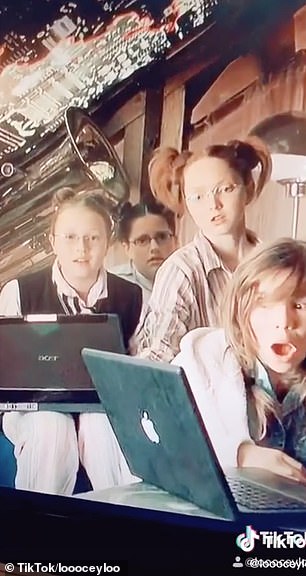 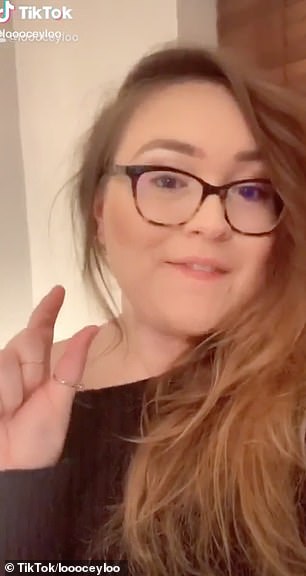 Lucy (right), from the UK, revealed on the social media platform she had a part in 2007 comedy St Trinian’s. Pictured left, Lucy (far left) with co-stars including model Lily Cole (centre)

Rupert Everett, Colin Firth and Gemma Arterton all starred in 2007 schoolgirl comedy St Trinian’s – and right alongside them was British TikTok user Lucy.

Lucy revealed on the social media platform that she played one of the schoolgirls, alongside model Lily Cole.

Lucy shared a still from a scene in which she and her fellow schoolgirls – including Cole – are hunched over their laptops.

To add to the fun Lucy improvised the famous St Trinian’s uniform and delighted followers by dancing around her bedroom. 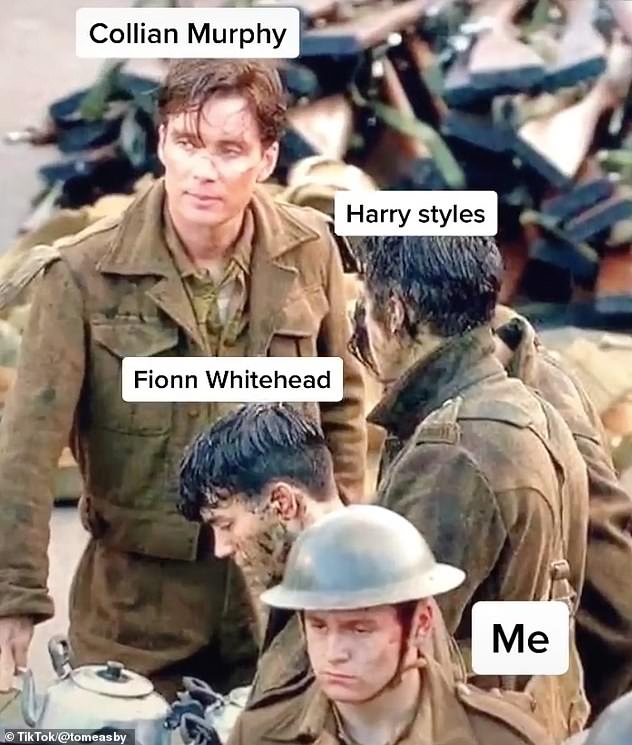 In one scene, extra Tom Easby (seen tagged as me) starred as a soldier alongside British stars Cillian Murphy, Harry Styles and Fionn Whitehead in 2017 war film Dunkirk 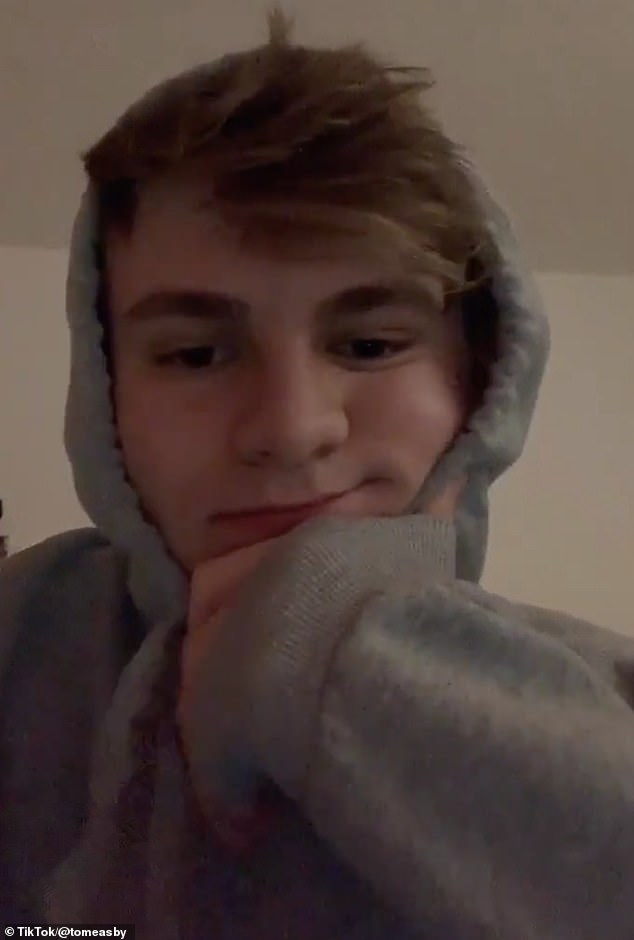 Tom Easby (pictured) , from the UK, revealed his small claim to fame came after a role in 2017 war film Dunkirk on TikTok

Tom Easby, from the UK, revealed his small claim to fame came after a role in 2017 war film Dunkirk.

In one scene, he starred as a soldier alongside British stars Cillian Murphy, Harry Styles and Fionn Whitehead.

The film written, directed, and produced by Christopher Nolan that depicts the evacuation of World War II and stars a huge cast including Tom Hardy and Kenneth Branagh.

In the scene shared by Tom on TikTok, he is seen dressed in military uniform waiting to be evacuated from the French beach. 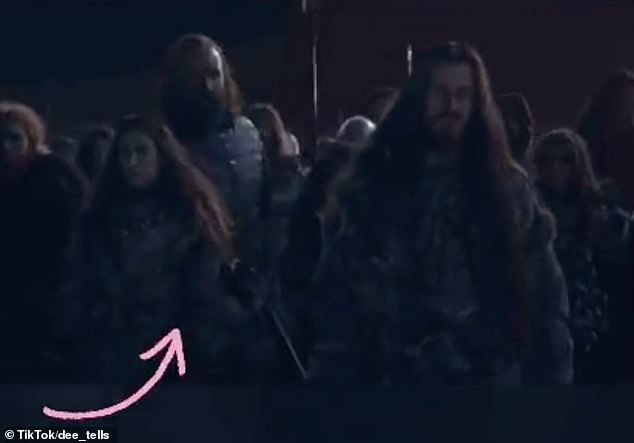 Dee , from Ireland, had a small part in HBO hit series Game of Thrones, which finished last year. She is scene marching alongside the Hound (Rory McCann) with a blood stained face 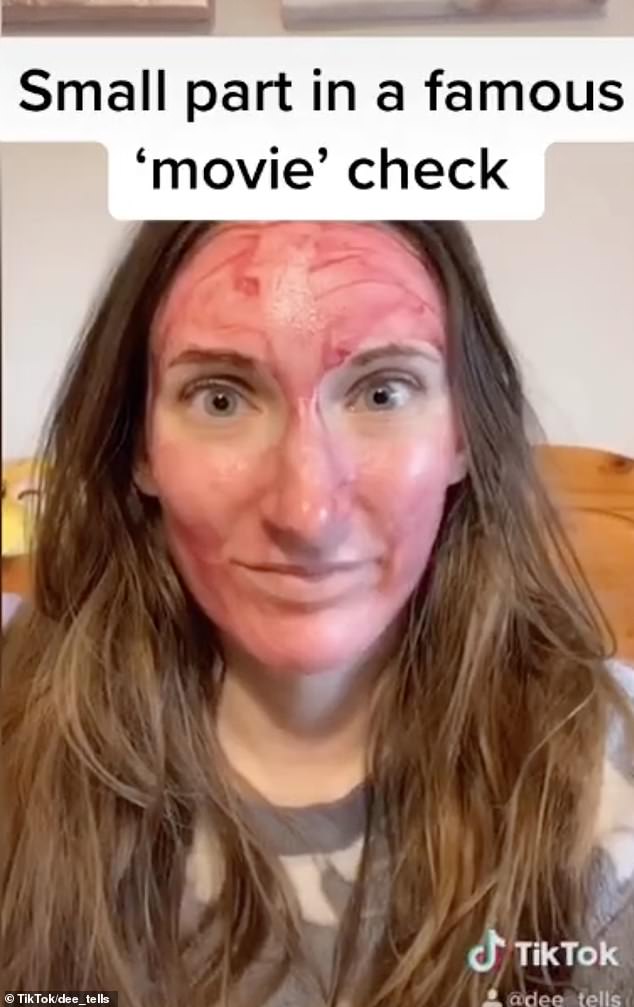 Dee (pictured) , from Ireland, poked fun at the scene by covering her face in a red liquid for the video

Dee, from Ireland, had a small part in HBO hit series Game of Thrones, which finished last year.

She was an extra in episode ‘The Long Night, the third episode of the eighth season, where Winterfell fights the Army of the Dead.

In her video, Dee is seen marching alongside the Hound (Rory McCann) with a blood stained face.

To poke fun at the scene, Dee recreated the ‘blood’ on her face for the TikTok video.

Fantastic Beasts: The Crimes of Grindelwald 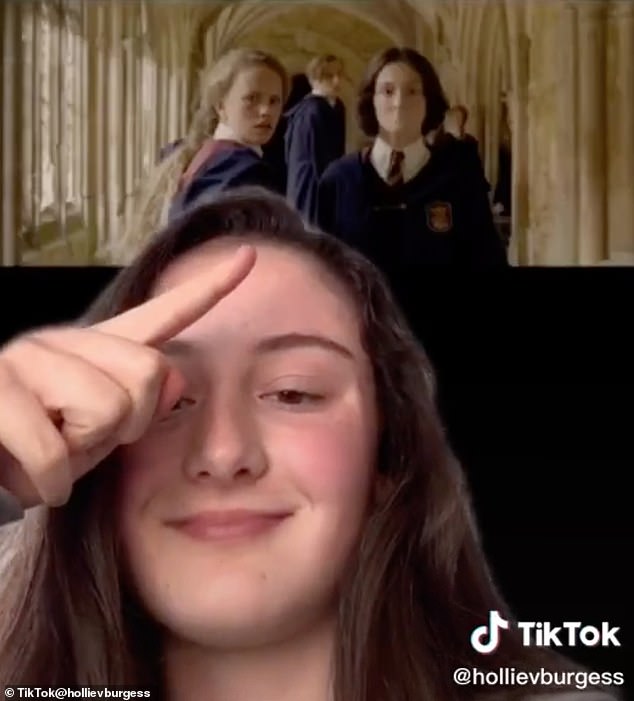 Hollie Burgess, from the UK, (seen bottom) stared in Harry Potter spin off Fantastic Beasts: The Crimes of Grindelwald as a student at Hogwarts (seen top)

Hollie Burgess, from the UK, stared in Harry Potter spin off Fantastic Beasts: The Crimes of Grindelwald as a student at Hogwarts.

In the film, she has her mouth clamped together by a young by Leta Lestrange using an Oscausi spell.

Character Minerva McGonagall reverses the spell, but when the girl begins to complain about Leta further, it’s the irritated McGonagall who then recasts the spell.

Harriet Montana, from the UK, seen left, starred in a minor role in the 2011 comedy adaptation of Channel 4 series The Inbetweeners. She can be seen in the one of the film’s party scenes in running along the strip in Crete (centre, right image) just ahead of main characters 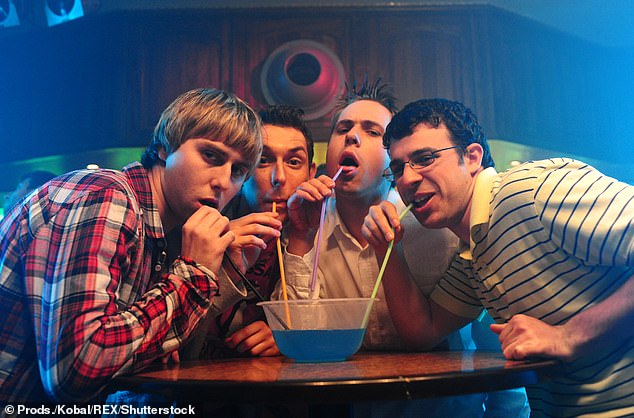 Pictured, James Buckley, Blake Harrison, Joe Thomas, Simon Bird in The Inbetweeners Movie in 2011. The main characters appeared just behind Hannah in the scene from the film

Harriet Montana, from the UK, starred in a minor role in the 2011 comedy adaptation of Channel 4 series The Inbetweeners.

She can be seen in the one of the film’s party scenes in running along the strip in Crete just ahead of main characters Will (Simon Bird) , Simon (Joe Thomas) , Neil (Blake Harrison) and Jay (James Buckley).

The extra teased she’s been unable to escape the fame of her minor role in her onle video.

Pictured, Sophie Bobble as ‘little girl’ in 2007 film Transformers meeting an Autobot before it takes the shape of a vehicle 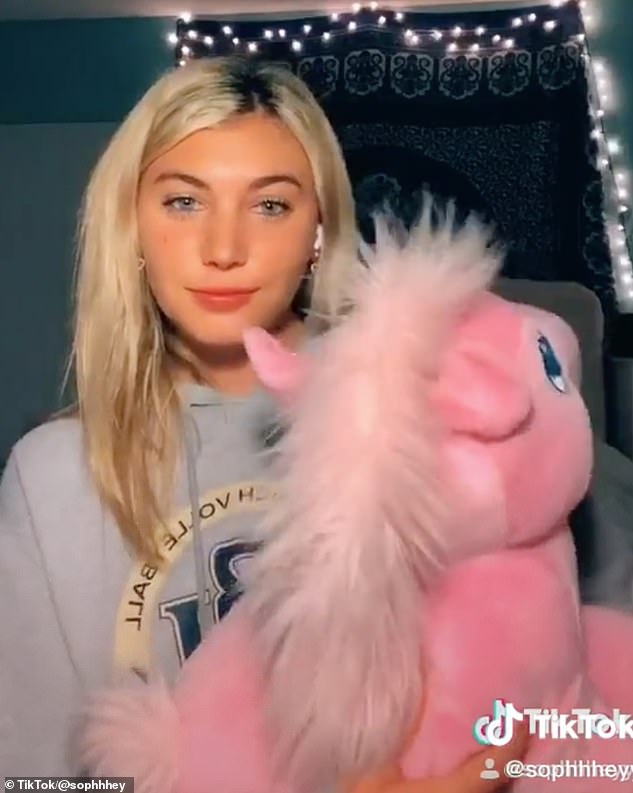 In the movie her minor character is awoken by the impact of something into her house’s pool, before witnessing a Autobot Transformer which she asks whether it’s the tooth-fairy.

For her video the budding actress posed with the same pink plush piny toy she famously clutched in the movie. 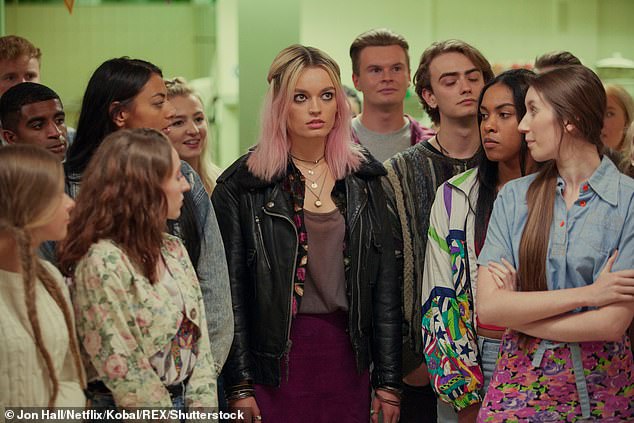 Sex Education is based on a teenage boy with a sex therapist mother teams up with a high school classmate to set up an underground sex therapy clinic at school. Pictured, Emma Mackey as Maeve Wiley

Florence Windsor, 20, from the UK, had a minor role in the fist two seasons of hit Netflix series Sex Education.

In her video, she’s seen in the video saying ‘f*** me’ when new student Rahim enters the school for the first time.

The series stars Asa Butterfield as an insecure teenager, Gillian Anderson as his mother, a therapist, and Emma Mackey as his crush Maeve Wiley.