The whirlwind that turned this TV star's life upside down

The whirlwind that turned this TV star’s life upside down: Just months ago news presenter Sarah-Jane Mee was happy to be single and childless – Now she’s pregnant and has found Mr Right, thanks to a little royal help

The past year has, to put it mildly, been a rollercoaster ride for Sky presenter Sarah-Jane Mee — proof that we truly never know what is around the corner.

For Sarah-Jane has gone from successful single girl to hopelessly in love mum-to-be in the space of just 14 months. Add on an engagement, a wedding and a house move to plan and you may get some idea of the seismic changes in her life.

And the extraordinary chain of events all kicked off within weeks of Sarah-Jane hitting her landmark 40th birthday.

‘It’s crazy isn’t it?’ Sarah-Jane, now 41, laughs. ‘I sometimes have to pinch myself because it’s happened so fast. 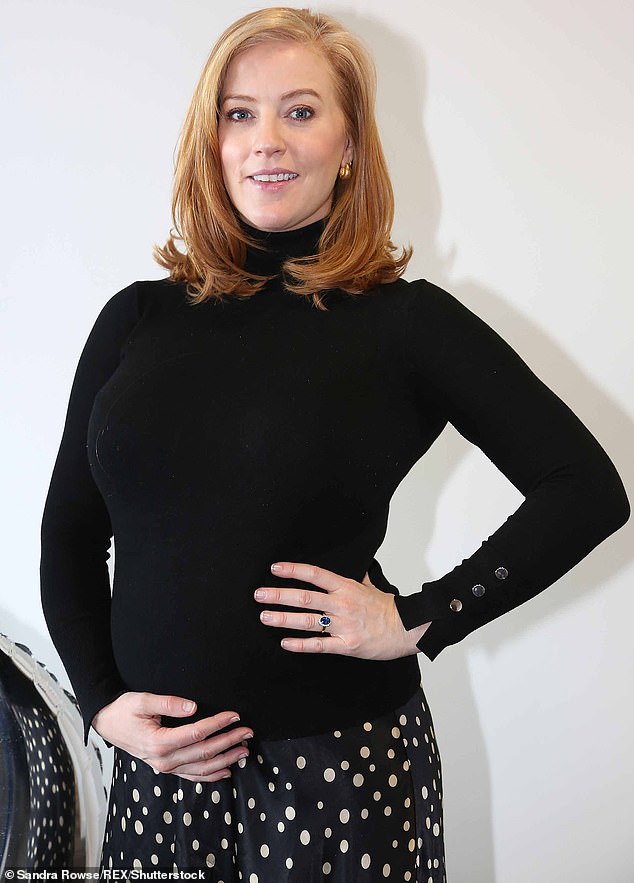 Sarah-Jane Mee, 41, (pictured) who is best known for anchoring Sky’s breakfast programme Sunrise, reflects on going from a singleton to a mum-to-be in 14 months

‘As I approached 40, everyone told me I would reassess and start thinking seriously about a partner and babies. It was such a powerful message, I began to worry I really would go into a tail spin.

‘There was no body clock thundering in my ear. I was adamant that I only wanted children with the right man and he simply hadn’t come along.

‘But they always say that if you are happy with every other part of your life then the final bit will fall into place. And that’s exactly what happened.’

In August 2018, just a month after she hit 40, everything changed. Sarah-Jane was on her way to an event in London attended by her friend Autumn Phillips, the now estranged wife of the Queen’s grandson, Peter Phillips.

‘I was feeling a bit under the weather and, as I needed to get up at 2am the next morning for my show, I almost cried off,’ she recalls. ‘I only went because it was a fundraiser and I didn’t want to let anyone down.’

On the way to the same party was entrepreneur and business owner Ben Richardson, also a friend of Autumn’s.

‘They were going for a quick drink in a nearby pub before the party,’ says Sarah-Jane. ‘Ben recognised me from TV and said to Autumn: “You’ll never guess who I’ve just seen — that red-headed Sky presenter. She’s lovely”. 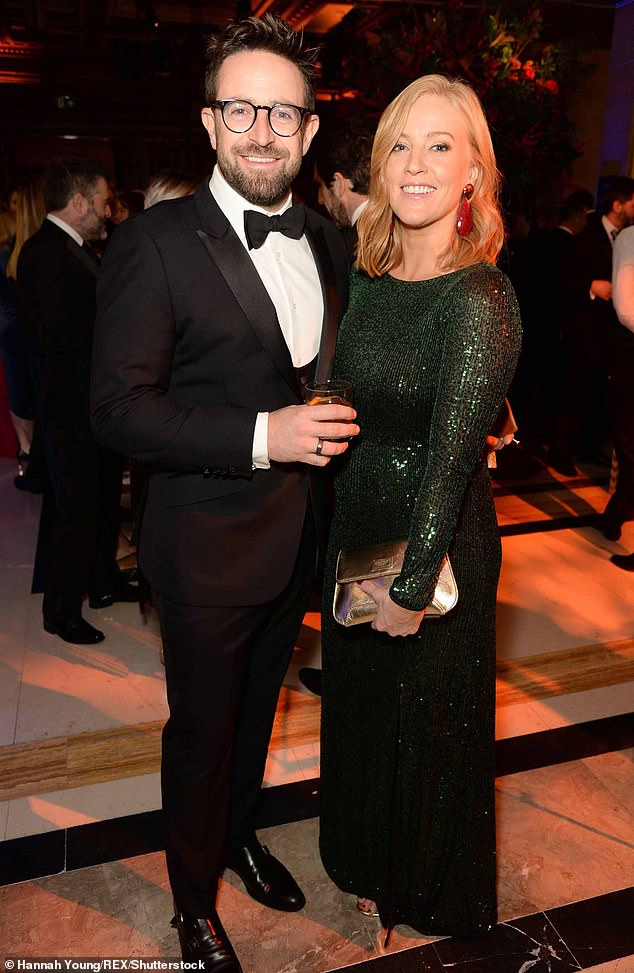 Sarah-Jane said entrepreneur and business owner Ben Richardson, offered her a drink while at an event in London with their mutual friend Autumn Phillips. Pictured: Ben and Sarah-Jane

‘When Autumn said that I would be at the party, she says he couldn’t finish his drink fast enough.’

Ben made a bee line for Sarah-Jane. ‘He offered me a drink and a seat at his table,’ she laughs. ‘I was blown away.’

Extracting Sarah-Jane’s number from Autumn, Ben messaged her the next morning.

Their relationship proceeded with breakneck speed. ‘When I realised I was rushing home from work to be with him, I realised how important he was,’ she says.

‘I was nervous because Ben made it very clear that Teddy is the centre of his world,’ says Sarah-Jane. ‘Teddy was staying with Ben. He came downstairs with a big bunch of flowers he’d helped Ben pick from the garden and said: “It’s lovely to meet you. Do you want to come and play?” ’

Teddy’s seal of approval came as he was leaving. Giving Sarah-Jane a hug, he announced: ‘I love you more than Lego.’

Sarah-Jane was thrilled. But what truly surprised her was the unexpected impact seeing Ben with his son had on her. ‘Seeing him with Teddy was so lovely, it switched my maternal urge on,’ says Sarah-Jane. ‘I could suddenly see us as parents.’

The following summer, Ben and Sarah-Jane started talking about having a family.

‘I tried not to get excited as I suspected, given my age, we would probably need IVF,’ says Sarah-Jane. ‘I took the precaution of going to see a fertility specialist privately. He took blood and urine samples, scanned my ovaries and said he saw no reason why I couldn’t fall pregnant naturally.’ Sarah-Jane (pictured) who discovered that she was pregnant in early October, was unaware that Ben was planning to propose

A test in early October showed Sarah-Jane was pregnant. It had taken just six weeks. ‘We were both thrilled and in total shock,’ says Sarah-Jane. ‘We suddenly needed to make so many changes — like getting a bigger home and changing my work.

‘I realised I would not cope with dawn starts while pregnant.’

Meanwhile, unbeknown to Sarah-Jane, Ben was planning to propose. He had a ring made — a sapphire surrounded by diamonds — and prepared the moment meticulously. ‘I honestly didn’t have a clue,’ says Sarah-Jane.

‘Four days before Christmas, Ben said he would take me out to dinner,’ says Sarah-Jane.

‘First we went to Piers Morgan’s annual festive party. Ben was trying to make small talk with Holly Willoughby and James Blunt while agonising about how to pop the question.

‘Later, we drove to a street I didn’t recognise. It was pouring with rain and suddenly Ben suggested taking a selfie. “Don’t you remember — it’s the spot where I first saw you,” he said.

‘I was getting out my phone, trying to humour him, when he went down on one knee. I was so stunned, he actually had to prompt me to say “yes”. He took me to dinner at the restaurant he’d sat in with Autumn.

‘Then it was a whirl of telling everyone our news, that we were engaged and expecting. 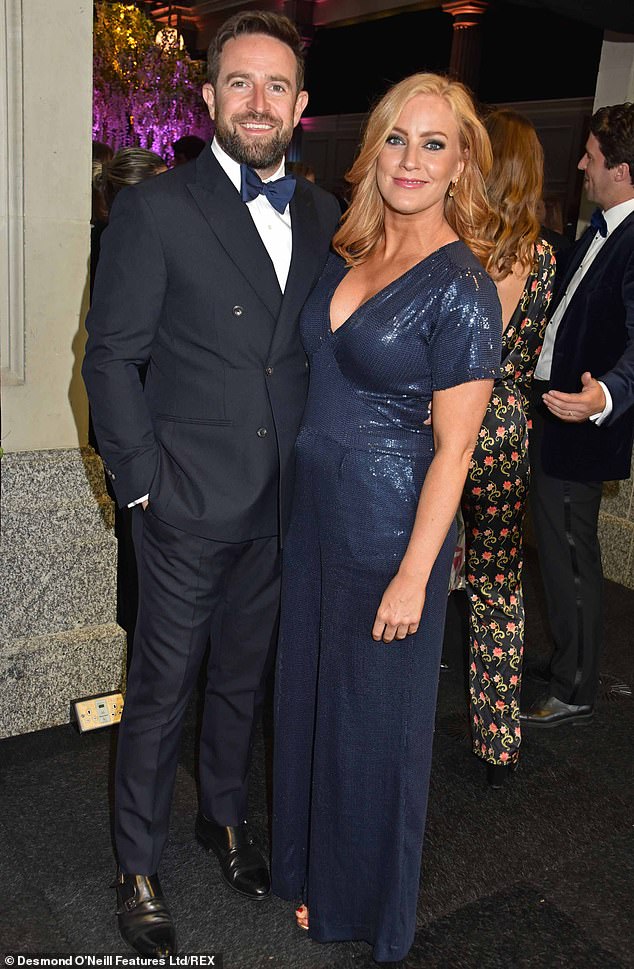 The Sky presenter who was advised to self-isolate for 12 weeks, said they waited until Christmas to tell Teddy that she’s pregnant. Pictured: Ben and Sarah-Jane

‘We waited until Christmas to tell Teddy. We had him on Boxing Day and gave him a T shirt saying: big brother.’

All in all, something of a fairytale for the woman who never saw herself as the Cinderella type.

However, it wouldn’t be true romance without a few obstacles.

Sarah-Jane had planned to carry on working until the summer. But now her world has shrunk to the size of her home.

With a baby due on June 27, despite being super-fit and active, Sarah-Jane was advised to self-isolate for 12 weeks.

She’s missing her job like crazy — although she is broadcasting regularly from home. ‘Sky News sent equipment to my home,’ she says. ‘It’s normally a job for six people but now I’m the camera operator, sound technician, hair and make-up, floor manager and broadcaster.’

But, most of all, she is missing her family, especially her mum, Lynda, 71. ‘It makes me really sad,’ says Sarah-Jane. ‘This will be her first grandchild.’

Sarah-Jane was determined to have a hospital birth. But with partner access to maternity wards restricted, she is less sure.

‘It’s really important to me that Ben can be with me from start to finish,’ she says. ‘So I’m now considering a home birth.’ 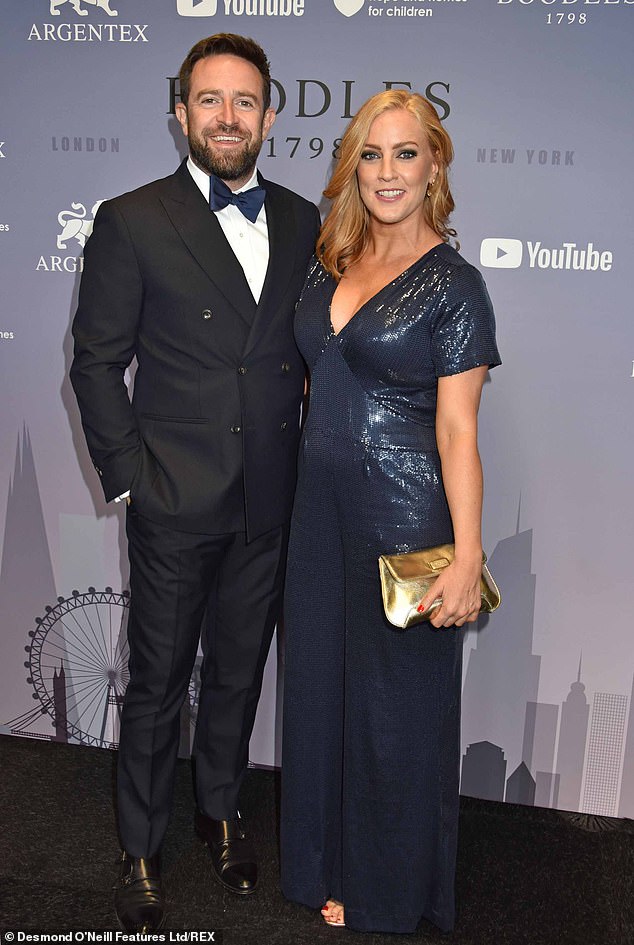 Then there’s the house move. Back in March, Sarah-Jane and Ben had been due to swap their two-bedroom flat for a bigger family home. The move — like everything else — had to be posponed. As lockdown restrictions eased, the couple were able to move last week, with just four weeks to go until her due date.

Despite the hurdles, Sarah-Jane is determined to stay positive.

‘I’m incredibly lucky to have Ben,’ she says. ‘He’s brilliant.’

Sarah-Jane has also been boosted by uplifting stories of communities pulling together.

‘I’ve launched a new podcast with Sky News from my front room that focuses only on the good news. #inthistogether has really lifted my spirits in lockdown and I hope it does the same for listeners,’ she says.

‘I have so much to look forward to. When this is all over I will have a baby and this weird time will just seem like a blip.’

Sarah-Jane hosts Sky’s In This Together Podcast, available from all the usual outlets.

Lesley-Anne Down: Upstairs Downstairs actress says stranger tried to kidnap her near home