The wedding songs most likely to lead to an unhappy marriage

Secret to a happy marriage? Elton John as your first dance: Couples who choose Can You Feel The Love Tonight are most likely to be in love, study shows

If you are hoping for a happy marriage, choosing an Elton John classic for your first dance might be a good place to start.

A poll of 5,500 married British couples discovered those who swayed to the singer’s Lion King hit Can You Feel The Love Tonight? were most likely to describe themselves as happy.

In contrast brides and grooms who picked One Direction’s No1 hit Little Things were most likely to say they are now unhappy, separated or divorced. 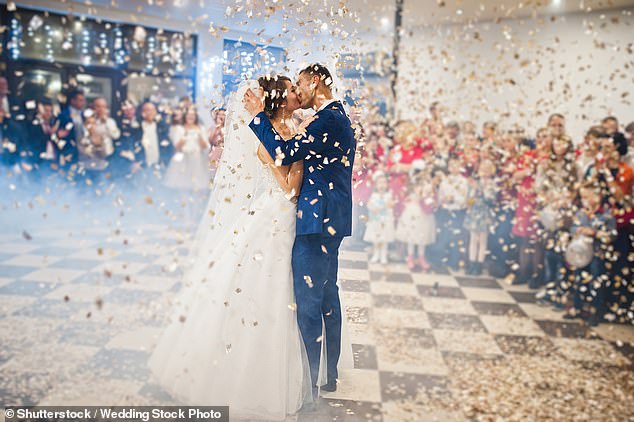 A poll of 5,500 married British couples discovered those who swayed to the singer’s Lion King hit Can You Feel The Love Tonight? were most likely to describe themselves as happy. Stock

The first dance songs that could make or break a marriage

Based on percentage of people who described themselves as being in a happy or unhappy marriage.

The study, conducted by online marketplace OnBuy.com, asked couple for their first dance song and then asked how they would describe their relationship.

Of the 506 couples who had Can You Feel The Love Tonight at their wedding, 77 per cent said they were in an ‘extremely happy marriage’.

Elton also appeared at number nine on the ‘happiest’ songs list, with 64 per cent of Your Song couples saying they are happy together.

Life isn’t as rosy for One Direction fans.

Of the 148 people polled who said they had Little Things for their first dance, 75 per cent – or 111 couples’ – are now not feeling the love.

Next on the list is Jason Mraz hit I’m Yours – with 61 per cent saying they are no longer happy – and Snow Patrol’s Chasing Cars came in third (56 per cent).

A spokesman for the company said: ‘First dances are one of the most memorable moments of a wedding, but not all lead to a ‘happily ever after’.

‘The secret, it seems, to a happy marriage is Elton John’s Lion King classic Can You Feel the Love Tonight, which 77 per cent of those who had it as a first song said they were in a very happy marriage.

‘The song most likely to lead to an unhappy marriage, separation or divorce was found to be One Direction’s song Little Things.’

Gigi Hadid Gives Birth to a Baby Girl! A Look Back at Her Relationship with Zayn Malik
Entertainment