Home » Lifestyle » The road to motherhood can be long and lonely The road to motherhood can be long and lonely

Philippa Pomeranz, daughter-in-law of film critic Margaret, was in her mid-30s when she and her husband of two years, Josh, decided to start a family. She thought the decision a no-brainer as most of her friends around the same age were pregnant.

"I assumed I'd be able to start a family," Philippa, who was working between Sydney and Los Angeles at the time, recalls. "A lot of women were having babies naturally in their late 30s." 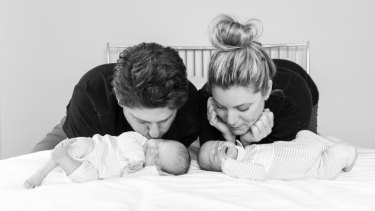 Josh and Philippa with babies Andie, left, and Hunter.Credit:Brittany Berggren/bbphotosite.com

Months passed and she hadn't fallen pregnant. She tried acupuncture and Chinese herbs while also, on the recommendation of a friend, having her follicles tested at an IVF clinic. She was informed she had lots of follicles, was healthy, and that Josh's sperm count was excellent. It was just "bad luck", and they should keep trying.

Three years went by, and after a few false alarms and one miscarriage they decided to start IVF by doing an egg retrieval and sperm collection, and to freeze embryos.

"It was such a learning process, figuring out what would be best for us, but with the clock ticking we decided that we had to start IVF," says Philippa. "By freezing embryos, rather than my eggs and Josh's sperm, we'd have a higher chance of success."

During six rounds of IVF in Australia, at a cost of $5000 to $7000 a round (with Medicare rebate of $3000), Philippa did fall pregnant three times but on each occasion miscarried at around two months.

"Between each round of IVF I would need to take time out to recover from the drugs, the injections and the disappointment," she says. "The next cycle then wouldn't happen for another six months, because I was recovering while also working.

"But I had no one knocking on my door saying, 'How are you feeling? It has been two months since we last saw you. Are you going to do another round?' Emotionally, I had to pick myself up and do the whole IVF round again. It is a very lonely experience.

"I also put on a lot of weight because my body thought it was pregnant. Feeling like this and not having a baby to show for it was making the journey even more cruel."

It was Philippa's IVF doctor in Australia who connected her to the San Diego IVF clinic; firstly because she was travelling a lot to the US for work, and secondly because the programs offered more options.

"The clinic had amazing financing packages and the one that we chose was the success guarantee package where you get reimbursed up to 100 per cent of the cycle fee."

The program currently offered at San Diego IVF costs $US36,000 for eight rounds of IVF, with a $US29,000 refund if it doesn't work.

"The attitude at this clinic was so positive and we felt very taken care of. They also offered surrogacy, which I was advised back in Australia was archaic and 'illegal'. If all else failed, we had an end game. So, in June 2015, we started our first transfer. Little did I know that it was going to be another three-year journey."

It was during this time that Philippa and Josh were informed that embryos could be tested to see if they were viable. "Even though this is considered tricky, it was worth it because we were informed that half the embryos would not be viable – something we wished we'd been told sooner in Australia."

Once the embryos were tested – and after eight more rounds of IVF, four more miscarriages and doctors saying that there was nothing physically wrong with the embryos or Philippa – they made the decision to use a surrogate. They sourced one through California agency Modern Family Surrogacy Center at a cost of $US140,000-$200,000 and with a limit of three rounds per surrogate.

"The surrogate we used got pregnant the first round and became pregnant with our beautiful twins Ellie and Parker," recalls Philippa. "Devastatingly, at 22 weeks and six days we lost both due to an unproven infection with our surrogate.

"Words will never describe how it felt having those babies pass in my arms. The most emotional hug I had in my life was when I saw my husband at the airport the next day. We were physically, emotionally and financially spent. Filling out death certificates and cremating two babies was one of the worst things I have ever done. I didn't know if I would recover."

Riddled with grief, after six weeks Philippa managed to pick herself up and keep going for the sake of the babies she had lost.

"I did look into adoption, which in the USA costs $US80,000," says Philippa. "But with four embryos left, in my heart I wanted to give it one more go with another surrogate. With the support of family, the agencies, our attorneys and the IVF clinic, we decided for one last attempt."

The first transfer was not successful. However, Philippa and Josh refused to give up. "I was told that it's better to transfer two embryos, not one, as the chances increase from 30 per cent to 50 per cent. The wonderful news was this second transfer worked."

While the surrogate was on bed rest for the whole pregnancy due to a tear in the placenta, after an eight-year journey, Hunter and Andie were born at 35 weeks on January 31, 2019. Philippa calls them her "rainbow babies" – babies born after a huge loss.

After all the silent pain Philippa endured, and to honour the memory of Ellie and Parker, she launched a charity called Pom Poms & Stardust to help those with fertility issues. She also wrote a song, Mother of Angels, with a close friend, musician Toby Rand. Proceeds from the soon-to-be-released song will go to support groups and creating an awareness program.

"This isn't about age," she says. "It's about fertility. I have so many young women contacting me about not being able to fall pregnant, miscarrying, and going through IVF. I believe, as women, we need to talk about this a lot more. And this way, we can."

• In Australia it is illegal to engage in commercial surrogacy. It is also illegal to place paid advertising for a surrogate or financially benefit from setting up an arrangement. Altruistic surrogacy with Australian surrogates is legal and has more than tripled in eight years, with over 50 singles and couples welcoming children in 2018.

• It is illegal in NSW, the ACT and Queensland for residents to engage in offshore commercial surrogacy. However, those laws have never been prosecuted and numerous couples go offshore. Some academics and consumers are advocating for such laws to be repealed.

• Altruistic surrogacy is also available to Australians in Canada and Greece, though Canada is not coping well with high demand. In response, the organisation Surrogacy Australia has recently set up a support service to facilitate better access to and support of Australian surrogates. Other nations popular with Australians seeking surrogacy include USA, Ukraine and Georgia.

• The eighth national Australian Surrogacy & Donor Conference for surrogates and intending parents will be held on June 2 in Melbourne.

This article appears in Sunday Life magazine within the Sun-Herald and the Sunday Age on sale May 26.

How ‘RHOBH’ star Teddi Mellencamp keeps herself accountable at barbecues