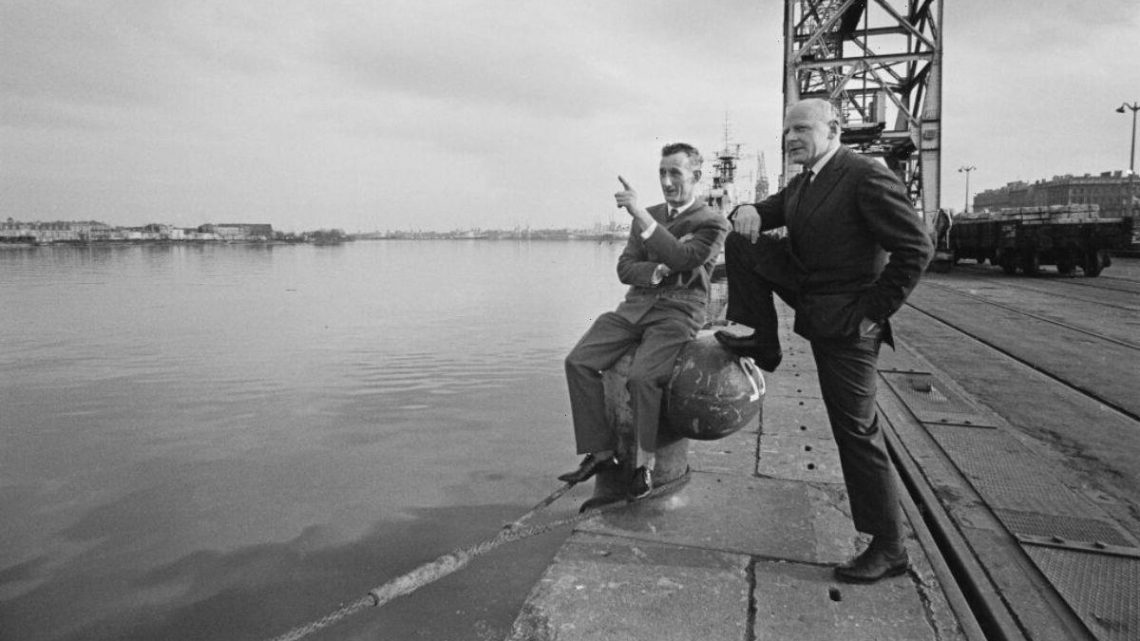 In the evening darkness of December 7, 1942, the attack phase of Operation Frankton, the codename for perhaps the most audacious special forces operation of the Second World War, was about to get underway. Twelve men, faces blackened, prepared to lower their six canoes into the Bay of Biscay but already there was a problem: one of the plywood and canvas “cockles”, as the specialist canoes were known, had been ripped during the unloading so the mission was down to just 10 men.

At 8.22pm, the five undamaged cockles were lined up along the side of sub HMS Tuna and Major Herbert ‘Blondie’ Hasler, in command of the mission, joked to the two men left behind that he would see them in three months and they should book a table at the Savoy Hotel for the reunion.

In fact, there would be barely enough survivors to honour a booking.

I travelled to Bordeaux earlier this year to retrace the route taken by the Cockleshell Heroes during their epic mission behind enemy lines and to pay my respects to the volunteers told the operation was so dangerous they were likely to die.

I have been enthralled by the story ever since, aged nine, I watched the 1955 film The Cockleshell Heroes – starring Trevor Howard, Anthony Newley and Christopher Lee – in my local cinema.

The more I read about the mission over the years, the more I became captivated by the intrepid adventure behind enemy lines.

The men of Operation Frankton had been training for months, since the formation in July 1942 of the Royal Marine Boom Patrol Detachment – a forerunner of today’s Special Boat Service (SBS) – to put into practice Hasler’s daring plan of attacking enemy ships using canoes and limpet mines.

The hand-picked men were all superbly fit and, in the words of Hasler, their key requirements were that they were “eager to engage the enemy; indifferent to their personal safety; intelligent; nimble; free from family ties or dependents; able to swim; and of good physique and eyesight”.

Hasler chose Corporal Bill Sparks as his number two on the mission.

The men complemented each other: Hasler could get anxious when problems arose but, when things were going badly, Sparks was cheerful and cracked jokes to boost morale.

As the 10 men paddled away from the submarine towards the Gironde estuary, each was armed with an automatic pistol, a commando knife and a grenade. Each 15-feet canoe carried eight limpet mines, rations, and kit for their mission and subsequent escape.

With the submarine unable to pick them up post-attack, the plan was for the men to scuttle their canoes and travel through occupied France to Spain… if they survived.

For the first two hours they made good progress but 10 miles from the mouth of the Gironde, and still 90 miles short of their targets, the cockles were caught in a vicious tide. In the swirling waters one of the craft, Coalfish, disappeared. Shortly after, as they reached the estuary, came the roar of breaking water and, in five-feet high waves, a second canoe, Conger, was damaged.

The cockle was scuttled and its two Royal Marines, clinging desperately to the sterns of Catfish and Cuttlefish, were towed towards land, close to the lighthouse at Pointe de Grave, before Hasler said: “I am afraid this is as far as we can take you… God bless you both.”

The next obstacle was four German ships at anchor off the Verdon jetty. They decided to paddle past at full speed, one pair at a time, but Cuttlefish could not be located after the dash. Sparks later wrote: “During that first night we had lost two-thirds of our strike force. It began to look as though the operation was doomed to failure.”

Worse still, the submarine Tuna had been picked up on radar and, on heightened alert, the Germans had captured the two Royal Marines from Coalfish – the first of the cockles to disappear – and were now on the look-out for the remainder of the suspected raiding party.

As daylight approached, the four remaining men found a hide-out and slept, exhausted and wet, under camouflage nets. Their maps, marked with numerous watch-towers, anti-aircraft batteries and long stretches of the river bank where German patrols were known to operate, revealed the dangers still ahead.

They made reasonable progress during the second night, despite nearly being run down by a convoy of large vessels, before beaching to spend the daylight hours hidden. The end of the third night found them close to the Bordeaux quayside, but Hasler decided to postpone the attack until high tide the next evening so they hid beneath large plants near a busy road.

At 9pm on the night of December 11, Hasler ordered that the limpets should be armed and the time fuses set to detonate in nine hours, giving them time to get away after attaching them to ships.

At 9.15pm, the four men shook hands and the two cockles slipped silently along the quayside, Hasler and Sparks taking their canoe, Catfish, up the western side of the docks and the other two, in Crayfish, paddling into the East Docks.

An hour and a half later, Sparks drifted Catfish alongside a line of vessels and Hasler fitted the first limpet mine to Tannenfels, an enemy steamer. Two more mines followed before they moved on to the second target, the minesweeper, Sperrbrecker 5.

At one point a torch light was shone towards them from some 15 feet away but, miraculously, they were not spotted.

After attaching their remaining mines, the two men headed downstream as fast as they could. They burst into quiet laughter as they saw Crayfish come into view “like a Mississippi stern-wheeler at full speed”. Its crew, Corporal Albert Laver and Marine William Mills, had attached five mines to one enemy ship and three to another.

The four men were too far away to hear the explosions when the mines went off. However, despite their losses, the mission was a success. Back in Britain, however, HQ Combined Operations had intercepted a German High Command report reading: “A small British sabotage squad was engaged at the mouth of the River Gironde and finished off in combat.”

Despite that, combined ops chief Earl Mountbatten, who had approved the raid, retained a sneaking suspicion one or more of the cockles had made it through.

Shortly afterwards, an aerial photograph of Bordeaux docks confirmed several ships had been sunk or badly damaged. There was no word, however, of the ten Royal Marines and, indeed, as late as January 1943 all remained posted as missing.

In fact, the four survivors had decided to travel in separate pairs across France to reduce their chances of being detected. They said their farewells and agreed to meet for “a couple of pints” in Granada, northern Spain.

“Now I know how a cowboy feels when he has to shoot his horse because it’s broken its leg,” Sparks later wrote of cutting up and burying his faithful cockle. A farmer’s wife gave Hasler and Sparks dry civilian clothes and they ditched their military uniforms, despite knowing if they were caught they faced execution as spies. On December 18, the two men reached the French town of Ruffec, where they made contact with the French Resistance.

They had a three-week wait in Ruffec but eventually linked up with the “Marie-Claire Escape Line” to reach Marseilles where, after a month in a safe house, they moved on to Perpignan and eventually trekked across the Pyrenees to Spain.

Corporal Laver and Marine Mills were also recommended for the DSM but at the time the decoration could not be awarded posthumously so instead they were Mentioned in Despatches. PM Winston Churchill claimed the mission had shortened the war by six months. After the war, the two survivors, particularly Sparks, became incensed that their dead comrades had received no posthumous gallantry awards for their outstanding bravery.

Today there is a walking path which traces the 100-mile route taken on foot through occupied France by Hasler and Sparks. Known as the Frankton Trail and opened in June 2002, it seeks to keep alive the story of the mission, and those who didn’t make it. It was the story of the Cockleshell Heroes more than any other war story, along with my father Eric’s account of his role in the D-Day Landings, that inspired my lifelong interest in courage and desire to build up several gallantry medal collections.

As well as the largest collection of Victoria Crosses in the world, I have a separate Special Forces medal collection. Pride of place goes to Corporal Sparks’ DSM which, along with his service medals, I purchased 14 years before his death in December 2002, aged 80. Modest until the day he died, Sparks ended his book, Cockleshell Commando: The Memoirs of Bill Sparks: “I continue to do my best to keep alive the memory of those who paid the supreme sacrifice back in those black days in December 1942. They are the ‘Cockleshell Heroes’. I am merely the proud spokesman for these exceptionally brave men.”

Before leaving France, I visited a memorial to the Cockleshell Heroes which was unveiled in 2011, close to the spot where the men began their mission 80 years ago. I felt deeply moved as I read aloud the words of Earl Mountbatten inscribed on the monument: “Of the many brave and dashing raids carried out by the men of Combined Operations Command, none was more courageous or imaginative than Operation Frankton.”

Starting to plan your festive tablescape? 13 accessories that will bring the mood
Entertainment