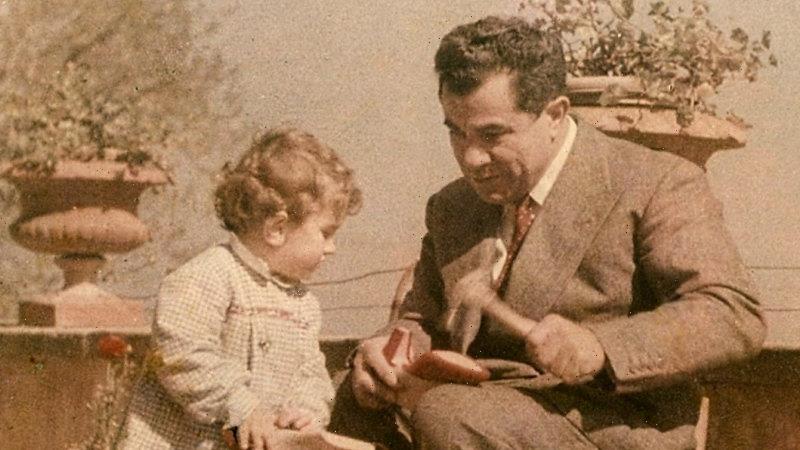 Salvatore Ferragamo made his first two pairs of shoes when he was nine. Two of his sisters didn’t have proper shoes to wear to their first communions; he saved the day. At 10, he battled his humble family’s objections to go and work for the local shoemaker, a job considered too lowly even for them. A year later he went to work in a Naples fashion store to learn the business. By the age of 13, he was running a company making handmade shoes, employing workers many years older than he was. A few years later, he was swept up in a new industry of which he became an integral part: Hollywood.

Ferragamo told his own remarkable story in his 1957 autobiography Shoemaker of Dreams, published just three years before he died. Luca Guadagnino, whose films include A Bigger Splash, Call Me By Your Name and this year’s succes de scandale, Bones and All – a film about cannibals that just won him the prize as Best Director at the Venice Film Festival – was gripped when he read it. “It struck me very much – its incredible, vibrant, feverish, maverick outsider point of view on creation and the entrepreneurial aspect of his life.” 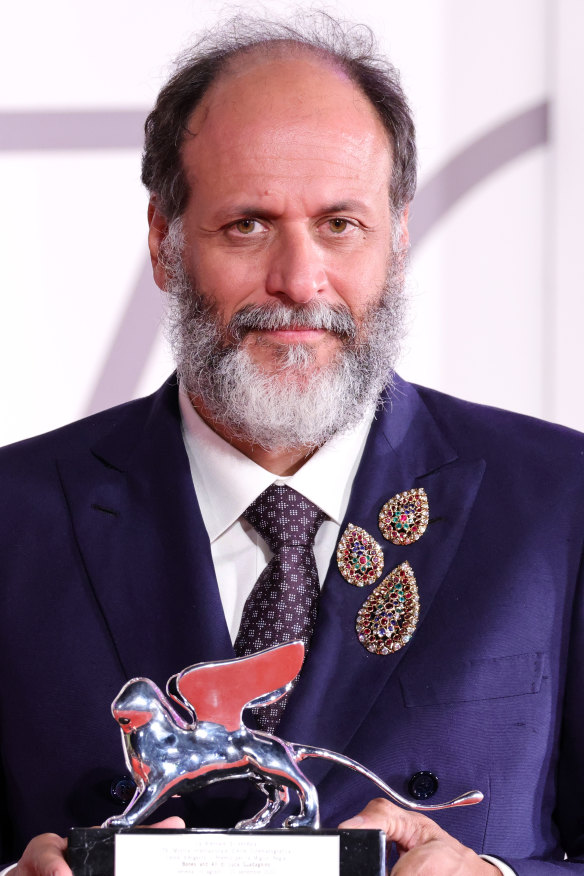 Luca Guadagnino with the Silver Lion for Best Director at the Venice International Film Festival.Credit:Getty Images

Guadagnino is a designer himself, alongside his celebrated career as a filmmaker. Studio Luca Guadagnino creates interiors for retail, hospitality and private spaces, including one-off pieces of furniture. “It is not a mystery that I am someone who has a very strong connection with the fashion world,” he says. He already knew the Ferragamo family, which still controls and runs the company – now an expanded luxury goods firm with shops around the world – after having directed some of their advertisements. “So I asked them if I could sneak into their archives. And once I discovered this trove of treasure that was so wonderful, I told them I was very game for bringing the book to life.” 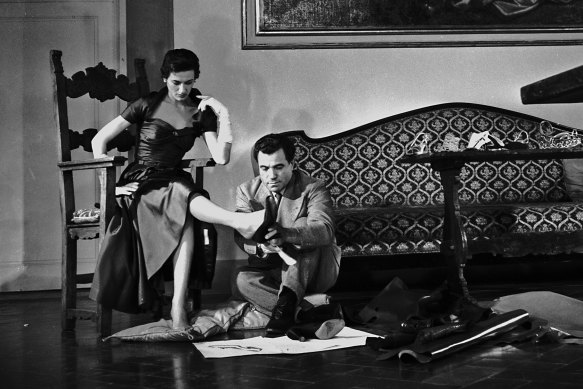 Salvatore: Shoemaker of Dreams took three years to assemble. Guadagnino burrowed into the archives of other museums to research Italian emigration in the early 20th century, the history of fashion and the history of Hollywood. His list of interviewees is exhaustive and illuminating. Martin Scorsese talks about early Hollywood and the opportunity it offered for reinvention of the self. “He not only reinvented himself,” says Guardagnino, “but also participated in creating an industry.”

Manolo Blahnik and Christian Louboutin talk about the shoes themselves. We hear from Ferragamo’s middle-aged great-grandchildren and from fashion editors who assess his influence. Costume designer and academic Deborah Nadoolman Landis takes a close look at Ferragamo’s understanding of costume as a tool in character creation. In between, Guadagnino gives us Ferragamo’s illustrated life story, from its hardscrabble beginnings to its triumphant, if premature, end, with a narration by fashion historian Dana Thomas. There are even fragments of the master’s voice, mostly taken from interviews he gave to Australian radio when he visited in 1958.

It comes as a surprise to see the director known for lush excess in films such as I Am Love and Call Me By Your Name, and whose new film features Timothee Chalamet eating dead bodies, venturing into documentary and playing it so very straight. Not at all, says Guadagnino; he always holds that less is more. “We shouldn’t confound the excesses of what the characters do in Bones and All with the excesses of the filmmaker. I feel Bones and All is really quite restrained; I like the idea of always being restrained in what I do. A word I like very much these days is ‘modesty’.”

But there is no doubt in Salvatore: Shoemaker of Dreams where Guadagnino’s heart lies: with a world where modesty rarely raises its head. The most vibrant section of the film, following the details of the genius artisan’s extraordinary childhood, is the account of the 13 years Ferragamo spent in America as Hollywood’s cobbler. The film industry was in the process of inventing itself in 1915 when Ferragamo, having thrilled to the vastness of the country he crossed to get there, settled in its first home base, Santa Barbara. The move to Hollywood came a few years later.

There were no stars in the early days; actors were virtually interchangeable. Films were short, with an emphasis on action. Ferragamo started out by making a lot of cowboy boots; later he could let his formidable imagination rip coming up with fanciful slippers for The Thief of Baghdad and elaborate sandals for The Ten Commandments. “He was there for the silent era; he saw then the rising of the stars, which I feel he also contributed to with his idea of the image of the star being so polished and so perfect, and then he was there when the new stars came,” says Guadagnino. 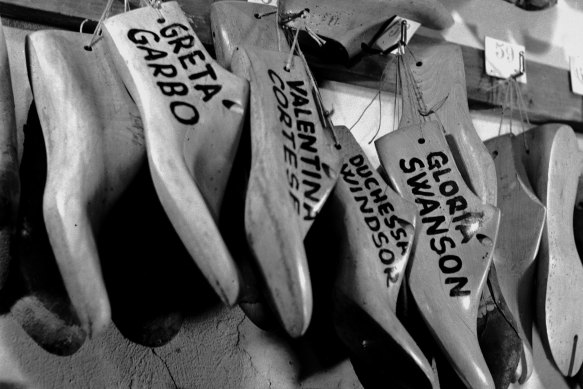 Some of Ferragamo’s shoe shapes for his VIP clients.Credit:© Alinari. Courtesy of Sony Pictures Classics

Personal clients included Mary Pickford, Gloria Swanson and Rudolph Valentino. Meanwhile, he went to university night classes to study anatomy. He was fascinated by feet. There are no bad feet, he was to say later. There were only bad shoes. Back in Italy, he would make shoes for Audrey Hepburn, Sophia Loren and Marilyn Monroe. The film shows a Monroe shoe being made: the leather cut and glued to the frame balanced as exactly as a bridge, the vertiginous heel he devised for her made of wood and steel, the red sparkles added, the finished product a fantasy itself.

“I think Ferragamo was an inventor above all things,” says Guadagnino. “He was inventing constantly … like the way he made the feet sit on top of a piece of steel so the comfort would go hand in hand with the design. He invented stuff not only in the world of fashion, but he invented a brace for when you break your leg … And so on and so on.”

Guadagnino’s own favourites are the shoes Ferragamo made during World War II, when leather was unobtainable, using materials that had never been used in luxury goods before: cork, straw, mesh made of recycled plastic. “He was like a volcano of ideas but also, at the same time, had almost like a monkish quality of inspiration, concentration and focus on making things happen.” Perhaps, Guadagnino adds, that is why he died at 62.

What he seems to have identified in Salvatore Ferragamo, purveyor of luxury and fantasy, is a puritanical commitment to hard work. “Well, I don’t see how you can achieve greatness without a very strict discipline and a total devotion to the actual act of working and inspiring other people to work for you,” he says. 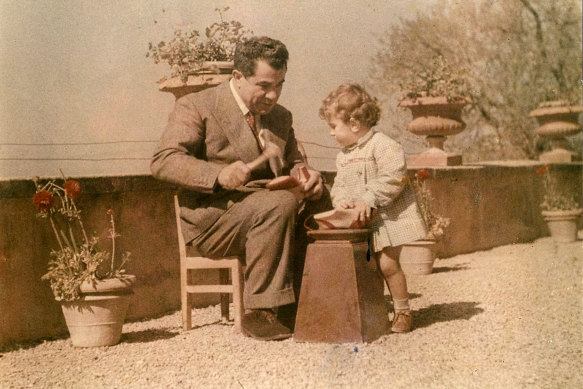 He might be talking about himself. It was only this year that Guadagnino exhibited work from his design studio for the first time, revealing that he was pursuing two demanding jobs simultaneously. “I am kind of workaholic,” he agrees. “I work basically now 17 hours a day. The good news about filmmaking is you wait a lot. You wait for the shot to be set up, you wait for the actors to be ready. I have a multi-tasking sort of approach to things so, in between, I can also take decisions that pertain to other aspects of my life.” He laughs. “I am a very disciplined workaholic monk.” A perfect match for Salvatore Ferragamo.

Salvatore: Shoemaker of Dreams screens as part of the Italian Film Festival, running until October 12. italianfilmfestival.com.au

Smart meter error left me lying awake at night about how to pay £1,900 energy bill debt | The Sun
Entertainment