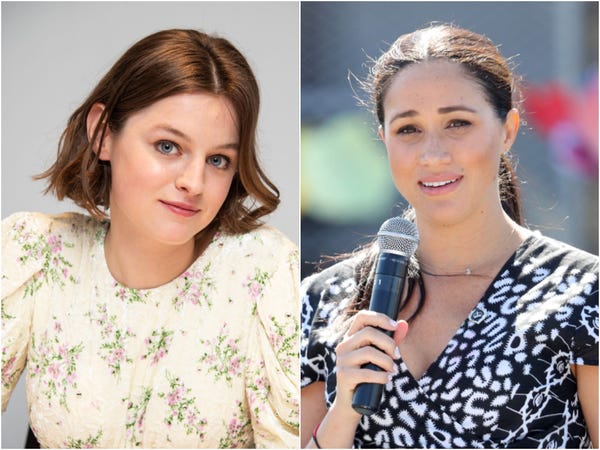 The actress who plays Princess Diana on "The Crown" said royal history is repeating itself with the Duchess of Sussex.

Emma Corrin, who will portray the late Princess of Wales on the show's fourth season, spoke to Town and Country's Elizabeth Holmes about the similarities between how Diana and Markle are treated by the press.

"It's impossible to watch Diana's entrance and attempts to acclimate without thinking of the treatment of Meghan Markle," royal author Holmes noted in the article.

"Besieged by racist tabloids and reportedly unsupported by the royal family, Prince Harry and his bride left their roles as senior working royals last spring. This was not the Firm's finest year, nor is this season of 'The Crown' the kindest portrayal. Diana is embraced at first, but then she is ignored, laughed at, and scolded," she added.

Speaking about the royals' situation today, she added: "You just want to shake these tabloids and say, can't you see history repeating itself?"

It's not the first time parallels have been made between Markle and Diana's treatment in the tabloid media.

Prince Harry made a similar statement last year when he said he feared "history repeating itself" for his wife.

"Though this action may not be the safe one," he said, referencing Markle's lawsuit against the Mail on Sunday, "it is the right one. Because my deepest fear is history repeating itself. I've seen what happens when someone I love is commoditized to the point that they are no longer treated or seen as a real person. I lost my mother and now I watch my wife falling victim to the same powerful forces."

The Duchess of Sussex is suing the Mail on Sunday over the misuse of private information, infringement of copyright, and breach of the Data Protection Act 2018 after it published a private letter she wrote to her father.

Diana was known to have a complex relationship with the press.

She was killed in a Paris car accident in 1997 after being chased by a group of paparazzi on motorcycles. Although an official investigation found they weren't the cause of the crash, many people have suggested they were a contributing factor.

Odell Beckham Jr. Dragged for Saying COVID-19 Needs Consent to Get to Him

How to install a home cinema with a projector – and how much does it cost?
Entertainment