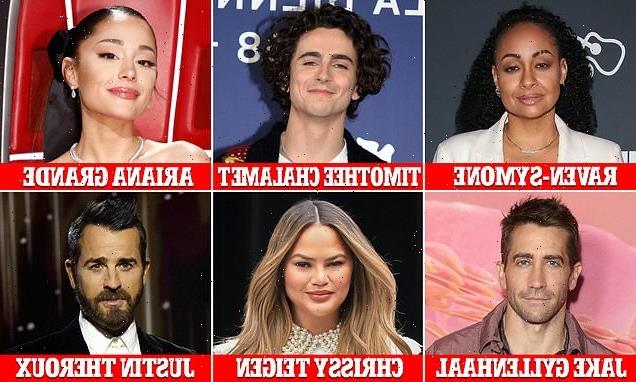 The celebrity names you have been pronouncing the wrong way

Whoops! As Raven-Symoné reveals fans have been saying her name the wrong way for 30 YEARS, FEMAIL reveals the OTHER most commonly-mispronounced celebrity monikers… so how many can YOU get right?

The likes of Ariana Grande, Brendan Fraser and Jake Gyllenhaal are stars whose names are recognizable all over the globe.

However, it appears fans have been saying many famous names wrong over the years. So much so, that the stars themselves have chosen to move forward with the incorrect pronunciation.

Taking to TikTok in a new video on Thursday, actress Raven-Symoné became the latest star to reveal that people had been mispronouncing her distinctive moniker.

In the short clip, she calmly revealed that everyone know that it’s ‘see-mon-ye’ instead of ‘Si-moan’. 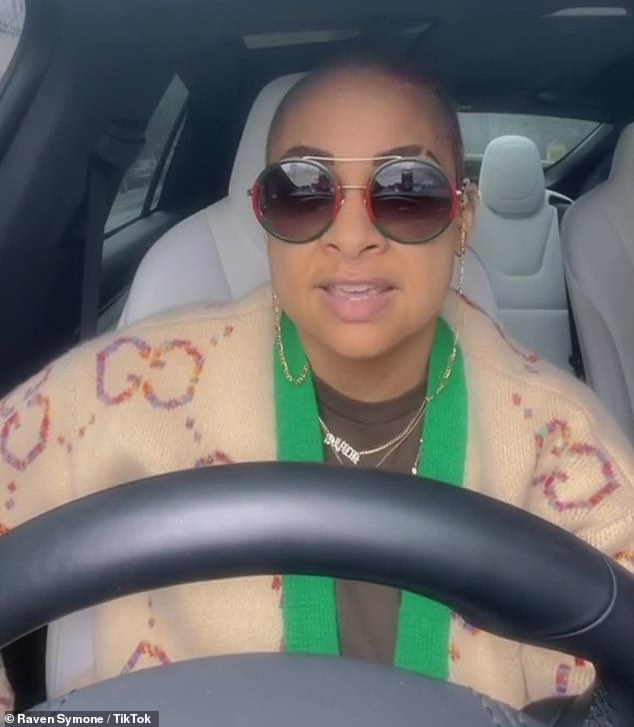 Raven-Symone, 37, revealed to her fans on TikTok that her last name has been mispronounced for years and explained the correct way to say the name is See-mon-ye

The revelation came as a shock for the many fans who have followed the 37-year-old actress’ career since she was a child star in The Cosby Show in 1989.

Many pointed out that the actress herself had been her own name the ‘wrong’ way throughout her career – including in multiple Disney clips.

Raven’s post came just days after Brendan Fraser and Margot Robbie also made claims of their names being said incorrectly.

Elsewhere stars such Lindsay Lohan and Chrissy Teigen have previously made headlines after confirming that they monikers have always been said wrong by the general public. 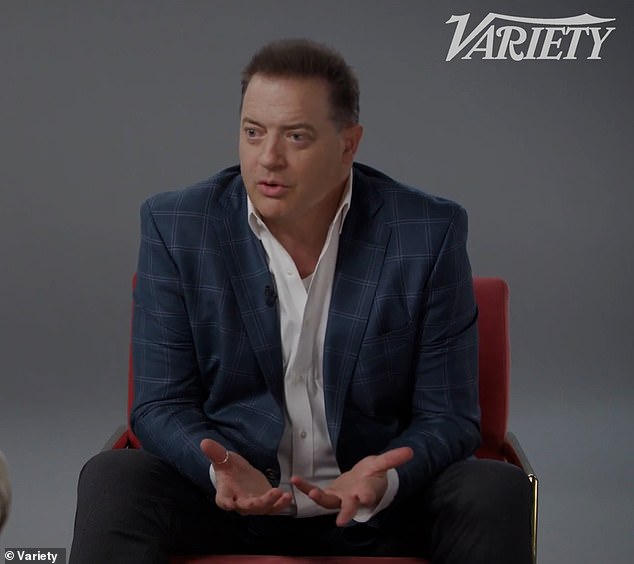 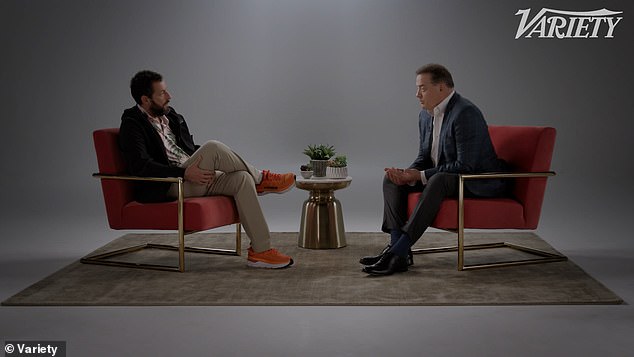 The actor, 54, revealed it’s ‘supposed to be like razor’ after several people kept calling the star Brendan Fray-zsur like the show Frasier

Brendan Fraser insisted ‘no one’s ever gotten my name right’ as during a recent chat with Adam Sandler for Variety.

The actor, 54, explained how to pronounce his name after pointing out that most people pronounce his surname as ‘Fray-zsur’ , like the TV show Frasier.

However, The Mummy star said it is ‘supposed to be like razor’ before ‘giving up’ on the hope someone will get it right.

Later in the interview, The Just Go With It star mispronounced it again and Brendan made a razor gesture to remind him.

Eventually, Brendan ‘gave up’ on the hope of his name being pronounced properly and added: ‘Ok. F*** it. No one’s ever gotten my name right.’ 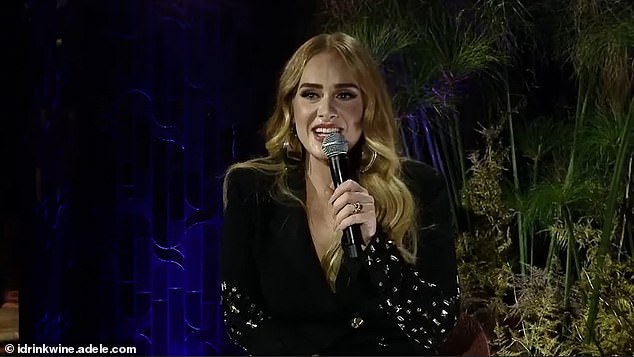 Adele revealed she prefers people to call her ‘uh-dale’ instead of ‘uh-dell’, staying true to her North London roots

Adele confessed that most of her fans have been saying her name wrong last year.

Speaking during Happy Hour with Adele with Benito Skinner after her ‘I Drink Wine’ music video was released, one fan asked her about writing 30 and her journey to self-love.

The fan, talking on a video, happened to nail the pronunciation of her name in the process, leaving Adele, 34, impressed.

Referring to an area near where she was born she said: ‘Where’s she from, Enfield? She said my name perfectly!’

The mother-of-one then said that she prefers people to call her ‘uh-dale’ instead of ‘uh-dell’, staying true to her North London roots and accent. 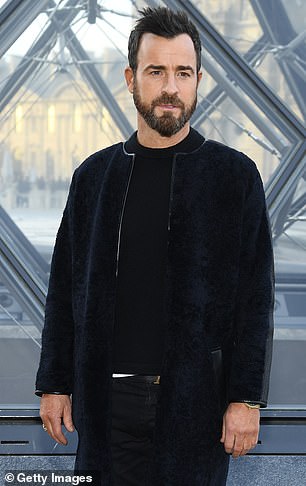 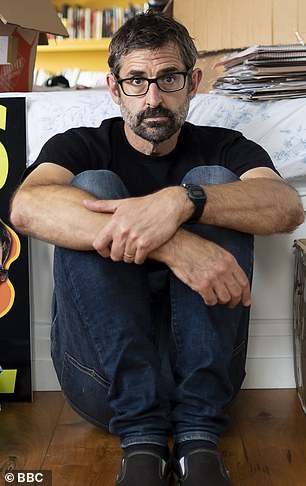 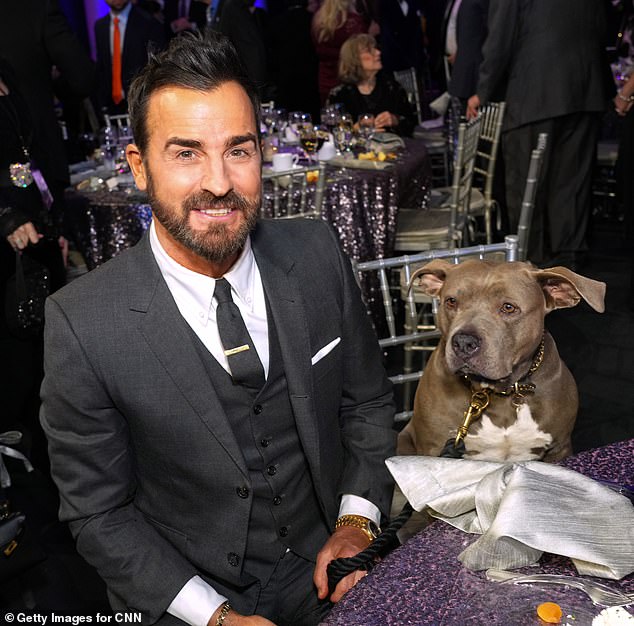 Hollywood actor Justin Theroux and his British cousin Louis Theroux clashed over how to pronounce their surname during a light-hearted interview in 2021.

During the conversation, the pair admitted they disagree over the pronunciation of their surname.

Introducing his cousin with his full name, Louis said: ‘I hesitate to give our common name the mispronunciation you insist on.’

‘You go by “ther-oo” and I go by “ther-oh”,’ Justin explained,’ prompting Louis, 52, to respond: ‘Or to put it another way, I use the correct pronunciation, and you use some weird, incorrect one.’

Backing up his argument, Louis pointed to the French origin of the surname.

‘Theroux, it’s a word of French origin,’ he pointed out. I guess the related words would be ones like “roux” (pronounced “roo”), as in roux sauce…’

Not to be outdone, Justin retorted: ‘If you wanted to get technical, when you go to France they say “Bonjour, Mr Terr-oo”, they put the “T” on it, so maybe you’re wrong, maybe we’re both wrong.’

Prior to the pair’s chat, Justin’s uncle also commented on how the actor preferred to say his name during an interview with Apple TV+. 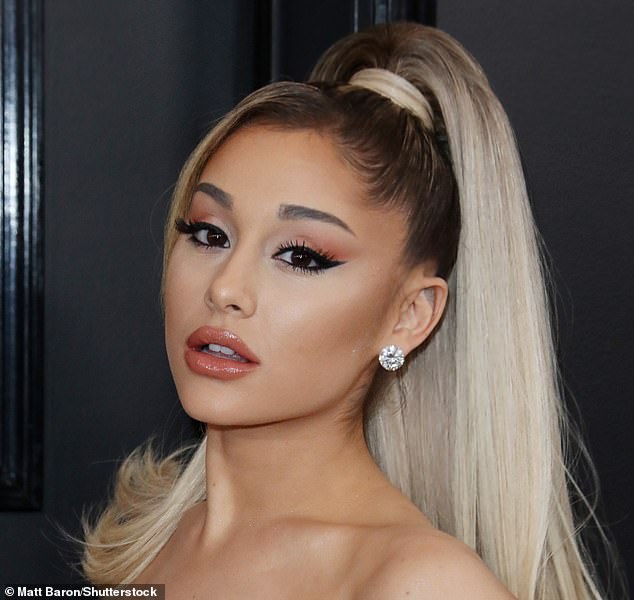 Pop star Ariana Grande has previously revealed she allowed her last name to be pronounced wrong by the media.

The 29-year-old singer, who has been performing since she was a child, explained her last name is less like the coffee, and actually rhymes with candy.

She told Beats 1’s Ebro Darden that she had pronounced her last name as ‘gran-dee’ when she was growing up.

In fact, the pronunciation has always been ‘gran-dee’ in the Grande family.

A video of the singer pronouncing her name as ‘Grandee’ and not ‘Granday’ left many fans stunned.

However she has continued to go with the popular pronunciation since the reveal. 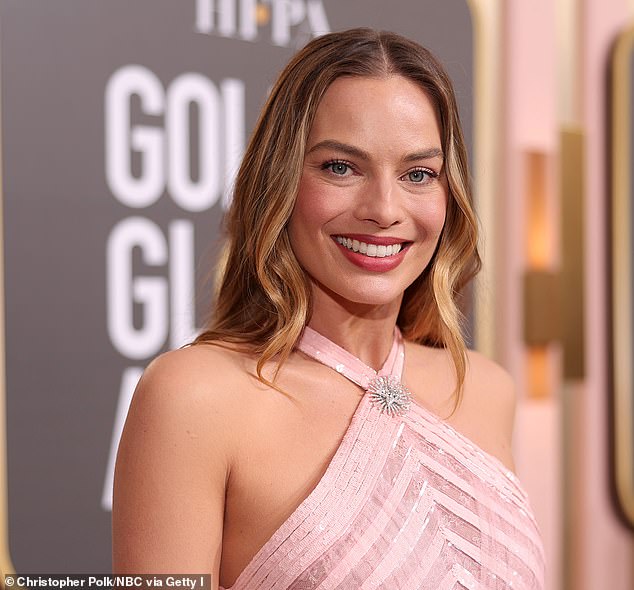 During a recent interview to promote her film, Babylon, Margot Robbie revealed the unknown different in how her name is pronounced in her homeland.

The Queensland-born beauty said she loves returning to Australia because she feels how ‘proud’ her home country because Aussies correctly pronounce her name, compared to  Americans.

She explained: ‘ You know, you have the premiere and people scream out your name. I just love hearing my name with an Aussie accent too because in America everyone hits the R. 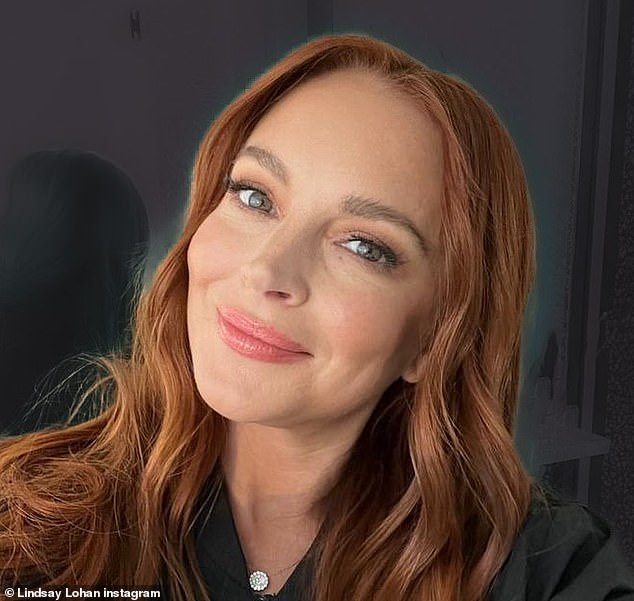 For her TikTok debut in 2022, Lindsay Lohan left fans stunned when she highlighted the way her last name is said.

‘Hey everyone. It’s Lindsay Lohan, and guess what? Now I’m on TikTok,’ she said in the five-second video.

Lindsay unwittingly corrected fans by saying her last name is pronounced ‘Lo-wen’ instead of ‘Lo-han.’

The brief video showcased the Mean Girls star outside, wearing a white sweater and diamond earrings, making a smiling proclamation.

The Parent Trap star’s simple video caused a flurry of comments as one fan wrote: ‘Wait. Lindsay, “LOWEN”?!?! I’ve been saying it wrong my whole life?!?”’ 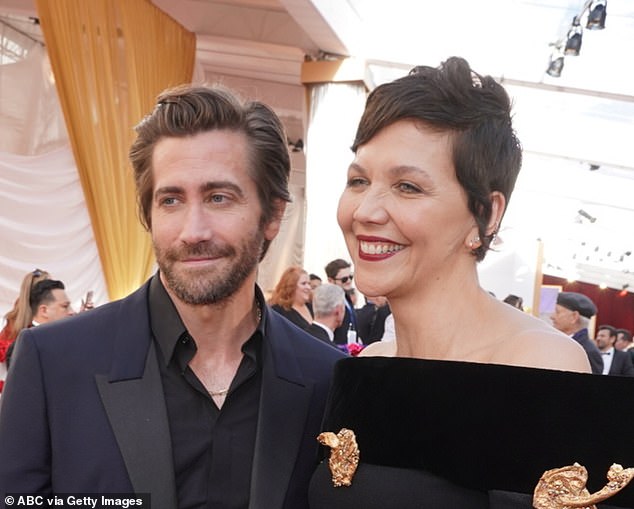 Jake Gyllenhaal has been a name on people’s lips since he was a young actor but the universal pronunciation couldn’t be more inaccurate.

Fans of both Jake and his sister Maggie usually say ‘Jill-en-hall’ but the actor opened up about the unexpected why his Swedish last name should be said.

In an TV interview with Conan O’Brien, he joked that ‘only two places that that is pronounced correctly, my last name, is in Sweden and in Ikea.’

The correct way to say his name is ‘Yen-lee-hey-lo’. 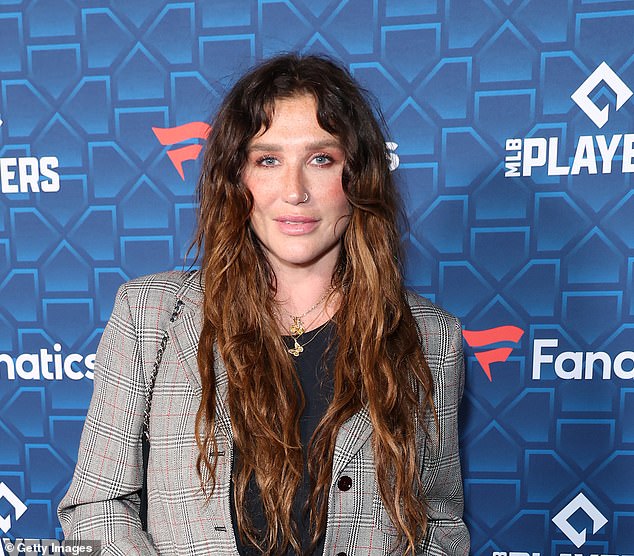 Kesha set the record straight when she told fans, ‘My name is Kesha. Keh-sha. Not Kee-Sha’

#stitch with @mahoganylox Not ketchup!

Singer Kesha is another star who used the power of TikTok to reveal the right way to say her name.

When asked, ‘Tell me what your name is and then tell me what people mispronounce it as,’ she replied: ‘My name is Kesha. Keh-sha. Not Kee-Sha. Not Ketchup. Kesha.’

‘The name is actually pronounced Ket-ta-cha in Hungarian and so I decided to make it easier and to make it Kesha. And that’s where Kesha came from.’ 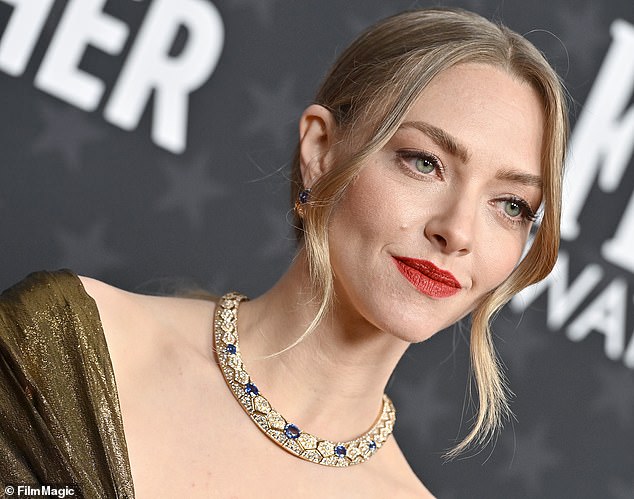 Amanda Seyfried’s name has been pronounced in a variety of ways but it is actually meant to be ‘Sigh-fred’.

Ever since finding fame in Mean Girls, Amanda Seyfried’s name has been pronounced in a variety of ways.

While ‘Say-freed’ and ‘Sea-fred’ are two of the more common options, the star confirmed it is actually meant to be ‘Sigh-fred’.

Amanda confirmed as much during the announcement of Oscar nominations by Brad Pitt as she tweeted: ‘Correct pronunciation of “Seyfried” by Brad Pitt. Thank you, @theacademy.’

In an interview with Hollywood Streams, the actress said the worst pronunciation of her last name would be ‘Say-fried’ or ‘Sig-freed’. 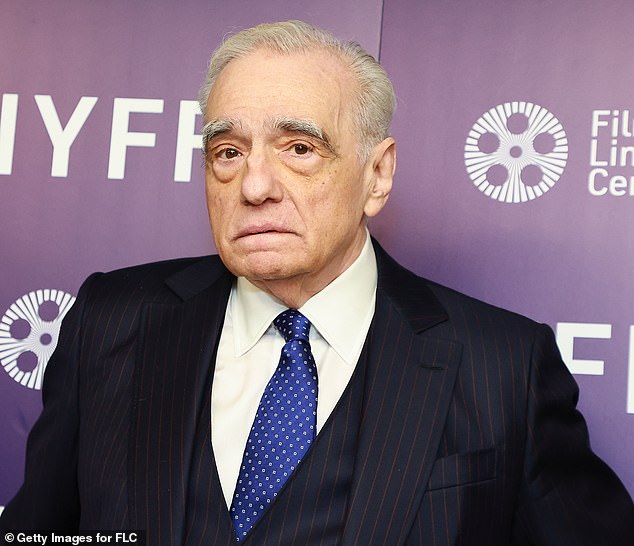 Many fans of legendary director Martin Scorsese have been saying his name wrong for years.

Indeed, the popular way to pronounce the name is ‘Scor-say-zee’.

However, he confirmed that it should be ‘Scor-sess-see’ in the fifth series of Entourage. 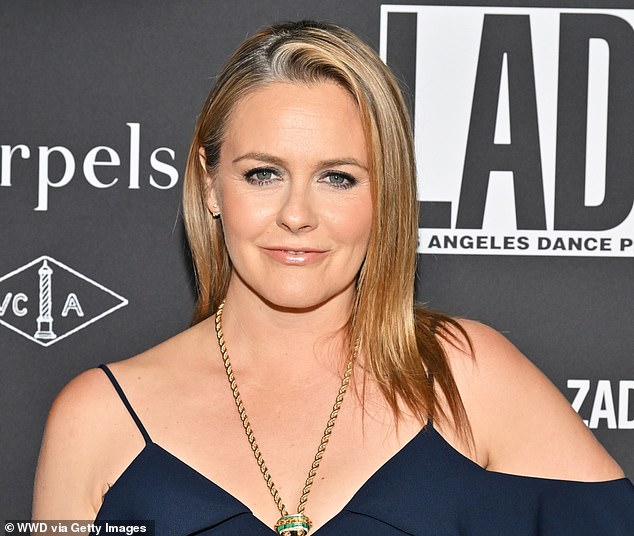 Alicia Silverstone told fans on TikTok: ‘My name is Ali-SEE-yuh… Not Alee-Sha’

Clueless star Alicia Silverstone used a TikTok challenge to help spread the word about how her name should be said by fans.

She highlighted the common mistake that has been made over the years as she stated: ‘My name is Ali-SEE-yuh… Not Alee-Sha’.

The Alex Rider actress then captioned the clip: ‘Just an FYI.’ 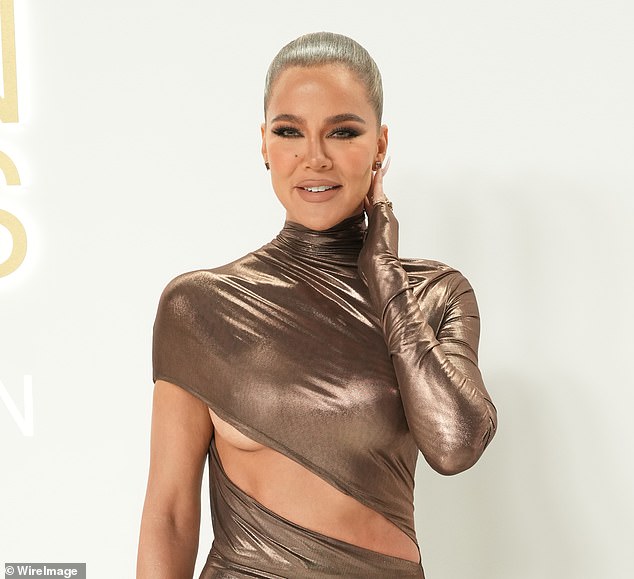 According to Andy Cohen, Khloé Kardashian’s name is ‘Khlo-Ay’

Even Khloé Kardashian was surprised to learn that there was a different way to say her name.

According to Andy Cohen, we should all be paying proper attention to the accent on the Keeping Up With The Kardashians star’s name.

He stated in an interview: ‘Yes, it’s Khlo-Ay. Khlo-Ay’s the name.’

However, the pronunciation isn’t one used by her family as he told Jimmy Fallon: ‘I walked in, I go Khlo-Ay and the other women go, “Excuse me?”

‘And Kris [Jenner] said, “Yeah, that’s actually really how it’s pronounced”. There’s a little thing on top of the name, why am I the only one that got that? I got the memo.’ 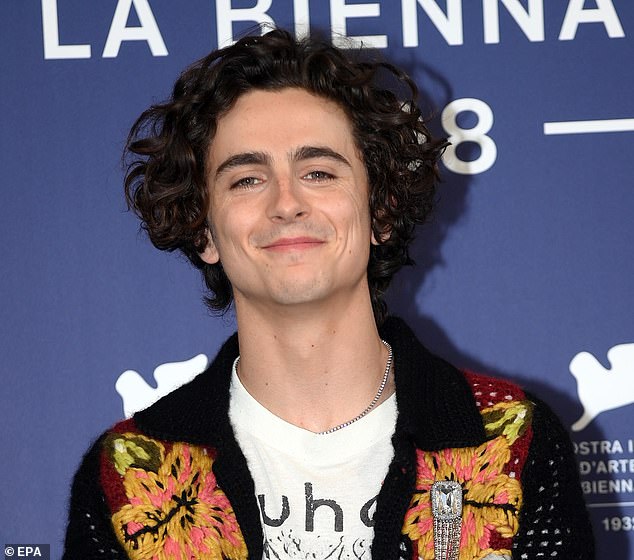 Timothée Chalamet’s name is meant to be said with French pronunciation, meaning it is ‘Timo-tay’

As one might expect, Timothée Chalamet’s name is meant to be said with French pronunciation.

Though most fans say his name like ‘Timothy’, the star has confirmed many times that it should be ‘Timo-tay’.

Speaking in an interview with Frank Ocean, the Call Me By Your Name star revealed that the actual pronunciation of his full name is ‘Timo-tay Shala-may.’

‘My dad is from France, so it’s a French spelling, but it seems like too much of an obligation to ask people to call me that,’ he explained.

In another chat, he stated: ‘I can’t ask people to call me that; it just seems really pretentious’. 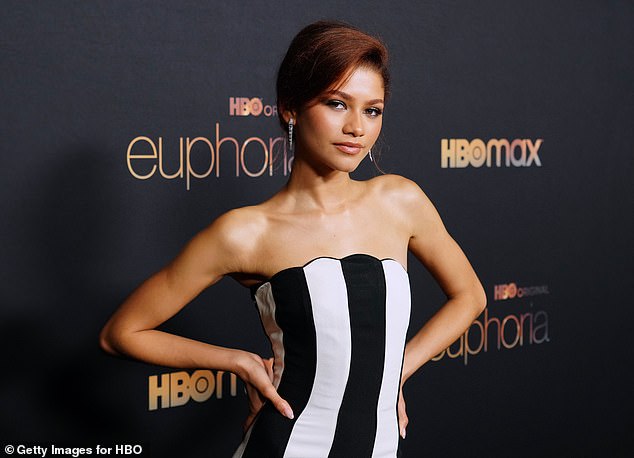 Zendaya Coleman is one of the few younger stars who have been able to drop the surname and only be addressed by a mononym.

In a YouTube video, the Euphoria actress revealed that her name is commonly mispronounced as ‘Zen-dye-uh’.

However, the correct way to say her name is ‘Zen-day-yuh’. 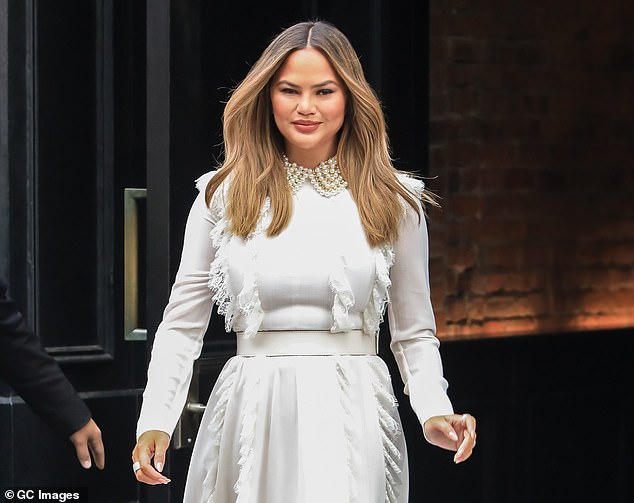 Chrissy Teigen has become a household name — but as it turns out, the name everyone is saying is wrong.

The 32-year-old star shocked her Twitter followers when she tweeted that nearly everyone mispronounces the name – which is Norwegian.

Though most people say it as ‘tee-ghan,’ the correct way to say her last name is actually ‘tie-ghen’.

The star has confirmed several times that this is how she was taught how to pronounce her name when she was growing up. 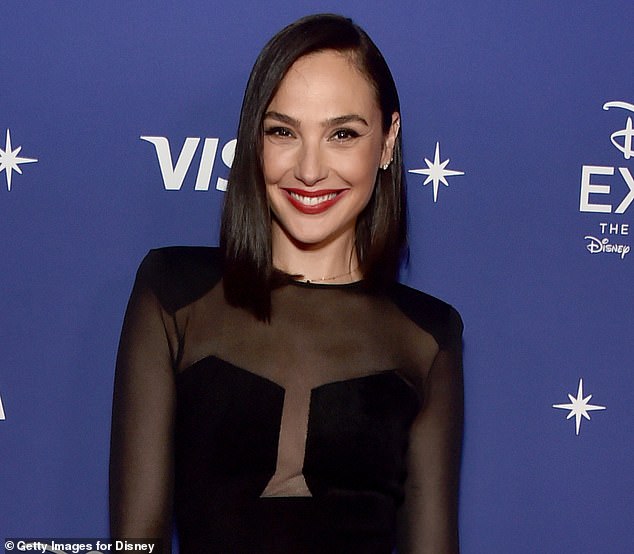 The actress has revealed several times that is should be pronounced ‘guh-dote’.

Her father is a sixth-generation Sabra (also known as a Israel-born Jew) and prior to her birth, her parents had Hebraized their surname from ‘Greenstein’ to ‘Gadot’.