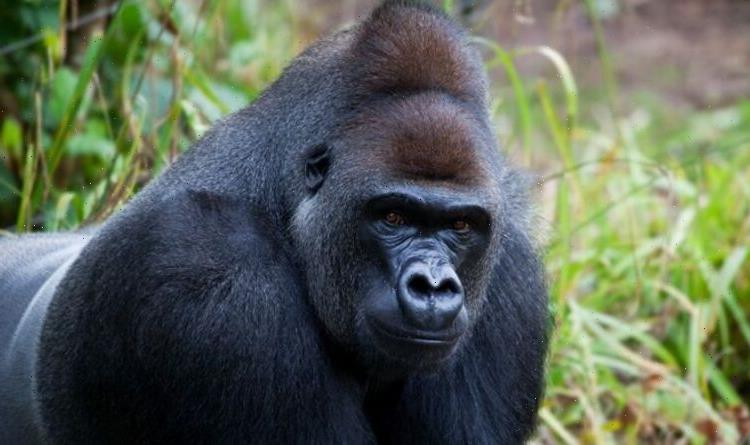 Gorilla’s INCREDIBLE reaction to being released into the wild

Chicago Zoo resident Amare is a 16-year-old gorilla, weighing in at a whopping 415 pounds. But the teenage primate has become hooked on something human teenagers are also glued to: their smartphones.

Stephen Ross, director at the Lincoln Park Zoo in Chicago, said that Amare had visibly started to enjoy the sight of photos and videos flashing up on phone screens.

Dr Ross, of the Lester E. Fisher Center for the Study and Conservation of Apes, said the zoo staff was concerned Amare was spending too much time looking at screens, not socialising with other gorillas.

He told Newsweek: “We are growing increasingly concerned that too much of his time is taken looking through people’s photos.”

He added: “We really prefer that he spend much more time with his troop mates learning to be a gorilla.”

Dr Ross commented: “I think most parents can relate to this.

“We recognize the benefits of getting out there with your friends, learning social skills, getting outside.”

The zoo has now added a barrier to the outside of Amare’s area, hoping to keep the smartphone screens further away from the gorilla.

Dr Ross said: “We’re all in it together to give Amare the best possible life.”

Amare shares his living space with three other teenager gorillas of the same age.

Dr Ross described how Amare was once distracted by a screen held by a visitor that he was caught off guard when another gorilla barelled towards him.

Dr Ross told the Chicago Sun Times: “It seemed to almost surprise Amare because his attention was very much distracted.”

A normal display of aggression between males of this age, Dr Ross said this nevertheless showed the screen fixation could alter Amare’s social skills.

DON’T MISS:
Have your say: Would YOU follow the rules if Boris enacts lockdown? [VOTE]
Putin plot to WIPE OUT Ukraine – entirely from the map [REPORT]
Covid cases mapped: Which areas have the highest number of cases? [MAP]

This could lead to “severe developmental consequences” for the young male, he added.

Dr Ross raised the possibility that this was “probably a cyclical phenomena: the more he shows interest, the more people want to engage in it”.

There was also the potential for the three other “bachelor” gorillas at the zoo to become similarly obsessed with the phone screens.

Dr Ross said: “It’s within the realm of possibility and something we really want to get ahead of.”

He added: “What we’re keeping an eye on here is that he doesn’t end up watching screens that the visitors are presenting him for hours on end.

“It’s more of a quantity issue than a quality issue.

“If we can all sort of agree that we want to do what’s best for the animals, then we can sort of resist that desire to sit there and flip through pictures for an hour with him.”