She’ll be there if you’re the toast of the town, babe.

Taylor Swift is showing support for her longtime love, Joe Alwyn. The superstar singer took to Instagram on Monday to “like” her actor beau’s post about his upcoming role in FX’s A Christmas Carol miniseries. Alwyn, who portrays Bob Cratchit, stars alongside Guy Pearce, Andy Serkis, and Charlotte Riley in the miniseries, which was executive produced by writer Steven Knight, as well as Tom Hardy, Ridley Scott, Dean Baker, David W. Zucker, and Kate Crowe.

“Hard to fill the shoes once worn by Kermit. But I tried. Tune in this Christmas,” Alwyn wrote alongside a video preview of the miniseries. “Thanks @fxnetworks @tomhardy @bbc @andyserkis @nickmurfpix and all.”

Shortly after Alwyn’s post went up on Instagram, his girlfriend of over three years hit the heart button. Clearly, she’s ready to see Alwyn’s latest performance. As Swift fans will know, she was by his side throughout award season earlier this year as he promoted his films The Favourite and Mary Queen of Scots.

In turn, Alwyn has been there to support Swift at her events throughout their relationship as well. Back in October, Alwyn was by Swift’s side as she hit the Saturday Night Live after-party. Earlier in the night, the Grammy winner took the SNL stage to perform “False God” as well as “Lover,” which is believed to be about Swift’s romance with Alwyn.

Hard to fill the shoes once worn by Kermit. But I tried. Tune in this Christmas. Thanks @fxnetworks @tomhardy @bbc @andyserkis @nickmurfpix and all.🎄🎥 🐸 👻

Hard to fill the shoes once worn by Kermit. But I tried. Tune in this Christmas. Thanks @fxnetworks @tomhardy @bbc @andyserkis @nickmurfpix and all.🎄🎥 🐸 👻

Alwyn, 28, also showed Swift, 29, love on Instagram this week, liking all three of her photos from her British Vogue cover story. 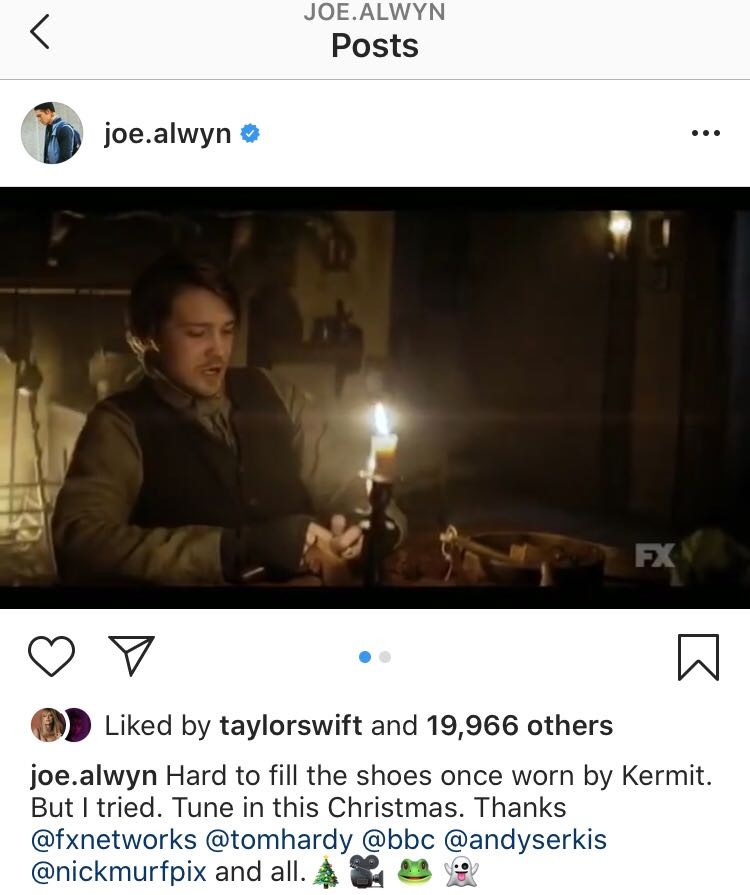 It was just days ago that the couple celebrated Thanksgiving together, with Swift traveling to London to spend the holiday with Alwyn.

“She arrived on Thursday from New York and is spending the weekend there,” a source previously told E! News.

“It’s an annual tradition for Taylor to get together with close friends and do this,” the insider shared. “Many have been at her gathering in years past. This year was intimate and casual, but they all had a great time.”

Swift will be continuing the celebrations this month, in addition to her movie Cats being released in theaters, the “Love Story” singer is set to turn 30 on Dec. 13!

Shop These Exclusive Sephora Holiday Gifts Before They Sell Out!