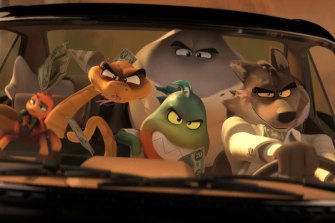 Author Aaron Blabey has more than made up for the fact he didn’t achieve commercial success until the age of 40. His Bad Guys series has sold a whopping 30 million copies around the world, and has just been adapted for the big screen by a major Hollywood studio.

It’s a dream come true for the 48-year-old Bendigo-born writer, who was about to quit when he came up with the idea.

“I went for a walk and came up with The Bad Guys, Pig the Pug and Thelma [the Unicorn] in a day. It was a very significant moment. I’ve gone for many more walks since, hoping it would happen again but it just hasn’t,” he says with a laugh. “It’s amazing what desperation will do.”

Pitched at kids aged six to 12, The Bad Guys books are a mash-up of movie concepts, Blabey says, inspired by Mad Max, anything by Tarantino, Spielberg’s movies from the 1980s, Scorsese and Ford Coppola.

“There’s all these things that you wouldn’t put a child in front of in a million years, but [I found] a story that is essentially really heart-warming … bad dudes who aren’t that at all but everybody thinks they are, and then a simple concept like don’t ‘judge a book by its cover’,” he says.

We meet at a restaurant overlooking the Yarra River in Melbourne, the city he came to as a 17-year-old, desperate to make a career on the screen. “I spent those years just wandering around willing myself into the movies,” he says.

That he soon did, landing small roles in Blue Heelers and Stingers and bigger parts in Crash Burn and The Damnation of Harvey McHugh. Even so, he despises his work as an actor.

“The projects were terrific but as a performer, being such a big fan of what people do on the screen – I love watching great actors do what they do well – whenever I look at anything I did, I am under the table, mortified.”

“I was always levitating over it, trying to … I was doing the wrong job, I couldn’t be inside it as an actor needs to be.”

After releasing seven books to what he describes as minimal success, Blabey says the later stratospheric results mean it’s been a surreal decade. The early books did receive critical acclaim, and he won a Children’s Book Council Award for Pearl Barley and Charlie Parsley, plus a NSW Premier’s Award for The Ghost of Miss Annabel Spoon. 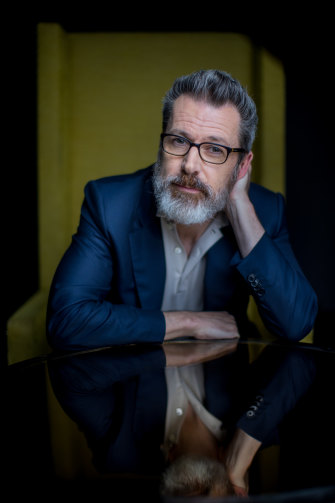 Aaron Blabey in Melbourne on the eve of his movie’s release.Credit:Simon Schluter

It was nothing compared with what was to come. That fateful walk came soon after he’d signed with a new publisher; there was a portent even before he fleshed out the ideas. “I wrote the Bad Guys concept out as a single sentence on my phone and texted it to a friend and said, what do you think of this? She came back and said ‘that sounds like a DreamWorks movie’.”

That’s precisely who made The Bad Guys movie, out this month around the country. Having spoken to all the major Hollywood studios, Blabey kept coming back to Kung Fu Panda – the sensibility DreamWorks showed with it sealed the deal.

The adaptation was pitched as Tarantino for kids. “In a funny way, that’s what he does,” says Blabey. “He takes disparate elements from cinema and mashes them together. I was a fan of the Beastie Boys, who do the same thing. They take old stuff and put it through a blender with their own sense of humour and it comes out as something new, and I love that. I feel my most playful when it’s like that, that’s when I feel most free. It’s a flat-out essential for my work.”

They say, if you’re not scared about what you’re doing, you’re probably not doing it well – I’m petrified every day.

He and wife Kirstie, a speech pathologist, and their two teenage sons live in the mountains outside Sydney, but a move to the States is on the cards as several other books are being translated to the screen.

“Thelma and the Unicorn is a full-blown animated movie musical at Netflix,” says Blabey. “I have a new book series called Cat on the Run, which is set in the same universe as The Bad Guys, but with a new main character, that is in development.” 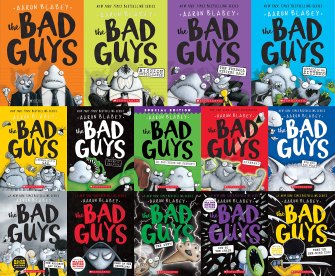 Pig the Pug is the one yet to be developed. Blabey admits he’s been holding back on it, wanting full creative control. “I think he’s a TV show, slightly older than the books. I’m not suggesting it will be Family Guy but older, which will give it more scope: the shady dealings of a shady dog.”

Melbourne is where he considers home, so seeing the movie for the first time at the Kino cinema the night before our interview was a highlight. “I found it really moving. Just hearing the warmth of the response was really great,” he says.

Not coincidentally, it’s the place he first saw Tarantino’s Reservoir Dogs, which was a revelation.

“I’ve never forgotten that night at Kino: it was raining and I was the only person in the cinema. Reservoir Dogs wasn’t successful commercially, it was only after Pulp Fiction [came out] … I just liked the poster and went in and had my mind blown – and I went back five times that week.” 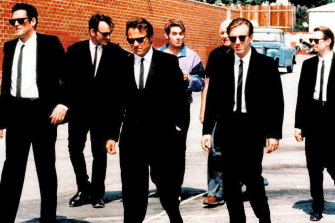 Seeing Quentin Tarantino’s Reservoir Dogs was a revelation for Blabey.

Blabey says the greatest driving factor in his life is and always has been movies, particularly American cinema, “so The Bad Guys was originally written as a love letter to that”.

The enthusiasm the author feels for his work is palpable. He works about 80 or 90 hours a week, producing three books a year. About four months is spent writing, with the rest creating the finished art. All up, there will be 20 episodes in The Bad Guys.

“There’s something fast and loose about the drawing style, coupled with this sense of humour,” Blabey says. “The one thing I do have down is this sense of dramatic story structure, which I’ve applied to the books. The rest of the stuff, I always feel like I’m right at the edge of not pulling it off.

“That thing that they say, if you’re not scared about what you’re doing, you’re probably not doing it well – I’m petrified every day that I’ll take the whole thing off the edge of a cliff. I’m just skating through it thinking, ‘I don’t know how I’m going to do this.’” 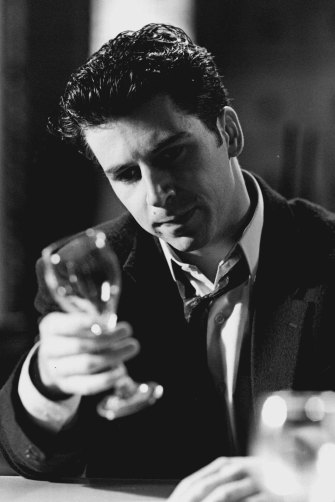 A young Blabey in the ABC’s The Damnation of Harvey McHugh.Credit:ABC

A cliff is highly unlikely, but there will be a cat named Princess Beautiful. For the record, she’s the world’s No.1 cat video star, who gets framed for something she didn’t do; her world may well collide with the characters from The Bad Guys.

Throw in a grumpy, surprisingly difficult pug, a unicorn who is really a horse with a carrot on her nose, and it’s quite the menagerie.

“The villains in Road Warrior were pretty memorable. The guy with the mohawk – the guy in Mad Max – he was pretty good. Obviously Jack Nicholson as the Joker [in Tim Burton’s Batman] … ” American actor Sam Rockwell is listing his favourite bad guys.

“I like it when the audience gets fooled, like in Alien when we found out Ian [Holm’s character Ash] was an android, so the movie fools you a little. You’re not sure if they’re a good guy or a bad guy.”

Best-known for his Oscar-winning role in Three Billboards Outside Ebbing, Missouri, Rockwell plays the main character in the adaptation of The Bad Guys. He plays the big bad wolf, who, as it turns out, is not so bad. Early in the film, there’s a lovely moment when the wolf helps an old lady; when she tells him he’s a good boy, his tail starts to wag as though it’s the first time he’s been told. 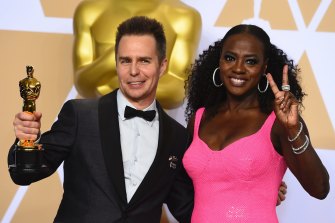 Sam Rockwell (pictured with Viola Davis) after winning the best supporting actor Oscar for his role in Three Billboards Outside Ebbing, Missouri.Credit:Jordan Strauss/Invision

“It’s a cathartic thing for the wolf character; the journey he takes is really cool. It’s funny too – it’s a real romp,” Rockwell says, adding the movie will appeal to both adults and kids.

Rockwell loved The Bad Guys book series. “They kind of remind me of the Mad Libs books, where you fill in the blanks,” he says.

One upside of voicing characters is you’re not locked into a filming schedule – it’s eminently mobile. Rockwell recorded The Bad Guys all over the world, thanks to COVID, with locations including Sydney, London, New York, at his home, and at the DreamWorks studio in Los Angeles, where he and Marc Maron [who plays Mr Snake] could record together.

Aaron Blabey’s book The Bad Guys by has been adapted for the screen by DreamWorks.Credit:DreamWorks Animation LLC

His next project couldn’t be more different. In April, he will appear on Broadway in the David Mamet play American Buffalo, alongside Laurence Fishburne and Darren Criss. It’s a Pulitzer Prize-winning show that Al Pacino and Robert Duvall have performed in. “I’ve been doing theatre since I was a kid but haven’t been on stage for seven years. It’s a lot of work but it wakes you up a little. It’s gonna be something.”

Animation is a different discipline to regular acting, Rockwell says, having voiced several characters in films such as The One and Only Ivan and Trolls World Tour. “You’re trying to find a realistic way in, an organic way in. They were very nice about letting me ad lib and improvise … you have to make it your own a little bit,” he says.

“It’s challenging. They need a lot of energy quickly – they need results quickly. I had a friend of mine, a really good actor, Michael Godere, come in to read the other parts with me when I was alone, because he could do a lot of voices. That was really helpful – he saved my ass.”