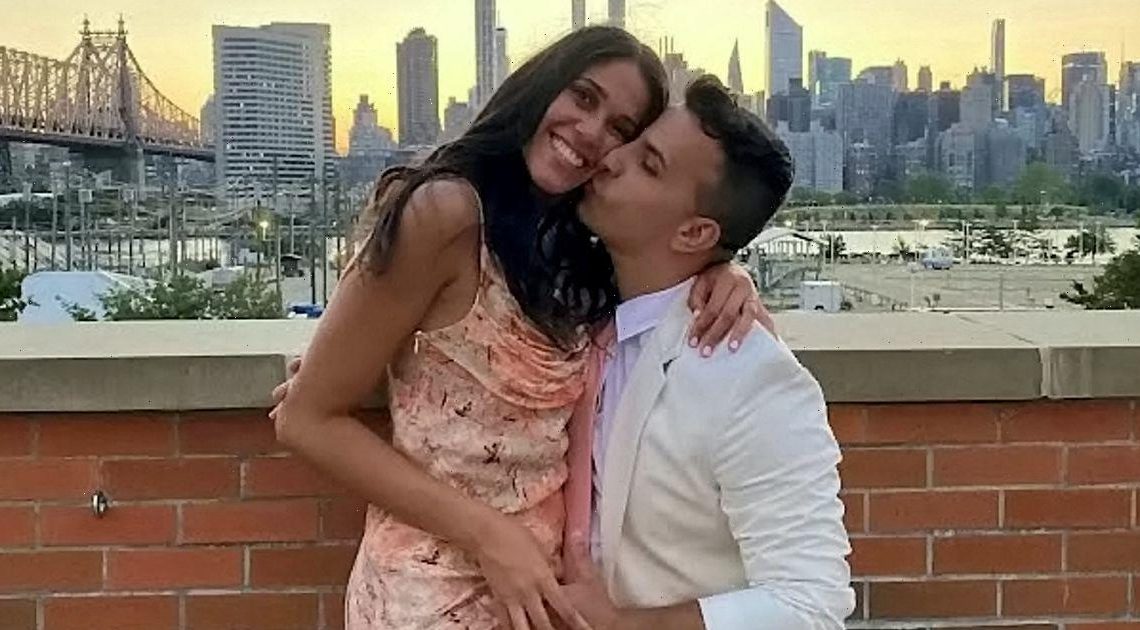 A 5ft 9in woman who towers over her fiancé says the couple are constantly "stopped in the street" due to their unusual height difference.

Sam Espinal, 24, and fiancé Stephen Di Fede, 32, don't get any issues when they're sitting down.

But when they walk around side-by-side the pair regularly get approached by people due to the fact that Sam is six inches taller than her 5ft 3ins beau.

READ MORE: 'I was single for eight years – but being on your own is better than settling'

In the past people have even congratulated Stephen for bagging such a tall lass – and the couple admit it took them time to get used to the pairing due to social expectations.

But now, they don't really notice it so have told other people not to let height difference hold them back.

Sam said: "Turning people down because of their height can result in missing out on someone who might be your dream partner".

The content creator and event planner, from Manhattan, New York, US, said: "I always thought I could never date someone shorter than me.

"The height difference did bother me a bit in the beginning. I couldn't see myself being OK with it.

"People would stop us in the street to congratulate Stephen for dating a taller woman – it felt a bit weird.

"But as I fell in love, it just went away. I just stopped thinking about it.

"Now I can see people one thousand percent miss out on relationships because they rule people out based on their height."

Stephen, who works as a content creator and dancer, said he always expected to have to date taller women.

He said, if he only stuck with shorter women, he would have been left with a very small group to choose from.

The dancer said it can even bring humour to the couple's relationship, as there will be moments when he can't reach things that are high up, but Sam will be on hand to grab them for him.

He also said they tend to ignore any negative comments they receive on social media.

Sam and Stephen met through work in October 2016, when she did an internship at the school where he worked as a teacher.

She originally thought she could never date someone shorter than her, but eventually was drawn to Stephen, and they started dating in February 2017.

The pair – who post as @stephnsammy on TikTok – became official in the following September.

At the start, Sam she told Stephen she didn't know if she could go ahead with a relationship.

But her mind eventually changed – and she explained: "When we got together it was a shock to me, and it did take a while to adjust.

"I started adjusting fairly quickly the more I started falling in love. It stopped bothering me and I stopped thinking about it.

"I was insecure wearing heels around Stephen, because I didn't want to appear even taller than him."

But Stephen said the height difference "wasn't a big deal" for him as most women are taller than him.

Now it's just the norm for the couple, who regularly post on TikTok and make jokes about the height difference to normalise it.

The pair got engaged in November 2022, and they plan to marry later this year.

Sam revealed she won't be wearing heels to the wedding, but it's nothing to do with her height.

Stephen said: "I actually love it when she wears heels. I'm like: 'Wow, damn, that's a lot of beautiful woman.'"

Sam added: "I always wanted to be barefoot at my wedding, even before I met Stephen."

They say one of their TikTok followers reached out to tell them their videos convinced her to give it a go with a guy who was shorter than her, and now they're engaged.

Stephen said: "You need physical attraction to someone, but if you like everything except their height and you rule them out, you're potentially missing something great.

"If you're automatically disqualifying people, you are limiting your potential."

Sam added: "People one thousand per cent miss out by ruling people out for their height.

"If people just put their guard down, and let themselves be attracted to someone they think they might like, it would be so much easier to find love.

"The way you connect with someone is so important – personality is what matters most."