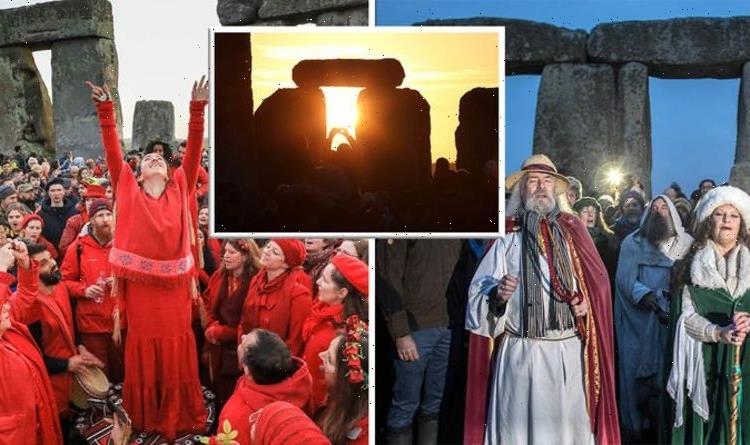 Stonehenge is renowned for its mystery stone formation which aligns perfectly with the summer sunrise and winter sunset. As the shortest day of the year dawns upon us, the unique Wiltshire monument will be transformed into the historical venue of a mass gathering to celebrate the winter solstice.

What is the winter solstice?

The shortest day of the year marks the peak at which the dark days slowly but surely become lighter.

On the date of the winter solstice, one of the Earth’s poles has its maximum tilt away from the Sun – making it the shortest and darkest day of the calendar year.

Considered to be the first day of the astronomical winter season, the solstice marks the middle of winter as the countdown to spring begins.

This unique celebration has been observed by groups dating back to the Celtic druids to present-day ‘neo-pagans’.

Prehistoric interpretations of the winter solstice have linked religious and spiritual celebrations to the symbolic death and rebirth of the sun, though the event is also closely associated with pagan holiday of ‘Yule’ – the 12 days of Christmas.

Who celebrates the winter solstice?

For thousands of years, the winter solstice has been celebrated by a number of civilisations and cultures but its modern audience is frequented by pagans.

Stonehenge has been a significant spot for this religious group which recognise the winter solstice as a deeply meaningful solar event.

It is thought that as many as 10,000 people gather at the historic heritage site each year to mark the occasion.

Though the original purpose of Stonehenge remains unclear, English Heritage suggests that marking this yearly cycle may have been one of the reasons that Neolithic people constructed the stone circle.

According to English Heritage: “The stones were shaped and set up to frame at least two important events in the annual solar cycle – the midwinter sunset at the winter solstice and the midsummer sunrise at the summer solstice.”

Pagan and Druid groups are known to gather at the Heritage site four times a year for the two solstice and two equinox which take place in:

On these key dates these spiritual and religious groups congregate to perform historic ceremonies as an ode to the changing seasons, the sun and the sky.

DON’T MISS:
When is the winter solstice this year? [LATEST]
Stonehenge theory places rocks as temple base: ‘Unquestionably right’ [ANALYSIS]
Winter solstice 2021: When is it and how to celebrate in UK [INSIGHT]

How is the winter solstice celebrated?

Midwinter feasts have been linked to the solstice based on the discovery of mass discards of pig and cattle bones in the nearby Durrington Walls site, which is just a couple of miles away from Stonehenge.

This multi-faith event is commemorated with choral songs sung by people dressed in red historical clothing as a nod to their ancestors.

Percussion performances are performed in the first hours of light following the winter solstice.

Barefoot dancing, physical contact with the stone circle and individual or group performances by Pagans, Druids and revellers are all common celebrations of this solar event.

As the sun rises for the first time after this astronomical event, celebrations at Stonehenge offer on-lookers a chance to embrace the symbolic rebirth of the sun.

The winter solstice is celebrated around the globe and many historical traditions are a common part of modern Christmas celebrations. Including: