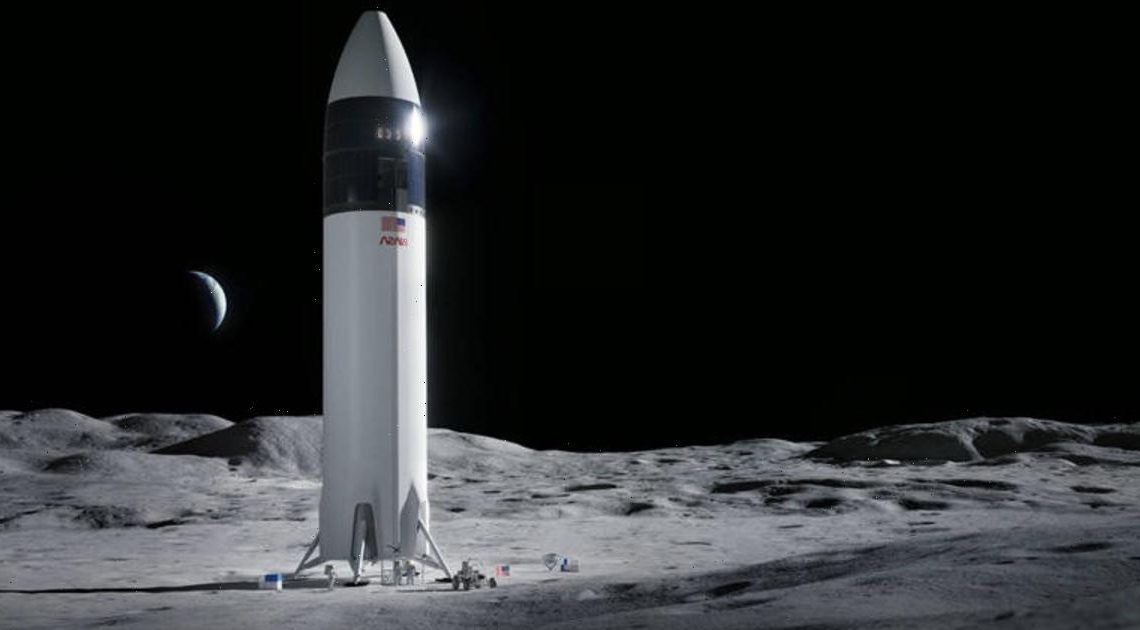 While few details were immediately available, the contract will cover one unpiloted test flight from lunar orbit down to the surface and back again and one piloted flight carrying two astronauts launched to the moon in a Lockheed Martin Orion capsule atop NASA’s Space Launch System heavy lift rocket.

Once in lunar orbit, the astronauts will transfer to the SpaceX lander and descend to the surface for a weeklong stay near the moon’s south pole, where permanently shadowed craters may harbor reservoirs of ice that might one day be converted into rocket fuel, air and water.

Subsequent competitions are planned to procure additional landers and the services needed to support sustained operations on the moon. 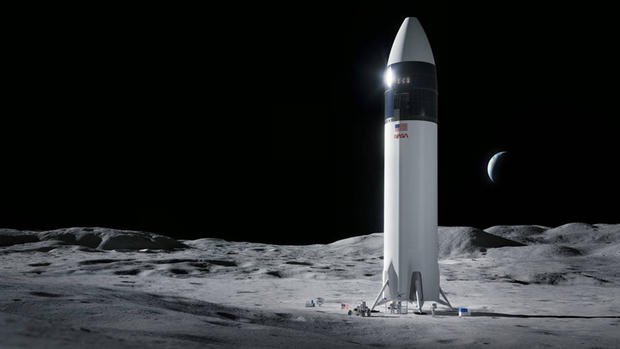 The SpaceX design is based on technology the company is developing for its planned Starship heavy-lift rocket, a two-stage oxygen-and-methane burning super booster. The lander looks similar to prototype Starship upper stages currently being built and tested at SpaceX’s Boca Chica, Texas, manufacturing facility.

“I’m very excited, and we are all very excited to announce that we have awarded SpaceX (a contract) to continue the development of our integrated human landing system,” said Lisa Watson-Morgan, Human Landing System program manager at NASA’s Marshall Space Flight Center.

“The SpaceX Starship is a fully reusable launch and landing system designed for travel to the moon and other future destinations,” she said. “It’s a single-stage crewed landing system. It utilizes Earth orbit refueling of liquid oxygen and liquid methane propellants. The system leans on the company’s tested Raptor engines, flight heritage of the Falcon and Dragon vehicles.”

She said the Starship lunar lander will include “a spacious cabin and two airlocks with a great deal of space for our crew, as well as additional payload capability. That will permit us to take experiments to the moon, and return samples back and do all the important science that we want to do on this mission.”

“As the first human lunar lander in 50 years, this innovative human landing system will be a hallmark in space exploration history,” Watson-Morgan told reporters during an afternoon teleconference. “And we’re going to help to write that history.”

She said a landing in 2024, a target imposed by the Trump administration, is still possible in theory, depending on out-year funding and test results. But the Biden administration, while supportive of Artemis, has not yet indicated what sort of schedule it might favor, which translates directly into funding requirements.

Agency managers originally hoped to award follow-on HLS contracts to two of the companies to encourage competition and protect against the possibility of major problems or delays that might affect one company but not the other.

But Congress only allocated $850 million in NASA’s fiscal 2021 budget for lander development, about one quarter of the amount the agency said it needed to have a new vehicle ready by 2024.

Given the available money and projected future spending, NASA “down selected” to a single contractor — SpaceX — deciding the California rocket builder offered the most attractive combination of cost, technology and management expertise.

“We determined the best way forward for us was to select SpaceX for option A, and then to move forward and accelerate the landing services procurement,” said acting NASA Administrator Steve Jurczyk. “We’ll be reaching out to all of industry to get input on how to best move forward on landing services procurement, which will enable awards for HLS contracts for landers subsequent (to) the first demo landing with SpaceX.”

SpaceX did not participate in the briefing. Former Senator Bill Nelson, a Florida Democrat nominated by President Biden to serve as NASA’s next administrator, faces confirmation hearings next week and has not yet weighed in on the HLS contract award.

But the announcement marked another major milestone for SpaceX, which is playing an increasingly critical role in the nation’s civilian and military space programs.

The company has shaken up the launch industry, undercutting the competition with Falcon 9 rockets starting at just $60 million, tens of millions less than other rockets in its class, and perfecting technology to recover the first stage boosters so they can be refurbished and flown again.

SpaceX also holds a $2.6 billion NASA contract to build and launch piloted Crew Dragon capsules ferrying astronauts to and from the lab complex. The third piloted Crew Dragon mission is scheduled for launch to the International Space Station on Thursday.

The company has been developing the Starship system on its own, but the NASA contract announced Friday is expected to accelerate and expand that testing.

The lunar lander will be the first developed in the United States since the Apollo program 50 years ago. It’s not yet clear what the SpaceX lander eventually will cost to build and fly — but for comparison, a Planetary Society analysis concluded NASA spent $23 billion in inflation-adjusted dollars to build the Apollo landers like the one that carried Neil Armstrong and Buzz Aldrin to the moon in 1969.

Prince Philip's Funeral: Who's Standing in Between Harry & William?
Entertainment