Sharing the gift of silence

The invention of 2020 is called the Yammer Jammer. It’s the must-have accessory of the modern city office worker, available in three ready-to-wear colours: Southern Cross grey, Collins Street black and Gertrude Street shiny. While it won’t allow you to teleport (the Flux Capacitor is still in development) it will allow you to move through space with greater ease and satisfaction. The YJ, for short, is a small device that fits on the lapel of your business shirt, T-shirt or relevant urban attire. In short, it allows you to interrupt all of the electrical and radio signals within a two-metre radius of your person. That roadblock of a guy standing right in the middle of the train door during peak hour, with headphones large enough for a US Army infiltration of the Middle East. The one who won’t move, despite your increasingly loud requests of “Excuse me! I need to get off!” No problem. Activate the YJ and after a five-second interruption in his listening pleasure of thrash metal, he will hear you and step aside, allowing you to slide by without injuring any body parts. 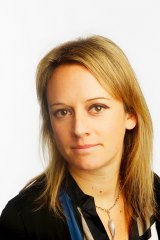 So too that woman on the corner of Spring Street, who’s so focused on her next online purchase that she steps, oblivious, into the path of a fast-approaching taxi, deaf to its horn due to the lethal combination of headphones and the adrenalin rush of an impending bargain. Press that button; you too can save a life!

Then there’s that lady in your favourite coffee shop: you can’t tell if she’s standing in queue or she’s already ordered because each time you ask, she nods. Are in you in queue? Bored nod. Have you ordered? Dismissive nod. You could pause to contemplate the strenuous effort required to remove an earphone for long enough to hear a stranger’s polite query. But by then you’d realise her coffee is cold; it’s been waiting on the counter for five minutes because she can’t hear her name being called.

Then there’s the old school friend who hunts you down for a cross-town catch-up and then spends your time together texting a new Tinder flame and uploading food photos to Instagram. Use that button! One press and it’s disconnected. Listen to that sound: silence. Isn’t it marvellous? I am here. You are here. Two people listening to the world – potentially even to each other. Hi. How are you today?