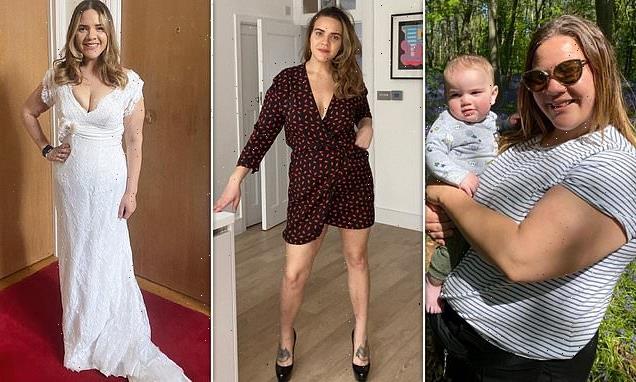 Secret eater who would binge on 3,000 calories a day and lie to her husband so they could order takeaway unveils 6st weight loss after surgery to reduce the size of her stomach

A mum who would secretly binge on over 3,000 calories a day and then tell her husband that she hadn’t eaten so that they could order takeaway for dinner has gone to lose an impressive six stone after undergoing weight loss surgery.

Alexandra Atheinitou, 32, from London, who tipped the scales at 17st 6lb at her heaviest but now weighs 11st 10lb and is a slim size 10, had no control over her eating growing up – and would tuck into food when she was bored, tired, stressed out or happy.

But working in the city of London, executive assistant Alexandra would secretly eat over 3,000 calories per day – grabbing a croissant and coffee on her way into work, before then tucking into a second croissant or a muffin provided by her company. 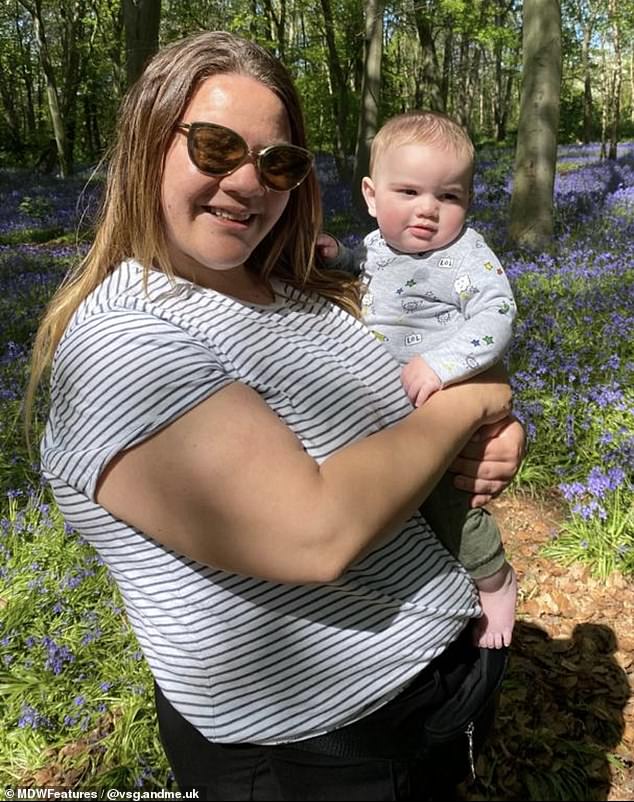 Alexandra Atheinitou, 32, from London, would secretly binge on over 3,000 calories a day and then tell her husband that she hadn’t eaten so that they could order takeaway for dinner. Pictured, with her son Byron at her heaviest weight, 17st 6lb 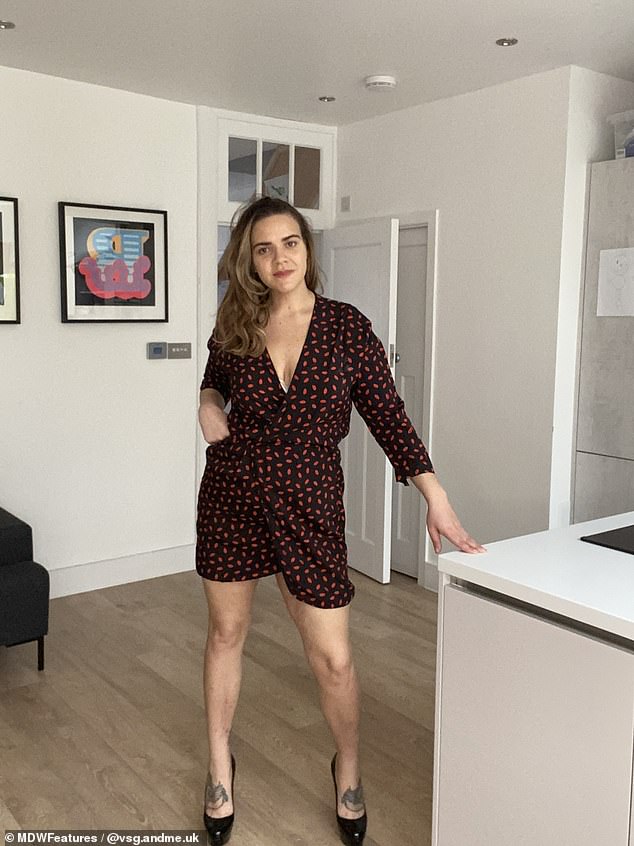 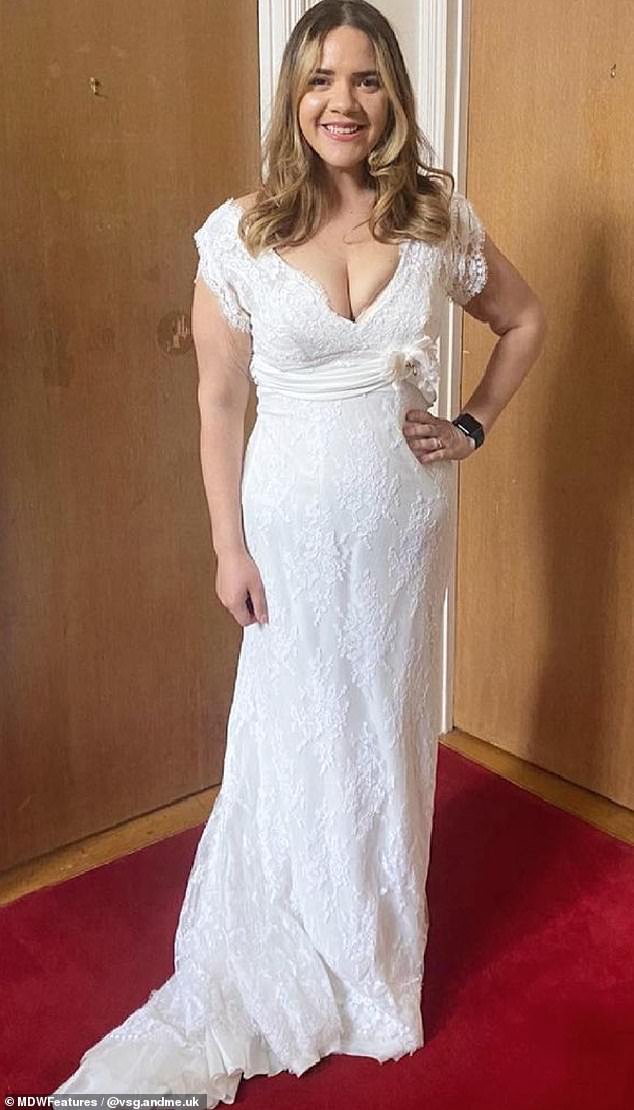 Seven years after the big day, Alexandra can once again fit in her size ten wedding dress (pictured)

At mid-morning she would snack on her break, before heading out for a sandwich and more snacks for lunch.

Returning home, Alexandra would ‘lie’ to Michael that she hadn’t eaten much during the day and the couple would order a takeaway, with Indian being their favourite.

‘I was a secret eater,’ she explained. ‘I used to work in the city and eat multiple breakfasts and snacks throughout the day.

‘When I arrived home, I would tell Michael I hadn’t eaten much and ask if we could get a takeaway. I was lying to him and lying to myself about how much I was eating.

But it was in the school playground whilst waiting to pick up her kids that Alexandra noticed that her weight was becoming an issue.

Weighing 17st 6lb and sporting a UK size 22 dress, she quickly realised that she was not only the youngest mum, but also the heaviest too and felt out of place. Alexandra was often mistaken for being her children’s nanny.

Alexandra would avoid playing games on the floor with her kids out of fear that she would have to suffer the embarrassment of struggling to get back to her feet with other parents watching and judging.

Knowing that kids can be cruel, Alexandra knew that she had to lose weight fast to avoid being labelled as ‘the fat mum’ in the school playground.

In August 2020, Alexandra first met with a doctor to discuss the possibility of weight loss surgery and she was booked in for surgery on October 24, 2020. 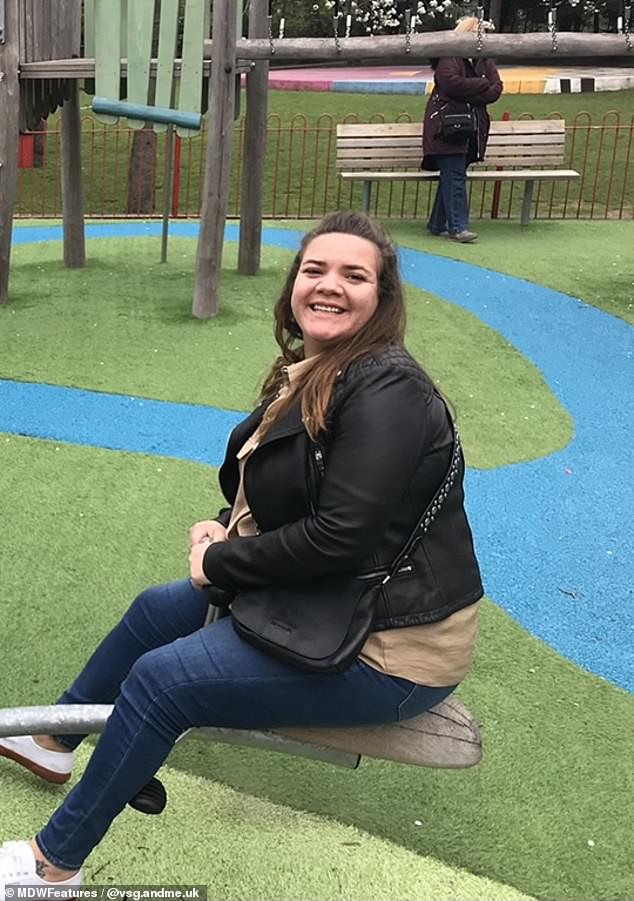 At her heaviest, Alexandra, who would secretly binge over 3,000 calories a day, weighed well over seventeen stone (pictured) 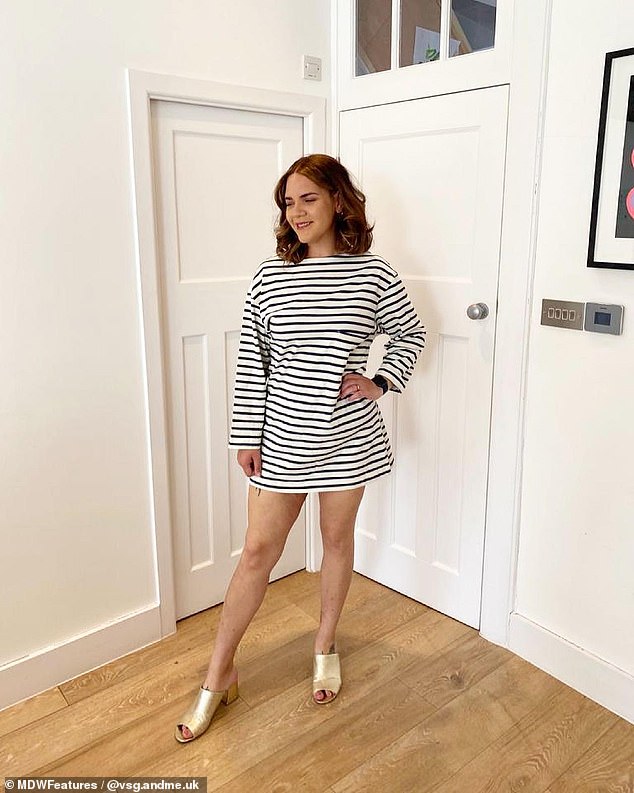 Alexandra says that since having her surgery in October 2020, she feels like a ‘new person.’ Pictured, Alexandra looks amazing in her slim size 10 dress

Knowing that kids can be cruel, Alexandra knew that she had to lose weight fast to avoid being labelled as ‘the fat mum’ in the school playground. Pictured, left before and right, after

The vertical surgical surgery which reduced the size of her stomach to suppress her appetite was a success and in the six months since her operation, Alexandra has lost 5st 10lb and weighs just 11st 10lb. She now fits into a slim size 10 dress.

Alexandra’s weight loss has completely changed her life and she now loves herself like never before and seven years later, she is even able to fit into her size 10 wedding dress once again.

The 32-year-old is on a mission to dispel the stigma that exists around weight loss surgery, since some detractors view it as a way to ‘cheat’ your way to weight loss.

According to Alexandra, surgery has facilitated her weight loss, but she still must put in the hard work to lose weight and most importantly keep it off.

Her favourite comments are from those who call her an inspiration and tell her that she has encouraged them to lose weight to become a better version of themselves. 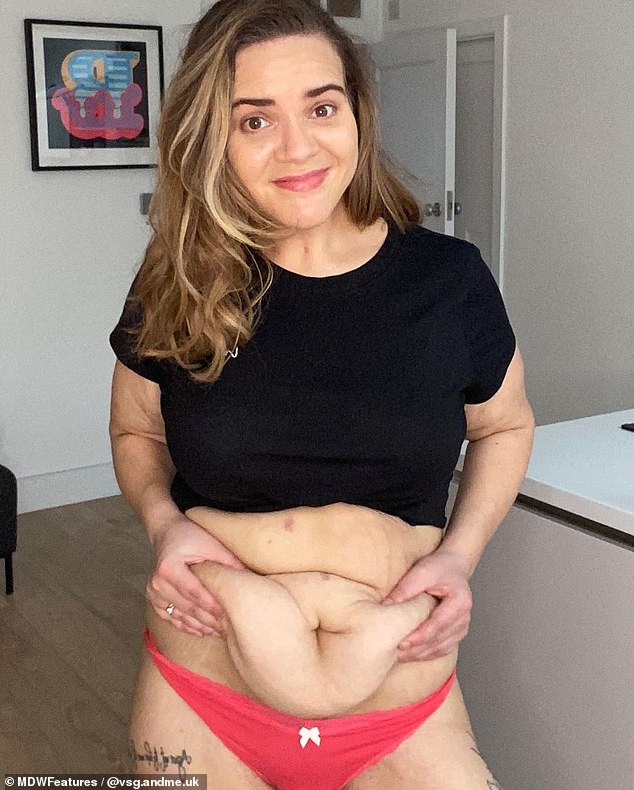 Alexandra has lost almost six stone in just six months since her surgery, but has been left with folds of loose skin (pictured)

Alexandra has dropped from a size 22 at her heaviest to size 10 today. Pictured left, before and right, after 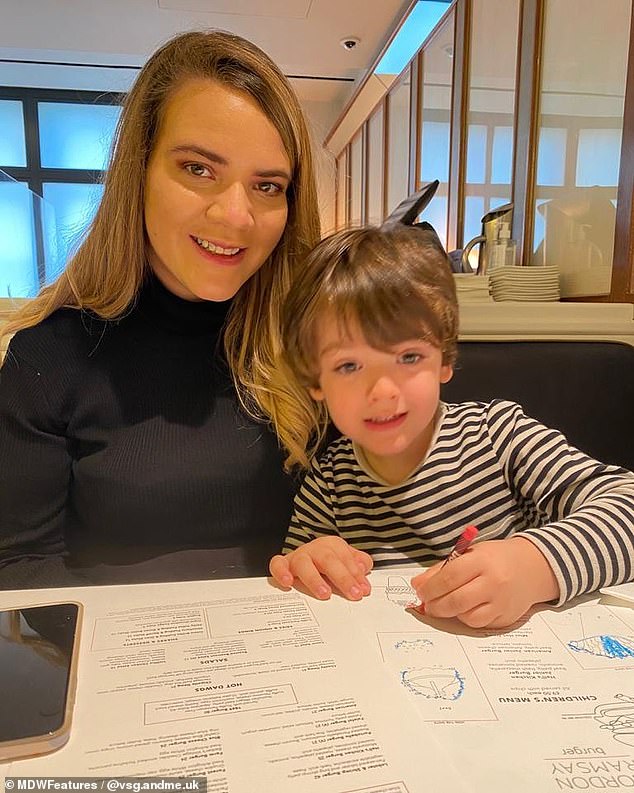 Alexandra is on a mission to dispel the stigma that exists around weight loss surgery, since some detractors view it as a way to ‘cheat’ your way to weight loss. Pictured, with her son Byron

Yet despite these positives, Alexandra is self-conscious about the loose skin she has developed as a result of her extreme weight loss and had even had a troll online say that showing off her skin is disgusting.

She plans to have surgery on her arms, thighs, stomach and breasts to remove the excess skin.

‘I really loved food. There is no other way to put it,’ said Alexandra. ‘I simply had no off button. It was my go-to for everything – if I was bored, tired or stressed or even happy, I would turn to food.

‘With my family being West Indian, food is also a big part of the culture, especially to celebrate. I would also save up my pocket money and always spend it on sweets and snacks.

‘Fortunately I never had self-esteem issues growing up and was always part of the popular group despite my weight, but I was also happy to be the butt of the joke a lot of the time.

She added: ‘When I went on girls’ holidays I would be the first to strip off at the beach, so that side of things was never a problem. 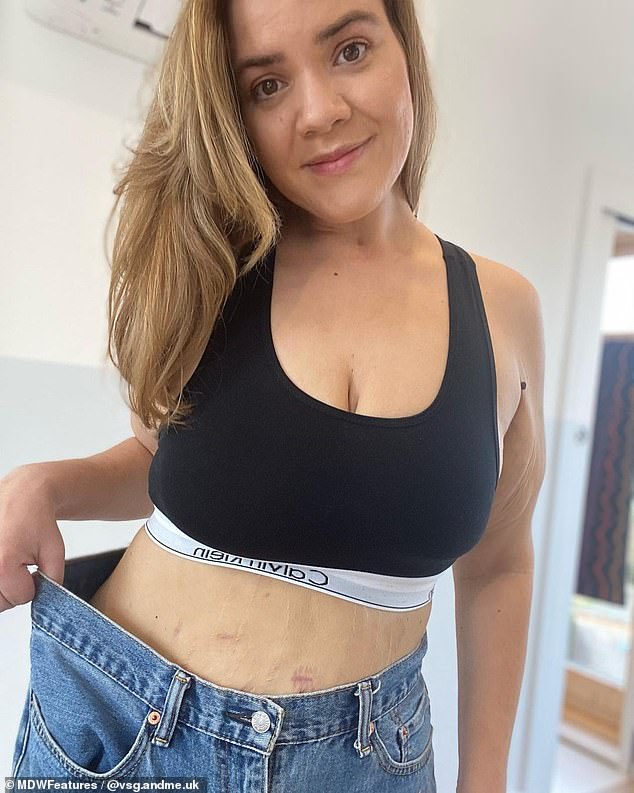 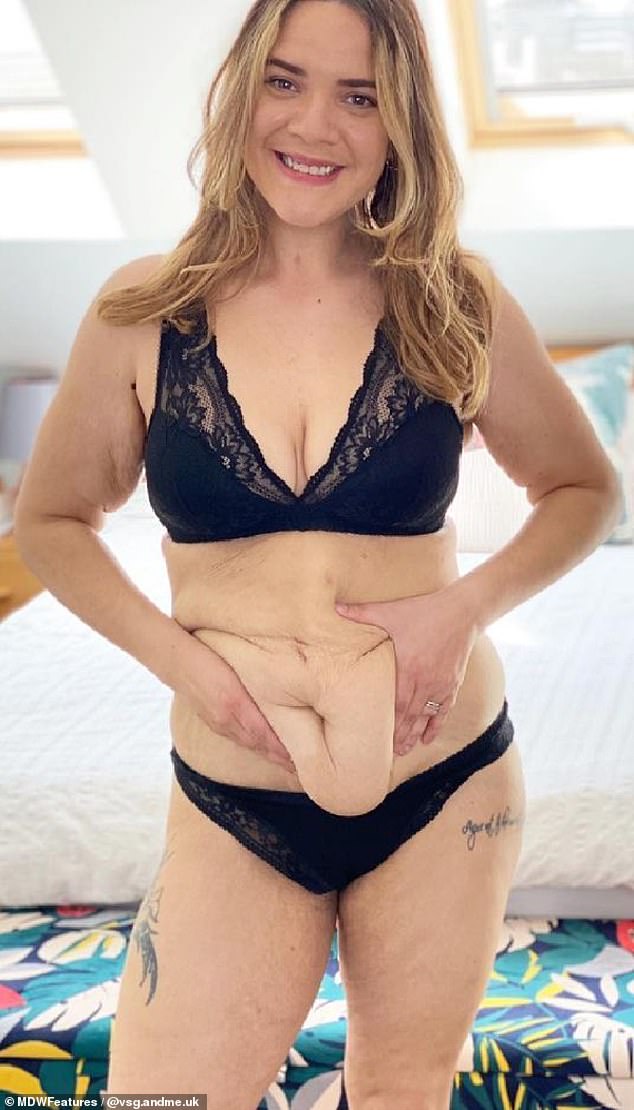 Alexandra plans to have surgery on her stomach, under her arms and on her thighs to remove the loose skin (pictured)

‘When my kids got older and my eldest started school, I soon realised that I was the biggest person in the playground.

‘I wouldn’t want to join in with the kids’ games because I wasn’t sure how long it would take me to struggle up off the floor and that was embarrassing.

‘My turning point for surgery was knowing that with it I would be able to live a normal life and at the age my children are they wouldn’t know any different.

‘Kids at school can be cruel and I certainly didn’t want to be known as the fat mum. That was my main motivation for losing weight.

‘I asked about getting my surgery on the NHS, but I had a BMI of thirty-nine and you have to have a BMI of forty to have it on the NHS.

‘There was no way I was purposely going to gain weight in order to be eligible for the surgery, so I went private.’

Alexandra went on to say that since having her surgery in October 2020, she feels like a ‘new person.’

‘It sounds silly but I genuinely love myself again and I’m more confident than I’ve been in years,’ she said.

‘I truly feel like myself again. I love running now and do high intensity interval training and bodyweight exercises.

‘I’ve had people that I know walk past me and not recognise me at all. I’ve literally had to convince people that I’m not somebody else which is hilarious. 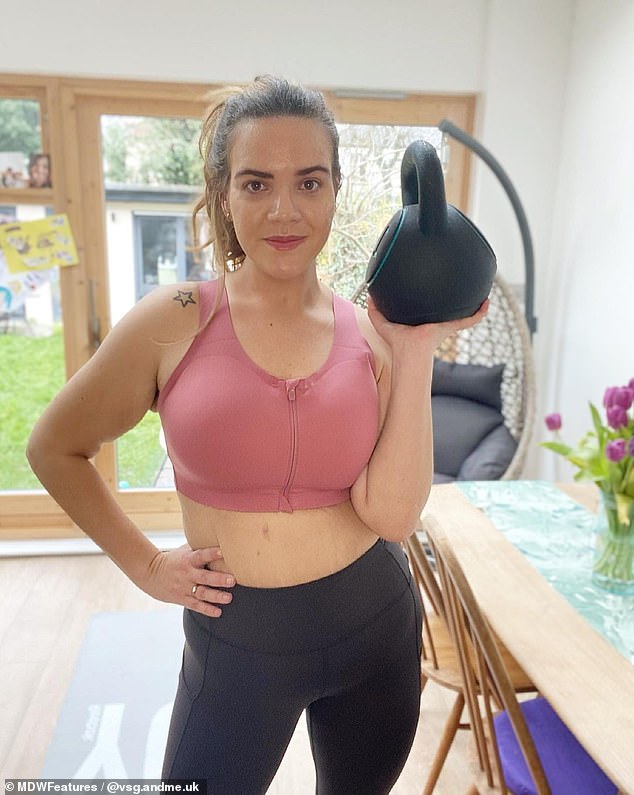 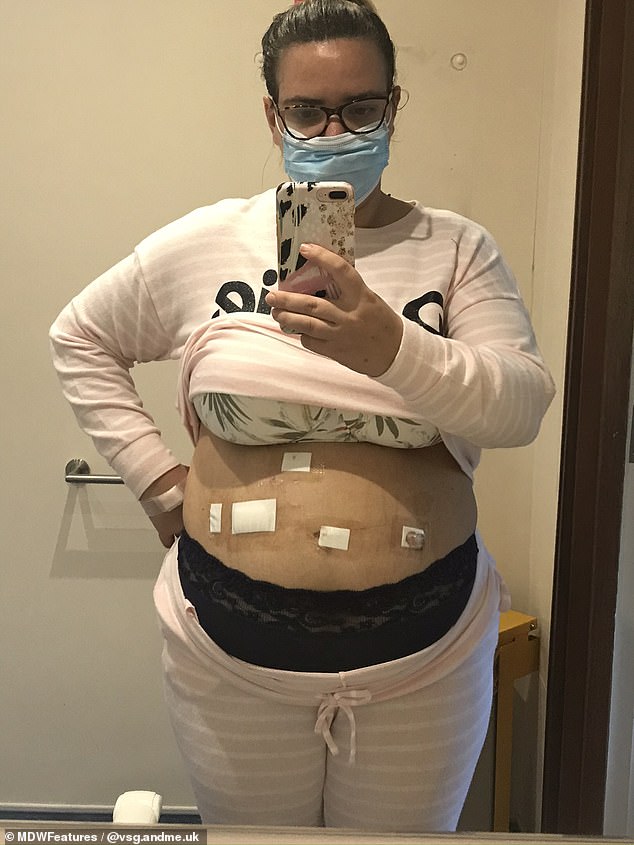 ‘The best comments I have received are from people who message me saying that I have inspired them to lose weight.

‘Those types of comments mean so much more to me than people just saying that I look good.

‘My loose skin has been my only problem, but I knew it would be before having surgery.

‘I have a consultation in July to discuss having an arm lift, thigh lift, tummy tuck and breast lift to reduce the amount of loose skin I have.

‘I am going to look like a patchwork doll.’

Before losing weight, Alexandra ate multiple croissants for breakfast, sandwiches and snacks for lunch and takeaways for dinner totalling over 3,000 calories. 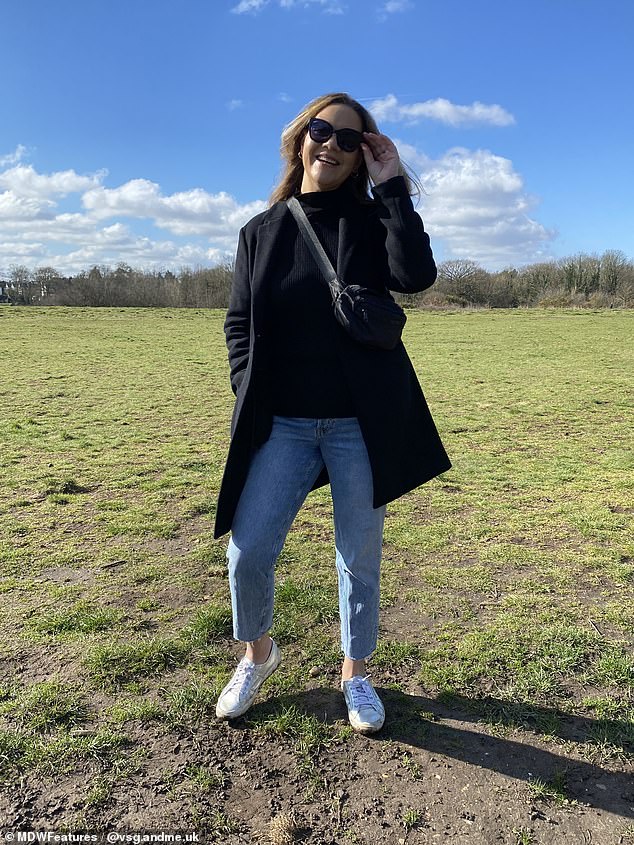 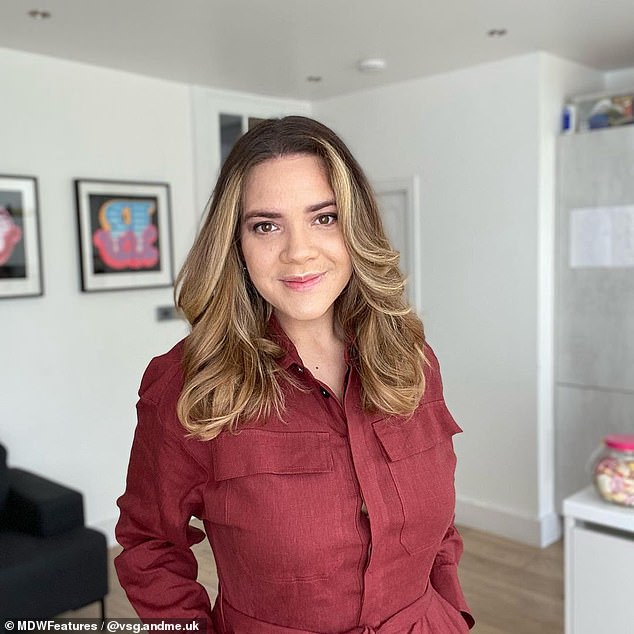 Alexandra (pictured, now) used to secret eat and lie about how much she had eaten at work so that she could order takeaway

Since her surgery, Alexandra has a protein shake or yoghurt for breakfast, followed by a chicken or seafood salad for lunch and typically a small portion of fajitas or curry for dinner, totalling roughly 1,000 calories.

Whilst eager to help others who want to learn how to lose weight, Alexandra is ultimately hoping for a time when her weight loss doesn’t define her.

‘If I can make people feel better about themselves, that’s more important to me than feeling good about myself,’ said Alexandra.

‘I’ve had women tell me that they’ve shown my before and after pictures to their husbands to convince them of the change that is possible.

‘But secretly I will love it when people don’t talk about my weight loss and I can just be me.’