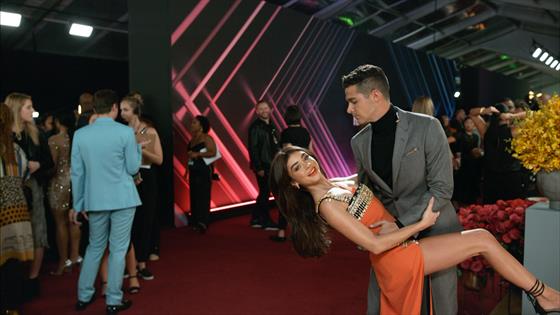 Sarah Hyland and Bachelor Nation’s Wells Adams are the latest pair to undergo the viral TikTok couple’s challenge and she jokes that they are “the very poor man’s” Jennifer Lopez and Alex Rodriguez.

The 29-year-old Modern Family actress posted on her Instagram page a video of her fiancé, 35, testing their knowledge about each other and their more than 2-year romance, while closing their eyes. A similar game is often played at wedding showers and engagement parties.

“Who initiated the first kiss?” another woman’s voice is heard asking.

Both Hyland and Adams point at him.

The two also agreed he is “the funny one,” the “more romantic” one, “the better cook” and the one who’s “grumpier in the morning.” Hyland was deemed “more stubborn” and “the messy one,” as well as the person who took longer to get ready in the morning.

J.Lo, 50, and A-Rod, 44, had undergone the Tiktok couple’s challenge earlier this week. The two have been engaged for more than a year and have been in a relationship for more than three.

Hyland and Adams have been in a relationship since late 2017 and got engaged last summer.

In October, they celebrated with their loved ones at an engagement party.