Rone has long been fascinated by the urban legend of the ballroom at Flinders Street, often wondering if it even existed and whether he could create work there. “It has always been on my list,” he says.

That ambition is about to come true, as the 42-year-old Geelong-born artist opens his biggest work yet. With Time, he is about to take over not only the storied ballroom but the entire third level of the iconic Melbourne station. 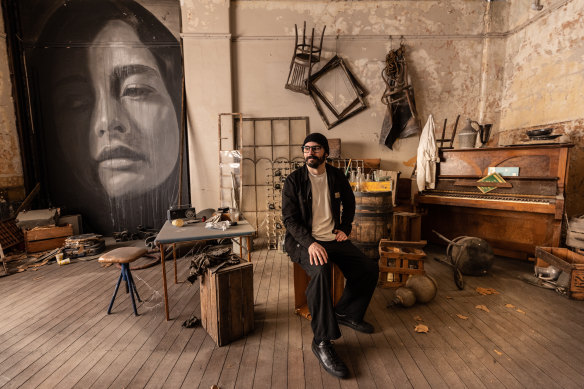 Rone is the moniker of street artist Tyrone Wright, who describes the transformation as “an architectural intervention”. Much more than art on the walls, it is an imagined reality of a world gone by, a glimpse of what might have been.

“‘I’ll meet you under the clocks’, there’s a nod to that in everything,” he says. “There’s something about this building and time. The clock tower [at the station] was how all the train drivers would set their watches: they would go out to all the regions, this is the space that set time for all Victoria. It’s quite beautiful to know it rings out from here.”

Three years in the making, Time is a love letter to mid-century Melbourne. “One of the things I really work with is that whole thing of beauty and decay. If it looks fragile, you can appreciate it more because you know it’s not going to last, this heightened sense of beauty because it’s so delicate,” he says. 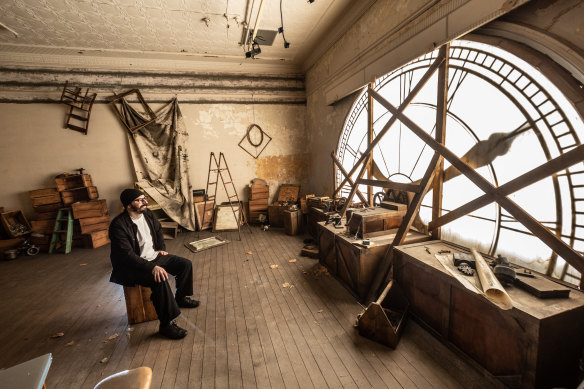 “There’s something about this building and time,” says artist Rone, upstairs at Flinders Street Station.Credit:Jason South

Wright hopes people experience a shift in time when they visit. Playing with morning and afternoon light, he says, one room might feel like a different time of the day to what it is outside, but it might also take a visitor back 50 years in time. “I like the idea that what I do is a response to the architecture. I make the building part of my artwork, you can’t tell where the building starts and my work finishes.”

The artist’s last major large-scale work was Empire, a derelict Art Deco mansion at Burnham Beeches made over in 2019; it attracted an estimated 25,000 visitors. While it told imagined stories of the upper classes, this latest shines a light on the working class of post-WWII Melbourne.

That timeframe was inspired by his grandmother, who used to work in the famous fashion strip Flinders Lane as a seamstress. “I started looking at that and other administration jobs, that influenced what would fit in this building,” he says, adding it is not meant to be historically correct. “I want it to be fantastical.”

“That’s one of the reasons I don’t paint celebrities: people can see what I’ve done wrong.”

Across the station’s third floor, themed rooms will be filled with original and recreated period objects, lighting and sound design. Spaces will include typing pools, machine rooms and public libraries of mid-1900s Melbourne, with Rone’s haunting signature female portraits hovering above each scene. 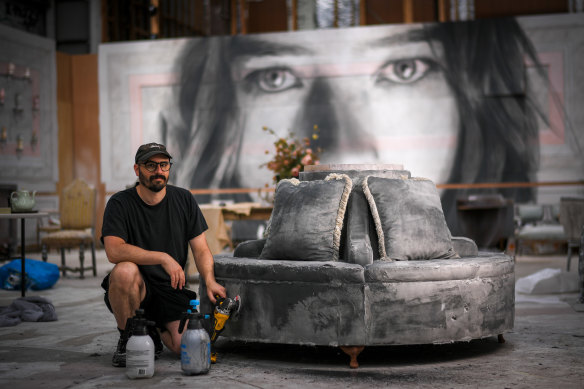 Teresa Oman, who the artist has worked with for years, is the model. “She’s almost like an emotional representation in these spaces,” Wright says. “She’s a bit of a classic beauty in a sense. I’m definitely going for something universal, I get a lot of comments saying ‘It looks like my sister, my grandmother’ … If you met her in person would say I totally painted her wrong. She has this chameleon sense.″⁣

Several longtime collaborators helped create the world Rone envisaged for Time. Set dresser Carly Spooner collected period pieces from op shops, garage sales and Gumtree to create the detail in the various rooms: the type of desk, typewriters and so on. Callum Preston led the team of set builders who crafted the many structures and replica furniture featured, while composer Nick Batterham works on the very complicated soundscape. “We learnt lessons from previous shows,” says Wright. “If you do a soundtrack across 10 rooms no one can hear it all at the same time but music does bleed from room to room.”

Access to the station has been limited, so much of the planning has been done digitally. Restrictions as a result of its heritage-listing proved challenging; anything over two metres long had to be created as modular units. Rone and his team have had access to the site since July, and about 120 people have worked on the installation, with a core team of between five and 10. The project was financed in part by the government’s Rise funding, through which Wright received $1.86 million. 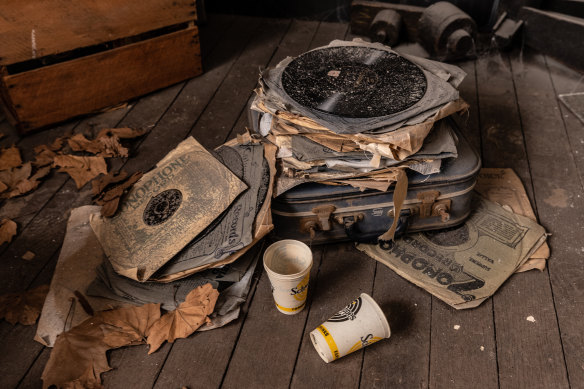 A general view of the new exhibition by artist Rone upstairs at Flinders Street Station.Credit:Jason South

“It’s taking shape; all I can see is what isn’t done.”

“It’s 90 per cent planning, there’s so much planning that goes into everything … This is my art practice now, I still do canvas commissions and bits and pieces but I have said no to almost everything in past years,” Wright says. “As a traditional painter it’s been really exciting to work in other dimensions, to realise I can be expressive by placing a sewing machine in a room, some trinkets on the floor.″⁣

A chance meeting with then state planning minister Richard Wynne at Empire was a part catalyst to this work: Wright was asked where he’d like to work next and he said the station would be his ideal. “It was a total pipe dream. I kept hassling people, I roped in Visit Victoria, they got very excited about it, they roped in the Melbourne International Arts Festival … it was meant to open before Patricia [Piccinini]’s show …”

Then, of course, the pandemic hit: “It was one of those clusterf— COVID things”.

About 50 visitors will be allowed in at a time. “I’m really excited to let people in and they will have their own stories when they come … those stories are really beautiful to hear,” he says, adding that memories evoked or stories conjured in the space were one of the most wonderful aspects of Empire.

Despite the fact he grew up in Geelong, Wright did not watch the grand final on the weekend. “Geelong will probably disown me for saying that!” he says, with a laugh. The main game for him is bringing to fruition a project his teenage self could only dream of, all those years ago when he wondered if the Flinders Street Ballroom really existed.