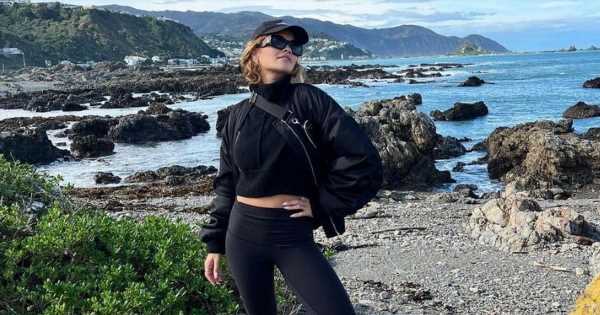 Rita Ora has shared several photos of her latest trip to New Zealand, sparking rumours she is currently on her honeymoon with her reported new husband Taika Waititi.

The 31 year old is speculated to have had a ‘secret wedding’ with film director Taika, 47, earlier this month, which was seemingly confirmed recently by Rita’s friend and celeb hairstylist James Brown in a congratulatory Instagram message.

Rita has since posted pictures from New Zealand, where rumoured husband Taika is from, showing the pair walking the coastline together while taking in the sights — leaving fans pondering if the couple are indeed on their honeymoon.

The star captioned: “The last couple of days I was so in the moment and now I'm BACK! Stay tuned!"

Another photo showed a lavish al fresco meal being enjoyed at a restaurant and a shot from inside a recording studio, suggesting Rita was back at work on her music during the recent break away.

A clip added showcased the plush pad Rita was staying at in New Zealand,with Taika, and was revealed to have towering tiled ceilings and a wide open lounge space with wooden flooring and a fireplace going.

The Hot Right Now singer has yet to confirm any truth to the rumours that she has married her partner Taika.

Speculation began of their ‘secret’ wedding, after Taika was seen in a photo posted to Instagram Stories rocking a band on his wedding finger. Rita reposted the photo with a caption covering Taika’s finger at the time.

The pair are thought to have started their relationship last year and it seems their romance has turned serious very quickly after mere months together.

In snaps taken during a recent Paris trip, Rita appeared to reveal her own ring on her wedding finger.

She captioned: “Moments I forgot to share from over the weekend and some from Paris I loved and completely forgot to post! Have a good week everyone.”

The pair are claimed to have married in a “special” intimate ceremony in London weeks ago, after reportedly getting engaged in October 2021.

A source told The Sun: "It was a really intimate ceremony and super special for everyone there. Their nearest and dearest can see how madly in love they are.

“Despite living in the spotlight, Rita is determined to keep the relationship as private as possible and didn’t want to make a big song and dance about the wedding."