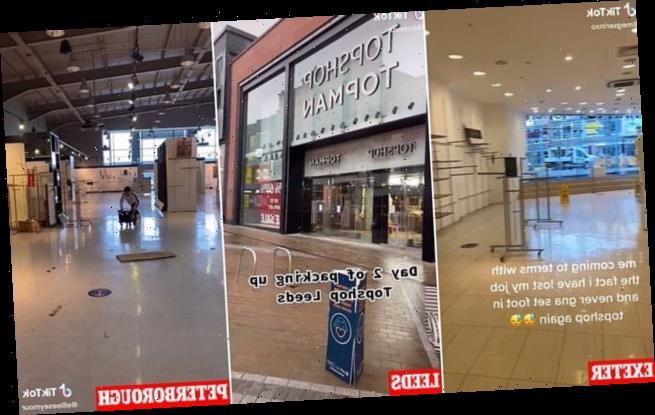 ‘The end of an era!’ Topshop employees share videos of empty shop floors and boxes of unsold stock as they shutter doors for the final time after brand was snapped up by ASOS

Once a jewel in the crown of the British high street, it is the end of an era for Topshop as employees shutter stores across the country one last time.

Staff have taken to TikTok over the last week to document their final days working for the retailer, with videos of empty stock rooms, piles of hangers and boxes of unsold stock making their way onto the app.

Several revealed they have been made redundant and have yet to find another job. The videos have sparked thousands of comments from shoppers who said it is ‘such a sad day for the British high street’ and is like the ‘death of an icon’.

ASOS announced at the start of the month it had agreed to buy the Topshop, Topman, Miss Selfridge and HIIT brands in a £330million deal following the collapse of Sir Philip Green’s Arcadia empire.

Scroll down for more videos 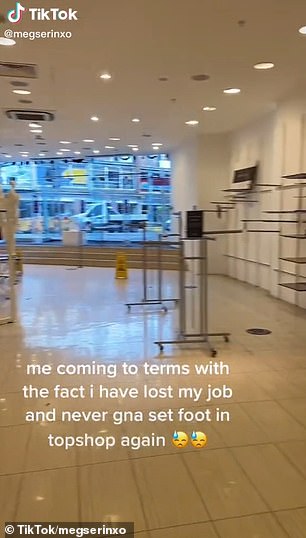 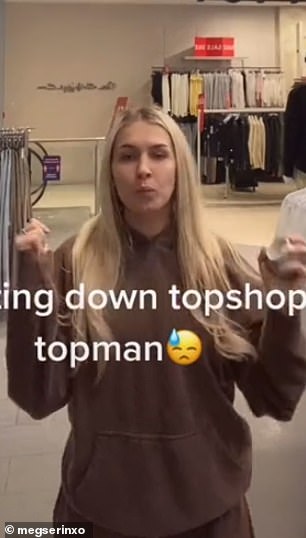 EXETER: TikTok user Megan shared a series of videos capturing her final time at the Exeter branch of Topshop (left and right). She is one of a number of employees who have shared their experience online after Topshop was snapped up by online retailer ASOS

The deal did not include any stores, forcing administrators to announce another 70 closures and 2,500 redundancies.

Frustrated staff, many of them who appear to be in their teens and early 20s, have taken to TikTok to share their disappointment at losing their jobs with the retailer.

Ellie Seymour, who worked at Topshop in the Outfit store in Peterborough’s Brotherhood shopping park, wrote: ‘RIP to our beloved Topshop,’ alongside a video showing her packing up the store alongside her colleagues.

Meanwhile Kirsty Mead, who worked at the Topshop in Leeds, said it was ‘a sad day’ as she arrived at the shop to help close up. She added: ‘Sending love to all my Topshoppers out there’.

Many of the videos are light-hearted, capturing employees air kissing mannequins, posing on displays or zooming across empty shop floors on wooden trolleys.

Others were able to take pieces of the store home, with changing room mirrors, foot stools and even light fixtures all finding their way into the hands of one thrifty employee. 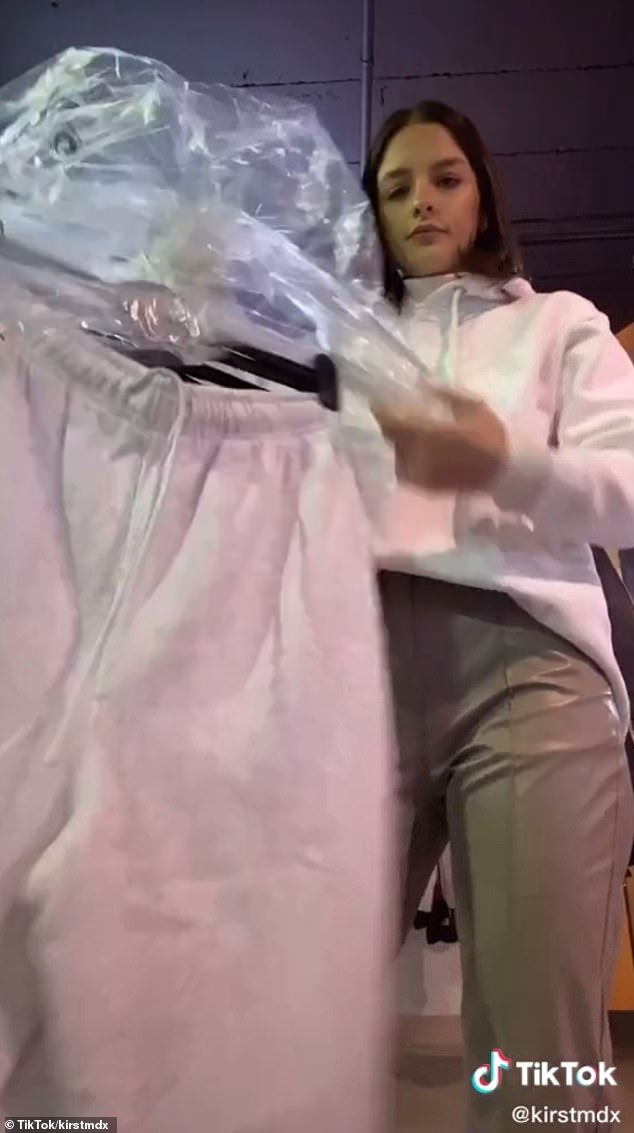 LEEDS: Kirsty Mead, who worked at the Topshop in Leeds, said it was ‘a sad day’ as she arrived at the shop to help close up. She added: ‘Sending love to all my Topshoppers out there’ 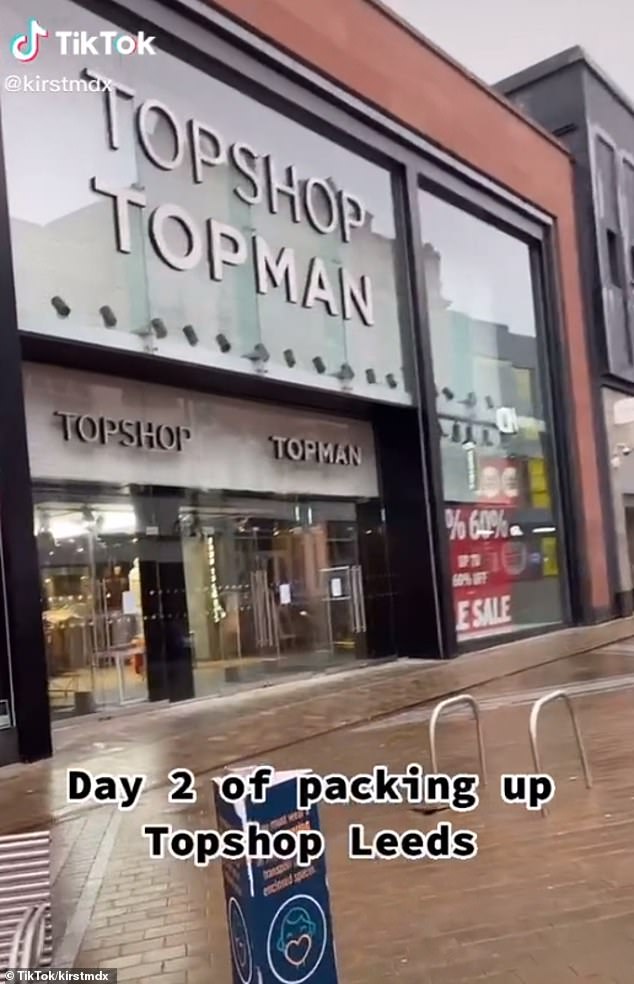 LEEDS: It took staff several days to close the store in Leeds, pictured

Several revealed they are now ‘unemployed’ and have not yet found another job.

The videos were met with messages of support by shoppers and current and former Arcadia employees.

Topshop staff were left furious last week when they found out they had lost their jobs over social media.

Asos announced the deal to save the Topshop, Topman and Miss Selfridge brands at 7am on 1 February, and by 7.45am the online retailer sent out a tweet welcoming Topshop and Topman to ‘the Asos family’.

But it took Deloitte until 9am to inform around 2,500 staff at 70 remaining Topshop, Topman and Miss Selfridge stores that they would not be part of the acquisition. 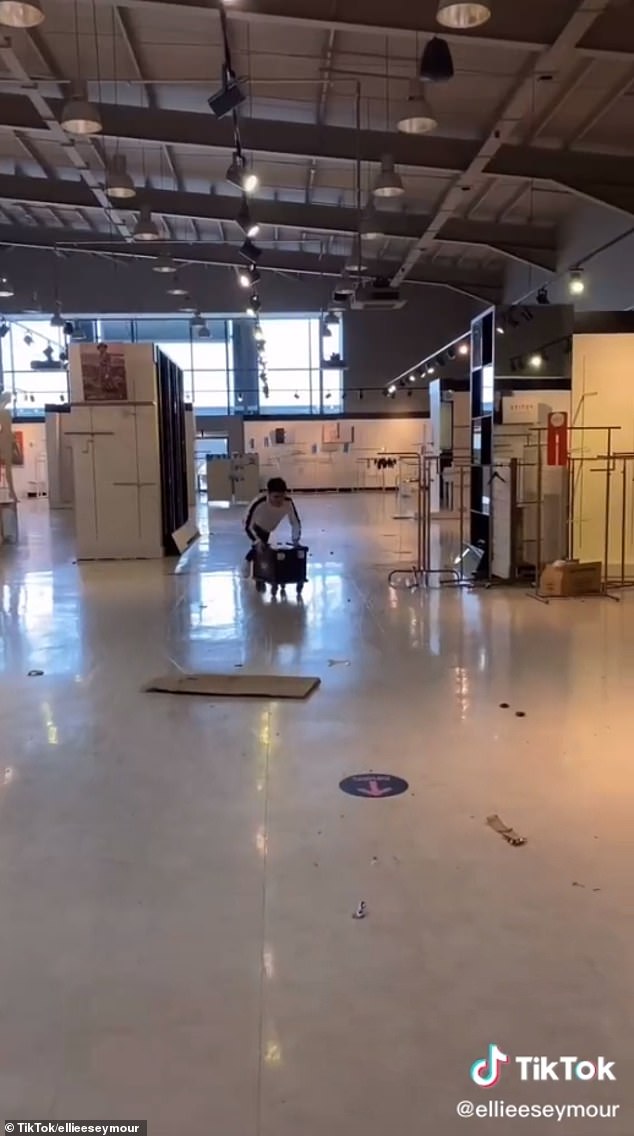 PETERBOROUGH: Ellie Seymour, who worked at Topshop in the Outfit store in Peterborough’s Brotherhood shopping park, wrote: ‘RIP to our beloved Topshop,’ alongside a video showing her packing up the store alongside her colleagues, pictured 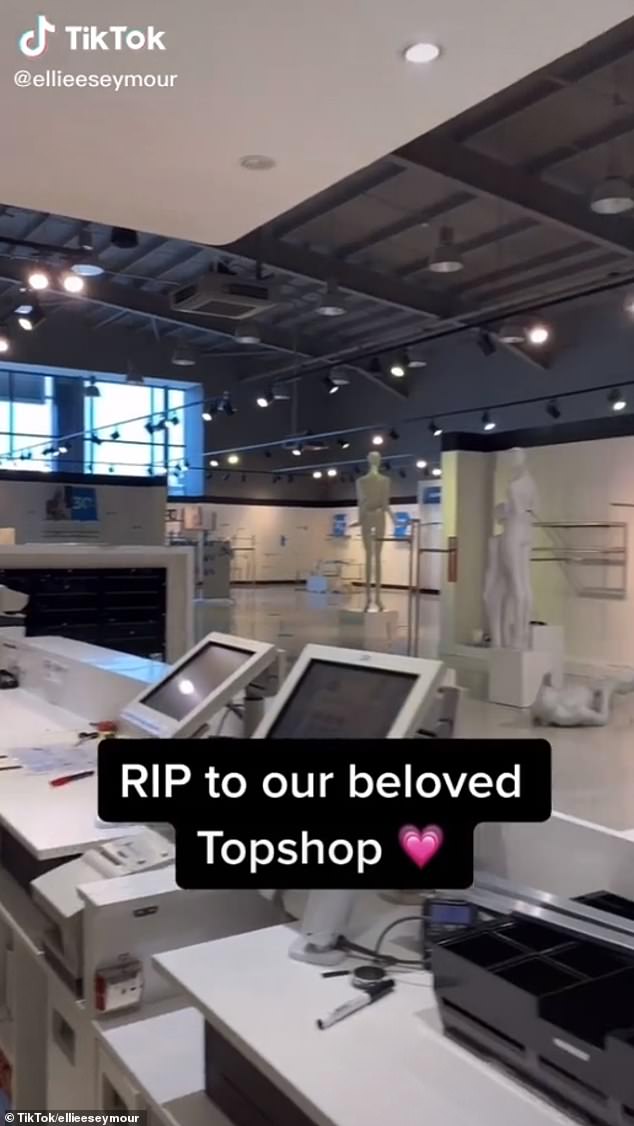 Empty: Ellie’s video showed the shop floor empty after the clothes rails were packed away

Administrators later confirmed that only about 300 jobs would be saved as part of the deal.

It is understood that these staff are highly likely to be made redundant, although some workers could be retained for a short period to process remaining stock, which has been bought by Asos, and send from stores.

Boohoo bought the inventory and online businesses of the Arcadia brands – Dorothy Perkins, Wallis and Burton.

The deal did not include the brands´ 214 remaining UK shops, which will close, and around 2,450 employees were told Monday that their jobs have been axed.