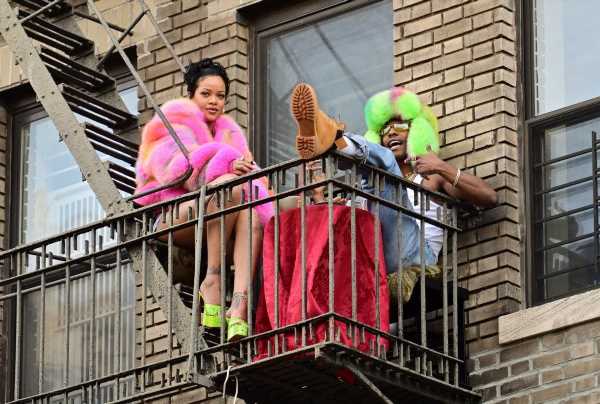 Rihanna Filmed a Music Video This Weekend, So Is New Music Coming? Unlike the “g” in “lasagna,” Rihanna is not necessarily one to move in silence. The singer spent the weekend out in the streets of New York City filming what seemed very much like a new music video alongside her current flame A$AP Rocky. So is the return to music she’s been gently teasing for a while now imminent? Somehow we’re still not 100 percent sure. She does, however, look fantastic.

Ri was spotted up in the Bronx filming something alongside Rocky in multiple outfits. Although the sourcing isn’t ironclad, by all accounts that something was a music video. The singer was spotted in four looks throughout filming, though half of them were semi-obscured in robes. The first was a full-length leather and shearling coat, with baggy brown pants, a snakeskin bustier top, and matching heels underneath. Next, she was spotted in a grey robe which seemed to cover up some sort of neon pink and orange outfit. On Sunday, she was seen on a fire escape alongside Rocky in a brightly colored faux-fur jacket straight from Virgil Abloh’s Louis Vuitton menswear runway. Finally, she was back in a robe, but this time a fire-red mini-dress appeared to be the treasure hidden behind the terrycloth.

Rihanna’s vocals have not graced a song since her guest spots on DJ Khaled’s “Wild Thoughts” and Kendrick Lamar’s “Loyalty” were released within days of each other back in 2017. The singer, however, took to her Instagram comment section earlier this year to tease that she may jump on a track soon. (“Just one,” she clarified at the time.) She’s also been spotted in New York recently, in the vicinity of recording studios alongside Rocky. The easy bet, here, is that she’s recorded something with her new man. But who knows for sure? It’s entirely possible she’s just starring in the video without having actually provided a musical contribution. When you’re in love, you’ll do the darndest things for your partner.

Still, it’s a bit surprising—though not entirely shocking—that she’d film what may be evidence of a long-awaited return to music in broad daylight. Pop stars like Beyoncé and Lorde have primed their fans to expect new musical eras to drop as something of a surprise bomb after a period of enforced mystery. No one, for example, caught paparazzi pictures of Lorde sauntering around the beach in that yellow number she wore in “Solar Power.” Rihanna, however, has never quite moved in such mysterious ways. For the early part of her career, one era bled directly into the next as the singer was releasing albums at a clip of almost once a year, and she was also eager to provide guest vocals for others. So it tracks that she’d be so casual about her return to the spotlight.