Home » Lifestyle » Richard Littlejohn: Britannia is teetering on the brink of anarchy… Richard Littlejohn: Britannia is teetering on the brink of anarchy…

RICHARD LITTLEJOHN: Britannia is teetering on the brink of anarchy… in the face of a national emergency, we are consumed by a preposterous squabble about statues of long-dead white men with links to the slave trade

A policeman grapples with a black suspect on an East London pavement. Instead of rushing to the copper’s aid, passers-by attack him.

When a female officer intervenes, she is kicked and punched.

After putting the boot in, another man poses theatrically for a selfie, grinning as the policeman struggles on the floor.

The incident was captured on a mobile phone camera and must have been viewed a million times yesterday. 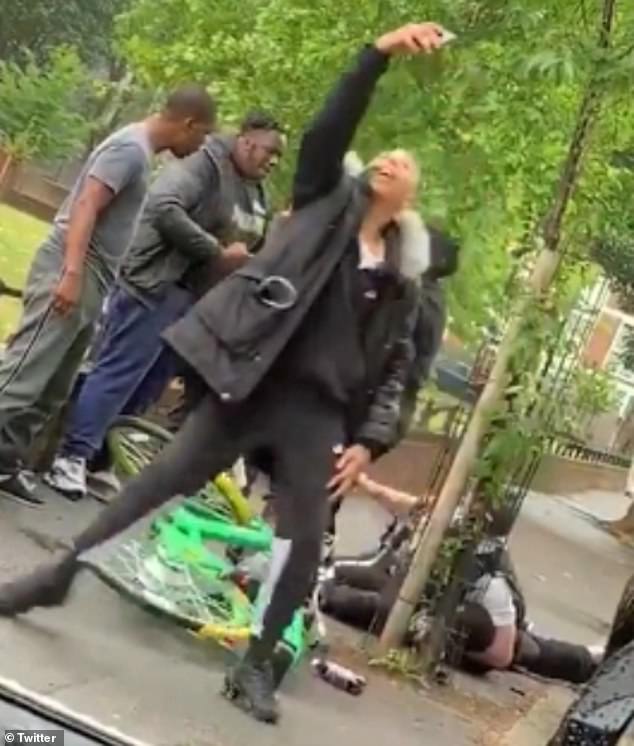 Be fair, not all the passers-by attacked the brave young cop. Some of them just stood there filming it, as you do when someone is getting their head kicked in.

And the Met don’t want to be accused of racism, do they?

Shortly before the appalling assault in Hackney, the head of counter-terrorism Neil Basu issued a hand-wringing, self-indulgent personal statement — through the Yard’s official press office — condemning the death of George Floyd in Minneapolis and bemoaning the ‘racial bias built into the very fabric of our society’ here in Britain.

Basu refers to Floyd throughout as ‘George’, as if he knew the man personally. Look how much I care, he’s saying.

He appears to think the Black Lives Matter demo which ended in violence outside Downing Street on Sunday was an unalloyed triumph for progressive policing and hails ‘restraint, dignity and empathy’ shown by the officers on the frontline.

Basu praises those officers who ‘took the knee’ in solidarity with the protesters, despite Met Commissioner Dick of Dock Green stating earlier that it shouldn’t happen on duty.

At no stage does he mention the 49 coppers injured, or the mounted policewoman hospitalised with broken ribs, a broken collarbone and a collapsed lung.

So is it any wonder that some of the more violent elements in society are no longer scared of the police, as illustrated horribly by the incident in Hackney?

That’s another one I don’t know whether to file under Mind How You Go or You Couldn’t Make It Up.

Pughsley looked as daft as the po-faced Labour leader Max Headroom and his lemon-sucking deputy Angela Rayner taking the knee in their Westminster office.

What was that supposed to achieve? Rayner was wearing a short skirt and a pair of those ugly, knee-high bovver boots favoured by the Scottish singer K.T. Tunstall. She looked as if she’d come straight from doing the Skinhead Moon Stomp at Wigan Casino.

Everywhere, madness is in the air. For the past couple of weeks, there’s been an End Of Days atmosphere abroad. As the columnist John Junor, late of this parish, used to ask: Who’s in charge of the clattering train?

We appear not to have a Government worth the name. Boris has lost the plot completely since his near-death experience from Covid-19. 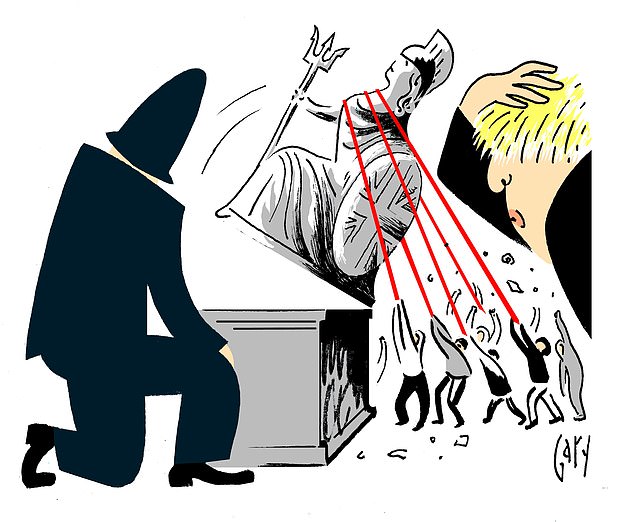 Amid the coronavirus pandemic and Black Lives Matters protests (pictured left in the cartoon), Richar Littlejohn believes Boris Johnson ( right) has lost the plot since he returned from illness

You’d never think that six short months ago we elected a Conservative Government with an 80-seat majority. It feels as if we’re living in a Left-wing dictatorship.

In the face of the greatest national emergency since World War II, the nation is consumed by a preposterous squabble about statues of long-dead white men with links to the slave trade, however tenuous.

Mobs roam the country committing criminal damage while police stand back and let them get on with it.

He may be blithely incapable of doing anything about the real black lives being lost in their hundreds on the streets of London to knife crime.

But, by golly, to appease Black Lives Matter he’s going to be tough on statues and tough on the causes of statues. Other Labour councils across Britain are doing the same.

Ministers have abrogated all responsibility. They seem happy to be, as the saying goes, in office but not in power.

Priti Flamingo appears to be the only one with any balls right now — and even she caved in to the ‘experts’ over the catastrophic plan to quarantine airline passengers for 14 days.

Unelected scientists are in charge of coronavirus, dictating policy to nervous ministers concerned only with covering their own backsides in advance of the inevitable public inquiry.

All our institutions are run by Left-wing placemen — and not just the senior ranks of police, infested with brainwashed Common Purpose automatons better suited to social work.

As Stephen Glover pointed out this week, the BBC has reinvented itself as the official broadcast partner of Black Lives Matter, churning out endless propaganda portraying Britain as a racist hellhole. Meanwhile, so-called ‘news’ programmes like Newsnight spew anti-Boris, anti-Tory bile daily.

Most schools remain closed because the teaching unions refuse to return to work, for purely political not safety reasons.

Education is the proven way to get young people out of the ghetto and into the professions.

But it is kids in the Labour-controlled inner cities who are hardest hit by the continuing closure of schools. Clearly black lives don’t matter at all to the hard-Left leaders of the National Education Union.

Spoilt, white middle-class students take time off to march against racism, deface and destroy public monuments and spout hatred against the police.

Black Lives Matter militants demand change, but when pressed are airily unspecific as to what, precisely, that means. Yet Tory ministers abase themselves before this flailing mob.

They have also given in to the ‘green’ fanatics exploiting the pandemic to advance their own deranged agenda, even though the effect on our already emaciated economy will be ruinous.

Teenage Chancellor Rishi Sunak basks in widespread praise, even on the Left, after discovering there is a magic money tree after all. Half the country is enjoying an extended, all-expenses-paid summer holiday on the taxpayers’ tab.

Giving cash away is the easy bit. Let’s see how popular Dishy Rishi is once he has to stop everyone’s pocket money in October. By then idleness will have become a way of life. Millions won’t have a job to go back to.

Boris and his predominantly wet-behind-the-ears Cabinet seem incapable of pushing back against this tidal wave of institutional Left-wing bias. Michael Gove may have identified ‘the Blob’ but he has gone missing in action. Maybe he’s keeping his powder dry, hoping Boris implodes.

Ministers boast hubristically about their ‘world-class’ this and ‘world-beating’ that. But the only thing we’re beating the world at right now is the number of Covid deaths.

Boris may model himself on Churchill, but in truth he is Churchill In Reverse. Winston recovered from his lowest ebb to lead Britain to victory.

Even allowing for his coronavirus confinement, those of us who have supported Boris must admit that he has been a hopeless wartime leader up to now.

After the triumphs of Brexit and the General Election, it’s been downhill all the way. If Covid-19 is a remake of 1939-45, Boris has failed the audition.

The country is teetering on the brink of anarchy. The statues fiasco may well be our starter for ten.

As I said, there’s madness in the air. We could be facing a long hot summer of mayhem and civil unrest.

Unless Boris can rediscover his inner Churchill and quickly, the violence in Whitehall and Hackney may simply be harbingers of much worse to come.

Now that the Labour leader has landed a regular phone-in slot on LBC radio, will I have to start calling him Max Headphones?

Hard-Left agitators and their useful idiots in local government have vowed to rid Britain of all monuments and street names they find offensive.

How long do you think it will take before they to get round to this one in Orpington, Kent? 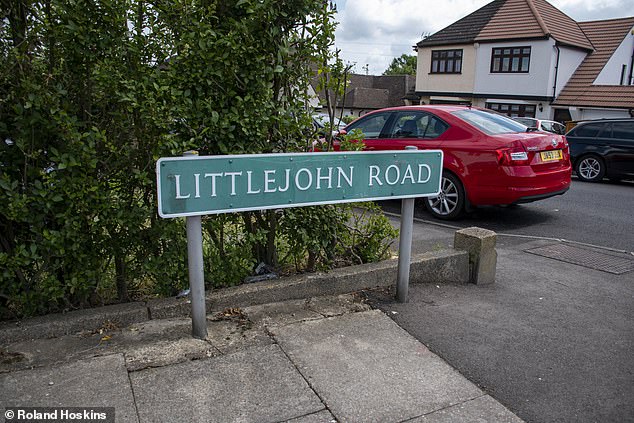 With offensive statues and street names being taken down… what will the British public this about this one remaining in place?

Here’s a plan to solve the Rhodes Must Fall stand-off in Oxford. Instead of toppling the statue, couldn’t they just change his name to Cecil Zimbabwe?

On the day they watched a mob tear down the statue of Edward Colston in Bristol, without making any arrests, the bold Avon and Somerset Plod raided a home in Frome and fined three people for breaking lockdown.

Mind how you go.